On the 20 th morning, though I was way tired for the lack of overnight sleep. I still made up my mind focused for the first days real hill drive ahead. There were two same distant routes.One goes through ‘Kaladungi” and “Nainital” and the other goes via “Ramnagar”. There were no specific reason to take the route via Nainital, hence we took it but if someone likes to avoid the mall road traffic of Nainital. So can avail the Ramnagar side and if one starts up early then can avoid the Ramnagar central area”s traffic also, most of the tourists goes by that road. so we took the road via nainital.

Bail Parao to Kausani via Nainital and Ranikhet

It was a quite drive through the foothill of the Jungle initially and had a few traffic as I said the most used to avail the Ramnagar side. slowly the roads began to create numerous bends with very few occasional road patches.

The first gimps of hill beauty particularly of Himalayan characteristics since the journey started, coming up by the road side as we assented through the bends with lots of greenery and many view points, even on the way we got so much applauded by the scenic beauty that sometime we stopped to take snaps. As we neared Nainital, the bends made my junior felt dizzy and in one or two occasions we stopped by the side of the road to overcome his sickness.

First came the glimpse of “Lake Khurpatal” but I was so busy for the days coming up schedule that I just concentrated with the drive. As the city came nearer so the traffic began abruptly and intensified when we reached near Mall road. Frankly I was not expecting that much traffic.

The summer vacation in most schools was started or yet to start that time which made the parents moved out from the pockets of hot places to shooting Himalayan climate.As our schedule was planned before for Nainital on the return journey from Munsiary and all, so we didn’t take the halt over there more over it was morning only and we already had our breakfast before starting from our stay at Corbett. 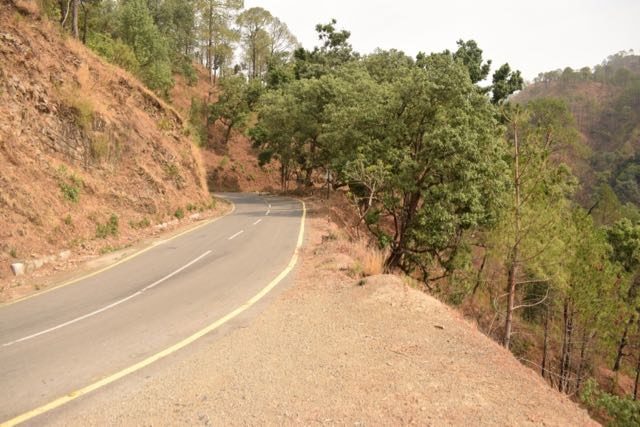 As we moved on through NH 109, which is named “Bhowali-Almora Road” the traffic became moderate up to the junction where NH 109 went right and we took “Bhowali-Ranikhet road”.The easiest way to reach Kausani is to take NH 109 and avoid Ranikhet but we previously planned to touch Ranikhet and to had the lunch and see the famous golf course over there to reach before Kausani.

So we took left to “Khairna Bridge”of  Chhara”. From there Ranikhet was not very far. River Kosi danced far below sharing our side to few miles clearly from “Khairna Bridge” which actually started from “Dhuna” area long before. After the bridge the road became nice with very few crowd and limited traffic, the very good road condition gave me a nice feel of hill drive.

Khairna bridge- on the way to Ranikhet

Ranikhet (1,869 m), is famous for Army Hospital, Naga regiment and Kumayon Regiment. The hill station has a long associated history of Kumayoni rulars which invaded by the British rule later on, where they made it a cantonment for their troops. 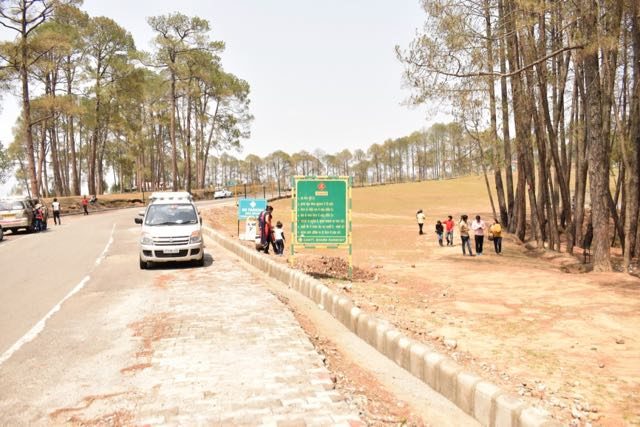 The golf course located only 8 kms from Ranikhet city area and on the way to “Majkhali”. One can’t miss it and it’s a must visit place at Ranikhet. The golf course is well maintained by the Kumayon Regiment. It is surrounded by the pine trees, a very tranquil place to relax inside the foliage of tall trees, good for children to enjoy.

It was 1400 hrs and I was expecting a maximum 90 minuets drive to reach Kausani, while taking via “Dwarahat-Almora-Kausani Road”.There was another affiliated broad road which goes through NH 109 named “Gopeswar-Almora Road” and of 66 kms. Back at home, when I was trying to chalk out the road for the entire trip, I came to know from some roadies about a so called  haunted road, which goes from Ranikhet to Kausani.

Well, as there was no actual road diagram to indicate that precise road but the road I chalked compared with the diagram given by the fellow travelers it was the “Golucchina, majkhali-Someswar Road”, through “Kesta” which merged with “Someswar- Ranikhet- Almora Road” near “Sakat”. I read one of the traveler actually followed that road also, purposely, which was a total desolate jungle road and no human habitat nearby, the said trees were crooked by some supernatural power and covered the stretch eerily.

Locals said there is a sure possibility of leopard sighting, if one wish to cross at night, it is said that there is something which enables travelers to lost directions. All the described roads met at Someswar point and then straight to Kausani.The “Dwarahat-Almora-Kausani road” gave us a wonderful landscape few miles before entering Kausani and before entering the last lag we stopped at a pump to refill. It was almost 1600 hrs when we took the last left turn to reach our destination “Hotel Uttarakhand”at Kausani.

Years back Kausani was the famous picturesque splendor with 300 kms panoramic view of Himalayan range. There were only few places to see the amazing snow crested show of  “Trishul, Nanda Devi, Nandakot and Panchchuli peaks”. There were very few places in Himalayas whose beauty can be compared that that of Kausani. But nowadays pollution even reached these places also the far away peaks were not so bright and near looking, as it was back then.

One can view those peaks more soulfully by reaching Munsiyari nowadays.With a total area of 5.2 sq. km, situated at a height of 1890 m above sea level, located 51 km north of Almora, Kausani is the birthplace of famous Hindi poet “Sumitra Nandan Pant”, who wrote some of his memorable poems in praise of this paradise on earth.

In 1929, Mahatma Gandhi stayed here for 14 days at the “Anasakti Ashram” while scripting his book titled ‘Anasakti Yoga’ and was greatly impressed by its environs.I was expecting more crowd than we faced at Kausani. The place is now packed by many adventure sport like trekking, rafting, Para gliding, camping, mountain biking etc. Though we were destined to move for Munsiyari next day on 21 st May. But Kausani still holds the ambience the splendid memory of nature so halted at the spot.

Evening came with plenty of clouds to the east, overcasting the peaks and it started raining. As we came from the near by market after filling up some of our supplies and a short troll. Rain in the hill causes depression to me, also the sound of thunder. The chill wind gave me little uneasy thinking for the next days journey to Munsiyari. Rain continued for two hours, we had our dinner for the night. 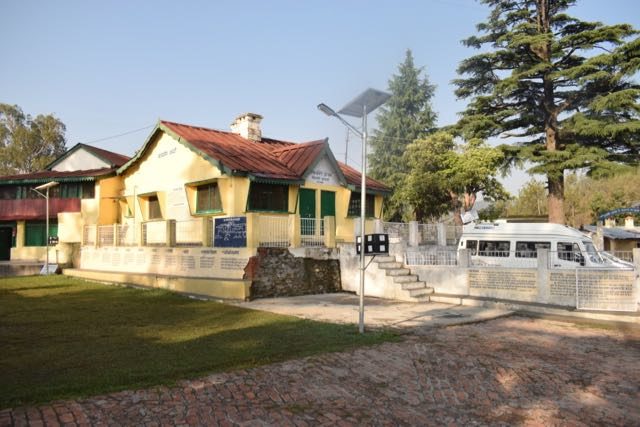 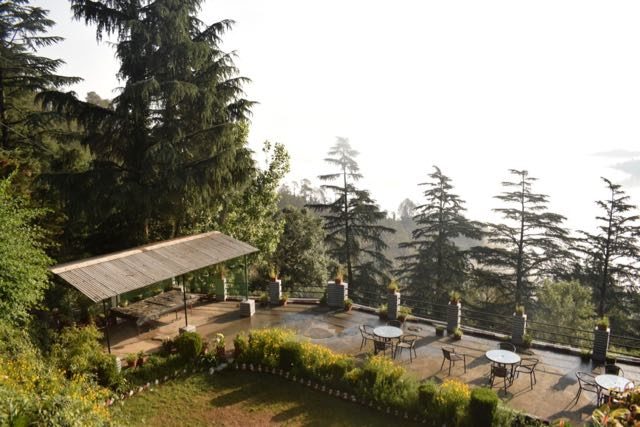 The morning was sunny, with the promise of a great day ahead. We woke up early to watch the sunrise from the balcony of our room. Also took some snaps before went for “Anasakti Ashram” also known as “Gandhi Ashram”. The Ashram has a prayer chamber, a small museum and some living places. There is a location indicator guide in the premises for the “Trishul” and all the peaks to see on the far side of the mountain.

Years back in my younger age I visited this place but didn’t see those charm during our current visit, didn’t find the marigold and other seasonal flower garden within the premises, also the place was quite remote, so with its adequate virginity back then.Lots of hotels mushroomed at the place, step by step till the view point. We completed our morning schedule, had our breakfast and started for Munsiyari at around 0830 hrs.

Kolkata to Kumaon – Corbett to Kausani via Ranikhet was last modified: July 10th, 2017 by Debjit Chakraborty

So with full gusto, I rev-ed the engine and started back amid beautiful landscapes, away from the thoughtful and calm gaze of Panchachuli, the peak which was in the back yard of our stay. The journey from Munsyari to Birthi was spent gazing at mountains, standing tall and quite, looking at the occasional habitat along side the road with Pahadi folk wearing black topis, half jacket over long shirts and pajamas and throwing infectious smiles as they go through with their daily chores. Because of rains, the road was not in its prime so we were a tad cautious; but there was an natural desire to drive a little faster and be able to reach Sattal, which as per our friends from Pahad was not a realistic goal.