Welcome to the God’ own Country – Kerala (India)

I was in Kochi from 19.08.09 to 24.08.09 to attend a conference in Hotel Le – Meriden. Morning to evening I had to be busy with the conference and time was a big constraint for me to explore this new city. So I took the help of some of my Ghumakkar friends for visiting this place. Special thanks to Nandan, Kartik & Sandeep Jose. 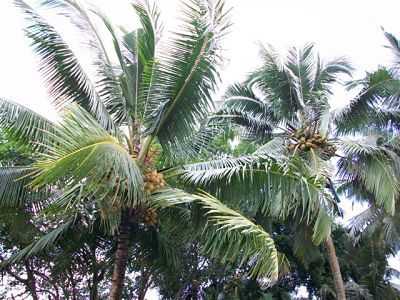 Kochi – Formerly known as Cochin, one of the most visited tourist place in Kerala. It is one of the principal Seaport of India with Portuguese, Dutch, English and Chinese influences. Kochi was an important spice trading centre on the Arabian Sea coast from the 14th century onwards. It was occupied by the Portuguese in 1503. 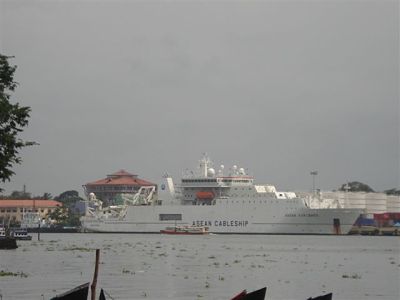 Kochi is right place to stay to access the tourist places of Kerala.

Kochi is a package of beaches, backwaters and greenery altogether.

We started our journey on 19.08.09, our flight was at 12.45 PM from Delhi Airport (Terminal 1-D), and it’s a newly constructed terminal. The interior could be compared to any International Airport. Some of the pictures of new terminal are attached. 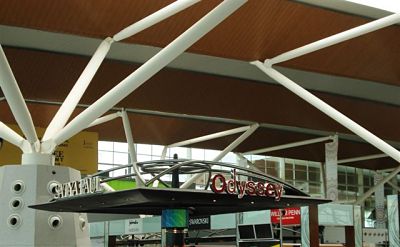 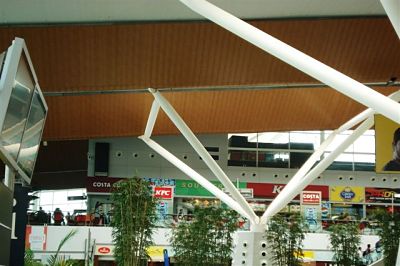 We reached Kochi Airport by 3.30 PM, the structure of Kochi airport is well designed. Near by area of airport is full of greenery. Some of the pictures taken from flight could be seen here. 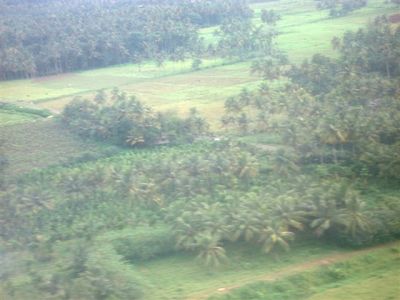 Near by area of Kochi Airort 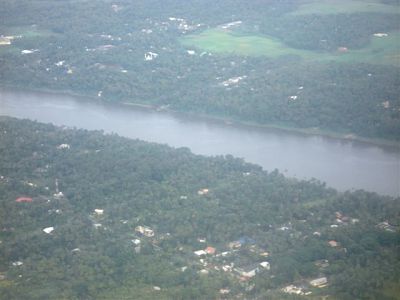 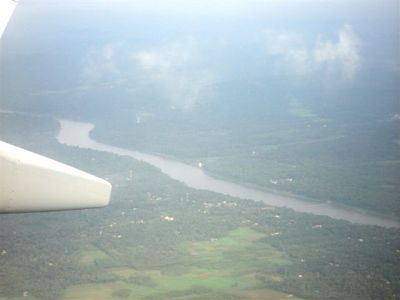 By the time we collected our luggage & the taxi was arranged it was 4.30 PM. Directly we left for Hotel Le –Meriden where we were supposed to attend the conference from next day. We unloaded our conference stuff there & reached our Hotel – Metropolitan, near south Railway Station. There are two major Rail station in Cochin( Ernakulam Town and Ernakulam Junction, locally known as North and South railway stations).

We had our Dinner in Hotel – Metropolitan only, Hotel was celebrating Nadan food festival, and there we relished Keralite food.

As soon as the conference got over at 6.00 PM , we left for our hotel , traffic during office hours was horrible , we reached our hotel in one hour instead of 20 mins. We reached our hotel by 7.30 pm & left for Marine Drive, by the time we reached there it was 8.00 PM.& boating had been closed. Somebody suggested that we could use passenger boat for to & fro. 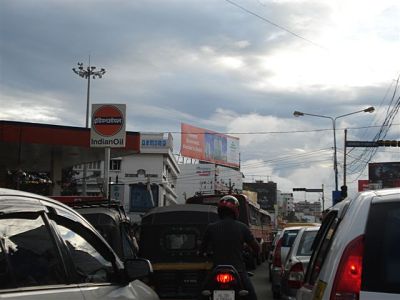 The Boat Jetty at Marine Drive operates ferry and boat services to the various islands across the lake, it is run by KTDC. We decided to go upto fort cochin, I was really surprised to know the fare, it was just Rs.2.50/- per person (one way) it took us 15 mins to reach the Fort Cochin. We returned Marine drive by the same boat and decided to come back again tomorrow for tourist boat ride. 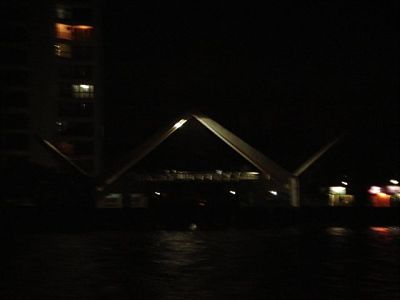 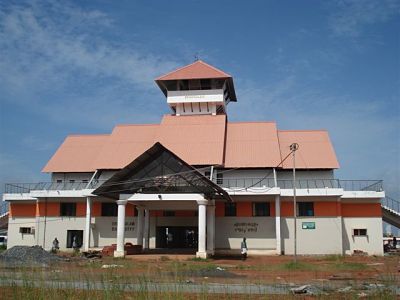 Marine Drive – A popular hangout place for the tourist , this scenic offers a beautiful backwaters & the Kochi Harbour. Here one can enjoy the view of nearby Islands as well as the merchant ship & the cruise liner halting for fueling. It is the main business & shopping area. 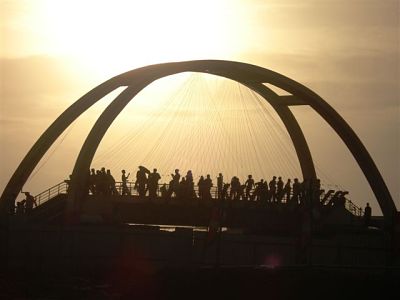 21.08.09 (Marine Drive – Tourist Boat Ride)There was no rain that day, we reached our hotel on time, just dumped our bags & rushed to Marine Drive. We reached on time , boat ride with a guide was a nice experience. As it was dusky Rainbow Bridge was looking amazing. 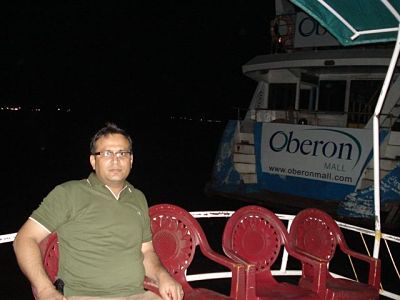 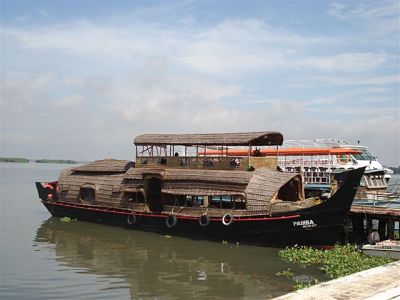 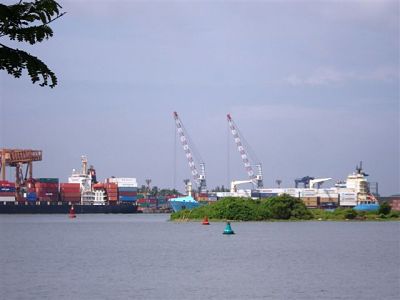 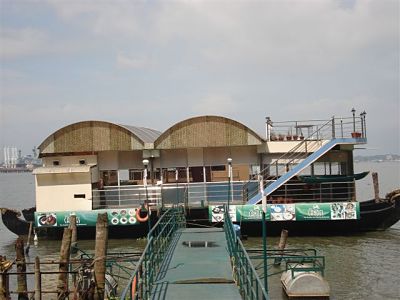 22.08.09 (Bolgatty Palace & Basilica of our lady of Vallarpadamport)

Bolgatty Palace one of the oldest existing Dutch Palaces outside Holland. A Dutch trader built this quaint mansion way back in 1744. In 1909 the palace was leased to the British and it served as their residency till 1947 when the British Raj came to an end in India. Bolgatty palace is converted into hotel & it’s a Heritage property of Kerala Tourism Development Corporation.

There were lots of trees in front of the entrance of the hotel, the photograph of the palace couldn’t be captured from the front. I clicked the back view of the palace. 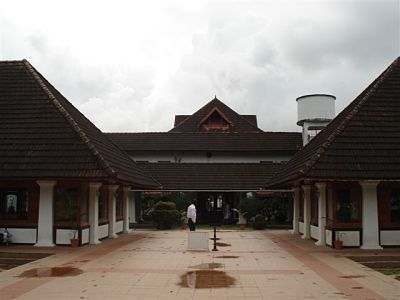 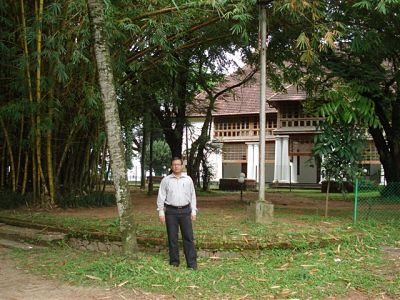 Basilica of our lady of Vallarpadamport – A beautiful church I have ever seen , Portuguese Missionaries, the Vallarpadam church is dedicated to the Holy Spirit. The venerable image of St. Mary and Infant Jesus here, was originally installed at the top of the main altar, before the church was destroyed in the heavy floods of 1676. Paliyath Raman Menon, the Dewan of the Maharaja of Cochin, retrieved the image of Holy Mary and infant Jesus from the flood waters

Basilica of our lady of Vallarpada

Basilica of our lady of Vallarpada

Rosary Park – VallarpadamNow there is a new Rosary park in front of the church with a walkway which has sculptures and paintings featuring the four Mysteries of Faith celebrated by Catholics all over the world.

The Rosary is divided into five decades. Each decade represents a mystery or event in the life of Jesus. There are four sets of “Mysteries of the Rosary” (Joyful, Luminous, Sorrowful, and Glorious). These four “Mysteries of the Rosary” therefore contain, a total of twenty mysteries. The Joyful, Luminous, Sorrowful, and Glorious Mysteries are then said on specific days of the week
The Joyful Mysteries (Said on Mondays, Saturdays, Sundays of Advent, and Sundays from Epiphany until Lent)

The Sorrowful Mysteries (Said on Tuesdays, Fridays, and daily from Ash Wednesday until Easter Sunday)

The Glorious Mysteries (Wednesdays, and Sundays throughout the year)

The Luminous Mysteries (Thursdaysthroughout the year)

The Govt. of India declared Vallarpadam a major pilgrim centre of India in 1951.The Govt. of Kerala declared the shrine a tourist centre in 2002. The Church was declared a National shrine in September 2004 by the Catholic Bishop’s Conference of India. 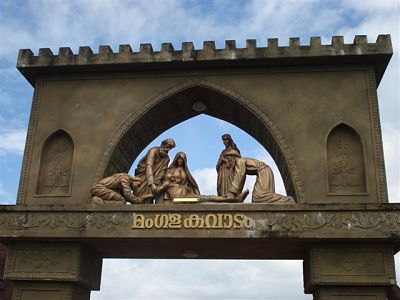 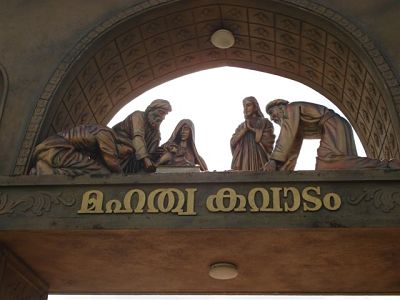 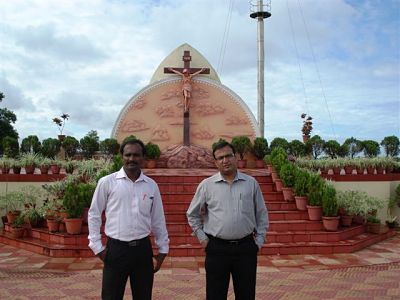 Thats all from me and I would write the rest of it shortly. Hope fellow Ghumakkars would have enjoyed the pictures.