Krishna said in Bhagavat-Gita: “Amongst rivers I am Ganges” and all over the world you will hardly find a river more worshiped and more sacred than Ganges.

In the Morning we checked out from Hotel Shivalik – Dharali & left for Gangotri at 6.00 AM. 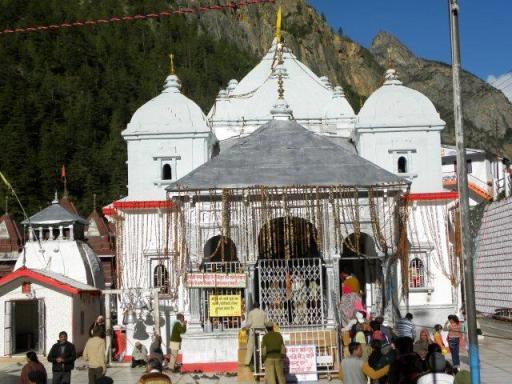 Ganga —— The Ganga, our National river is the largest river of Indian subcontinent , flowing east through the Gangetic plains of northern India into Bangladesh. The 2510 Kms river rises in the western Himalayas in the Uttrakhand . The average depth of the river is 52 feet & the Maximum is 100 feet. 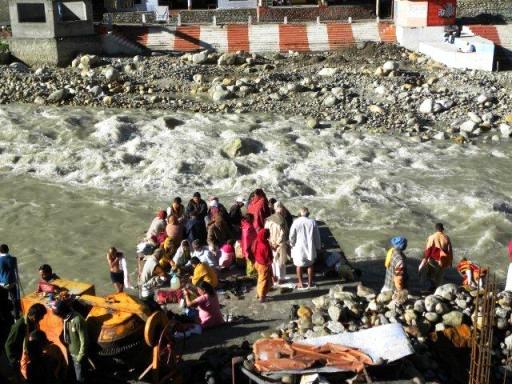 Several places sacred to Hindus lie along the banks of the river Ganga, including Haridwar, Allahabad and Varanasi. During the Loy Krathong festival in Thailand, candlelit floats are released into waterways in honouring the Buddha and the goddess Ganga for good fortune and washing away sins. 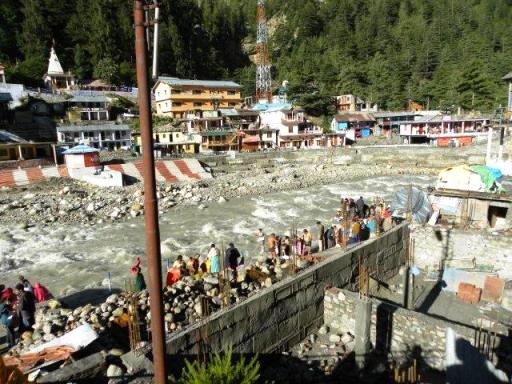 Ganges is the ultimate adventure point as far as river rafting in India is concerned. And the major rafting site from where any experienced rafter as well as an amateur one would love to start of his rafting trip in India is Rishikesh.

Gangotri ——– It is situated at the bank of river Bhagirathi in Uttarkashi District of Uttrakhand located at a height of 3042 meters from the sea level.

Gangotri is the origin of River Ganga and one of the four sites in the Chardham Yatra. Here, Ganga is known as Bhagirathi, named after the ancient king Bhagirath, who performed penance to bring her down from the heavens. It is believed that bathing in her waters brings deliverance from sins committed in the present and past births. Onwards Devprayag It acquires the name GANGA where Bhagirathi meets the Alaknanda. This temple was made with white stone by Amar Singh Thapa, Gorkha captain in the early 18th century . After Diwali the door of the temple are closed & reopened in May. During winters when Temple is closed due to the heavy snow fall , the idol of the Goddess is kept at Village Mukhab village near Harsil. 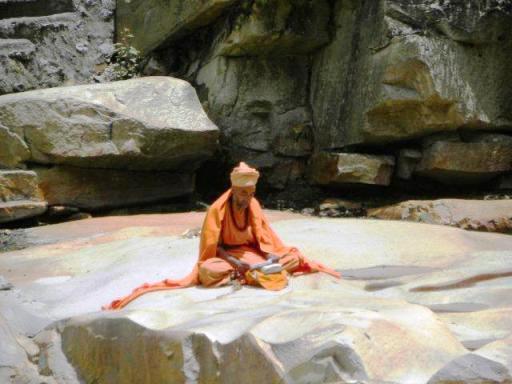 The actual source of Holy river Ganga is at Gaumukh, set in the Gangotri Glaciers and is a 19 Kms trek from Gangotri.

According to Hindu mythology, Goddess Ganga – the daughter of heaven, took the form of a river to absolve the sins of King Bhagirath’s predecessors, following his severe penance of several centuries. Lord Shiva received Ganga into his matted locks to minimize the impact of her fall.

According to legend, a Suryavanshi king Sagar decided to perform the Ashwamedh Yagna (horse sacrifice). His 60,000 sons conquered the territories that the horse crossed. Indra felt threatened by their success. He stole the horse and tied it in Kapil Muni’s ashram. Sagar’s sons followed the horse into the ashram and were disrespectful to the seer, who cursed them. All 60,000 of them were turned into ashes. The king beseeched the seer for forgiveness, but the curse could not be reversed. However, Kapil Muni suggested that if the holy Ganga, the river of heaven, were to come down to the earth, the touch of her waters would ensure the deliverance of the princes. Many descendants of Sagar failed in their efforts to bring the holy Ganga to earth, until Bhagirath was born. He persevered in his prayers until Ganga agreed to come down to the earth from the heavens. But such was her power that her descent was sure to cause havoc. Thus Bha¬gi¬rath prayed to Lord Shiva, who agreed to contain Ganga in his locks, from where he released a few drops of her celes¬tial waters. The river thus flowed on earth, cleansing all that was impure in her path and delivering the sons of Sagar from their curse.

It is believed that shraadh and pind daan can be done on any day of the year, and once performed on the banks of Bhagirathi for their ancestors. Most of the pilgrims collected Water (Ganga Jal ) for use during auspicious occasions at home

The temple opens on the day of Akshay Tritiya (May) and closes down on Yama Dwitiya or Bhai Duj . It is better to check timings before reaching the temple remain close for the public during utthan (awakening) and Shringar at 4.00 Am , Priests perform a mangalaarti at 6 am, also behind closed doors. At 9 am, the temple is closed for 10 mins for rajbhog; at 6.30 pm for 10 mins for Shringar; at 8 pm for 5 mins again for rajbhog.

A special shringar puja is performed on Ganga Saptami in Vaishakh (April), when Ganga is said to have descended to earth. Ganga Dussehra, which celebrates the birth of Ganga as the day on which Lord Shiva offered Bhagirathi to Bhagirath, is in Jyeshtha (May). Village deities are brought in palanquins from around the region to participate in a procession, in which the golden crown of the deity at the Gangotri Temple is taken, led by a statue of Bhagirath. A havan is performed near the riverbank.

After visiting the main temple , we reached Bhagirath Shila , it is the rock on which King Bhagirath had meditated, is located near the temple of Ganga. Even today it is widely believed that water of holy Ganga is believed to have nectar in it. Even scientists have concluded after research that the water from Ganga at its origin is in a pure state and remains uncontaminated even after being kept for several years on end. Secretions of herbs and mineral content from the Glacier which mix with the water, give Ganga Jal.

On the Bank of river we offered prayer to Holy river Ganga & collected Ganga Jal in a container purchased especially for it. 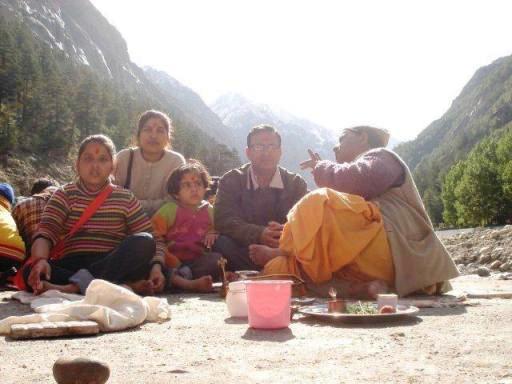 There is a Shivling which is submerged in the river, this natural rock Shivling is the place where, according to mythology Lord Shiva sat when he received the Ganga in his matted lock. It is visible in winter months when water level decreases.

Half a kilometer ahead on the left side while going back from main temple there is an iron bridge to cross where one side of it is Gauri Kund & other side is Surya Kund. 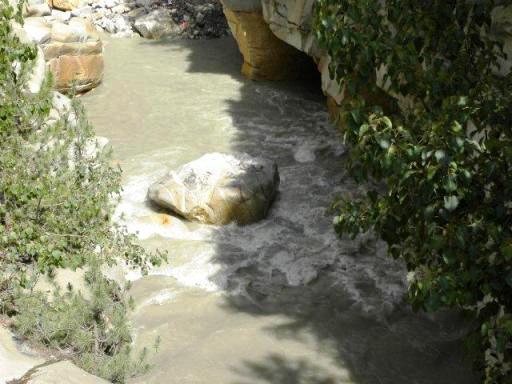 Surya Kund is one of the main attractions at Gangotri , there is a picturesque Surya Kund waterfalls. The waterfall at Surya Kund is a spectacular sight with two main falls. The vibrant sound of the river was a breathtaking experience. 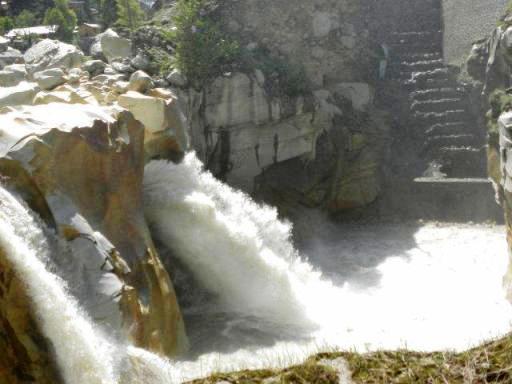 After enjoying the beauty of Surya Kund we proceeded towards Pandava Gufa (cave) , where Pandavas are told to have meditated on thier way to kailash. It is around 1.5 – 2.00 Kms from Gangotri. The surrounding near the Gufa (Cave) was very so peaceful and mesmerizing. We met one sadhu inside the cave who told us about his half year stay inside that cave as due to the heavy snow fall there during winters he is forced to leave the place and move to the nearby village. Whole Gangotri is covered with snow .

On our way to Pandav cave 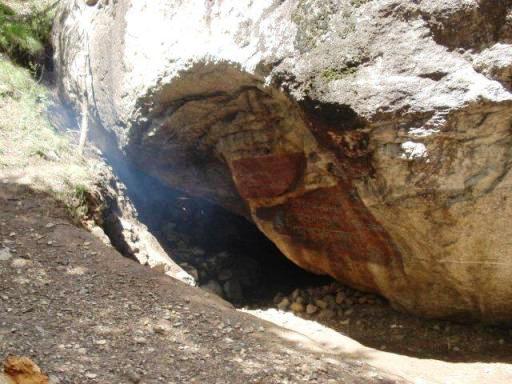 Sadhu inside the Pandav Cave 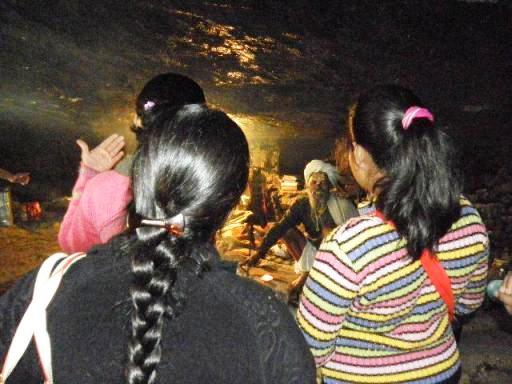 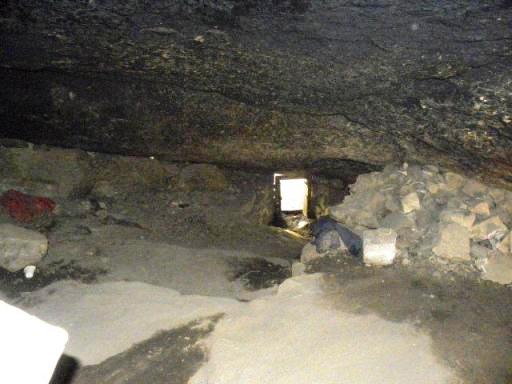 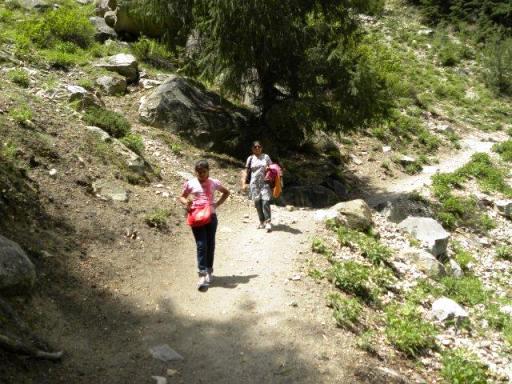 Coming back from Pandav Cave

After visiting Pandav Gufa we came back to Gangotri & purchased some souvenirs from the street market of Gangotri. 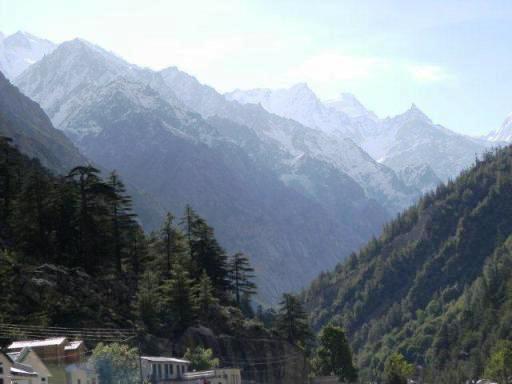 From Gangotri we reached Nathala in the evening where we spent our last night of the trip.

Next day morning we checked out from Hotel & proceeded further towards Dehradun. My last post of this trip about some of the spots on the way to Dehradun like Tehri / Chamba / Surkanda / Dhanaulty will be coming soon. 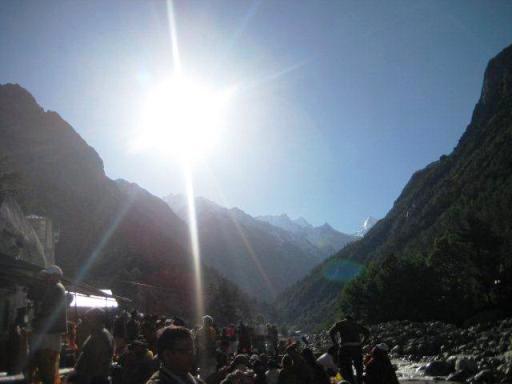 Sun rays on the peak of Himalyas , touching my nose too

Pet puja done, we moved on past Channapatna(famous for its toys), Mandya and at 10.30 AM reached SriRangapatna, a place of great religious, cultural and historical importance. Located 20 kms from Mysore City, the entire town is an Island enclosed by the River Cauvery. The town gets its name from the famous Sri Ranganathasamy Temple. The temple, one of the important Vaishnavite pilgrimage centres was built in the 9th Century and is a mix of Hoysala and Vijayanagar styles of Architecture(Thanks:Wikipedia).