I have been offline for quite some time and so much has happened on Ghumakkar! Looks like everyone has been busy travelling. Many interesting blogs and so much to catch up on my reading!

My last trip was back in May, inspired by a couple of Ghumakkar blogs on the Spiti Valley in Himachal Pradesh. I flew in from Bangalore to Delhi, spent a couple of hours in the capital before proceeding to Shimla. With a night halt at Kalka, I arrived at Shimla the next morning by bus. Apart from the aging and paint-stripped buildings of the colonial period, Shimla was uninteresting. The crowds were everywhere. The garbage was ubiquitous. At a quiet stroll in the evening I was chased by a troupe of monkeys. It was difficult to say if they were chasing me or recognized me as their leader; but I ran. 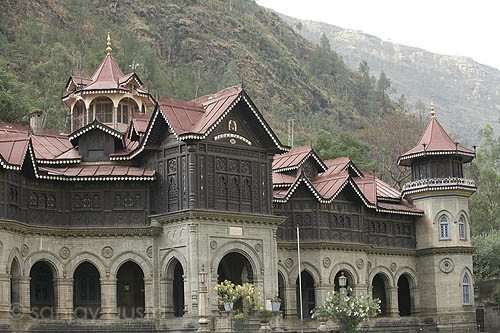 I continued my journey north by bus, stopping at various villages and towns along the way – Nirath, Dutt Nagar, Rampur and Sarahan. The first two are interesting for some old temples. The Padam Palace at Rampur was full of celebration because just the evening before Congress candidate Veerabhadra Singh had won his seat from Mandi, the only Congressman to win from Himachal. Sarahan has a large Bhimakali temple with architecture influenced by local styles and Buddhism. I stayed at Sarahan, my room overlooking the majestic Shrikand range of snowy slopes and peaks tinged in a subtle warm glow of sunset. I had a refreshing hot water bath, after three days of cold baths. 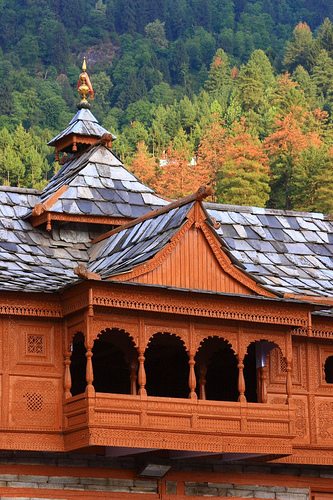 For most of the day from Narkanda to Sarahan the route follows the majestic Sutlej. The bus winds along a thin strip hugging the rugged cliffs. The river is down below, gathering in its flow the melting snows of the higher slopes. In this inhospitable place, the river is beauty, life and love. After an entire day of following the Sutlej upstream, you are in love with it.

Leaving Sarahan, I arrived at Recong Peo early enough and checked into Saurang Inn. The 70-year old owner of the inn complained how global warming had resulted in low snowfall last winter. This had left the ground dry. This season all his apple orchards are going to give low yield. So we can all expect high prices for apples this year. A short excursion to Kalpa gave me a glimpse of Kinner Kailash, a little piece of rock that looks like a shivalinga. Supposedly, it changes colour with the hour of the day.

These are all like appetizers for the main meal in Spiti Valley. To reach Tabo from Recong Peo is a mightly long journey. The bus was packed and I was lucky to get a seat. The people look different. They dress different. Merchants and coolies form the common crowd. You are recognized as the wandering tourist. In your turn, you feel you are leaving India for some place exotic.

We stop briefly at Hurling for lunch. The bus empties in a flash and fills up the restaurant. A standard lunch of steaming rice, dal, rajma and cauliflower is served around quickly. I sit with two Nepalis and quietly have my lunch. Amidst a hive of conversation in various tongues, the clattering of plates, the heat and hiss from the kitchen, the stomach is quickly filled up. Just as quickly the bus fills up and we are on our way.

Entering Spiti Valley is an awesome experience. The bus climbs to impossible heights in the company of rugged cliffs, desolate landscapes and white-tipped peaks. When we finally meet the Spiti river, we are just about entering the Spiti Valley.

The Buddhist monastery of Tabo is world famous. I checked into the monastery’s dormitory along with some Japanese, German, Israeli and Spanish tourists. We had all arrived at Tabo by the same bus. At Tabo, it is difficult to justify in writing the wonders of this place. Is it the unique and uniform architecture of stones, mud and rubble that captivates? Is it the hospitality of the monks and the peace that reigns on their faces? Is it the wonderful stucco sculptures and colourful wall murals that have been around since the 10th century? Is it this little lonely spot of greenery in a desert-like terrain, flanked by rubble strewn slopes and rugged cliffs that uplifts the spirit with hope? 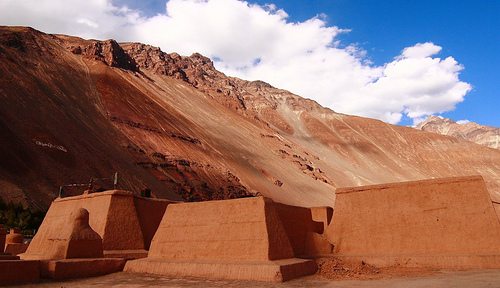 I stayed at Tabo for two nights. The German tourist and I went on a 5-hour hike on the second day, witnessing some wild and pristine mountain scenery, not to mention a yak farm dedicated to preserving a rare sub-species of the yak found only in the Spiti Valley. For two mornings I participated in the prayers at the monastery for which all are welcome. It is a spiritual experience but to really get something out of it you have to let go of your prejudices and rigid beliefs. You have to give into the chanting of the monks, the smell of the incense and the occasional clang of the brass gong. You have to realize that you are sitting in a hall built a thousand years ago, the very place where the early monks once sat, prayed and meditated. Sitting cross-legged at this prayer in the dim light before sunrise, you are conscious of the expressive eyes of Maha Bodhisattavas and Bodhisattavas, of Buddhas and Dhaina Buddhas, looking down at you with compassion from their elevated seats on the monastery’s mud walls. 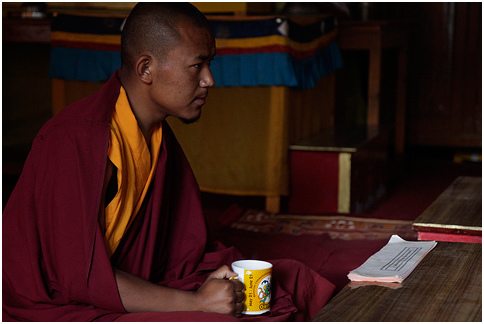