So folks , it was 4th day for we people in Srinagar and covered a few places in these 4 days sans the popular spots of Gulmarg and Pahalgam and still these places were not in our radar . The plan for the 4th day was to  visit S SHANKRACHARYA TEMPLE, CHASHM-E-SHAHI and SHALIMAR BAGH.  We were ready at about 9.30 A.M including kids off course and taken our seats in our trusted Qualis and Mr. Bhajji had been duly instructed to proceed towards the famous SHANKRACHARYA TEMPLE where a part of the famous song JAI JAI SHIV SHANKAR had been picturised on superstar Rajesh Khanna and Mumtaz in movie AAP KI KASAM.

Crossing the Boulevard road one comes across a barrier/ check post where an intensive search takes place the number of vehicle duly noted and when we would come back (approx. time) is asked. It is pertinent to mention here that this temple is under intense security cover. After driving for about 10 minutes uphill/steep uphill , we reach the point where all the vehicles are parked and one has to walk , firstly til the stairs and naturally the the stairs shall take you to the point where the revered temple is situated. Due to heavy rush we had to park our vehicle quite far away and had to walk a little longer. Our mobile phones were intact in our pockets and when we reached the first stair , security persons  politely told us that cameras , mobile phones and purses were not allowed. Oh God… was my reaction and now who was to go back and deposit all these things with Mr. Bhajji, our driver. I think Vishal took the initiative and decided to exercise a bit more. Meanwhile other members carried on with the stair part and it was decided to meet Vishal near the main gate of the temple.

Pavani and her mummy negotiating the slope to Shankracharya temple

A WORD ABOUT THE TEMPLE…

At about 1100 feet Shankracharya hill looms large over the magnificent Srinagar city and the meaning of valley becomes clear , totally clear. More than 2000 years old this ancient temple dedicated to lord Shiva is a prominent landmark of this hill. Form of Shiva, JYASTHESWARA is worshiped here. Kashmiri Muslims call this hill as Takht-i-Suleiman or throne of Solomon. The temple is said to be built by the king Gopaditya in 4th century A.D and a village named Gopkar towards southern direction near the foot of this hill corroborates that. The temple built in grey sandstone looks like a monolithic structure , the pattern being similar to that of monolithic Ratha temples of Mahabalipuram. The interior of temple is a circular chamber about 15 meter in diameter and roof is flat. The Garbha Griha consists of a Shivalinga with coiled serpent around it. From the top of this hill , from the point where the temple stands one can have a magnificent view of Srinagar and just soak oneself into the beauty of the city. All of us rested there for a while . There was huge rush that day at the temple and many families being from Rajasthan as their attire indicated  were proving the point of vibrant India in Srinagar. The way back to the vehicle was a sitter, very easy , downhill all the way, there we go.Now our plan was to go to Chashm-i-Shahi, the beautiful garden. 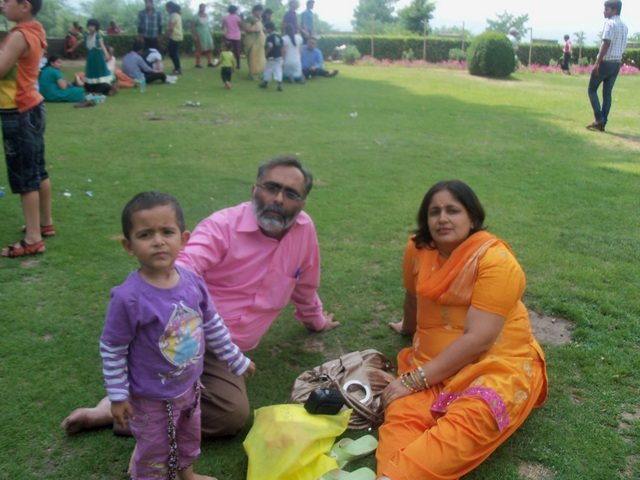 So folks we all know that Kashmir is home to many beautiful gardens built mainly during Mughal era and Chashm-i-Shahi is also one of those beautiful gardens built during the reign of Shahjahan. It is actually Ali Mardan the Iranian in charge of province of Kashmir deputed by Shahjahan who actually built this beautiful garden. It is a beautiful garden with an enclosed Chashma at the far end of the garden and people filling the pet bottles there of cold and medicated water as some people believe this water to be…… An anecdote is there of our first prime minister Jawahar Lal Nehru of fond of this water so much that this was especially brought down for him frequently. 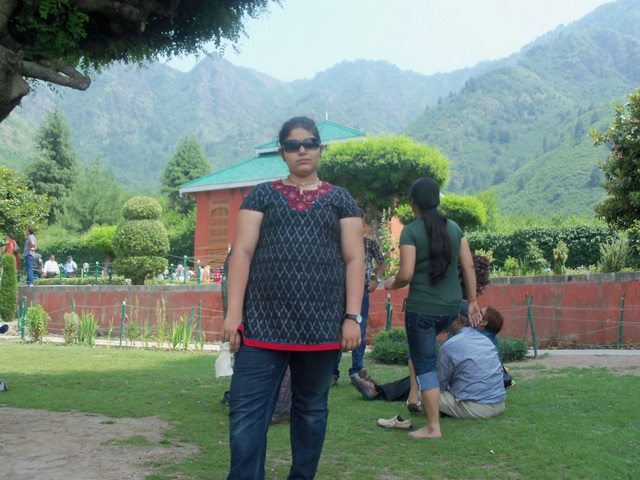 Before entering the garden all of us feasted upon the good old softy, that machine oozing out ice-cream in a paste form , vanilla flavour near thye entrance of this garden. Many souvenir shops and eateries graces the entrance of the garden. 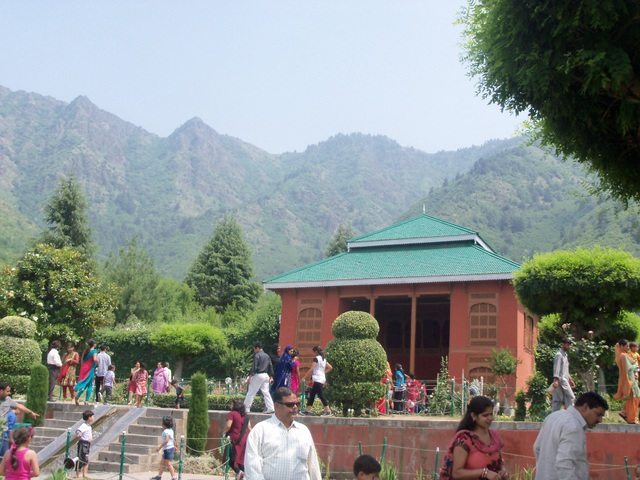 Another view at Chashm e -Shahi

Chashma Shahi garden though small has its own grace and heart of its own and maintain its dignity and charm in front of more famous Nishat Bagh and Shalimar Bagh. We can say , a pocket size dynamite that engulfed the visitors with its charm. The garden shows the same Mughal feeling as the bigger gardens around the lake. The spring around which this garden is built bumbles up in a large stone vase that hovers up in a hall like structure and this is specialty of this garden. The garden and the hall like structure is based upon Afghan styled architecture and is good to look at if not marvelous  We spent some time at Chashma Shahi . Far away another structure (Pari Mahal ) was visible but after discussion with ech member of the party it was decided not to visit that place instead a plan was made to go to the original royal garden, Shalimar Bagh.

SHALIMAR BAGH: The garden is at some distance from Chashma Shahi and is currently under the command of your Highness, the royal family of Kashmir. That said, that means that still the garden is  a royal one as was at the time of Mughals, the original royal garden The garden boasts of the most beautiful fountains and a sense of mystery attached to it somewhat. It might have baaen the perfect summer retreat of Mughal emperor Shahjahan as the inner buildings inside this garden indicate. 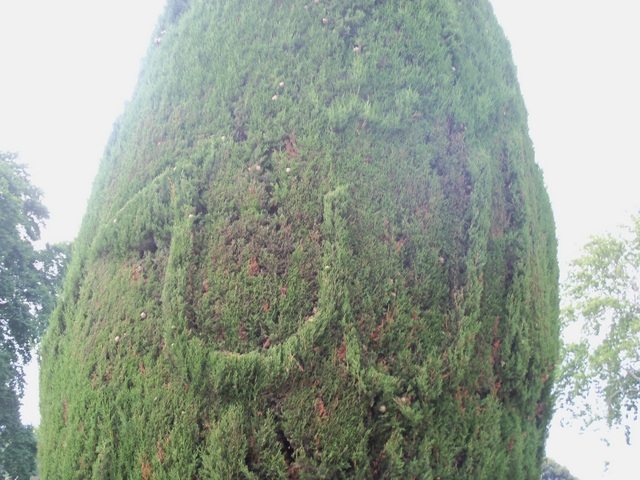 Calligraphy at its best 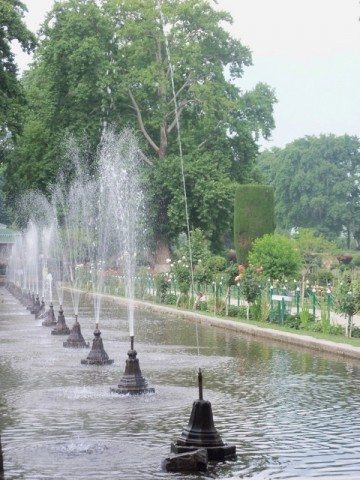 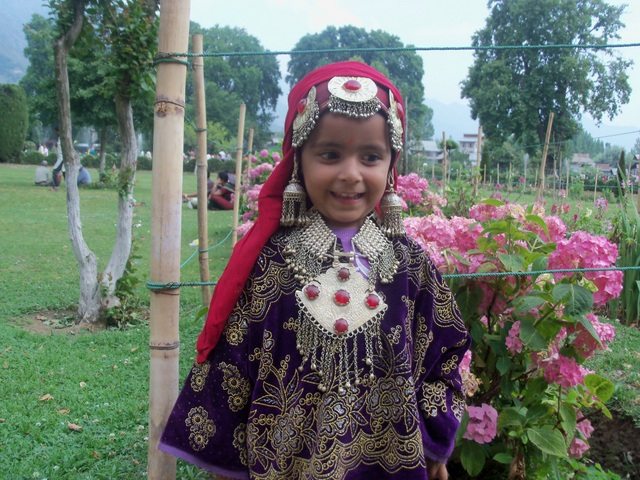 The garden is divided into three quarters mainly, the outer one which might have been open to the public at large at that time, only this part. The middle part of garden was the Emperor’s retreat a sort of Diwan-e-Khas and the last one is the enclosure meant for the queens as I discovered whatever a bit of history about this garden. It is a big garden. When we reached there twilight had spread its wings and during that time the garden was looking much more beautiful. Some of the motifs on the walls pointed towards a Hindu religion link, may be some of the artisans were Hindus who  might have used symbols like bell . After spending about 2 hours in this beautiful garden among the generous people of this beautiful city we headed towards our Guest House not forgetting to pack our dinner at Krishna Bhojanalaya.

Hello Ghumakkars We had spent two days in Srinagar, and were off to Gulmarg. If you still haven’t read the previous posts then click…