After a long drive, we finally checked-in at KMVN’s TRH, Sukhatal around 1:15 p.m. We were hungry and after freshening up, proceeded to the dining hall for lunch. The entire staff of the TRH, Sukhatal was very polite and willing to help whenever required. The menu doesn’t have much variety to choose, but the taste of their non-veg dishes was awesome. I always found a similarity in taste of chicken dishes in most of the hills of Uttarakhand. People may use some common ingredients which give a distinct taste to the chicken delicacies. We left for the Lake immediately after lunch.

We parked our car in the flats, which was formed due to a major landslide in 1880. The flats is a multi-purpose place, from parking to children’s playground to cultural activities. The parking fee is fixed i.e. Rs.100/- per entry, similar to the entry toll tax to the city. Since Nainital is a popular tourist place, the collection is no doubt huge from both these arrangements. If the authority also allocate some money to develop the sports ground in the flats, as well as to improve the parking area, it would be good. Playing in such a coarse pitch is extremely difficult for the children.

It was already 2:45 p.m. and as expected, the place was already jam packed with people like us. Our first view of the mango shaped lake, against a backdrop of the hills was charming. 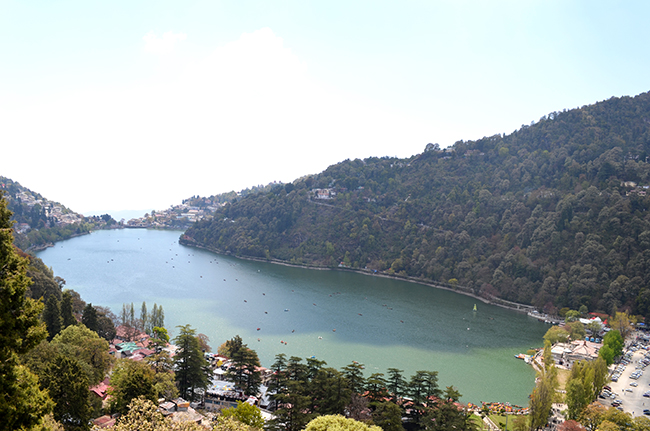 Ramesh, our boatman persuaded us from the flats area to take a ride around the lake in his canoe shaped boat and finally we gave in to his request, since we anyway had to hire a boat. We bought a ticket for the full circle by paying Rs.320/- from the counter. 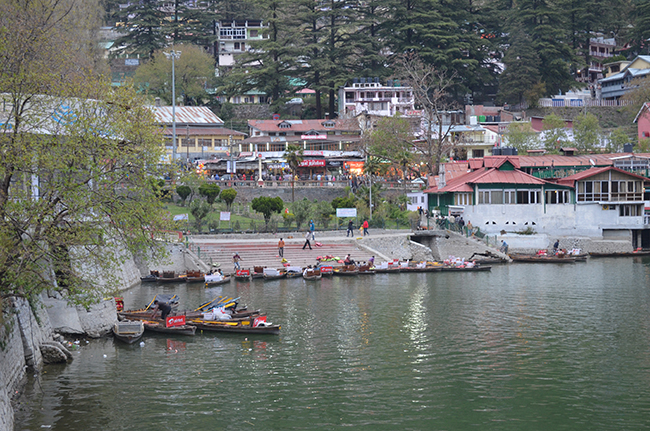 You need to hire boat from here

The lake is a natural freshwater one and is larger than what we had expected with a maximum depth of about 90 feet. Slowly the boat went around the lake. Ramesh started telling the story of Nainital willingly and we just loved the conversation with him. We came to know about lots of things about the place and the lake from him. 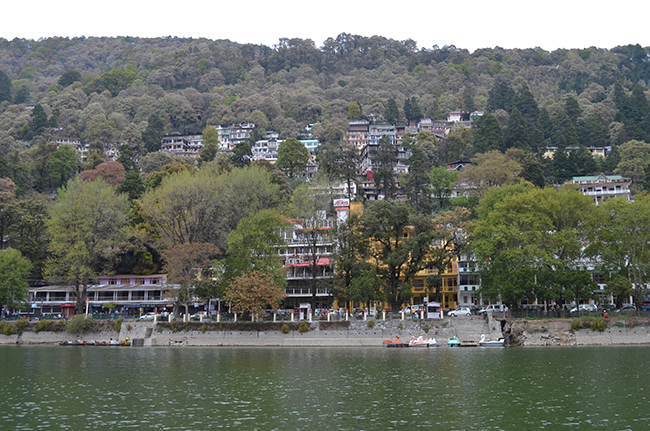 We enjoyed the boat ride with the mountains on one side of the lake and a whole range of hotels on the other. As we drifted away from the shore towards the middle of the lake, everything seemed smaller and smaller in size. Suddenly the sky became overcast with clouds and seemed like it would rain, when we reached Tallital side of the lake. Even in the month of March, we felt the cold as cool breeze was hitting our faces and sent an occasional chilly shiver down our spines. However, you can expect sudden change of the weather in the hills anytime. 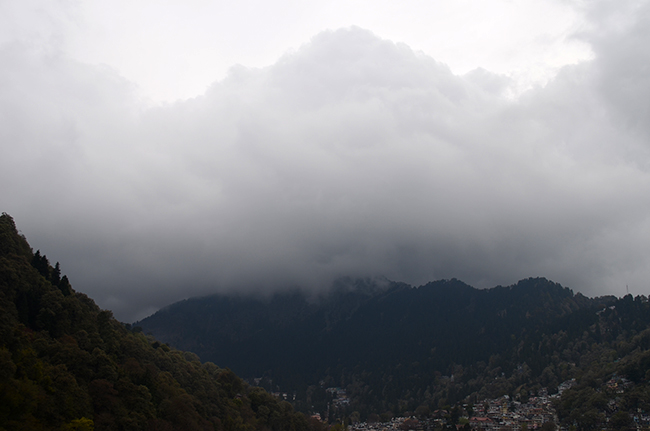 We also came to know from Ramesh that few years back the lake became polluted and there was a significant drop in water level. Now, the Government has installed a filter plant inside a lake which runs 24 hours and it’s good to see that people are concern about the lake’s cleanliness and beauty. 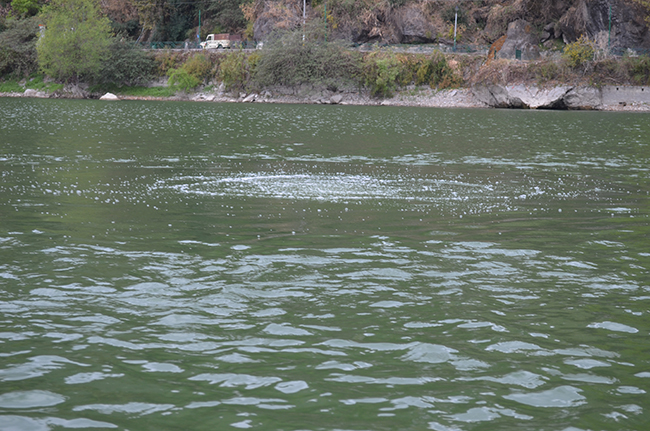 There are many water treatment plants installed inside the lake 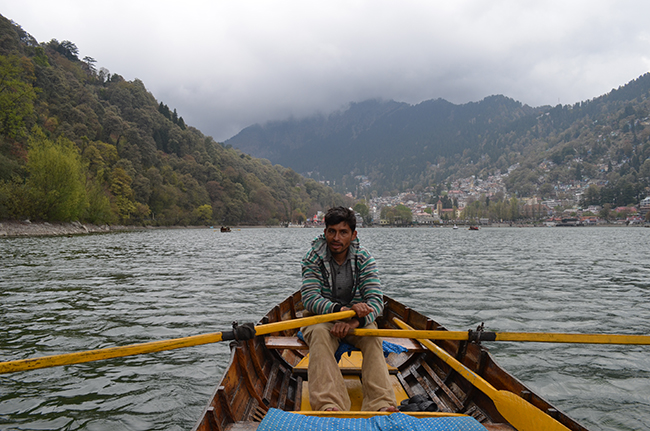 Finally, our hour’s ride had quickly come to an end and he dropped us near Naina Devi Temple. We exchanged our numbers and he assured us to arrange a good hotel or guesthouse at a reasonable price near the lake, whenever we will visit next. 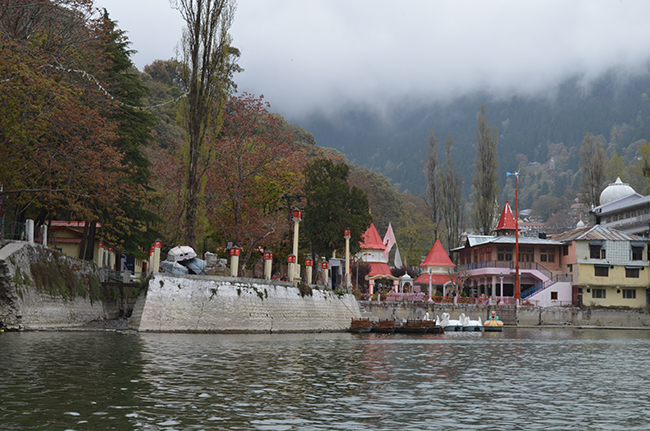 We went to Naina Devi Temple for a darshan.

According to the Hindu Mythology, the temple is one of the 64 Shakti Peeths; the eyes of Sati fell here, while being carried by Lord Shiva to Hima Parvat after she committed Sati by jumping in to Yagna fire. Her left eye having formed the pear shaped emerald blue lake of Naini Tal.

You can see a perfect view of Naini Lake from Naina Devi temple. 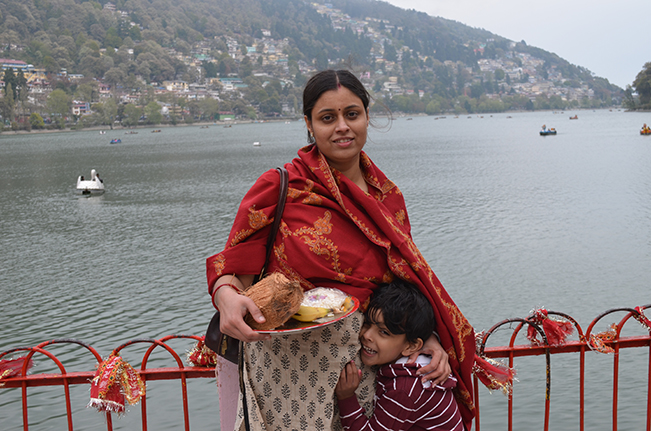 One for our family album

After our visit to the Temple, we were roaming around the Tibetan Market aimlessly. However, even our aimless walk was very much enjoyable. It is a typical market in the hills.

Children were playing carom in the street. Some locals were also selling fresh strawberries and mulberries in a special cone shaped leaf. 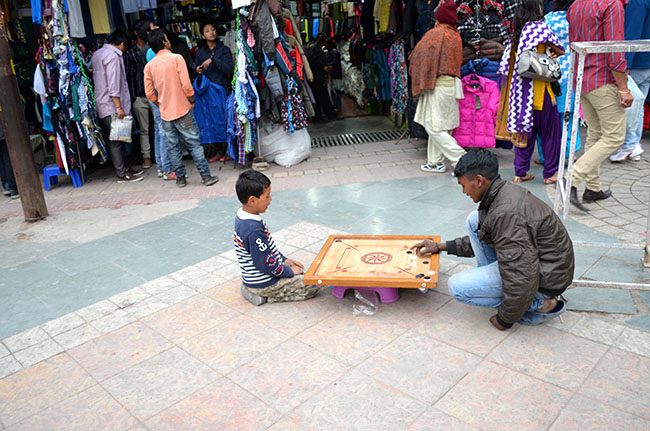 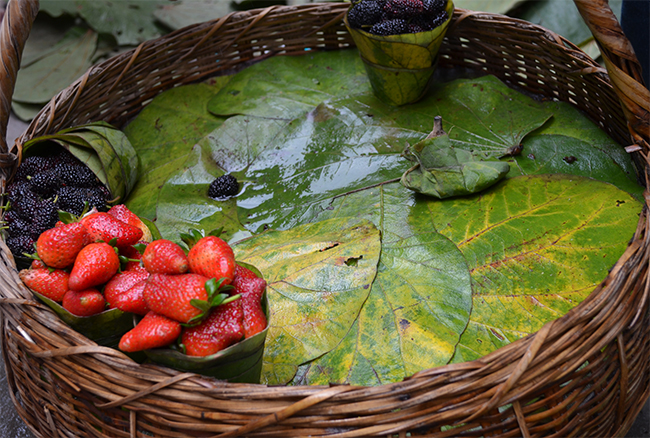 Only a few left for us

There are many small shops selling toys, sweaters, jackets, candles. We had to bought some sweaters and jackets, as we were feeling cold and weren’t carrying any woolen clothes with us. We never thought that we would require sweaters or jackets even in end of March, when Delhi is boiling.

For few timeless hours, we sat on one bench built along the side of the lake and looked on to the lake and framed many pictures in our camera, as well as framed the lake in our memory, permanently. Evening had almost set in and it was the twilight stage. The sight of the last of the boats returning to the shore was a wonderful experience. The lake which was the main attraction of the city was slowly became deserted and the small eateries and food joints across the road were coming up to life.

It’s time to come back to the shore

We were also feeling hungry and strolled down the road to the Tibetian market; stopped for a couple of times in between to have a taste of the road side eateries for momos, thukpa, Pav-Bhaji, or all time ladies favourite “Golgappa”, combined with numerous session of tea.  We were also indulged ourselves in games like gun shots after a long long time. 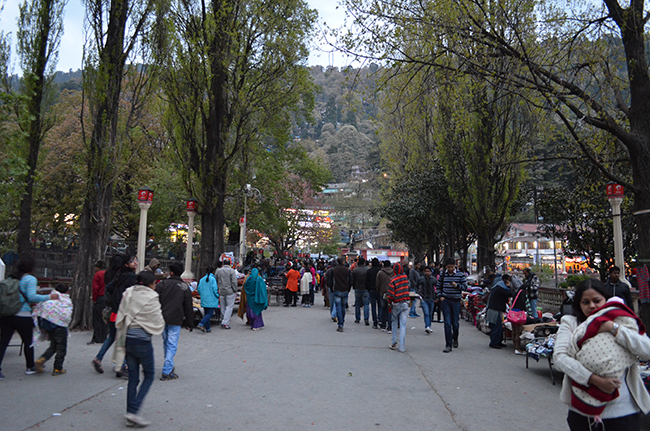 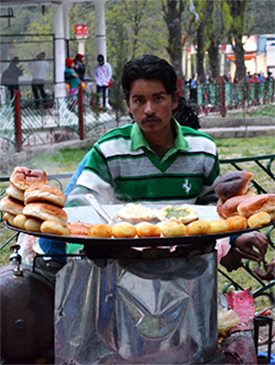 From there, we went to Mall Road, which encircles the Naini Lake at the heart of the town and is dotted by numerous shops, many of them selling decorative candles for souvenirs. There is a Municipal Library like in Mussoorie. However, it was closed by then. 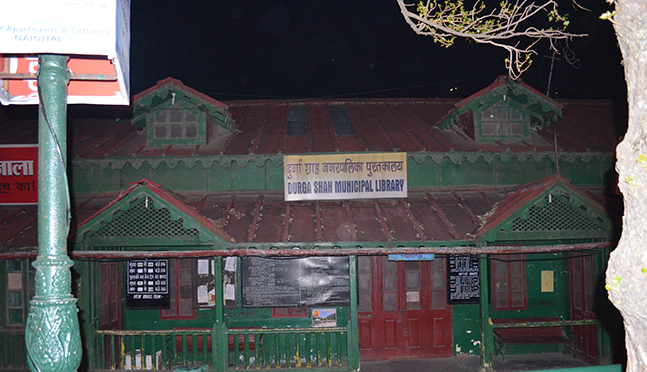 (Every city or even small town has a library. Hope someone in Gurgaon MCD is listening and again, we don’t need a Five Star or the best in the world kind of Library in the making. Just a simple Library, where we can go and read with nominal membership fees. If there is already one, please share the information with me.)

By 8 p.m., the Mall road was busy with tourists and people at large. We also had our share of corn & ice-cream while walking. Nainital is famous for designer candles. We were also amazed by the variety of show pieces crafted out of wax. There were candles in the shape of different fruits and animals, or even dancing statues. We purchased quite a number of wax items for everyone. 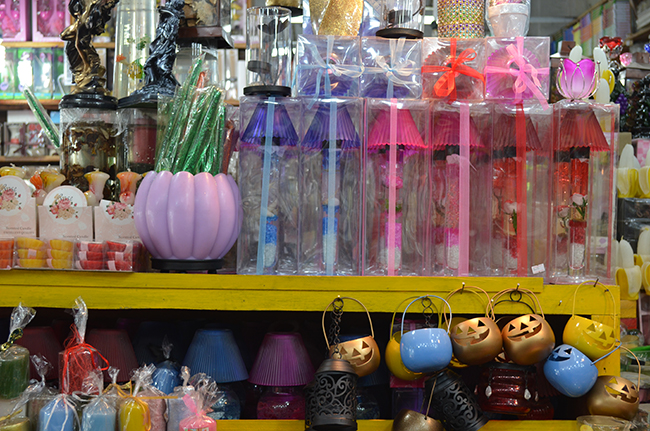 There is many restaurants from Chinese to South Indian to North Indian. We also had our dinner in one such restaurants in the Mall. By 10 p.m., when we finished our dinner, the road was almost empty. 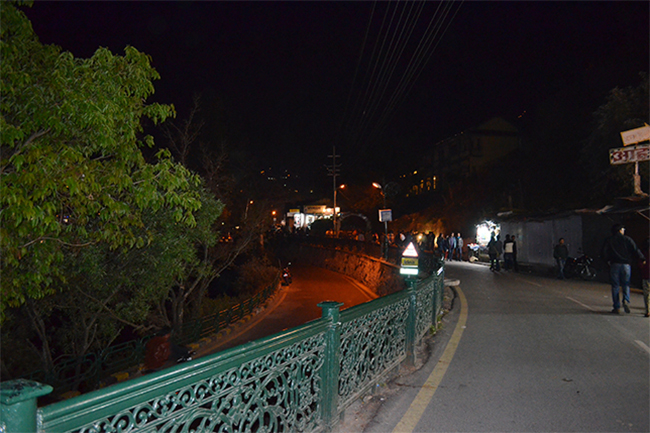 It was a long day for all of us. We walked at a leisurely pace, water on one side and the mountain on the other, under the cool shade of the trees. However, the elegance of the lake is even more magnified during the night. We stood there for couple of minutes looking at the lake and finally returned to our hotel by 10:30 p.m.

We had not decided about our next day’s plan. So, before we call it a day, we thought to finalize our next day’s plan. We had few choices, either to explore nearby popular tourist points like Zoo, Dorothy’s point, Cave Garden, Snow View point etc. etc. or plan for a tour to see few other beautiful lakes e.g. Sattal, Bhimtal, Naukuchiatal, Khurpatal etc.

However, being from a place where we have seen many rivers and real big ponds, jheels (agree, without such natural beauty, hills) we were interested in somethings else. We found few pamphlets in the table, mentioning nearest spots as well as KMVN’s other properties in Uttarakhand.  It didn’t took much time for me to decide our next day’s plan, as soon as I picked-up one. When I told her about our next days’ plan, the first question was “Why would we be interested to go there?”.  She was not aware of the place that time. The brief description in the pamphlet came to her rescue.

I had already read about the place here in Ghumakkar.com (how SS’s trip was spoilt by some uncivilized youth on the New Year’s eve few years ago), but had no idea about the way or how the road lies ahead of us, except that it is ~90 Km from Nainital as mentioned in the pamphlet.

We came to Nainital after seven long years of waiting to relax only for two days. Now I suddenly felt the urge to explore the thrills and mysteries hidden in Himalayas, as well as to unfurl the delights of nature like none has done it before.

It was a very good day since morning. I fall in deep sleep by mid-night while remembering about our journey since morning, as well as preparing myself for tomorrow’s driving to a completely unknown, difficult terrain 0f Himalayas, while enjoying the beauty of the Kumaon Hills towards ‘Jageshwar‘, our next destination. The Himalayas is beckoning me…(to be continued)