Day 1: A simple matter of getting on the flight, being served by the exquisite Thai air hostess, a short nap and finally hours after the flight has taken off from Dubai, I land in another part of the world, three hours ahead of my normal time, in a place totally alien to me. Thailand. The Land of Smiles 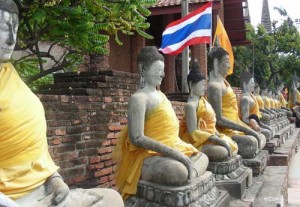 I wasn’t prepared for anything which is what conditioned me for everything to come. I can’t explain it. But when I landed at Bangkok, (Suwarnabhumi pronounced Su-wana-poon) a singularly inspiring piece of engineering, I was overcome with various feelings_ euphoria, above all. I needed my visa (on arrival for Indian passport holders), a shower and change. I was backpacking, had no time to waste, had to pack in as much as I could while I was here and I wasn’t going to check into a hotel to distress.
Thankfully, airports are rather well equipped to deal with needs such as mine! A quick change, quicker steps to the visa counter, a thousand smiles, a thousand Baht and lo, my visa was stamped right there (talk about Thai efficiency). I was officially in Thailand now. The airport itself looked like a mini-Buddhist town.

Food: I needed food. I was always hungry, I realized. I had no clue when I would eat next, so I explored the food court at the airport which threw up many varieties. I settled on Magic Food Court, closest to the exit, not really relishing the taste of rice noodles served with sweet and spicy sauce, tofu, pork, sprouts and herbs I had never seen, heard or tasted before. I never got the name of the dish (but definitely a picture). But I had made up my mind to enjoy the last grin of Thai rice in every meal. 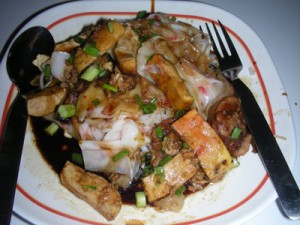 I boarded the Airport Express bus outside the Magic Court. (This is where you get a bus to the City. Airport Express buses ply at regular intervals and are named AE 1, AE 2, and AE 3) In my subconscious mind, I wanted to be on the first train to Kanchanaburi that left Thonburi station at 1.50 pm. I had enough time. (Ticket 150 THB)

The bus seemed to have been commissioned solely for the purpose of shuttling backpackers such as I for I saw no tourists no family-type visitors on it. Few backpackers sat scattered throughout the bus, bent over a map or Lonely Planet, looking as content as possible for the 75 minutes ride into the city. I enjoyed the feeling of not knowing where I was going, more than the Thai songs that played loudly, more than the Thainglish the driver spoke, eager to convey to me the surprises of his country. One curious tattooed backpacker assaulted me with a barrage of questions, wanting to know why, as an Indian woman, I was on my own. Indians were many, holidaying or making money, but he had, he told me honestly, not come across a single Indian woman BP in Thailand….and he had been two months on the roads already. He came once in two years.

Keep Pattaya off your itinerary, he told me seriously. ‘If you like the treks, you are in the ‘league of BPs that would not like seedy beaches’.
I took his word for it.

He left before I could say goodbye at Sanam Luang.

The bus saw me off at Sanam Luang, in close proximity to the Tourism Authority of Thailand (TAT) office, also close to the ferry-boarding at Tha Phra Chand that would take me across to Thonburi.

Sanam Luang is a quiet, cool and shady area and shows the city in good light.
An eager tuk-tuk wallah fell on me. I smiled. His smile widened. Thonburi, I told him, gesturing at the tuk-tuk and asking him how much it would cost.

He had ideas…and he spoke a bit of English. He suggested going to the TAT office nearby, get myself an itinerary or probably even a ticket, and the correct information. He turned around and hailed another tuk-tuk and spoke rapidly in Thai. In the end it was agreed that I would pay the tuk-tuk 10THB for a ride to the TAT office and if I didn’t like their plans, I would be shown three popular sights nearby for an additional 10THB.

I suppose it was a good deal. Tuk-tuks were the best way to see the city and despite the noise they made, riding in them was exciting. The young driver drove rapidly through the infamous traffic, stopping briefly at 7/11 (chain of convenience stores all over Thailand) for coffee (Coffee at 7/11 is 10 THB), before dashing off to the office.

I drew a blank. I didn’t want their itinerary, didn’t want to be stuck with their group of family tourists. Refusing to visit the Sleeping Buddha, I asked to be driven to Tha Phra Chand. Under the given circumstance, it seemed to be the most sensible thing to do.
If you have time to kill at Tha Phra Chand visit the Grand Palace, University, Supreme Court and the office of the attorney general, otherwise walk around the roadside market and sip a tender coconut.

I had time to kill, but more than anything I needed the washroom! While looking for one, I met Mrs Supawadee Maspong. I sought her out of the hundreds of people milling about, because I thought I could make her understand what I wanted. 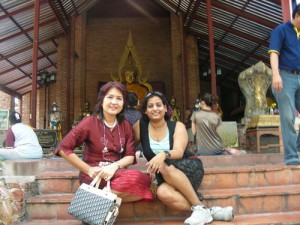 A friendly lady indeed! She looked elegant in the Thai style deep maroon skirt and blouse with a single strand of pearl. She knew where to find a loo. We walked backwards, towards the pier and we got talking. 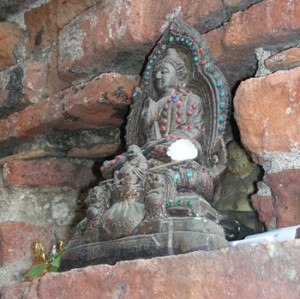 She was heading to Ayuthya, the former capital of Thailand, a temple town, and asked if I would like to come along. I hated to miss the train to Kanchanaburi and Ayuthya did not feature on my plans… but heck, why not? I didn’t have a destination, and here was a free ride (and back too maybe). I could always take the early morning train!

So to Ayuthaya I went. Mrs Supawadee Maspong (I called her Pari) turned out to be the Chief Provincial Public Prosecutor of Ayuthya Province! Talk about luck!

Meandering through the traffic, we reached Ayuthya through the expressway after paying tolls at four different booths (total about 90THB).
(to be continued…)

In the land of smiles: Thailand was last modified: November 16th, 2017 by Anjaly Thomas

As described by the English poet, Sir Edwin Arnold – “Not a piece of architecture, as other buildings are, but the proud passions of…