During early 2017 , one fine morning I planned to visit Adisaptagram which used to be an ancient port town of Bengal but lost its glory significantly. I boarded the Howrah-Burdwan local train and within an hour reached the Adi Saptagram railway station.

Saptagram was an ancient flourishing port town of Bengal which had worldwide fame. Sadly very little remnants of that old glory still exists today. Saptagram township was set up under the rulers of the Sen dynasty. Zafar Khan captured Saptagram when Rukunuddin Kaikaus was the Sultan of Bengal (1291-1302). Alauddin Khilji accepted Rukunuddin being an independent ruler of Bengal.

Famous traveller Ibn Battutah has mentioned about the prosperity of Saptagram in his travel memoirs. Saptagram used to be an important business port during that time in the world map. During 16th century , the Saraswati river which flows past the port town started to dry and thus the importance of Saptagram gradually started to decline. Saptagram literally means “ Seven Villages”. The seven villages which comprised Saptagram are Basudebpur , Bansberia , Khamarpara ( Nityanandapur ) , Krishnapur , Debanandapur ( Sambachora ) and Tirisbigha ( Baladghati ). All these seven villages even exists today but the erstwhile prosperity has faded to a large extent.

In several historical documents , Saptagram is also regarded as Satgaon. There is also a mythological story behind the origin of Saptagram. It is said that King Priyabanta was the king of Kannauj and his seven sons arrived on the banks of river Saraswati looking for some peaceful abode and each of them settled in seven nearby villages which comprised of Saptagram.

Saptagram finds mention in the travel memoirs of Ibn Batutah ,Caeser Frederick , a venetian traveller, Tome Pires , a Portuguese traveller , Ralph Fitch , an English traveller and many more. The Portuguese also settled in Saptagram during the 16th century when Ghiyasuddin Mahmud Shah was ruling Bengal. The Portuguese called Saptagram as Porto Pequeno ( little haven ) and they converted it into a flourishing port.

If the Saraswati river wouldn’t have resided , Saptagram would have flourished as the capital of South Bengal and today Kolkata wouldn’t have born as an alternative. It was the decline of Saptagram which lead to the foundation of Kolkata . According to H.E.A. Cotton , “Here then may be traced nucleus of the future city of Calcutta, and as time went on the silting up of the river opposite Satgaon still further favoured her fortunes”.

It is also a rich archaeological site being an ancient port town and several statues and artefacts are unearthed even today which finds a place in different museums across the globe. Naliniranjan Pandit had collected several terracotta artefacts from Saptagram and had donated them to the Bangiya Sahitya Parishad museum in Kolkata.Prabhas Chandra Pal also discovered several archaeological treasures while a well was being dug in this region. Rakhaldas Bandopadyay of the Harappa and Mohenjodaro fame also discovered a broken stone idol of Goddess Saraswati from Saptagram. The said statue is almost 1 feet in height with Goddess Saraswati holding a Veena in her hand. The idol finds a place in the museum of Bangiya Sahitya Parishad in Kolkata.

My first stop was the most significant remnant or structure which silently speaks of the ancient glory of the town. It was the Syed Jamaluddin Mosque. I hired a battery operated auto rickshaw and instructed the route to the driver along the national highway. Within 10 minutes , I reached my spot. 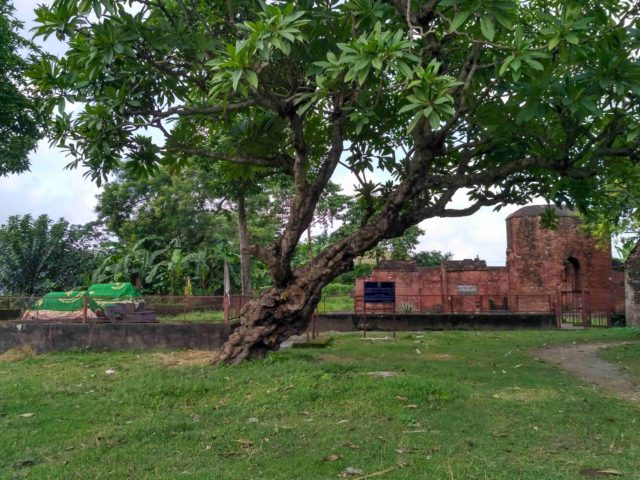 View of Syed Jamaluddin Mosque from behind the tree 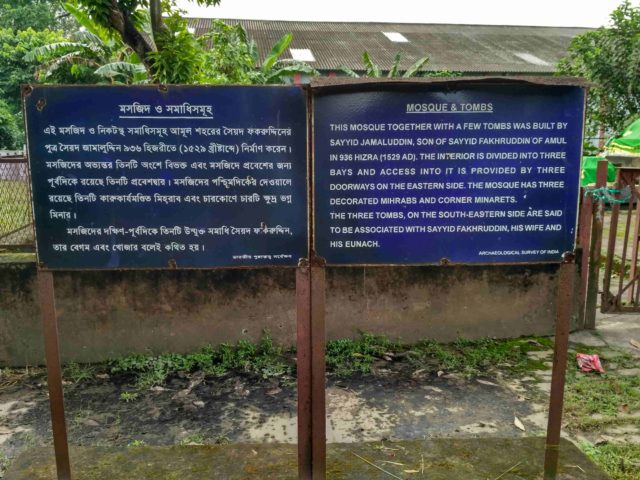 Archaeological Survey of India Board 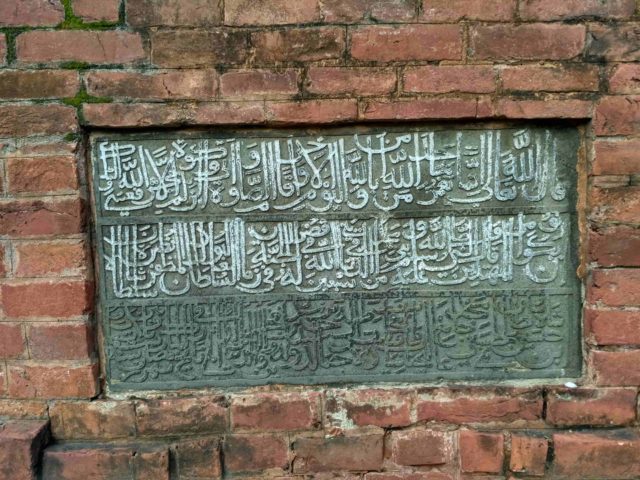 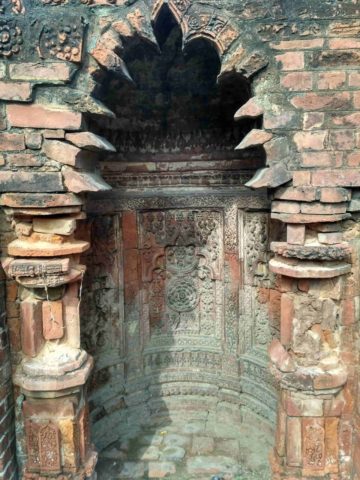 Rich terracotta decorations on the walls of the mosque 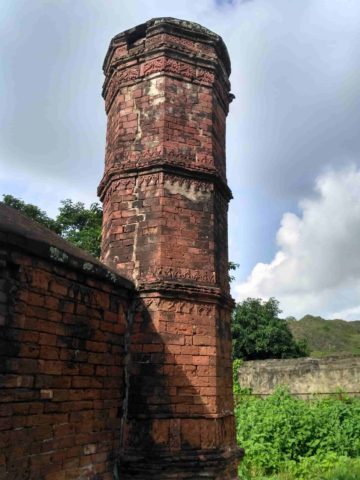 One of the corner minarets of the mosque 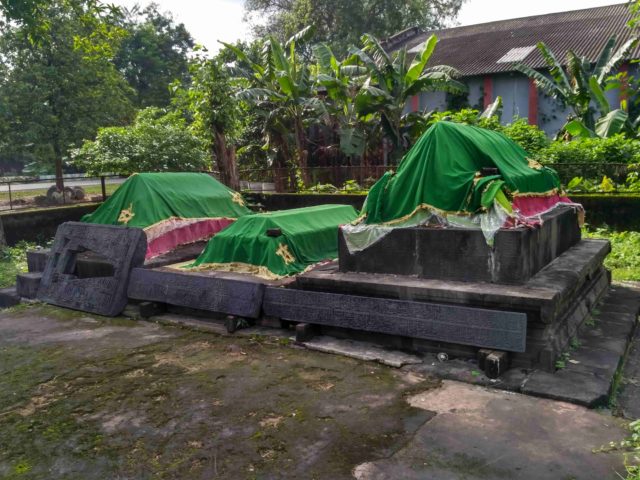 Tombs of Syed Fakuruddin, his wife and his eunuch

There are three tombs on the south eastern side which are said to belong to Syed Fakuruddin , his wife and his eunuch. The interior is divided into three bays and access to it is provided by three doorways on the eastern side. There are also several stone plaques scattered around the mosque which looks like jigsaw puzzles. The writings on those stone slabs mentions about two more mosques – one being constructed during 1463 AD by Tarbiyat Khan during the rule of Mahmud Shah and the other during 1494 AD under the reign of Fateh Saheb.

There is a huge tree on the entrance of the Mosque and the Saraswati river once used to flow on the backside of the monument which has gradually resided with time. Also in history books it is mentioned that prior to this Bahram Khan who was appointed by Ghiyasuddin Tughluq , the then ruler of Delhi also built a mosque using the bricks of the plundered Hindu and Buddhist temples during 1324-1328 AD. 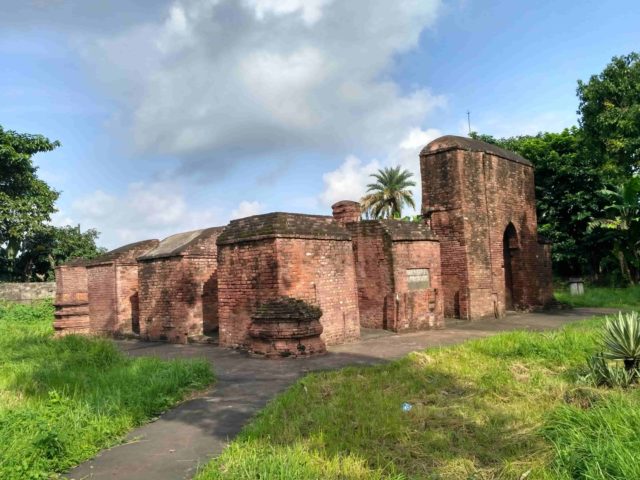 Backside view of the mosque 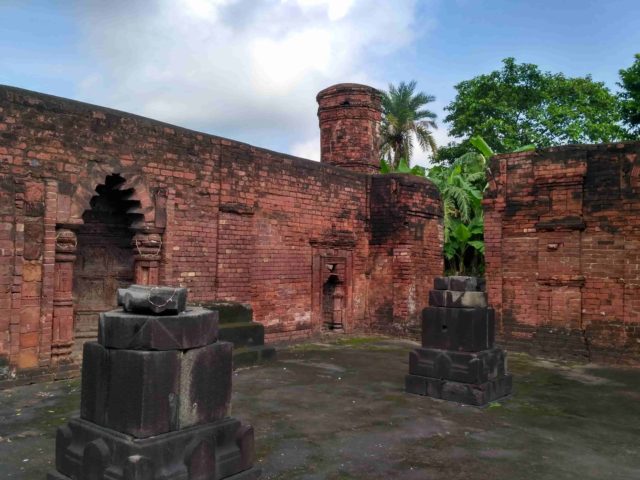 My next stop was Uddharan Dutta’s Sripat or the Samadhi temple of Uddharan Dutta. It is a highly popular place and is located within the heart of the township. 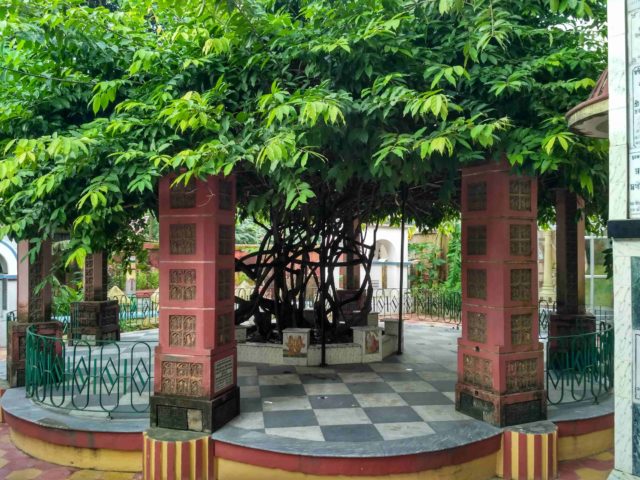 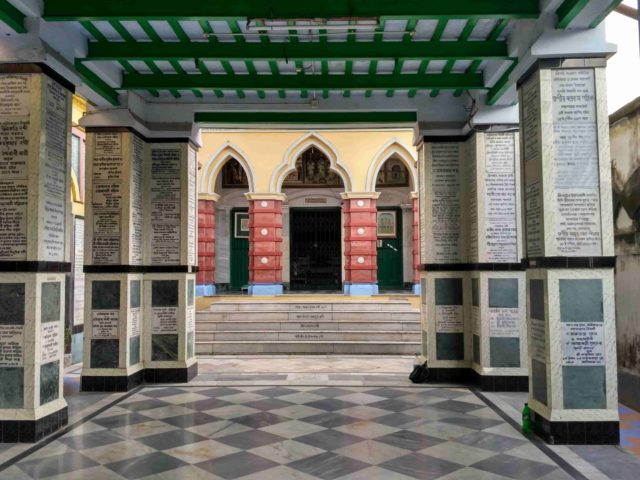 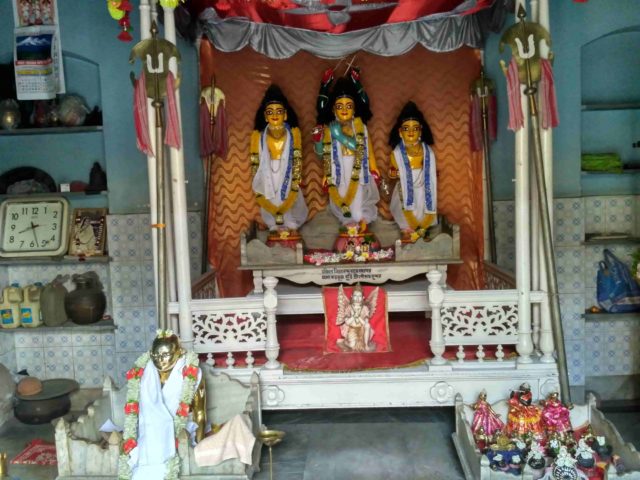 The other significant place of interest out here is the Samadhi temple of Uddharan Dutta , a direct disciple of lord Chaitanya. Uddharan Dutta is a popular figure among the Baishnabite clan who was born in 1481 AD and died here in 1541 AD. The original Sripat or Samadhi temple was in ruins until the Subarnabanik caste of traders renovated in the early part of 19th century.

The temple complex is peaceful and is quite and serene. Huge gatherings of disciples and followers take place during relevant festivals. Uddharan Dutta was very favourite of Nityananda. At Sripat of Uddharan Datta at Saptagram there are statues of Srigouranga, Nityananda and Uddharan Datta. Here is held the daily worship of the idols. A Mahotsav is also held annually on the death anniversary of Uddharan and many devotees and Vaishnavas assemble on this occasion.

After visiting Uddharan Dutta’s Sripat, now it was the turn of Raghunath Das’s Sripat. It was located on the outskirts of the town in the village of Krishnapur. We went past muddy village roads passing several waterbodies and mango groves.

At the adjacent village of Krishnapur, there is the Sripat of the renowned Vaishnava saint Raghunath Dasa. Here the idols of Madanmohan, Chaitanya and Nityananda have been being worshipped till today. Raghunath was the nephew of Hiranya Majumdar, the landlord of Saptagram. He was devoted to Chaitanya from his boyhood. He forsook all his wealth and luxury and fully dedicated himself to the feet of Sri Chaitanya. By dint of stern asceticism and total renouncement of the worldly life, he was elevated to the rank of one of the Sada (six) Gosvamins of Vrindavana, though he was a non-Brahmin. 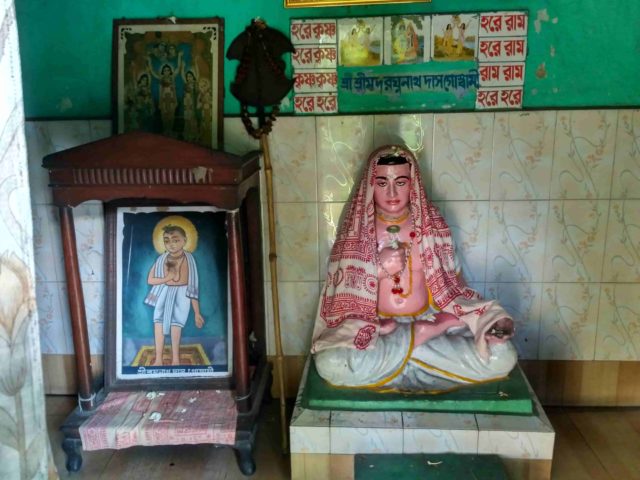 Raghunath met Nityananda at Panihati, a famous place of Vaishnavas in 24 Pargana and got his blessing. There he gave a Mahotsav of Chida and Q.ill (flattened rice and curd). This Mahotsav is still held every year and the West Bengal tourism department is trying to popularise it. Afterwards, on his way to Nilachal, Raghunath Dasa came across Sri Chaitanya Dev and also obtained his blessings. 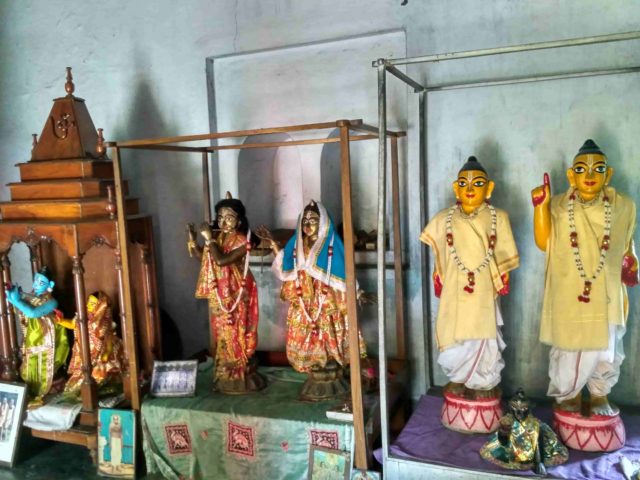 Idols of Madanmohan , Chaitanya and Nityananda

Neo-Vaishnavism spread at Saptagram by Raghunath’s endeavour and Krishnapur won the status of a holy shrine of the Vaishnavas. Every year a fair called ‘Uttarayana Mela’ is held on the 1st Magha of Bengali Calendar during winter season. But, lately the importance of the shrine and fair has much dwindled.

It was an enriching day of history digging and experiencing the ancient heritage of Bengal and cradle of Vaishnab religion. Finally I boarded the return train to Kolkata and reached home by evening.