It was quiet. We had moved away from the pier at Rinca Island where two other boats had dropped anchor for the night. Mathias was not keen on having the crew of the other boats steal into ours at night. His concern for the safety of his group and belongings was admirable. One could easily mistake his decision if one went by the message on his T-shirt. It read “NUMB AND STONED” but clearly that was only a decoration. His mind was sharp.

According to him, incidents such as these were not unheard of. Secondly because the Latvians did not want to be too close to the other boats. 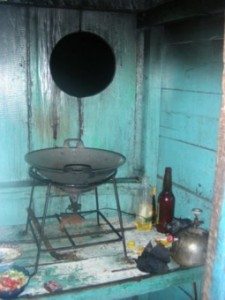 The tiny kitchen on the boat...and the kerosene stove. See the 'hole' at the top? Thats natural ventilation!!

The pier was surrounded by thick mangroves, the mosquito army was getting ready for their nocturnal march. Out in the open sea, we would be safe from mosquitos… that however was ruled out for Mathias in his eternal wisdom refused. I knew why. I explained to Amanda, which she could translate to her folks (Peteris understood though) that we couldnt anchor out in the open sea because our boat was too small, the anchor wouldnt hold, small, yet powerful whirlpools were common, and if the sea misbehaved at night, we would drift away from course and not be able to back track for and our boat had no lights and was not fitted out with gadgets etc and the only communication to the shore, if needed would be through Mathias’s mobile phone, which of course was merely employed to bolster our confidence, but which never really worked that far off the shore.

So we motored to the other side of the pier, not completely out in the open, but not to close to the land either and dropped anchor. The mosquitoes were smarter. They knew. I dont suppose any of us had though of mosquitoe repellants, but we surely did regret not having thought of it.

The crew busined themselves with the dinner. (see pic of the kitchen).
We waited. No conversation took place, every lost in the darkness beyond, tired from the walk, absorbing the silence.

The only sound that could be heard was the hissing of the kerosene stove and the small OBM that produced enough light fro one bulb, barely managing to keep away darkness from the deck.

We had carried bottled water for our journey and food, a big blue bucket of fresh water that was tied to the pole on the deck..for purposes of washing our faces only. For all other purposes, well, there was the sea. The crew drew up water in buckets, straight from the sea for use in the toilet. Not necessary to add that the toilet (kamar kecil in the local language) opened straight into the sea. No way you could shower, not until you reached the shore and God knows when.

If the weather held, the next evening, after the trip to the Komodo Island, Pink Beach and few smaller islands on the way. 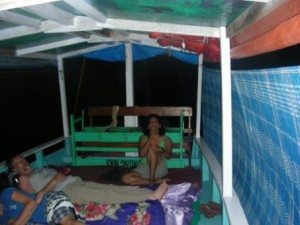 Night on the boat...no complaints...it was the best night ever. The boat rolled, just enough to lull us into a blessed sleep.

The night was cool, thankfully. My skin, though not as bad as Amanda’s or her mother, had turned several shades darker than it was and was burning alright! Sea water did not help, naturally! Without any soothening cream to cool it down, “carrying on in silence” was the only option open to me. My nose, I had noticed earlier had turned red, signs that soon it would start peeling! Fresh water was low and absolutely essential for emergencies.

Dinner was a low key affair, though we all managed to polish off the last grain. I am not even getting into the taste side of it, suffice to say it was cooked, you could guarentee that, what with the kerosene smell still lingering.

We turned in. The “dining table’ was moved to one side and beds were laid, old and smelly sheets and quilts we spread over the deck and some equally old, flattened out pillows made up our “grand bed” for the night. I got the side, with Peteris next to me!

The motor was turned off, the stove stopped hissing and suddenly we were alone with the darkness!

Absolute silence. It could have been scary were you caught in it in any other place, but here here it was welcome, and expected. Fear would set in if we did hear sounds other than that of crickets, night birds and waves washing up against the boats.

It made me think a lot…for a few minutes before I fell asleep…The hard floor felt good against my back. The boat rocked ever so gently, the night grew still…

I woke up at 4am. It was dark. I groped my way past the sleeping Latvian family, avoided bumping into Mathias who lay near the engine room, huddled under a faded sheet, to the top of the boat, where the crew slept. Blissfully. The sky was their roof. I hoisted myself up and lay down beside the one guy whp had given me his “fisherman’s chain”. The chain was really a thick and not-so-elastic band, was black and usually worn by the crew for good luck. It looked like a primitive anklets, minus the little jingling bells.

I waited for the morning.

Night on the boat was last modified: November 8th, 2019 by Anjaly Thomas