It was the day before Vijay Dashmi (Dusherra) I along with my companion , butterflies in our stomach , an eject button that one calls ,far away from the hustle bustle of this metro polis,in order to embark on an escapade , boarded the Jabalpur bound train from Delhi in the evening of 5th October 2011 heading towards the thick meadows and lush green washed Satpura Ranges to feel the heavens abode in a place popularly known as the “Queen of The Satpura Mountains” — Pachmarhi.
We boarded the evening Delhi – Jabalpur Superfast on 5th October 2011 to get down at Pipariya in Hoshangabad district. Pipariya is the nearest railway station to Pachmarhi which is 54 km away. Pachmarhi is nearly 200 km away from the state capital,Bhopal. 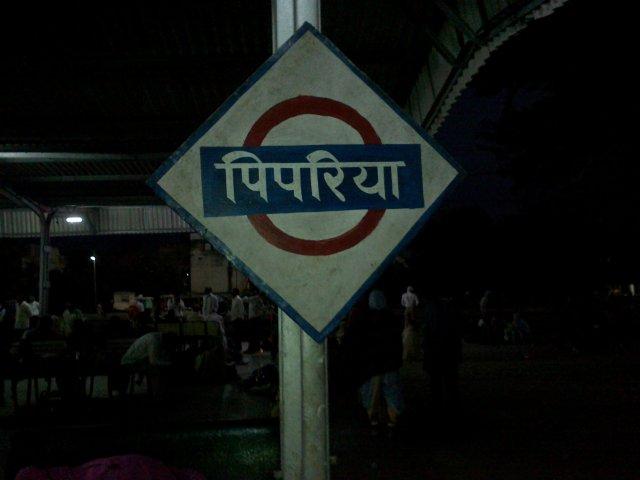 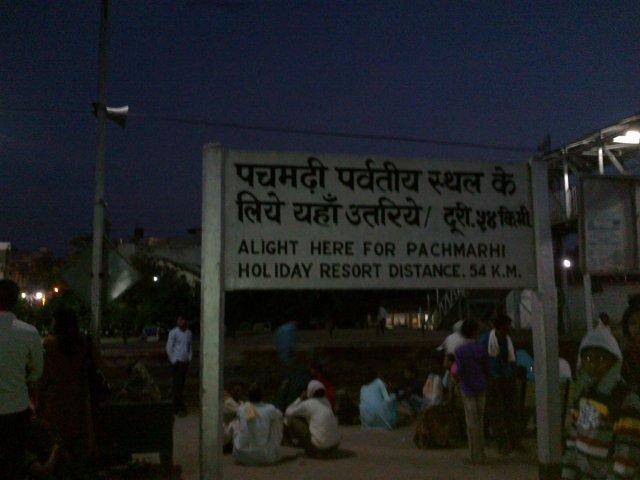 The next morning at 6.00 am we reached Pipariya … yes the train was late by 45 minutes . It started staggering at a snail pace at Jhansi till Itarsi but gained momentum steadily towards the destination.The station had only two platforms occupied by almost all locals,many squatted relaxing & staring at the people ,hurriedly we moved out of the station to find a bunch of taxiwallas encircling us ….. I said we’ll return after visiting the town in a bid to get rid of them.

There was a mad chaos towards the streets with cows and bulls roaming in their most fashionable gait.One can push you very easily with an unapologetic face,throwing a sigh at you saying “bhaiya dekh ke chalo” with a dissenting and relentless tone on all your protests. What a place? huh and a welcome note of street hawkers obstructing every way of one’s exit ,thinking pointless to move forward we resorted back towards the railway station.

These are my impromptu remarks of the town ,sorry if i offend anybody but the fact lies in perception, which is variable to the extent of experience one gets.

There was only two good thing about Piparia .. one it marks the commencement of a brief journey into the rugged mountain ranges of Satpura’s and other was “Poha Jalebi”, a breakfast cherished by almost everybody in the Central India.So was i ,liked it considering the hunger pangs and the voluptuous taste .

One can avail local transport i.e.., jeeps on sharing basis who charge around Rs.50/- per passenger. But i suggest that this option is not a viable one , due to safety issues arising out of overloading and rash driving. There is also taxi service available one can find outside the railway station. We hired a taxi for Rs.500 after a bargain …. yes the tariff is not fixed — one can bargain and get the best deal. The motive behind taking a taxi,for me was to capture the scenic beauty on the pathways towards the destination,which otherwise was not possible in a public conveyance stuffed with local junta . 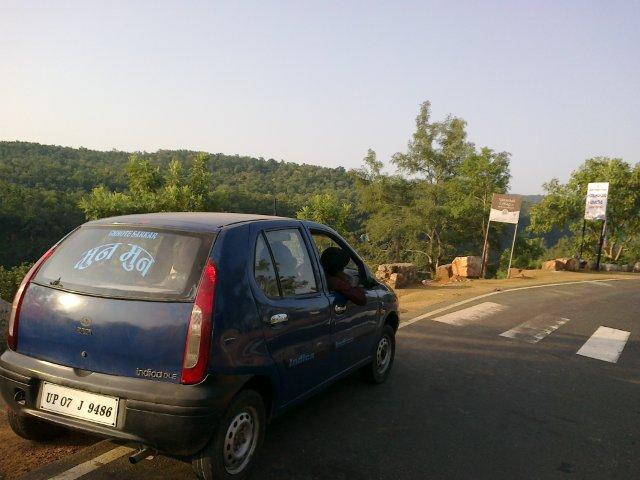 Gyarsi ..our driver sitting inside

But what a luck …. the taxi was in such a deplorable state of affairs that even a small jolt could pull the dashboard towards the seat!!!!!! ….. Don’t take it in literal sense it’s just a metaphor !!! …….. The Indica car had touch screen windows …… No !!!! please don’t take it as some value added feature of the car. The windows needed a slight push of the palm in order to put it down and even at the time of pulling it upwards.Very funnily it was written “Chun Mun” at the rear end of the car. I was exasperated initially thinking that this ride is not worth the pay but i calmed myself thinking of Pachmarhi.

We started our journey overlooking the plains which ended near a small village known as “Matkuli”, which marks the commencement of the Satpura National Park and a divergent road towards Chinddwara, towards Nagpur in Maharashtra. Nagpur is roughly 250 km away from Pachmarhi with heavy frequency of buses and public transport .

One can get a distant glimpse of the Satpura Ranges enveloped in smog,as it appears from a distance. It is only after a few miles from there the ranges are apparently seen covered with lush green blanket. I was exhilarated by the thought of reaching on top and smelling the fresh air of the hills. Our taxi driver … his name ummm…if i can recollect was Gyarsi Das , on a mute button until we reached a point on the midway , a village known as Bari Aam near Matkuli …. The main feature of this place was a small natural pond which was surrounded by small hillocks on one side and the road on the other.

The water appeared to be clear and i clicked this sun-bathed pictures of the pond , nothing was known from him about the history and eminence of the pond but this can be comprehended that its formation is only through rainwater and not as a result of the ponds formed by the Denwa river,description of which has been elaborated down in my narrative.

From here onwards Gyarsi ,our driver started to speak about the Satpura National Park and wildlife sanctuary giving rough estimates of the flora and fauna subsiding within the periphery of the reserve.

SATPURA Mountain ranges which separate the North India with the Southern part, extend from Eastern Gujarat(Rajpipla) running east through Madhya Pradesh till Chattisgarh (Rajmahal Hills) covering roughly around 900 km drained by Narmada in north and Tapti river in the southern belt. 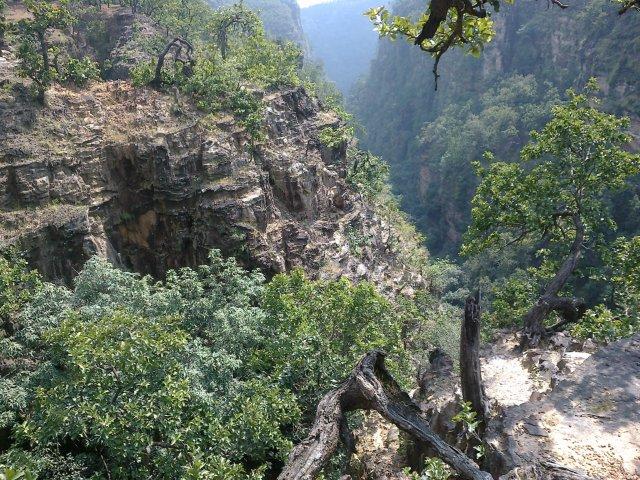 A view of the Satpura range

It is evident that Satpura ranges are situated between the Tapti and Narmada River basins with Vindhya Ranges running parallel without any dissection.

The seven mountain ranges or folds of Satpura’s are Maikal where Narmada finds it origin near Amarkantak ., then comes Mahadeo Hills near Pachmarhi., Kalibhit ,Asirgarh, Bijagarh, Barwani, Arwani which extends to Rajpipla Hills in Eastern Gujarat.

Going by mythology it is propounded that the Satpura’s are the seven sons of Vindhya Ranges ,their birth is not a matter of consequence ,but was to avert an overflowing angry Narmada river which in its wrath was drowning the whole earth. 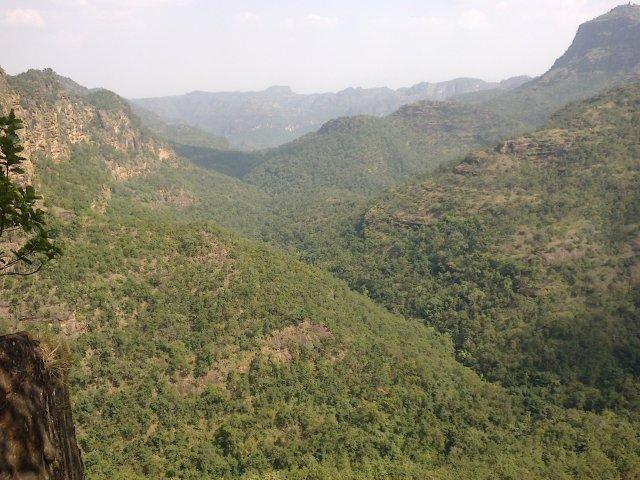 This is not a populist version but only takes its refuge in myths and ancient folklore devoid of historical , geological and scientific promulgation.

Moving forward towards a stream flowing in a valley is a point known as “Denwa Darshan”. One can overlook the Denwa river flowing down in the valley . Denwa is a tributary to the river Tawa. Tawa is the biggest tributary to the river Narmada.The Tawa river finds its origin near the rocky plateaus in Betul district(South Madhya Pradesh),moves northwards from there and falls into Narmada before Hoshangabad. Denwa river acts as watershed for almost all gorges and valleys of Pachmarhi surrounded by Mahadeo Hills,which is one among the seven folds of the Satpura Ranges. It is somewhere near Matkuli , we stopped to view the valley engulfed with thick vegetation on both sides and a small stream flowing ,cutting through the rocks and pebbles of this beautiful chasm.

Finally we reach the hill resort of Pachmarhi after along hour drive . We got down at the Central market of the town,strolled down the streets for a while, astounded with little information , no maps but with some internet gyan about the hill resort .Pachmarhi is a walker’s paradise and a favorite destination for trekkers. Wrapped in lush green meadows and rinsed by the many streams and waterfalls,guarded by ancient temple shrines , Pachmarhi is a place to enjoy your holidays away from the concrete jungle. I scouted for some “Poha Jalebi” which we had in Pipariya but to my distress none had it in the market. With no idea about the terrain just some information ripped from the internet,we thought to interact with some locals to get an idea ….. “idea jo duniya bada de” ,,,, he he he.

Much was known about the history of Pachmarhi owing to the interactions we had with the gentleman at the grocery shop. Pachmarhi was discovered by Caption James Forsyth in the year 1862 as a military sanitarium where medical facilities were set up. Later this town at an altitude of 3550 feet above the sea level became the summer capital of the Central Province during the British Raj period. There is a famous hill peak point known as Forsyth point giving an exemplary view of the mountain valley.This point was later renamed as “Priyadarshini point” after the name of our late Prime Minister Indira Gandhi.

While wandering for some time it was this kind-hearted gentlemen owning a grocery shop noticed us carrying the backpacks with a bewildered look on our face .. He called us upon and suggested to us something which became the mantra for us to traverse and explore the spectacle of this hill resort. The gentleman …, i am sorry i forgot his name ,though i wanted to account him in this narrative ,suggested we trek by foot through the town seeing the sign boards and the directions set out by the MP Tourism Dept.

Given below is the description of the trek which we had on the first day ,included a Rock Cave , picturesque waterfalls and streams coupled with prehistoric rock art.

Day 1 Day 2 and 3 Day 4: Exploring the island of Oahu. Day 4 was a conducted bus tour by the Polynesian Adventure…