In part 1, I talked about my journey to the Spiti Valley and the stay of two nights at the monastery of Tabo. As I left Tabo, I realized that the freshness of air and the ancient authenticity of the place is very fragile. Spiti Valley is opening up for tourism. While it is bringing economic prosperity to the region, it is certain that cultural transformation is unavoidable. Their traditional lifestyles are going to be challenged. New buildings are already breaking the architectural beauty and simplicity of the place.

No one is really sure exactly when buses arrive and depart. People generally wait at least half an hour in advance. It was not a long ride from Tabo to the little village of Sichling from where I walked 90 minutes uphill to the monastery of Dhankar. What a contrast to Tabo and what a spectacle! Tabo rests in a wide valley while Dhankar clings precariously to the crumbling cliffs. 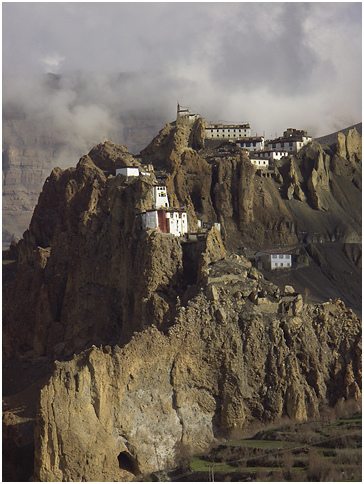 All monks of Dhankar, and neighbouring monasteries who were visiting Dhankar, were busy preparing for the Kalachakra ceremony planned for July this year. His Holiness Dalai Lama was to preside over this ceremony. Indeed, all monasteries of the Spiti Valley were busy painting, decorating and repairing their structures. Even prayers had been suspended on occasions to prepare for the Dalai Lama’s visit.

I arrived at Dhankar at lunch time. I was ushered into the dining room where about 25 monks of all ages sat on carpetted platforms lining the walls. As a guest, I was offered the best seat right next to the warm fire. Lunch was roti, rice and daal with a vegetable mix of pepper, cauliflower and carrot. I did not understand the local language of these monks but I understood their welcome smiles, their deference to guests and their simple routines.

Dhankar has much to offer. It has fabulous views of the valley and of Pindomor, a triangular piece of land irrigated by the rivers Spiti and Pin. The old monastery has little passages and stairs that take you back many centuries. Where in museums pieces of art are preserved like some lost tradition, here at Dhankar they line the walls as a living tradition. In particular are the scroll hangings in cloth, called thangkas, that are equally old and beautiful. 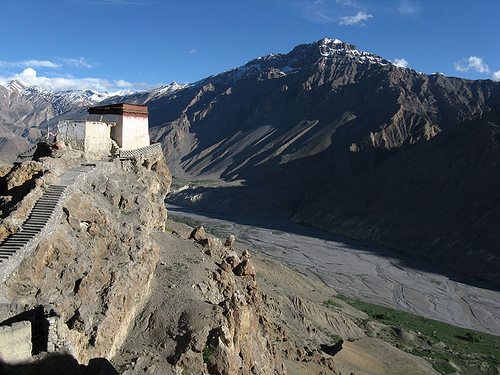 Because winter had frozen the plumping, there was no water in my building. I had to make do with a cold water stream coming down from the mountain. The weather was colder than I had expected. I did not have enough to keep me warm. By next morning I developed a fever that stayed with me for the rest of my stay in the valley.

A few decades from now Dhankar may no longer be here. With the passing of every winter, the melting snow whittles a little bit of the cliffs. There are NGOs working to save Dhankar. With a last parting glance at Dhankar and taking farewell of the busy monks, I started towards Lalung, a monastery about 3-hour walk from Dhankar.

The path to Lalung is easy and opens up many spectacular scenes, first of the Spiti Valley, then of the Lingti Valley. Here is a terrain that holds in every grain of sand, in every pinnacle and in every weather-worn cliff the history of the valley and indeed our planet. The path twists and turns, taking you deeper into the Lingti Valley. Suddenly you come to a magnificent view of Demul, a village 4,300m above sea level. The path to Demul is steep, the switchbacks deep and the climb long and hard. The village itself is shrouded ominously in black gathering clouds. It starts to rains over Demul, but where I am standing the sky is still clear.

I continue plodding the rubble path and I reach Lalung in good time. I enquire for teacher Padma at the local school. One of the little boys takes me to Padma’s house. I have a light lunch and a cup of tea. By now, my body is burning. I take some tablets and crawl under the duvet.

In the evening, I visited the monastery at Lalung which is known for its painted and gilded stucco sculptures, not unlike the ones at Tabo. There are legends relating to this monastery and links it to Tabo. The monks were away and only the head monk was there to receive me. He prepared a cup of tea by patiently grinding some tree bark and spices into powder. Tea in the Spiti Valley is not the same as in rest of India. He offered it without milk since he had none. Watching him prepare tea was like a ritual. It appeared that his entire concentration was in the simple acts of washing the cup, boiling the water, grinding into powder and filtering the tea. There was some inner peace and poetic grace in these little things he did. 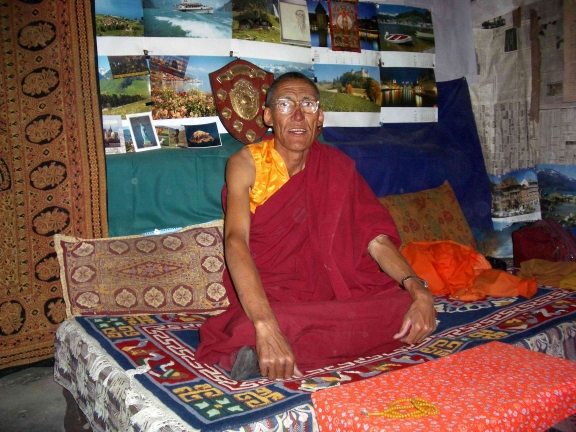 Abbot of Lalung Monastery who offered me tea. Source: wikimedia

Other than this memorable meeting with the head monk and the hospitality of Padma in her traditional Spitian mud house, my stay at Lalung was spent miserably in bed and my fever did not improve. I had to apologize for my poor appetite and my inability to enjoy Padma’s excellent meals. So the earlier plan to walk to Demul was abandoned. I took a jeep packed with 20 people, one guy sitting on my lap from Lalung to Kaza. At Kaza, I visited the local government hospital where medicine is free for all.

I checked into a hotel for a few hours, had a warm bath after three days, got some sleep before taking a bus to the village of Kibber at 4200m, supposedly the highest motorable village in the world. At Kibber, I met a boy of only 9 years old who the locals referred to as “lamaji”. It appears that boys are ordained into monkhood as early as 8 years of age. Couples normally have do not have more than two boys. The first one leads a normal like, looking after family, farm and finances. The second one becomes a monk. This is their custom. Young boys waiting to become a monk are given lot of respect even by elders.

After a night’s rest at Kibber, a cold place surrounded by snow-capped peaks, and removed as far possible from any other sign of life or civilization, my fever showed signs of improvement. Perhaps the alhocol of local barley I drank the night before helped me. I took the morning return bus to Ki monastery where I got more sleep and rest.

Life in the monasteries is not as easy as one imagines. It is not romantic simplicity. It is habitual hardship. Food is plain and without spice. Tea is salted and mixed with butter. Roti is eaten dry. There is no saag aloo, mater paneer or aloo gobi. Only for visitors the monks sometimes offer pickle, butter or jam. The terrain is barren and inhospitable. There is nothing to do except occupy oneself in study and prayer. Summer brings a little relief with contact to the outside world, renewal of food supplies and open vegetable cultivation. Winter is isolated, long and cold; a perfect setting to lose oneself in meditation.

At Ki monastery I continued to eat the meals of the monks. Lunch was just rice and daal. Dinner was thukpa with roti balls cooked in the boiling soup. Breakfast was barley powder either mixed with salted tea into a solid paste or mixed in a lesser proportion to form a gruel. They have this for breakfast every single day with no variation whatsoever. 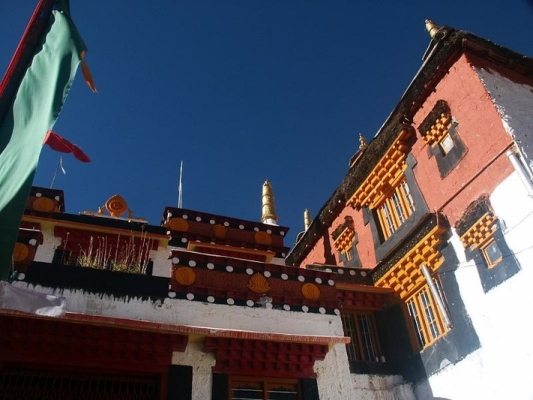 When I left Ki on the morning of 26th May, I had recovered quite a bit. It was time to leave for warmer climate and recover fully. I wanted to see more of Spiti Valley but I knew I had to come back another time. I left Ki at 0815 and started on a bus journey that was to be the longest in my life. The next day at 0615 I reached Chandigarh, almost disoriented with the continous twists and turns along the mountain roads.

Visiting the Spiti Valley has been almost a passing dream. Exotic, wild and remote, it came quickly and quietly. Before I could fully sense its reality I was out of it.

To begin with my first post, I am expressing my sincere thanks to Nandan and team Ghumakkar for motivating me to drive this long….