Guidebooks rarely make a mention of Mettur or at best underrate it in a few passing words. So if you wander into Mettur you will be taken by surprise.

For some Mettur is all about the dam, built in 1934 on the river Cauvery. The dam walls are impressive but a visit to this place in summer is a let down. There are two sluice gates, one for high level and the other for low level. Both are likely to be closed in summer. The reservoir behind the dam is vast but the water level is low. Even when the sluice gates are open, the fall of water cannot be more than 30 feet. The dam itself is 120 feet high. 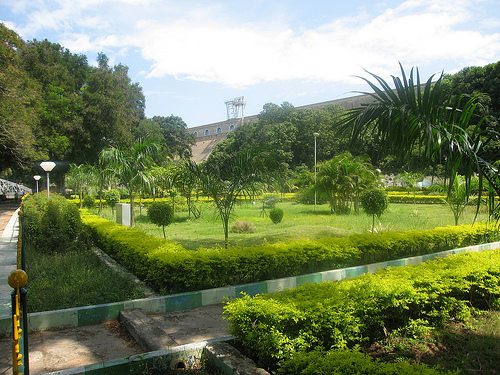 For others, Mettur is all about the twin parks laid out at the foot of the dam. Families, couples and friends come here to relax. Kids and even adults play in the swings and slides. A handful of deer graze in an enclosure. Eating is a big part of any Indian tourist. It is a curious sight to observe groups carrying loads of food baskets, steel containers and aluminium cooking pots into the parks. Around noon, the place is an open air dining area. When lunch is done, someone has to clean the remains of the day. Until then, the place is a mess. Just outside the park, is another curious sight. Juice is squeezed out of sugarcane. Raw mango is sliced and served with chilli powder and salt. Fish slices are kept marinated to complete redness. These are deep fried in oil when a customer has picked and paid for one.

I actually arrived at Mettur from Salem. This part of Tamil Nadu, Salem and around, is famous for mangoes. The parks at Mettur have lots of mango trees. This is the season and most trees were bursting with raw fruit. I was surprised that people were quite cultured not to pick any of them for their personal uses. 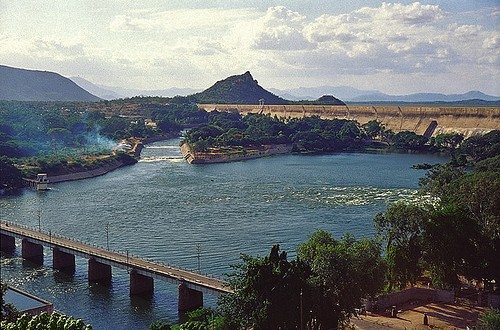 Coming from Salem by bus, the first view of Mettur is from a high viewpoint. The road hugs the hillside that drops steeply down to the valley below. The entire town is spread out in the valley. River Cauvery flows leisurely, its waters reflecting the afternoon sun. A bridge spans the river and leads to the town on the other bank. Behind the bridge are the parks at the base of the high dam. Beyond the dam, is the Stanley Reservoir with its vast body of water. All these elements of the landscape on their own are not impressive if you leave out the key element – hills. The reservoir is surrounded by hills in the far distance. Nearer are hills that seclude the town of Mettur from the landscape beyond. As such, we do not care what is beyond Mettur. Mettur sits cosily nestled in the valley, hugged by hills, fed by a river and kissed by the sun.

As the bus cautiously descends by the winding road, everything comes a little closer. Perspectives change. Scenes alter. The bridge that was once a thin strip takes us across the river. The town that was once a distant piece of fairy tale picture is what we enter in real life. The hills that were once visible silent guardians are now lost in a cacophony of traffic and conversations.

I ventured to one of these hills. I passed a village, crossed across some bare fields and reached the foot of the hill. The hill was rocky, consisting of large loose rocks and boulders. It was a typical South Indian hill of warm-coloured rocks that become golden at sunset. The vegetation on the slopes were medium sized shrubs and trees highly adapted to survive in this hot and dry climate. Cactuses from the ground weren’t many but there was one unique tree with cactus-like shoots, thick and spongy. When such shoots fall to the ground and dry up, they become as brittle as pappad. Another plant had similar cactus-like shoots but much thinner and more flexible. It wound itself on other plants for support. Except for such unique vegetation, the rest of it was thorny plants that made this hike quite a challenge. Since there was no clear path to the top, I had to battle with these thorns for most of the trek.

From the top, a magnificent view of Mettur opened up before me. I was tempted to continue my hike to the other hills in the area but my water bottle was already empty. It was 38 °C and it was 3 pm. The heat was intense. A short 60-minute walk to the top had drained me completely. It was time to return and find water.

A View of Mettur was last modified: October 6th, 2019 by Arvind