We were at Bombay, me and Uma and we landed up in a situation where we need to vacate our friend’s place and move to another place. This needed some out of the box thinking. The prospects of finding another job with a bigger salary were not very bright. And asking our parents for financial help was out of question. In fact, we had no face to show them and tell them the truth. However, sometimes a hopeless situation makes one think out daring and bold antidotes. Without worrying about the consequences.

Our solution – go to London

Our answer to our hopeless condition was to leave India and go to London – like all unemployed young men of that period. Hoping to build career and wealth. Since I had now got involved with advertising, I decided to follow it up. I started writing to some of the advertising agencies in London for a job. The idea was to get a job, and then join the evening classes, which were being run by the Institute of Advertising Agencies, London. But none of the people I wrote to ever replied. However, by now, we had made up our mind to leave and go to London-job or no job.

We had paid and booked our passage from Cochin to Genova by an Italian liner, Lloyd Tristino. And by train from there to London.So we packed up our stuff, left my job. We left Bombay for Cochin to catch the boat. We did not meet our families. We just informed them of our plan.

It took us two days by train to reach Cochin from Bombay. We reached Cochin two days before the sailing. Here we stayed with one Mr. Prasher, a Naval Officer, who showed us the whole city, and took us to his ship, INS Mysore. That memorable two-day stay that relieved lot of tensions at leaving Bombay.
We left India on 19th September 1958 (see the Passports).
 

 We had about £ 50 between us, after paying all expenses for train to Cochin, and further travel to London. Plus, our travel agent had told us that he would send an additional £ 30.

The sea voyage in a lower deck
We were among the hundreds of hopeful Indians, boarding the ship, in search of better life and future. Since we had paid the lowest fare, we were directed to the lower deck. The cabin allotted to us had ten other passengers-all young, and we knew a couple of them. Some of them were going to Germany and France, while the rest of us were bound for London.
 

Uma Sethi, right, with one of our shipmates, on the ship Lloyd Trevino. 1958.

My wife was the only female in the lower deck. Being all of almost the same age, we got along famously. All of us first time travelers, feeling seasick. The sea was pretty rough, and the food on the ship was disappointing. But we didn’t mind. The prospect of getting to London kept us cheerful.
  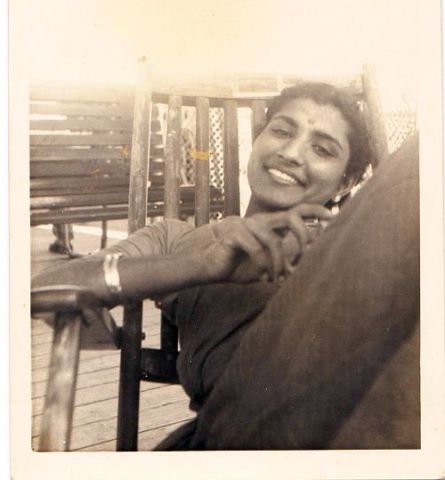 Aden was the first port of call. And we went around the town with other passengers. Every one wrote a postcard to their families 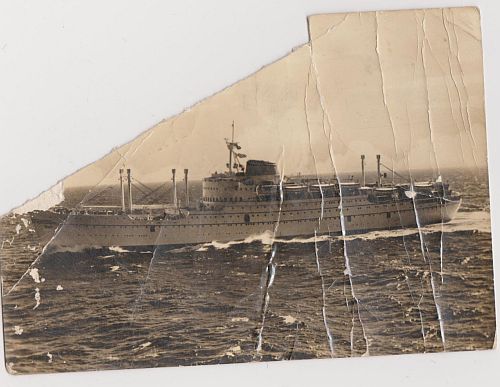 Time passed, with Fancy Dress competitions and other ship activities.

It was at Port Suez that we all got down, hired a car, and went to see Cairo, the city. Local people recognizing us as Indians (it was a common sight on those days) would shout “Nehru, Nehru, and Nasser.” We saw the whole city – quite beautiful. We then visited the Pyramids, typical tourists, but none among us had brought a camera. No photographs. We then reached Port Said, to catch the ship, where she had already docked and refuelled. Here an interesting episode happened.

As the ship was almost sailing out of the port, quite a few Dhows came along, selling shirts. Beautifully packed in cellophane covers. Dazzling white shirts. Priced very low. Since the boat was almost sailing, almost everyone on the ship rushed to buy these shirts. I bought three, thinking I was getting a good bargain. Once the ship moved out into the open sea, some of us opened the covering to look at the “Loot.” Surprise, Surprise! The shirts had only half front and half collar, backed with hard card – it was half a shirt! The scoundrels! They took advantage of us with “Nehru Indian special price.”

The End of the Sea Voyage – Beginning of the Train Journey
Our tickets covered the train journey through Italy, Switzerland, and France, and then the boat train from Calais to the Victoria Station London via Folk Stone (England). This journey turned out to quite an adventure, starting from Milan, Italy.

When we landed in Milan, we were told to catch a train for England from here or Rome. If wanted, we could travel around Italy on our own, and catch the train after sightseeing in Italy. So, Uma and I, an ignorant but happy adventurous couple, decided to roam around Italy. First of all, we learnt that porters everywhere were very expensive to hire. So, carry your own bags – and that we did, throughout this journey. We had two big bags (without the wheels, in those days). We carried one bag each.

It was beginning of October in 1958 when we reached Milan. We decided to walk around the main road and look around the shops and buildings. Two strange looking aliens walking with their bags. The lady, my wife, wearing a strange garment – a 6 yards Indian sari – stopped all the traffic. People stopping their cars, coming out, and gawking at her – shaking hands, giving very appreciative Italian looks. Gave us lifts in their cars – all Fiats. Pity was that we did not understand what they were saying; and neither did they. See the letter that Uma wrote to her parents. 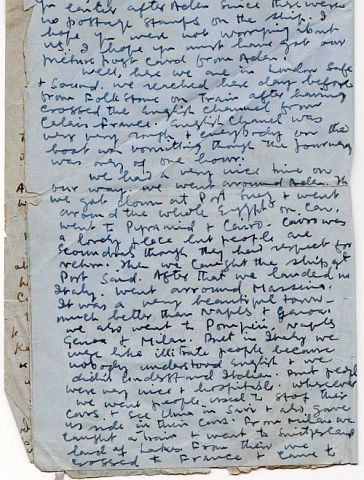 Letter from Uma to her parents. October 1958

 
We from Milan went to Massina, which was a beautiful place, better than Naples. Then, we visited the great Pompeii in a horse-driven carriage. We then reached Rome to catch our train. We stopped at one of the roadside cafes. Asked for a Coke. Not knowing the money exchange rate, we were shocked to pay 16,000 Lire for Coke which used to cost 4 annas (1 Rupee =16 annas) in India in those days. Of course, we had the Italian currency, Lire, with us, and we paid in those long, unwieldy notes.

We managed to reach the Rome Station, carrying our bags.

Wrong train, wrong carriage
Now the problem started. The Language. No one could answer our query as to which train to catch for France. After great difficulty, we were pointed out a train at the next platform to catch. That’s what we thought. So we marched to and got into the train, which was quite crowded. Our Passports were checked by Italian officers, and we were allowed to travel.
At about midnight, the train stopped, and new immigration officers came in to check passports. After examining our passports, they asked us to get out of the train. We finally understood. The penny dropped (we learnt this phrase while in London).

This train was not going to France via Switzerland, but was entering Germany. And we had no Visas for Germany. Our visas were for Italy, Switzerland, France and then to Britain. At midnight, we were thrown out of train.

Help from unexpected sources
Luckily, at the platform, one lady pointed us to a train, almost shunting out of the next platform. We literally ran to catch it. We threw our bags into the nearest compartment, but were unable to get in. So we were helped to enter (almost pushed in a moving train) the next compartment. As it turned out it was the right connecting train. But we were worried about our bags, being in a different place.

At the Switzerland border, when the local police came in to check the Passports, we were helped to move into the same compartment as our luggage. Luckily, the bags were safe. We did not realize that we were no longer in India!

The passengers were very helpful, giving us seats. We all talked by gestures, as we were still in a place where people did not speak English. They offered us their bread and wine to drink. All the passengers – French, Swiss, and Italians – were carrying yard long brown bread and a bottle of wine. After crossing into France, we felt much closer to London.
Surprisingly, we never felt panicky throughout this journey. And the wonderful feeling was that my wife, not used to all these problems, never said, “Oh, God! What have I got into with this man?” Since that day, and till today, decades after, I love her much more than ever.

We finally reached Calais, in France, and were directed to the Ferry Train that would take us to our dream town, London. Although there were quite a few Indians, but no one talked, because everyone was sick. The English Channel was very rough till we reached Folk Stone in England. Last stop before we reach our destination.

“Home” at last – Victoria Station, London
Once the train stopped at the Victoria Station, London, and the doors opened … my god, there was a very welcome burst of crescendo of joyous shouts, mixture of different languages of Indian   and Pakistani region. We heard mostly Punjabi mixed with English. The platform was crowded with expectant relatives. Friends and others. It was a sight to see: hand-shaking and embracing going on all over the platform. Slowly, but surely, they all started moving out of the station.

And, then, it was suddenly, all quiet.
We were the only two, last to come out of our compartment, left on the platform. No one had come to receive us. We did not know a soul in the whole of Britain. And thus finished our long travel. From Bombay to London.

Voyage to London from Bombay, via Sea and Road in 1958 was last modified: January 2nd, 2022 by Jatinder Sethi