I had heard of Ovalekar Wadi Butterfly Park since nearly a year, and I was looking for the right time to visit this unique private butterfly park near Thane. As readers probably know, Thane is adjacent to proper Mumbai, and is governed by Thane Municipal Corporation. It is a fast-growing bustling city that is part of the Mumbai metropolitan region. Serviced by buses that are run by the Thane Municipality, trains run through it both ways on the Central Railway, and one can reach Thane easily from CST in less than an hour. 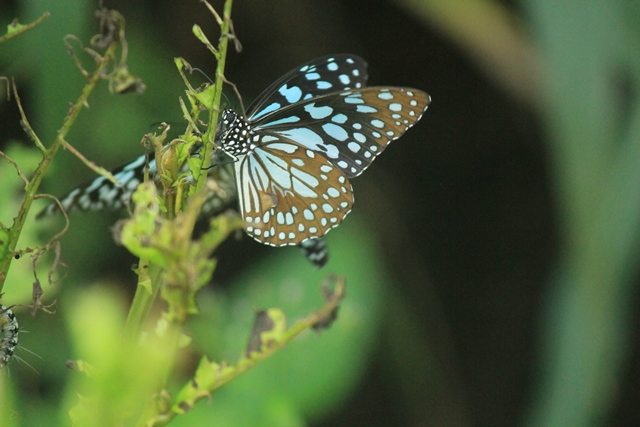 Rajendra Ovalekar recounted how he and his brother, assisted by other family members, decided to develop a butterfly park privately. They owned these 2 acres of land in Ovale village, and, as Rajendra reminisces, he was always awed by the colours and varieties of butterflies as a young adult. He decided that he would do something about this after his viewing of these beautiful fliers during some of the nature trips he undertook on behalf of the Bombay Natural History Society in the early 2000’s. 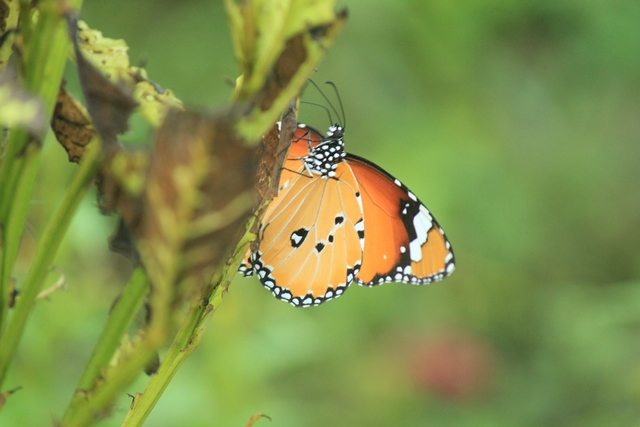 Almost looks like a dry leaf - A good camouflage

To reach the park, one has to catch a train from any station on the central railway network and get off at Thane. From the Western side, one can climb on to the ramp that leads to the Thane Municipality Transport (TMT) bus depot, and ask for buses that go towards Yeoor Hills or Suraj Water Park. Or one may choose to hire an auto-rickshaw and ask the driver to take them directly to Ovale village that is just beyond Patlipada police station or the main entry road to the Brahmand complex. If one is driving from south Mumbai, one has to reach the Eastern Express highway (NH 3) and drive straight down it till the turn off for the Ghodbunder Road. The distance from Byculla to Ovalekar Wadi is about 41 km and can be covered in an hour or less if you drive there in the morning. The left turn to reach the Wadi is just a few hundred meters after the main entrance to Suraj Water Park. It is a thin lane, and one bypasses private wadis and residences. The main gate of Ovalekar Wadi is about 700 m inside the turn off.

Mr. Ovalekar is there at the gate with a big smile as he guides cars and walking visitors inside his park. One has to enter their name and contact number in a ledger and pay Rs. 50-60 per head as the entrance and guide charge. One has to drive one’s car down a narrow kachcha road for about 50 m and then turn it on to a verdant green open space where at least 20 cars can be parked in decent comfort. 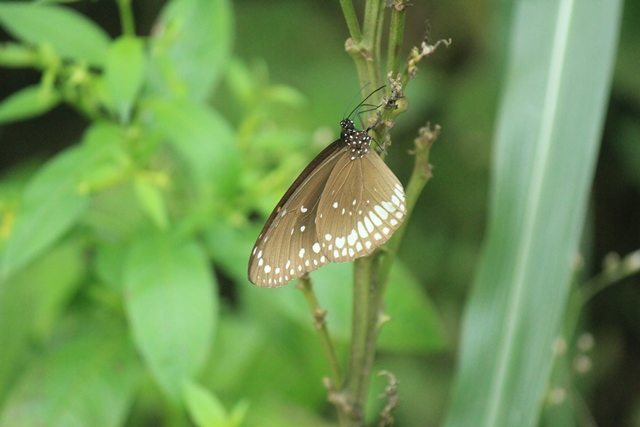 When my daughter and I reached in our own vehicle at 8:00 a.m. on Sunday, 16th October 2011, busy shutterbugs were already spread out all over the place, mounting their expensive digital SLR cameras on equally expensive tripods and moving from shrub to shrub, taking photographs for their own collection. Butterflies were visible all around, and the sight of all this hustle-bustle was so exciting that one wanted to immediately jump off the steering wheel and bring out one’s own camera and lenses to begin shooting. However, I maintained decorum and went and parked our car first. Then, we walked back to where Mr. Ovalekar stood with his ledger and wallet, imploring visitors to enter their names and gently demanding the ridiculously small sum of Rs. 50-60 per visitor.

We were told to look around and then assemble for the “official tour” at half past eight inside the shed created in one corner of the park just beyond the parking area, where there were chairs to sit, large illustrated boards which displayed paintings of the different species of butterfly and moths which are seen here, and also a counter where they would sell some snack items later in the morning. 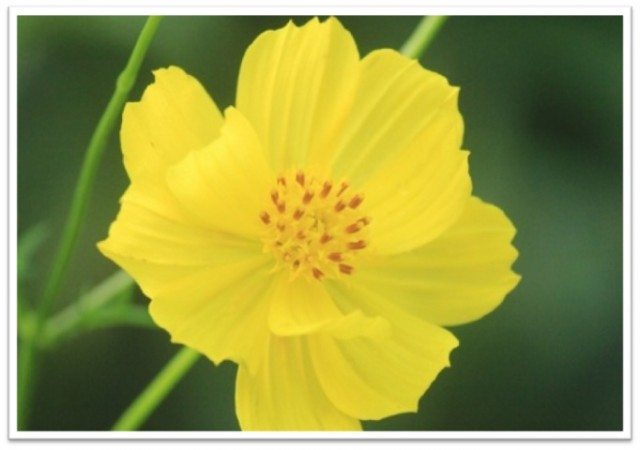 One of the many flowers

Our initial, untrained eye could spot just three or four species of butterfly. My daughter and I both got busy taking pictures, not just of the butterflies but also of the beautiful and colourful plants and flowering shrubs that were spread all around. There were yellow and orange cosmos flower-bearing shrubs all around the park, as also lovely white flowers with a crimson red centre, nectarine flowering plants (the Jamaican blue nectar plant). We were also told that such and such plants were Cosmos plants, and I have a photo of a cosmos flower here. 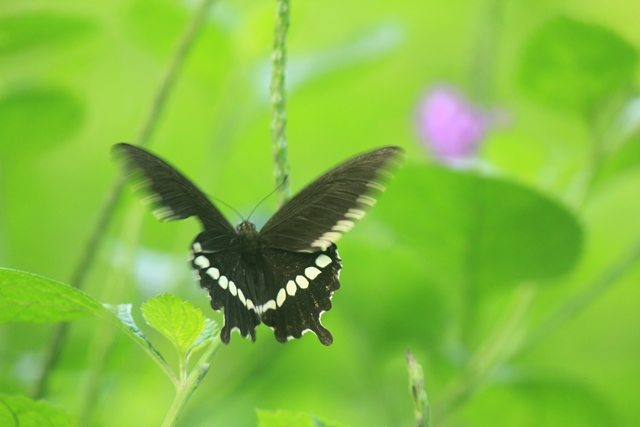 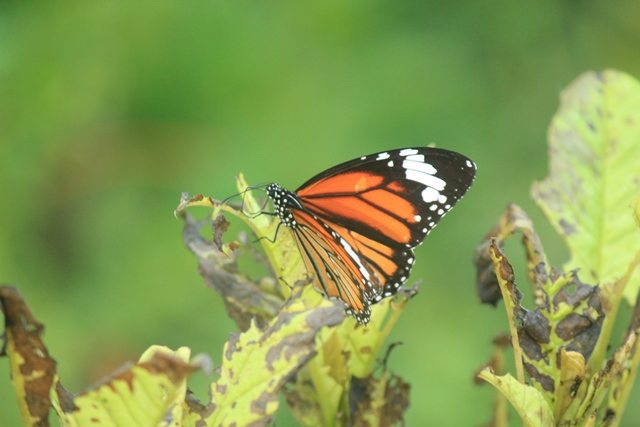 After some 60-odd visitors had gathered, we were all assembled in the official area where Mr. Ovalekar spoke for about ten minutes on his passion and how he developed the butterfly park. After that, he started his official tour with the sighting of a blue tiger butterfly’s caterpillar. From then on, the group was taken all around the place and Mr. Ovalekar kept all of us in thrall as he pointed, first here, then there, then up, next down, as butterflies flew past us, unmindful of our need for them to sit in one place and let us admire them. We saw the Blue tiger butterfly, the Striped tiger, the Plain tiger, the Glassy tiger, the Dark blue tiger, the Common crow, the Common Jezebel, the Common rose, the Swallowtail, the Common grass, the common piaro, the giant mormon, the common Baron, the Bush brown, the Skipper, the Evening brown, the common wanderer and many more varieties of these lovely creatures. 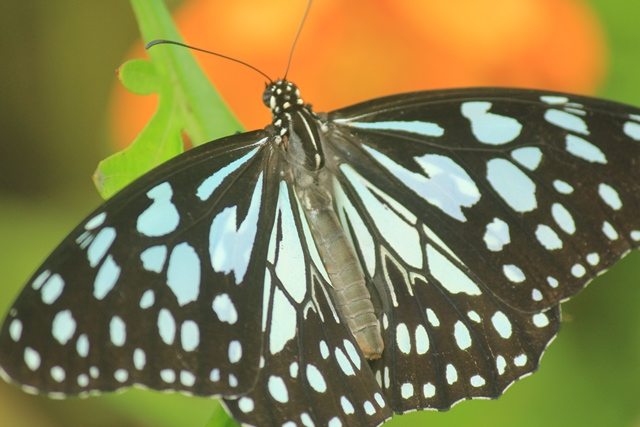 Gradually, the group thinned out as some of the visitors had had their fill, and began to leave or to go in the shaded area where “breakfast” was being sold at a rather high price (a wada-pav and a small plastic glass of tea was sold for Rs. 30/= each). Nobody minded since we had had a veritable visual feast for just Rs. 50/=! 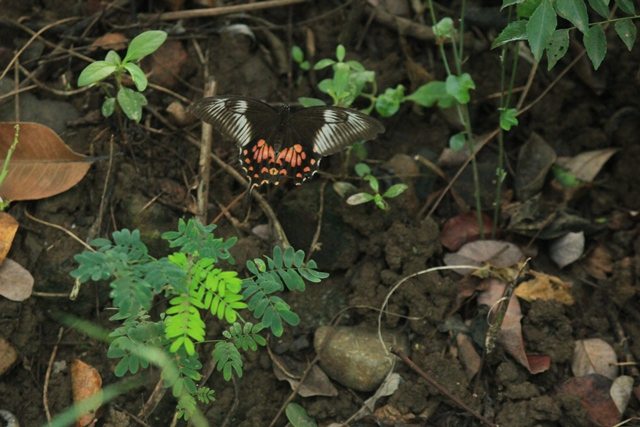 By around 11:00 a.m., My daughter and I had also had our fill of this place and we decided to leave. We took back with us about a hundred different memories of a morning well-spent.

The entire ambience is soothing and spiritual with kirtans being sung by the gurus sitting inside the temple. Even though the entire journey from the start of the line till one enters the actual temple where the Guru Granth sahib is kept and Gurbani is recited takes about three hours, thousands of people from all castes, creeds and ethnicities throng the Golden temple every day. The temple is open all through the day and night except from 12am to 3pm when the routine cleaning takes place. Awaiting their turns to enter the holy chamber the “Ekonkar” mantra is chanted by all the devotees. The environment is extremely divine. Despite of the rush, a true believer in God can easily connect with the creator here. The actual darshan is even more mystical. One feels as if one has attained the ultimate peace.