In the last post we discussed Grishneshwar Temple. Our next destination was Ellora caves which are situated just one KM away from the temple. Shared taxies and autos are available from temple to reach Ellora caves. We took one auto and reached there in just five minutes. Caves of Ellora are 28 KM from Aurangabad and one km before Grishneshwar Temple. The road passes by the base of Daultabad fort.

The caves excavations are on a sloping hill side. They are spread over an area, from North to South, of about two kilometers. All caves are west facing. These are maintained by ASI and have an entry ticket of Rs.10 for Indians. A lot of autos and guides are available near the entrance. There is also a cloak room to keep your baggage. We hired an auto in Rs. 200 to show all the caves. Auto driver also worked as guide to us.

The Cave Temples of Ellora, are representations of three religious systems- Buddhism, Brahmanism (Hinduism) and Jainism containing elaborate carving of Gods and Goddesses and remarkable memorials of the three great faiths. These were built between the 5th century and 10th century. Caves 1 to 12, making the southern series, are Buddhist. The next seventeen (13-29) belongs to Brahmanism, caves 30 to 34 are in the Jain group. These are built in proximity; demonstrate the religious harmony prevalent during this period of Indian history. 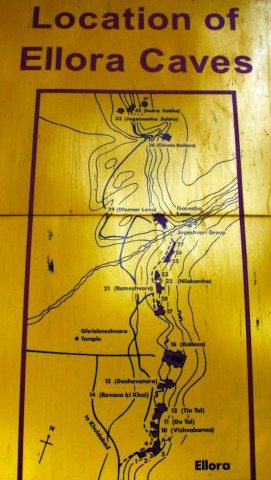 The entrance and the taxi-parking ground faces cave 16; in the Brahmanical series and visitors are apt to make their starting point. However, it is advisable to walk down south, begin with cave no. 1 and proceed in the right direction. Having seen the southern and middle series, it is best to took taxi/ auto and take it one and half kilometer up the road to another part of the hillside where the Jain caves are situated.

Auto driver took us first us to right side for Buddhist caves and then took us to extreme left for Jainism Excavation. In the last he returns to center point for Brahmanical series caves.

In this post we will focus on Buddhist and Jainism Excavation.

Cave 1 is the possibly the earliest excavation at Ellora. It is a plain vihara with eight cells.

Cave 2 which look like a chaitya hall has twelve massive columns with cushion capitals to support the roof. The lion throne that holds the huge Buddha image is a symbol of the royal state. 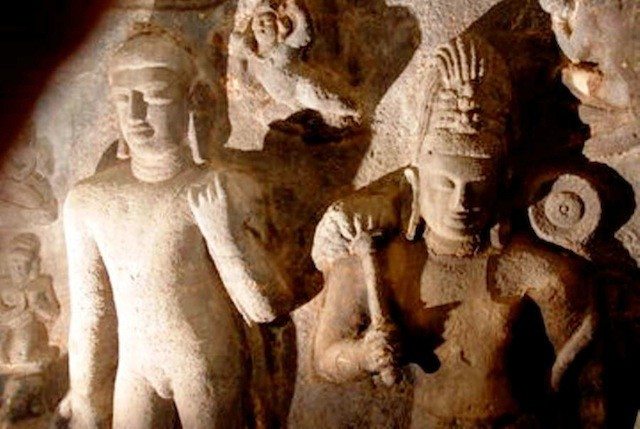 Cave 3 and 4 left as advised by driver as they were not worth seeing.

Cave 5 the largest in the series is viahra, 35.6 meter by 17 meter and has in addition two side recesses. 24 pillars hold roof. The cave was used probably as an assembly hall or for delivering lecture.There is a usual Buddha image in the chapel. 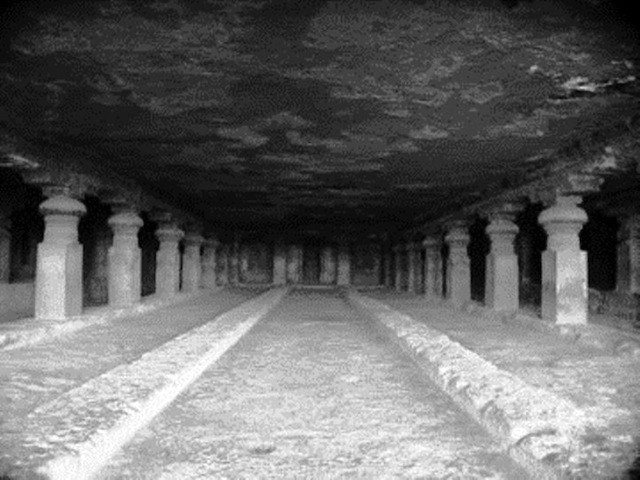 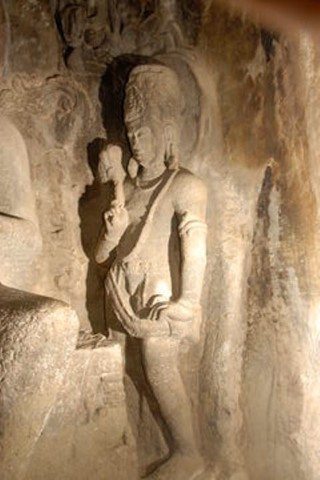 Cave 6 is mainly notable for its ante-chamber which has several interesting sculptures. An unexpected innovation is the figure of the Hindu goddess of learning, Saraswati-wellknown in India for the same representation. 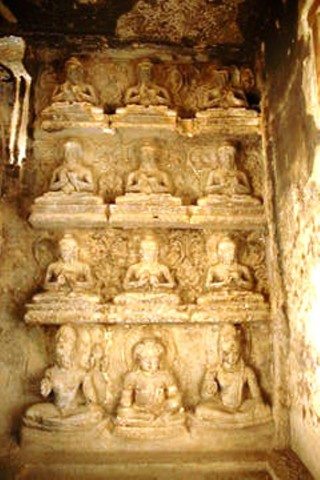 Cave 10 is the only proper chaitya-hall at Ellora. The façade richly decorated has the semblance of masonry work. This cave temple is dedicated to Vishwarkarma, the architect of the Gods and the patron saint of many Indian artisans even today. A staircase leads to a large pillared court and to a gallery with a railed terrace. 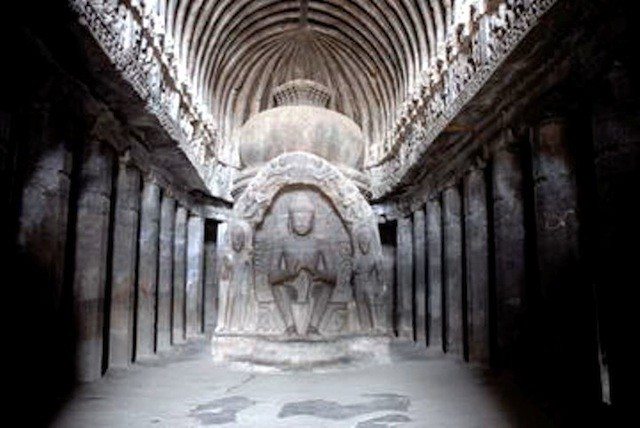 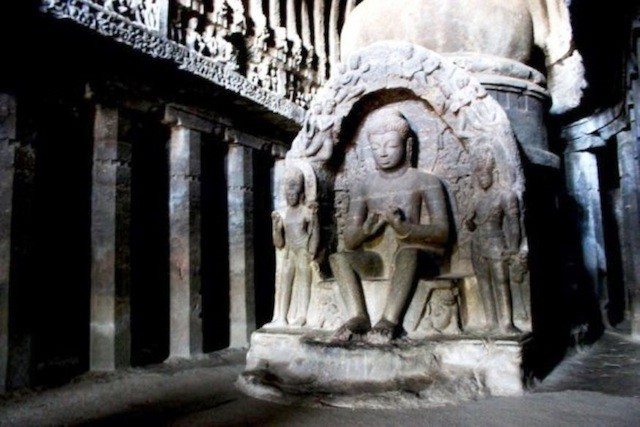 Cave 11 and 12 are by far the most important in this group. They are large, three structures alike in design and represent the peak of the earlier style at Ellora. Cave 12 is the bigger of the two and more impressive. The façade is 50 feet high; plain in austere looking .It has two stories. Inside it has large Buddha picture in both floors. 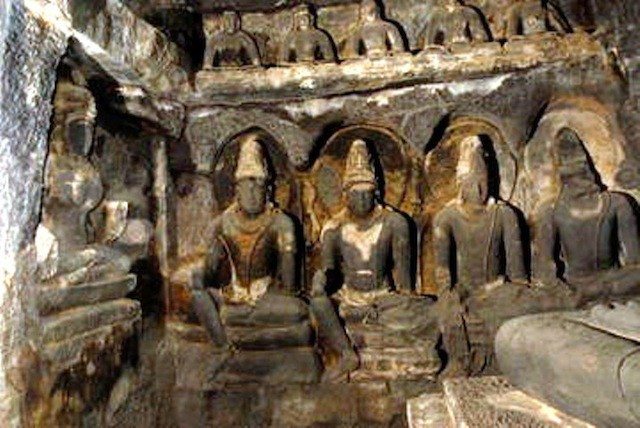 More than a kilometer away at the northern spur of the ridge, there are the Jain excavations (30-34). Jainism was founded in the sixth century before Christ, at the same time as Buddhism; though it’s early beginning go back a further few hundred years. It is still a living faith among certain section of the people. These excavations belong to the period between the ninth and eleventh centuries. The visitors may confine their attentions to Caves 32 and 34 only.

Cave 30: This cave being the like cave No. 16 is called ‘Chota Kailash’.Pillars and ceiling are adorned with carved lotus flower. There is an image of Lord Mahavira in it. 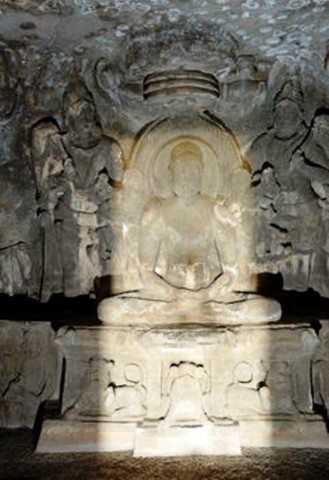 The seated figure of Mahavira in cave 30

Cave 31: It has images of Jain Tirthankara’s.

Cave 32: It is known as Indra Sabha, assembly hall of Indra, the king of Gods. The entrance has a stone elephant and a 30 feet column reminiscent of Kailasha. Close by is a decorative shrine, its ceiling carved into a symbolic lotus. This has a figure of Mahavira, the founder of the Faith. Mahavira was the twenty fourth and last of the Tirthankara’s. Of these, the twenty third on the list, Parasnath is seen in the chamber at the left, guarded by the serpent king, in a familiar grouping of male and female attendants. In this chamber, Mahavira is seated on a lion throne.

The upper storey has a verandah and a big hall with decorative pillars> It may be noted that while Jain images have a peculiar heaviness, the pillars and walls of the caves carry ornamental work of great delicacy. “No other temple at Ellora is so complete in its arrangement or as finished in its workmanship as the upper- storey of the Indra –Sabha.” 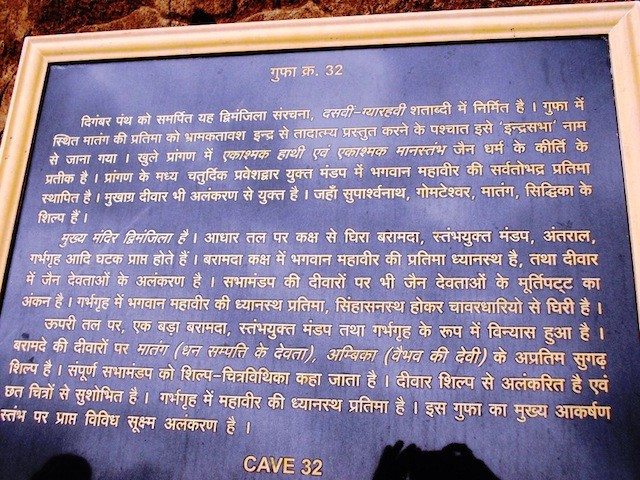 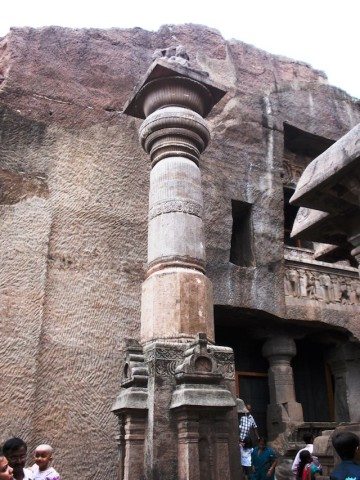 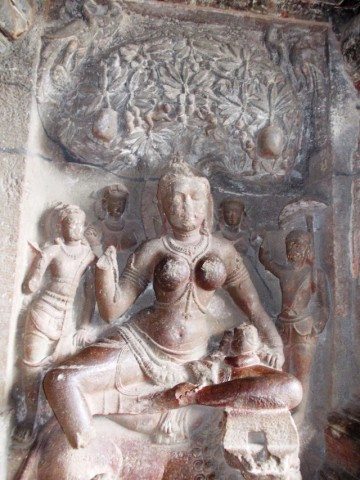 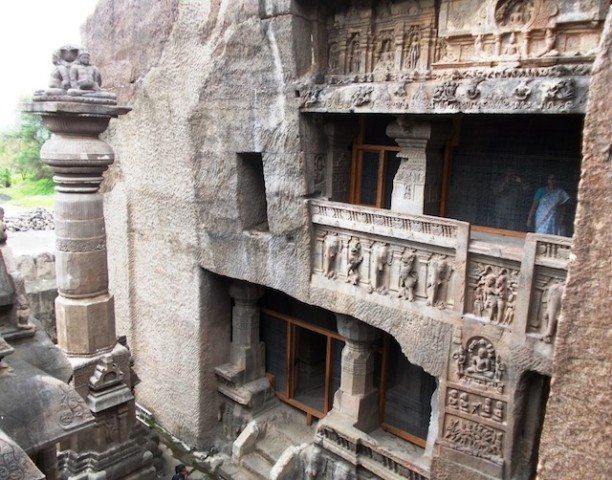 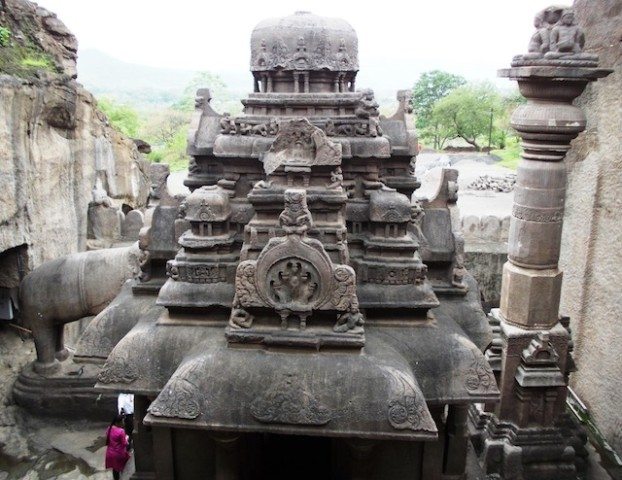 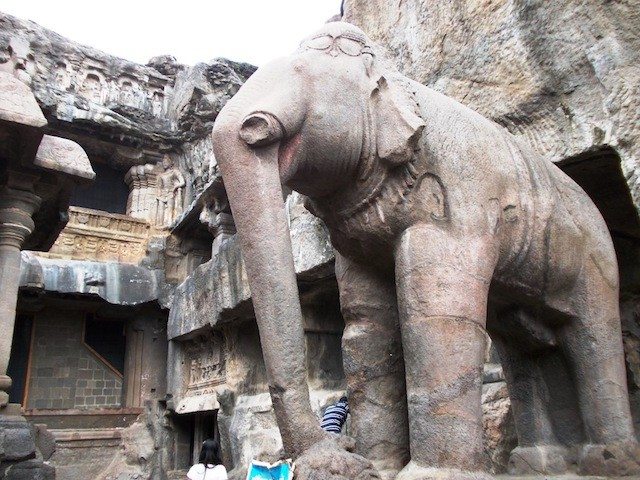 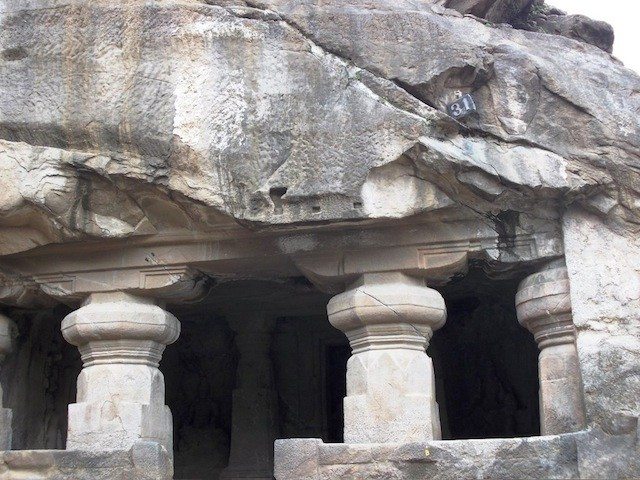 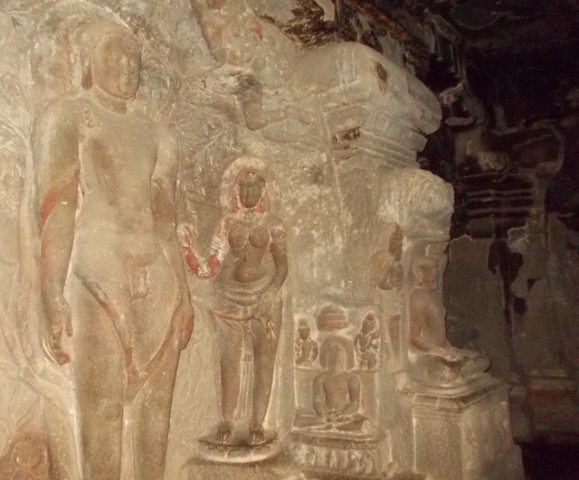 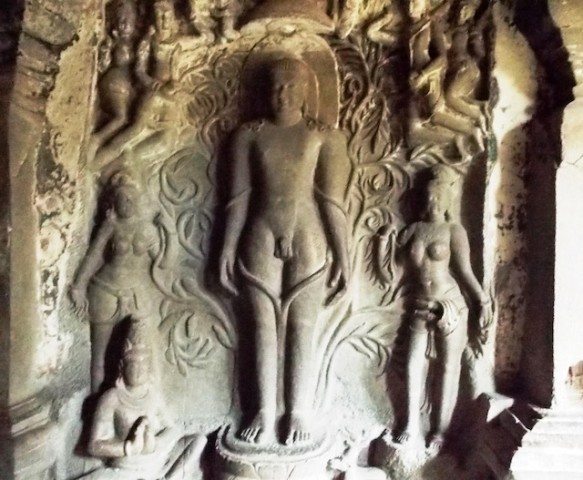 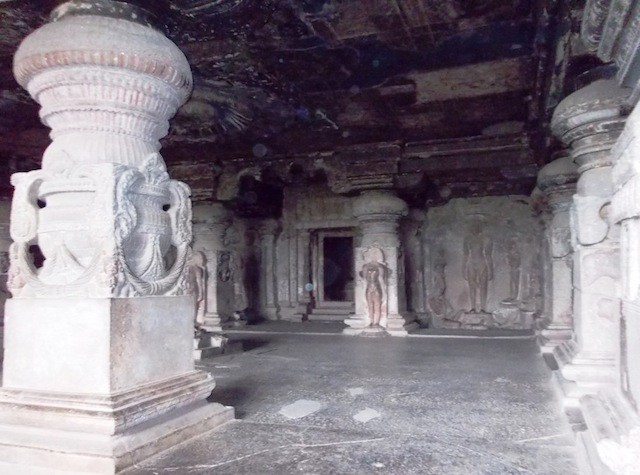 Cave 33: The caves have the figures of the Jain saints and their attendants. 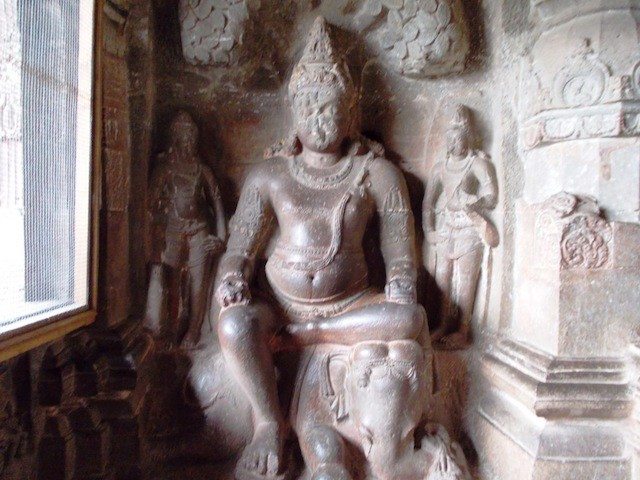 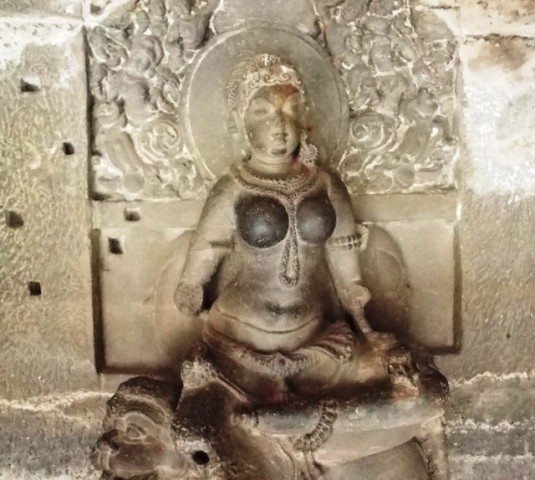 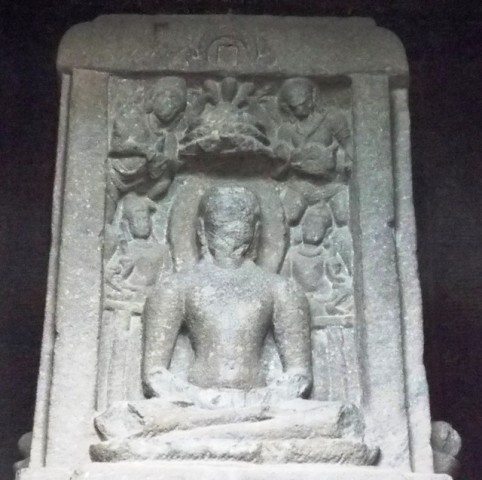 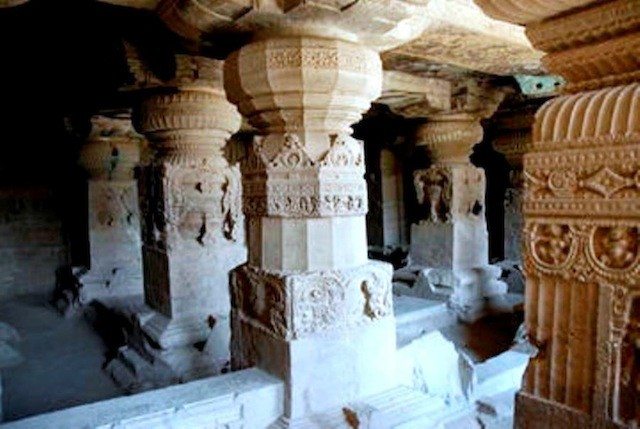 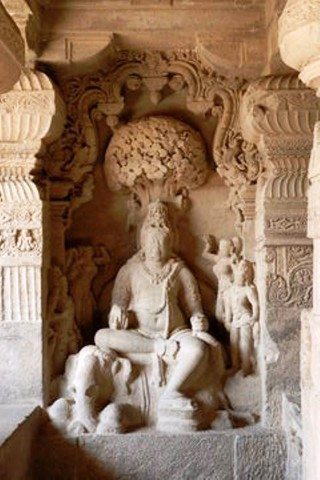 Cave 34: is best reached from Indra Sabha by a communicating passage with rock-hewn door at the left of the western shrine. It has of course a separate entrance a swell, with a finely carved arch. The figures are again of the Jain saints and their attendants. Some of the best example of Jain sculpture are to be seen here in the decorated pillars and recesses in the walls. 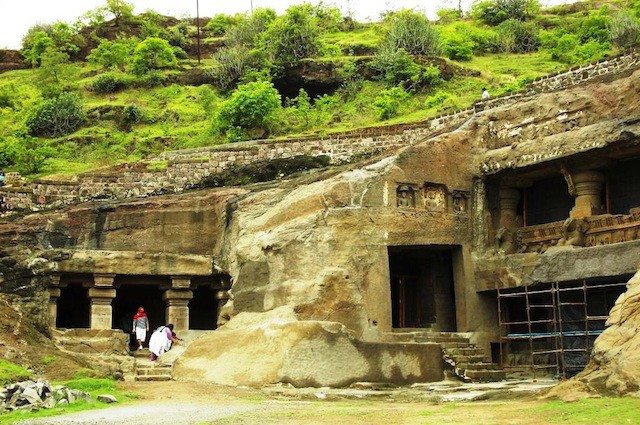 The greenery around caves

Note: Many caves are deep enough and have no light source. As we were having basic P&S camera, many pictures are of poor quality. I have chosen some ‘figure among ciphers’ type photos for the post.

Next post on Brahmanical series (Ellora Caves No. 13 to 29.)