Sometimes you feel the need to escape somewhere, somewhere unknown, yet with a soulful connection. With this thought in my mind and along with a bunch of such like-minded friends, we went out on an early morning road trip to a destination which was comfortably nearby to our city Guwahati but yet we never had the opportunity to explore it.

Pobitora Wildlife Sanctuary
Lying just 32kms drive from the capital city, this wildlife sanctuary boosts of a home to about 2000 migratory birds and the famous one-horned rhinoceros. It is flanked on the northern side by the hill range of Raja Mayong (named after the famous nearby village of Mayong, famous for sorcery) and the great plains of Sonapur on the south.

The journey started by taking the shorter route of Narangi – Chandrapur village – Digaru village. There exists another route via State Highway 1 through Sonapur. The best part of the route we took was that it runs along the majestic Bramhaputra river for a major part and then it goes through some of the scenic and ethnic villages in this part of the country.

The actual drive starts after crossing the Panikheti railway crossing where the city limits ends and the Brahmaputra starts to show its glimpses. 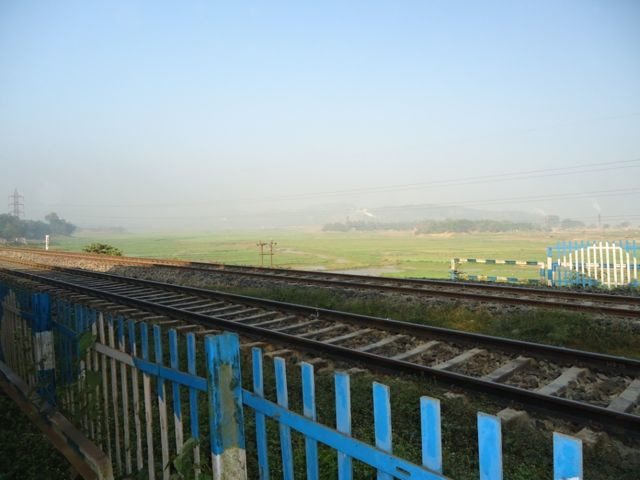 The cool and refreshing breeze from the river immediately grips you. The part of the drive takes us through Chandrapur village, which is usually known for its dairy farms and an important electrical sub-station for Guwahati. After Chandrapur, we enter the Morigaon District. In here, lies the Digaru village, Pobitora and of course, Mayong.

I simply cannot skip Mayong here, because of the mystery and excitement that surrounds it. Mayong, as taken from the Sanskrit word “Maya”, means “illusion”. It is related with the Mahabharata, where the Chief Ghatotkacha of Kachari Kingdom (a tribe) took part in the great battle of the Mahabharata. There are lot of stories about the famous black magic practices and healings that took place here in the earlier times and it is said that even now saints of black magic and the witches take shelter in Mayong forest.

Going forward, we reach Digaru. Digaru is a small village, mostly known for its rich agricultural fields and the Air Force Station of the Indian Air Force. 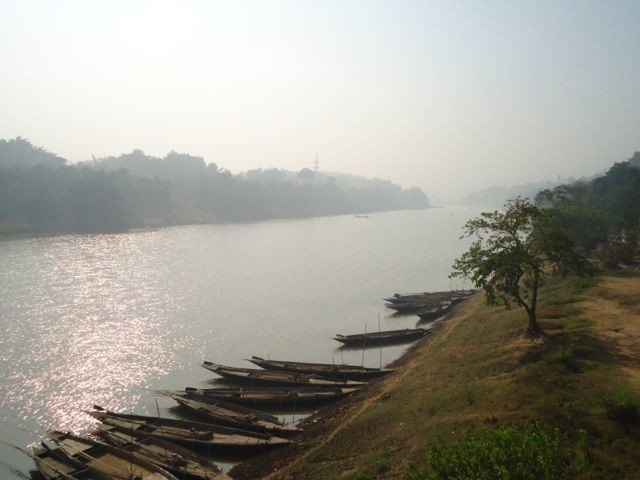 From Digaru, it barely takes a 15mins drive and few turns and we reach our destination, the Pobitora Sanctuary.

Luckily for us, there was a Pobitora festival going on during that time. The festivals mainly consists of stalls by the locals, for displaying the traditional handicrafts and the sumptuous dishes. We had a healthful breakfast of Shira, doi (traditionally prepared curd) and lusi – bhaji (the Assamese Ishhstyle puri sabji). 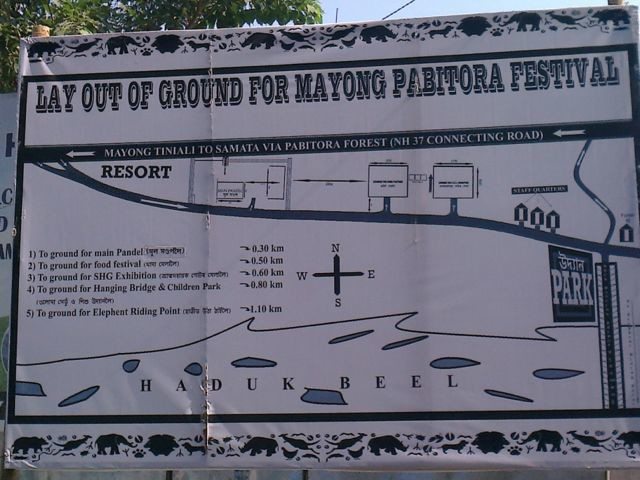 The map of the ongoing Mayong Pobitora festival

Time to move on for the real exploration. We took the luxurious option of safari ride on a reliable and sturdy, open-top Maruti Gypsy. The safari ride started with a bumpy ride along a very dusty road. The entrance to the sanctuary was more like a dry barren paddy field. Our spirits instantly took a plunge. 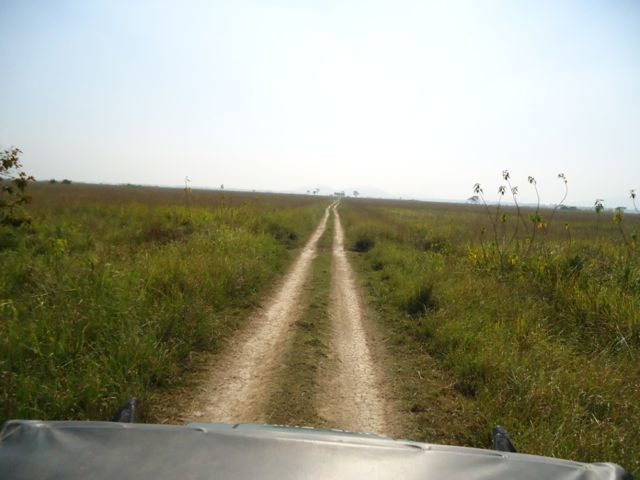 This is just the beginning of the wildlife ahead

But the scenery changed drastically in a few minutes. We were greeted by some lovely water-bodies and of course, some rare migratory birds. This was not the exact season for such birds but still we witnessed quite a few, specifically the Pied Harrier, Purple Heron and the Black Bittern.

Further ahead, the scenery again changed. We were drawn more deep into the actual jungle. The forest cover got dense and our excitement jumped higher. Under the shade of the trees and some swamps, we found a herd of the world renowned one-horn Rhinos. It was not the first time in my life that I encountered them but still, they being the pride of my State, rakes up my pride too. 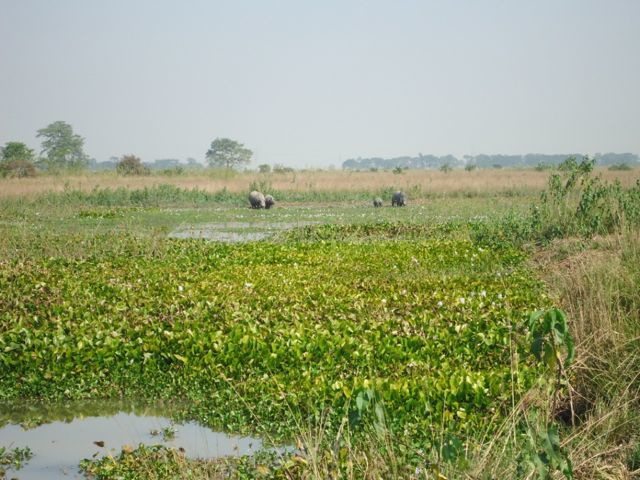 The pride of India & the State of Assam..the One-horned Rhino

Our Gypsy driver suddenly had a rush of adrenaline and after few minutes of some sway-and-swanky driving, he brought us into this clearing, which was clearly bang in the middle of the forest. With a few words of prayers, we de-boarded our vehicle for a photo-shoot!!

Now, you must be wondering, why we were having a photo-shoot when we had prayers in our lips. Well, that’s because inspite of the heavy forest cover, the view and the vibes took our breath away.

That moment, that location actually gave us the sense of being in a real jungle (although, it was not a proper jungle in comparison to other great jungles of our country). Lined with big trees in every direction and not a sound of a leaf, we just lost ourselves to nature in that moment. 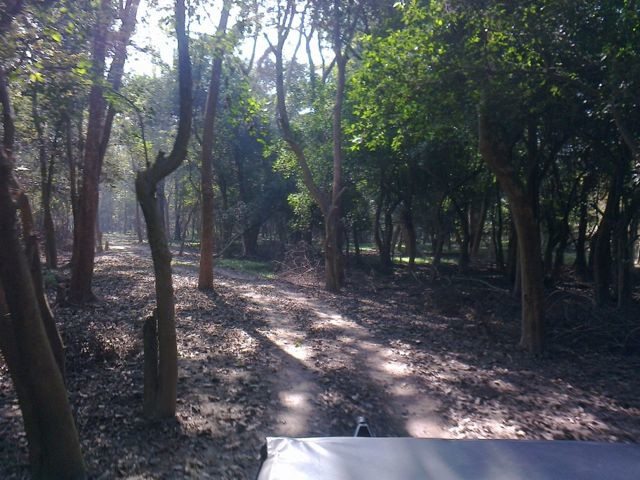 Right at the very depth of the jungle

After a few clicks, our driver warned us to step back in to the car since it is not safe to disturb the habitat of the particular residents (Pobitora also boosts of a number of leopards, wild bear and the civet cat).

The safari again dropped us back to the entrance of the bustling festival and we were back among civilisation. After another round of local delights as our lunch, we started our way back to our abode, Guwahati. 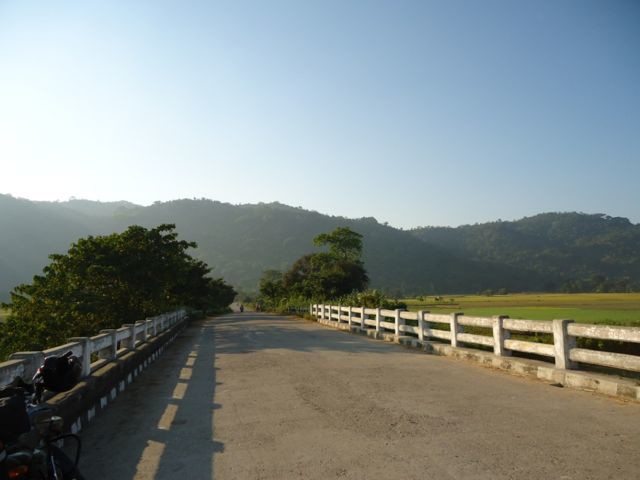 The fresh air never leaves you during the entire journey

This trip had nothing unique nor anything “mind-blowing” to talk about. What this trip had was that even a small place like Pobitora can give us a needful break from the city and infact, we should not skip such delights since Guwahati being my home-town. As popularly said, “the distance you travel, the more you experience”. Indeed, why not travel when life itself is a journey in its own.

Well, our trip didn’t end here. We had a small stop-over at Hatishila. It’s a isolated river-front, just before entering the Guwahati city limits. This place is the one-stop destination for all picnic goers from our city. We witnessed the evergreen sunset on the river bank, which finally announced the conclusion to a wonderful day and a wonderful trip. 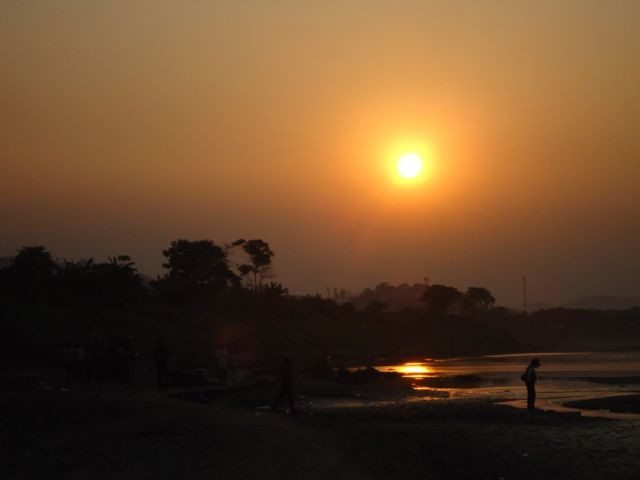 A beautiful sunset to a amazing trip @Hatishila

a traveler who still has many miles to go

Kids should always carry a backpack for themselves. I’ve faced this problem with my mother and father. When we started traveling my mother and father used to keep my kit and my books in their bag, so I used to ask a lot of times then they used to get really irritated and I also. So from then I suggested that I will take my own bag on the trips so my mother father bought me a bag.