The joke of the month is, by fellow Ghumakkar Srijan , that I do not get train tickets. The Indian Railways ticket reservation software refuses to let me in. And I am probably one of the few people after MKG who seem to have been thrown out of the great Indian Railways and left to the terrain of NHAI (National Highways Authority of India) and their likes. Joke over.

We wanted to go to Khajuraho and there is (well there was) no train connection beyond Jhansi and that was our motivation (read excuse) to drive all the way from NCR (Ghaziabad, UP). I would break the road-review in two sections since lot of people prefer to train to Jhansi and then drive further to Khajuraho with mostly preferring a night halt at Orccha, that Bundelkhandi old world town which hardly moves.

Getting out of Delhi depends on your starting point. Ask for Ashram Chowk on Ring Road and then take Mathura Road from there. Depending upong the time of the day, the traffic from Ashram to Badarpur could be worse to frustrating. As you get past Badarpur, sanity returns.

As has been covered multiple times at Ghumakkar, you get past Palwal, a little traffic before Kosi Kalan, in no time you are at Mathura and before you realize it, you are done with this section . The trick to do this section quickly is to start very early so that you can skip past Palwal before it wakes up and avoid the truck-trade-tax bottleneck at Kosi. We did this trip while the Sun was not out and it was a little foggy but you could cruise at high speed since the quality of the road is excellent. You need to watch out for petty traffic as you pass through some of the small towns, villages but overall a very peaceful drive. After Mathura, you need to turn right. Though there is a right sign for Gwalior, this sign is not very conspicuous so pay extra attention past Mathura.

Mathura Refinery in the background. McD on NH2 @ Mathura

If you want to break for a quick grab then ‘McDonalds’ makes a good choice since there is a play area for kids, there is a fuel pump, a couple of petty shops is what I remember and overall a lively and active place any time of day.

It was still pretty early so we could see the early morning action with people getting ready to start their day. We passed through a village, some sub-urb of Agra and left it after about 10 minutes of drive. This bypass connects the legendary Delhi-Kolkata (NH2) with another legendary Agra-Mumbai (NH3) and I was hoping that as I leave the village/kasba, I would be taken to a freshly baked tar which would connect me to NH3. But law of averages caught up and we found ourselves on a stretch which looked straight out of a old classic movie. Essentially a broken road, actually broken is a very polite and mild description, but anyway, so a broken road with fields on both sides, an occasional tea-shop or a small village to give company and zero traffic. We were sure that we are onto something which is not ours so we asked few times and were very dilligently told the same thing. So we continued. 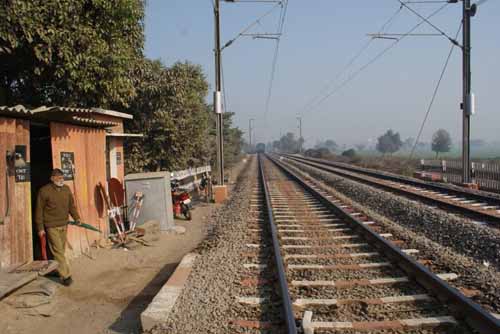 As our seasoned traveler (read driver) brain relaxed after the initial shock, we could appreciate the natural virgin barren beauty around, with villagers having a game of cricket, two railway crossings with manual barriers, tempos having 10 passengers and a heavy dark green Mahindra Scorpio cutting its way through, trying to avoid moon-craters without falling in the ditch which ran alongside both ways.

After a while we noticed that someone is making a parallel road and probably things would improve but this part of ride did wake everyone.

As we hopped to NH3, we could not believe that we can now drive like most of the urban-weekend-travelers (who wants to be a roadie for more than 2 hours, anyway). We proceeded, a flyover was being done so it took a while to cross that but now we were back on a very good highway. 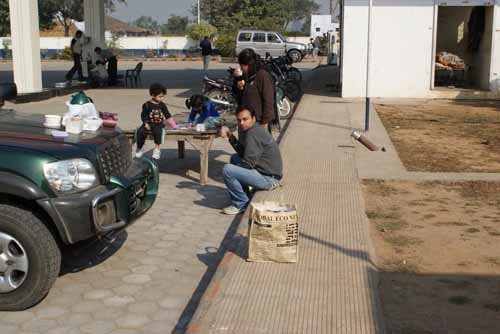 Time to take a break and be done with the breakfast. As with our most of the long distance trips, we carry our breakfast with us. Freshly made Idlis, Bread with Jam, Tea and munchies. We try to find a big and clean petrol pump so as to give some running room to Kids and to find a clean loo. Park the vehicle in a corner and spend 30 odd minutes in the Sun. We were lucky to find a good place and the owner extended the warmth by giving us a khaat (wooden bed) for kids to stretch and be very more at home. A few short conversations with fellow pump guys, the occasional taxi drivers (I always ask them the mileage they get from their vehicles, I dont know why), try to peep through the Amar Ujalas or Rajasthan Patrikas and be done with.

We were now in our 2nd leg of journey and as we cruised through Dholpur, we realized that we are now in a different landscape. Dholpur has been a kingdom of yore and has a long drawn history. The town was as dusty and non-descriept but for certain structures which did made one remember the royal connection. We were now in Rajasthan and it was not long when we found ourselves out of Dholpur and close to the Phoolan Devi range. 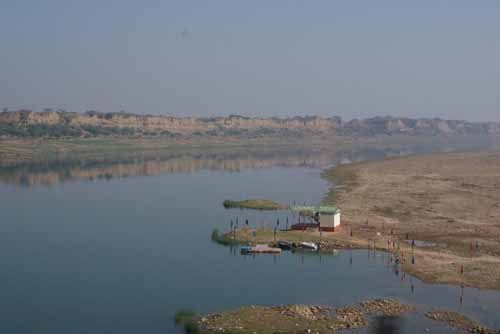 Though I have heard about Morena and Bhind, but it was the first time when I could find myself over Chambal. The valley which once was famous for all the wrong reasons now lies in oblivion in terms of being talked about. The terror bed now proudly hosts tourist rafting camps. As we drove over the Chambal river, we could not miss the ravines jutting out from all over. 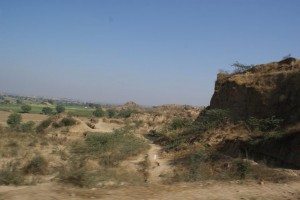 By now the Sun was in its full glory and the terrain was getting interesting and I never miss those long boring high-speed highways, so time to enjoy the little-bit-rocky up-n-down roads and vast and unending ravine views.

We quickly went past Morena and Bhind and entered Gwalior. We were now in Madhya Pradesh. Since we had to go to Jhansi, time to leave NH3, get into the city and look for NH 75.

Gwalior was clean and not very rushy during our first encounter but probably we were not in the thick of things because on our return journey, we ventured into the main city to take a quick look at Man Mandir Palace and had a real taste of Gwalior. With the help of Nokia Navigator and confirming the results at every turn, we found ourselves out of Gwalior and on NH 75, towards Jhansi.

So far we were on two very important highways leaving the bypass and the city part. Initially it was NH2 (the famed Delhi-Kolkata GQ) till Agra and then it was Agra-Mumbai (NH3). Now we were on NH 75 which doesn’t compete with its elder cousins and hence on NH 75, there is no need to be quick. Infact you can’t be quick since most of it is single and tar quality can be best summed as mixed. But this section was the one which had some distinct character. As you look either way, the uninterrupted view of Mustard fields treat your eyes, as you pass through the villages you start to get a feel of ravines’ laden landscape with dry jungles, long no-traffic stretches, no tolls and virtually amid the real big Indian plains.

Datia Mahal on the way to Jhansi

The high point is Datia, the fort which will follow you for a while. We had a long drive to do so we didn’t stop anywhere but I would recommend that if you could, try making a short haul. Celine, has written a very brilliant post on Datia at her blog. She suggested to stop there but I had to keep moving because I wanted to cover as much ground as possible during the day. Now we were in 2nd half of day and in terms of overall speed we were doing good but it was getting a little tiring. Sometimes its hard to believe that you were at Delhi not too long ago.

We entered Jhansi and one could not miss the numerous arms shops each selling rifles and what not. The town didn’t impress much, it was as dirty and traffic-y as any other small town. A hard search and we found a restaurant to take a grub before we finally head towards Khajuraho.

So from the history laden Delhi-Agra to old Dholpur, calm Chambal, Royal Gwalior and Bundelkhandi Datia, we were finally at Jhansi. Since you read this much, let me know in which state Jhansi falls.

Few instances can match the excitement of seeing the famed Komodo Dragons right in front of your eyes. The giant lizards with their snake-like…