It was past 3 PM when we were done with our lunch at Jhansi and we gathered ourselves for the last and final leg of our journey towards Khajuraho. Hindi is the primary language of this region and we had no difficulty in getting directions and in a while we were back on NH75 which would remain with us till Bamitha, where we would turn left. Khajuraho is 8 odd KMs from there.

As we got out of city madness, we were surprised to find that the tar quality was excellent, something not very common in Madhya Pradesh. There is a lot of international tourist which travels between Orchha and Khajuraho and there is no train connection between the two cities. Well, to be more accurate there was no train till that day when I was driving (25th December, 2008). We were pleasantly surprised to find Mr. Laloo Prasad Yadav, our Railways Minister, at Khaujraho the other day, he was there to inaugurate the new rail connection between Jhansi and Khajuraho. So coming back to road, we enjoyed the good tar.

After a while there is a exit on your right towards Orchha. We skipped that and kept going straight.

Chale Chalo - With noone around

It was already around 4 PM when we were at Orchha Exit and I was hoping that we are able to cover as much distance as possible before it gets dark and was thankful to road quality. But as they say it, road suddenly started to deteriorate and our speed greatly reduced. With two small kids, I drive all the more slow and the cabin atmosphere starts to get a little edgy in the last legs of these long drives. But thanks to some splendid company, we kept going on. It was the same set of folks who did Delhi-Jaisalmer during last Christmas and amid the lead track of ‘Oye Lucky Lukcy Oye’, we kept going over pot-holes. If you can follow a bit Punjabi, it was like ‘Gaddi jaandi hai chhalanga maardi’….

By the time, we crossed Mauranipur, it was getting dark and I could see Nowgong only on my return trip, when it was pretty sunny. Both of these are pretty small towns and we didn’t notice anything of much significance except the lovely countryside. 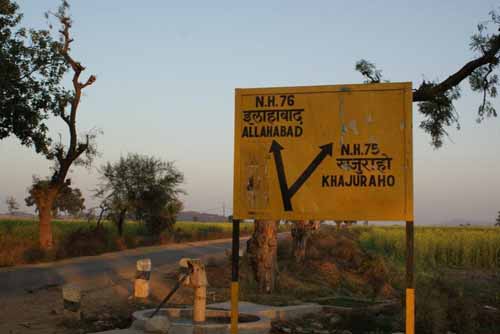 Remember to take a right here.

As you get out of Mauranipur, you need to take a right turn to remain on NH75. There is a old world yellow board but be extra careful since even though its a NH, its not more than a 20 feet wide single road.

Chhatarpur was the only big ticket item on the way and it was more so because of ‘Chhatarpur Palace’ being converted into a hotel and OT (Outlook Traveller) covered it in detail. It was pitch dark when we were out of busy Chhatarpur market. It seemed to me that Chhatarpur must be the biggest trading town in that area before Satna. 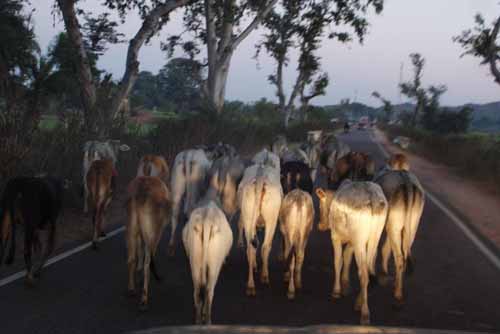 We reached Bamitha around 6 ish and took the last left turn. The only thing which was glowing was later identified as the new railway station. Few more ask-at-each-turn and we could see the big R of our hotel.

I looked at my watch and I looked around. As my fellow riders were getting off, I could quietly feel the pulse of this long drive thumping within me and could wink to myself, welcome to Khajuraho. Well done.