Welcome to the Haunted Fort of Bhangarh.

This fort, located in Alwar district of Rajasthan, offers a fulsome package of ghostly tourism – complete with an abandoned township accursed to eternal devastation by a wicked tantrik; an affair of a princess gone wrong; a dutiful Govt notification advising general public not to enter its premises after sunset, a set of gloomy ruins in bricks and mortar awaiting mystified onlookers (that is, only during ‘Godly’ hours – sunrise to sunset; beyond which it is ‘paranormally’ risky). 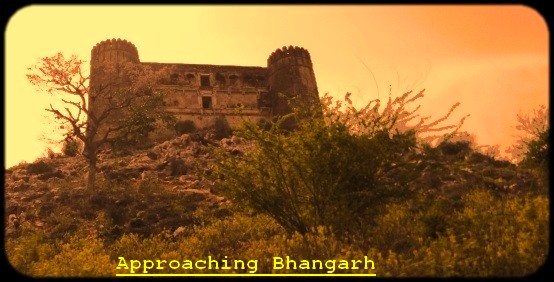 The fort was built during later half of 16th century by Raja Bhagwant Das, ruler of Amber. Later, this was a capital for Madho Singh (brother of Raja Man Singh, a General of Akbar, of Jaipur Amber Fort fame). The elaborate fort complex, in its hay days, had drawn so much of praise that the Pink City of Jaipur is supposed to have been modelled after it. It was a thriving township in initial years. That part of history is almost certain. Thereafter legends take over, which go something like this – the flourishing township turned into a ghost town almost overnight; unknown forces and mysterious circumstances saw the occupants fleeing the town hysterically. Anyone who tried to stay on was doomed to perish. 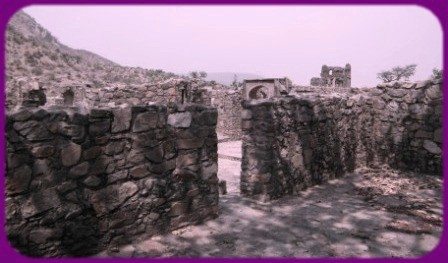 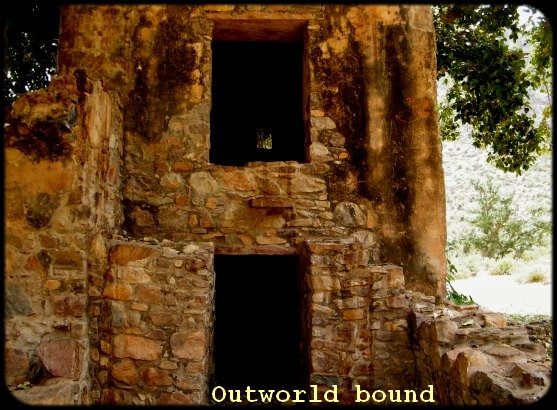 The curse supposedly endures till this date; human being are not known to have survived a night within these precincts – the nightly hours here belong to the dark forces; when the area reportedly reverberates with impious sounds, wickedly apparitions (punctuated by chhum-chhum of ghungroo) and so on ! The local residents (nearest habitation today is a few kms away from the fort precincts) do not dare going near the walled premise during nights even today. 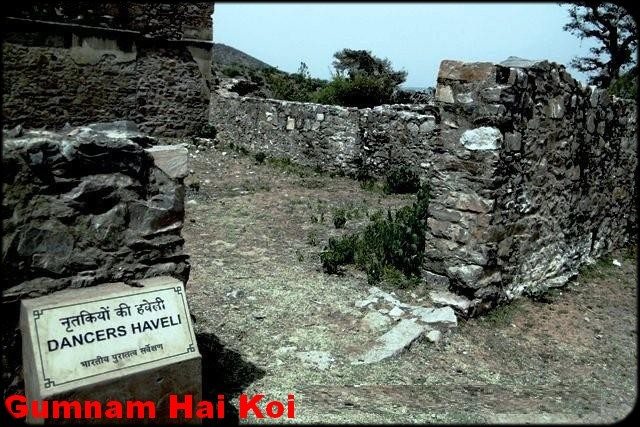 That is how the ruins of Bhangarh stand now – well laid pathways mutely guarding the ravaged buildings, the markets and the crumbling palace. It looks as if an artist has left his masterpiece unfinished – nay the masterpiece has rather been gnawed away by some spiteful power; the dying remnants still seeking recourse to immortality, perhaps in vain. 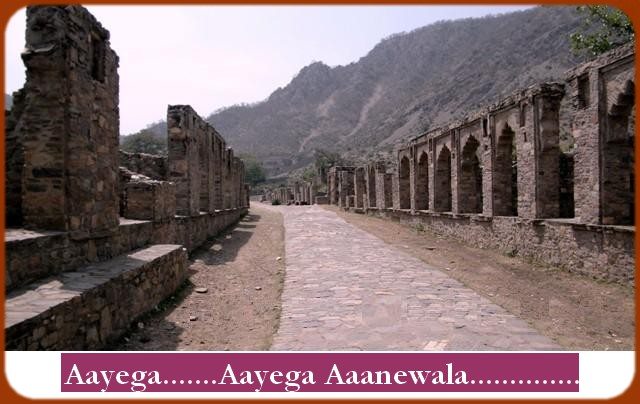 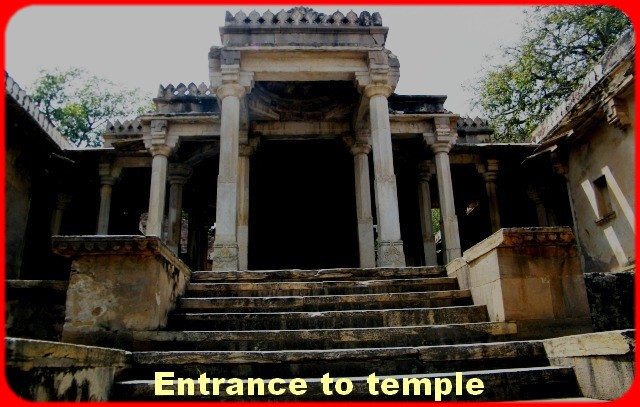 Stories about reason for this catastrophe vary; two versions that I came across (from among endless, unverified ones on the net) are like this –

I. The ruler of the fort was forbidden to create any structure whose shadow reached the hut of Baba Balaknath (a revered sadhu/saint) residing nearby. A haughty ruler forgot this condition and raised the height of palace such that its shadow desecrated the saint’s hut; thus his curse came into effect and doomsday mantra hit the township irrecoverably.

II. Unyielding charms of a beautiful princess/ queen (named Rani Ratnavati/ Roopmati, in different versions) led to a besotted tantrik trying to gain control over her. His attempt was thwarted by the alert Rani leading to tantrik’s death – and the dying tantrik pronounced a curse of eternal doom on the town.

The remnants of this fort reminds me of an old ‘Adhunik’ bong song by Hemantada named ‘Gayer bodhu’ (village bride), excerpts from which are-

(…..ghosts and spirits and vicious snakes and witches, devilish forces came hurtling down…..)

This song narrates the story about a country bride whose village is cursed and subsequently ravaged by sinful spirits.

While listening to this song as small children (those days of yore when wings of imagination were unfettered by ready-to-serve-in-your-bedroom graphic-explicit-gory online games and tv shows), we would imagine spooky, annihilating figures flitting past the village destroying all that was human. The petrifying feeling we had while listening to this melodious creation is perhaps close to what one would feel in Bhangarh fort – a place in throes of death but not yet dead, a world suspended between hither and thither. 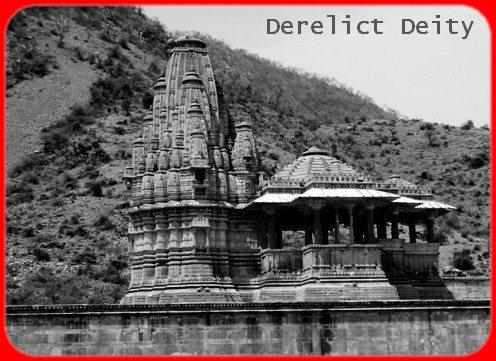 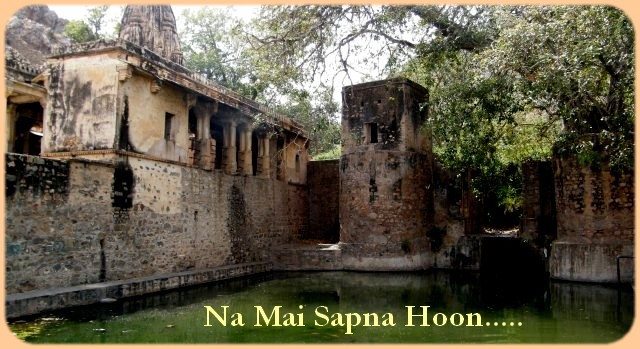 We got to know about Bhangarh through a Ghumakkar post by Amit (April 2011, ‘Bhangarh, India’s Most Haunted Place’ – thanks Amit for that!). This, followed by an internet search (Bhangarh with all its mysteries deluges the net, waiting to be clicked on) made us ravenously drawing up plans for this trip.

SWOT analysis of Bhangarh brought out that :-

I. It offers a peek into mystery – the haunted, eerie world which we come across only in movies and for more arduous ones, the printed world.

II. From Delhi, the place is doable in a day (a bit stretched) and two days (comfortable) – thus a Saturday/Sunday weekend allows for a good visit precluding the need for extra leave-days from office.

So, on a Saturday morning of late April 2011, we cranked our car on the road to Bhangarh.

Bhangarh is not so well charted either on a Rajasthan map or on the net. So I try to depict the route in earnest, as follows:-

On this Tiraha, take a left turn, (straight road is NH8 going to Jaipur) and route as follows –

Delhi Bhangarh distance is about 270 kms.

Road till Tiraha is upmarket, / NH8 quality. Thereafter, road up to Thanagazi is reasonably OK state highway, passing through rural Rajasthan. After Thanagazi and Guda, the road becomes quite depressing (narrow, patchy and feebly metalled). Good point though is that a large stretch of this road is being reconstructed, so perhaps future visitors are in for a better drive.

Another route to Bhangarh is via Alwar, which we took on our return journey. Details of that route will be available in Part II. 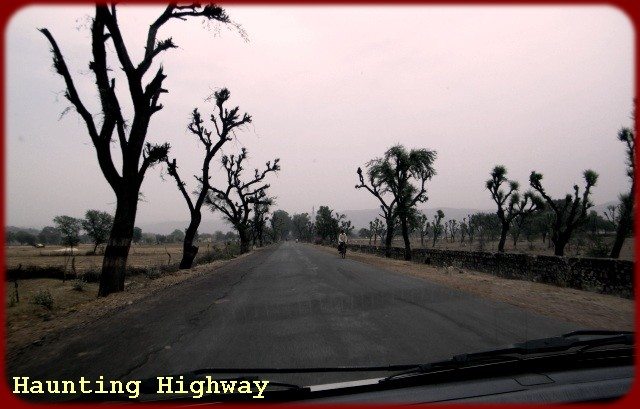 Having started at 8.00 am from Delhi, we found ourselves at Bhangarh Fort parking by 1.00 pm (this includes negotiating obnoxious traffic across the Gurgaon toll gates).

One would perhaps need approx 2 hours for a leisurely walk-around within the compound. Car parking is available some 200 mtrs before the entrance gate.

After the visit, we proceeded to Alwar, located at a distance of about 90 kms for overnight stay, local sightseeing and departure the next day

That brings me to end of this part. In part II, I intend to dwell upon some features of its ‘mysteriousness’, as we perceived them during the visit, and the return trip.

Mystery of the Haunted Fort was last modified: August 3rd, 2020 by AUROJIT

This must be a great inspiration for fellow ghumakkars : My friend is driving an autorickshaw for charity across india starting from cochin ending…