This one has taken a bit long to come out. We did this ride in December 2010, but I didn’t get time to work on the log in the next few months (blame it on a hectic job). Six months passed by and in June 2011, we embarked on another ride. And circumstances took an unexpected turn to allow me some leisure to work on the travelogue. But before I focused on the new ride, I thought of giving the Gwaldam ride its due exposure. So, here’s a descriptive photo log on our journey to this breathtakingly beautiful destination in Uttarakhand. 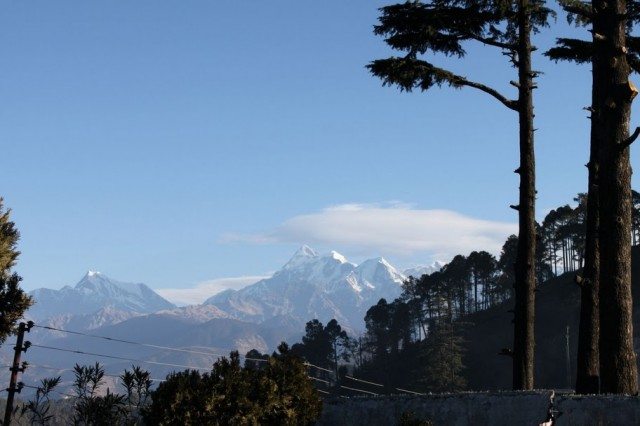 Paahji (Vishal Chopra) and I were joined on this ride by Sonu (Deepak Rawat), Paahji’s brother-in-law. He rides a black Electra 4S and has a ride to Leh to his credit.

As is our custom now, we started off on the eve of the first day to give ourselves that extra bit of time especially as it was winter. The ride up to Moradabad was uneventful and brisk. We halted for the night in a hotel opposite to the railway station and spent the evening in high spirits. No photos.

Started off nice and early and took the Bazpur-Tanda route to Nainital. We had traveled on this route earlier so didn’t feel the need of taking current feedback and duly paid the price for it. We were very lucky to make our way through that wonderfully horrible road and a worse truck jam. Wish we could photograph the most horrible stretches but could only manage to click a few after crossing the worst part. 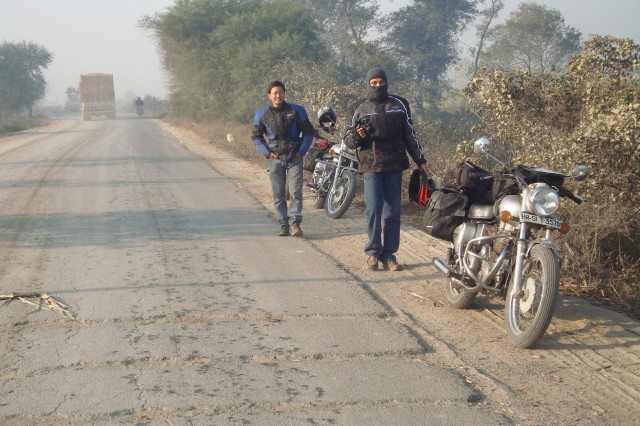 After the horrible stretch at Bazpur

That stretch ate up a lot of time so we focused on reaching Nainital without fooling around further.

Nainital looked awesome in prime winter. It was bright, windy, and cold. Just a few photos and we left for Almora. Fueled up at Bhowali and it was already 12 PM. Right after Khairna, we again hit a bad patch of road. At many places, the road was badly impacted by monsoon rains. Development work was on but it was going to take time. We stopped close to Almora and had some packed food for lunch. The snowy Himalayan peaks were visible from that point.

First view of the snowy peaks

The bad road delayed us further and by the time we hit Almora, it was 3 PM. We wasted no time and headed for Kausani. The road from that point was pretty good; still it took 3 hours to cover the 50 kms. The sun had set by that time and we were still 45 kms adrift of Gwaldam. Paahji called up the tourist bungalow in Gwaldam to check availability of rooms. Those guys advised us against Gwaldam considering the cold and the darkness. But stopping short of the day’s target was not easy to accept. We unanimously decided to proceed to Gwaldam. It was a calculated risk that paid off. The road was reasonably good and we rode closely like a train to ensure safety. It got colder and colder as we gained altitude. We hit Gwaldam in 2 hours. Lights were out in that quiet little place but we managed to locate the GMVN tourist bungalow. The guys at the bungalow were amused to see 3 crazy bikers from Delhi reaching such a remote hill station in sub-zero temperature. We had a delicious mutton curry from the only dhaba available nearby, drank rum to our limits, and enjoyed the bone shaking cold.

Woke up to a bright morning in Gwaldam. It was still freezing cold. The guys at the dhaba below were enjoying a fire. Paahji joined in. Gwaldam’s proximity to the great Himalayan peaks is astonishing. We went on to photograph the mesmerizing snow clad peaks in bright sunshine.

Paahji by the fire side 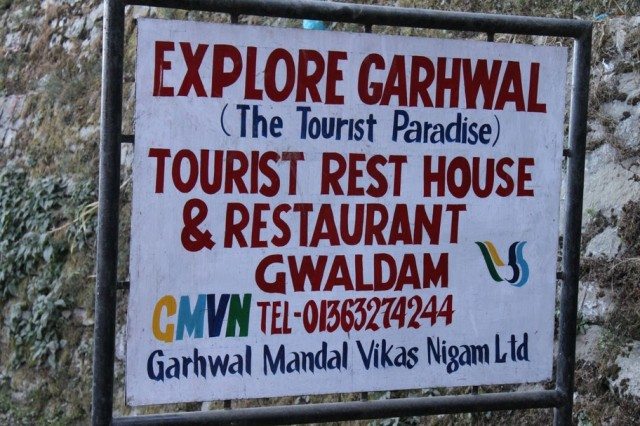 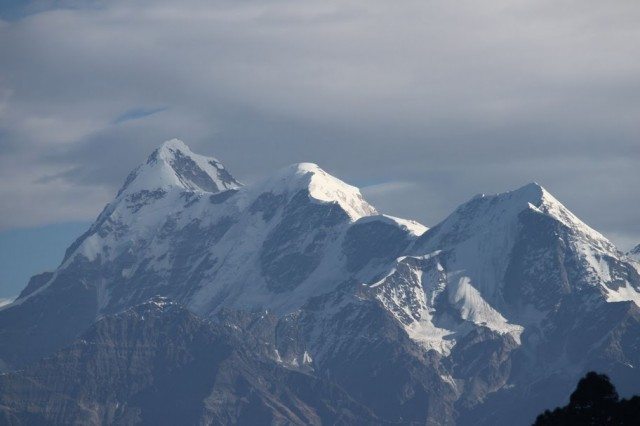 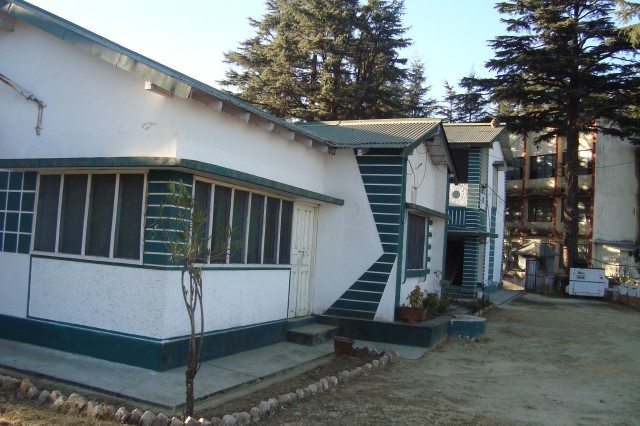 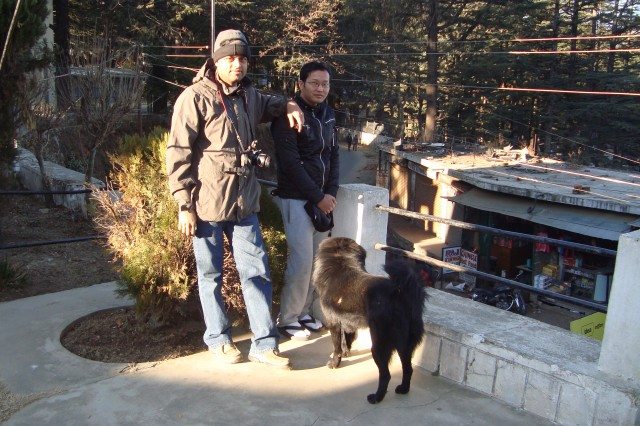 Using the sun to warm up

The plan for the day was flexible. We could chose from a few options like going back to Ranikhet and from there to Binsar; or we could go back to Nainital. Considering the cold weather, we decided to halt for the night at a place reasonably close to the plains. I suggested Bhimtal, as Paahji or Sonu hadn’t been there before. We left Gwaldam at around 10 AM and headed for Baijnath dham. 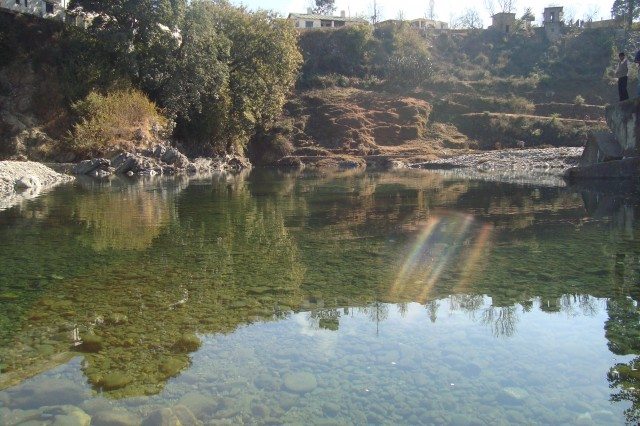 The adjoining pool made by blocking the river – full of fish 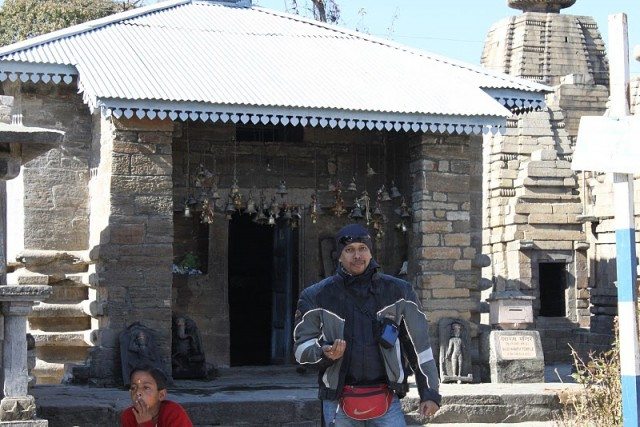 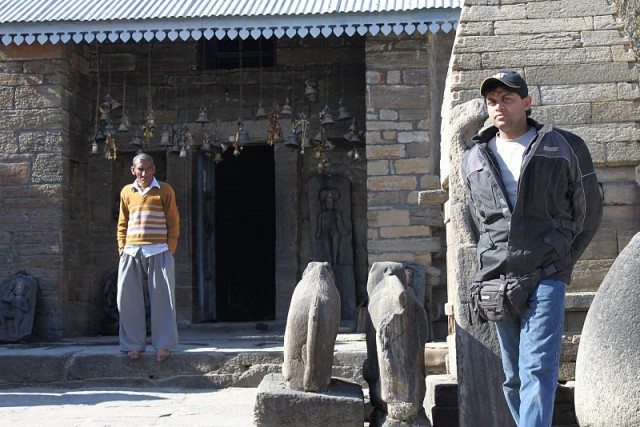 We encountered a phenomenon called Bhimshila at Baijnath. It’s an unassuming round rock likely to weigh not more than 60-70 kgs. The myth is that the second Pandava, Bhim, put his foot on this rock and from that contact, the rock acquired spiritual attributes. This rock cannot be disjointed from the ground by applying any amount of human or mechanical force. It can only be rolled from one place to another. The temple high priest told us that the Bhimshila can be lifted off the ground only by using nine single fingers and chanting the number ‘9’ in unison. 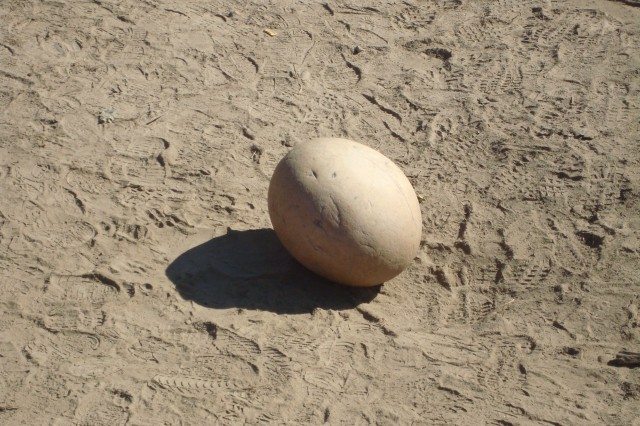 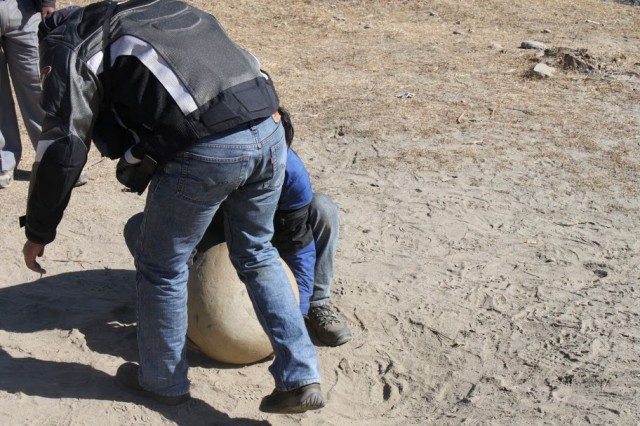 Our natural reaction was of disbelief and Sonu decided to have a go at lifting it. Seeing Sonu struggle, I joined in. We may not be the weightlifter type, but together Sonu and I are well capable of lifting more than 100 kgs. The rock couldn’t be lifted. It felt like it was bolted to the ground but strangely, it could be rolled easily from one place to another. The high priest smiled at our embarrassed looks and called Paahji and one more guy to join hands. Together we put nine fingers under the rock and chanted ‘9-9-9-……’ and stood up slowly. The rock came up with us up to waste height. We were speechless as our logical thinking failed to justify what had just happened. Apparently, the Discovery channel also tried to unravel the mystery surrounding the Bhimshila, but was left equally flabbergasted. 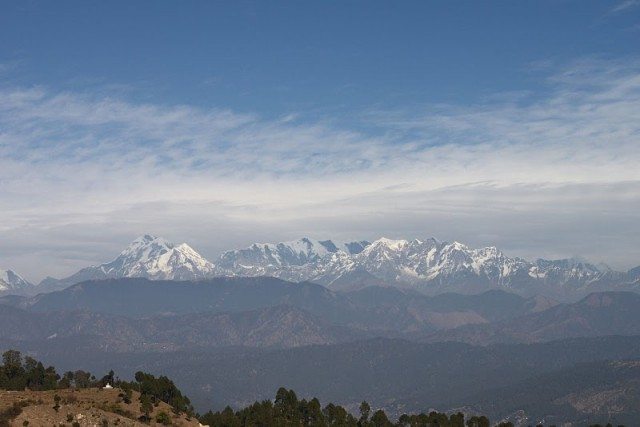 Some more of the peaks – Can’t have enough of them 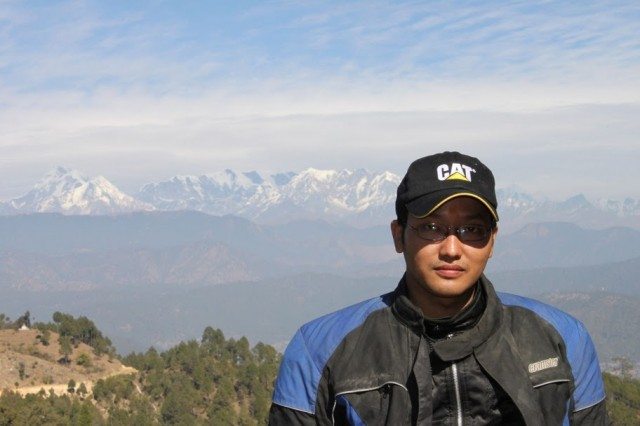 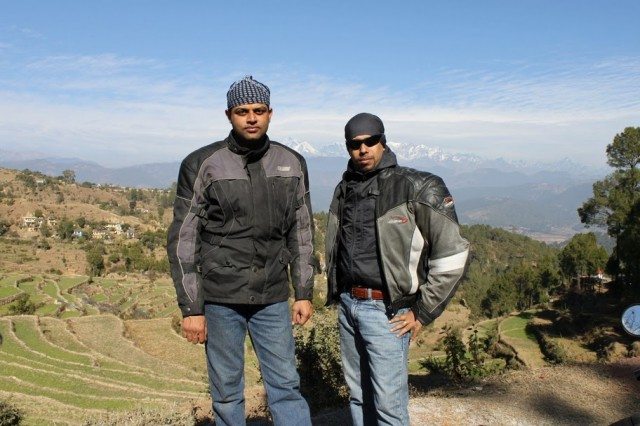 And the big boys

After having a great time around the picturesque settings of Baijnath and clicking lots of lovely photographs, we made a move for Ranikhet. The road continued to be wonderful.

At the Golf course, Ranikhet: 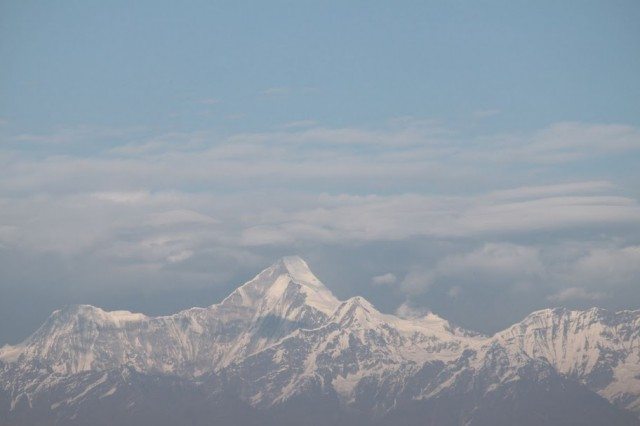 Lovely view of the golf course

It was a beautiful day 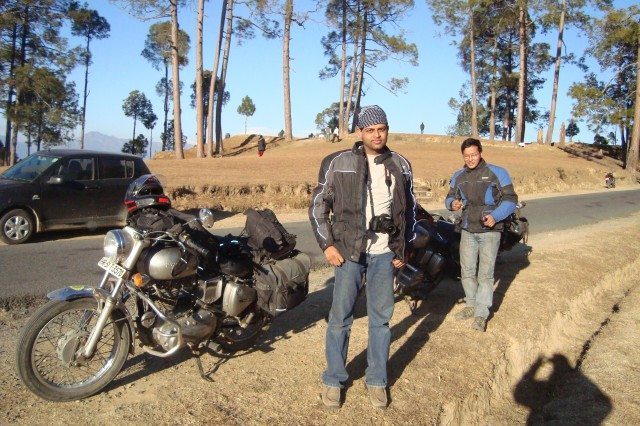 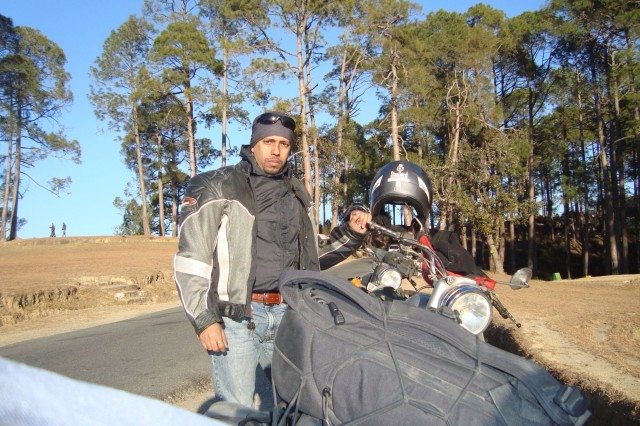 We lunched at Ranikhet in a decent vegetarian dhaba. Bhimtal was about 50 kms from there. We took the wonderfully laid out Ranikhet-Khairna road towards Bhowali. For want of time, we didn’t stop to photograph that road. We just enjoyed a silken smooth ride for about 30 odd kms. By the time we reached Bhimtal, it was pitch dark. The huge lake looked intimidating even in the dark but the place looked as deserted as a graveyard. Paahji didn’t look too happy; he probably was expecting something similar to Nainital. We secured a nice room in a hotel to spend the night. 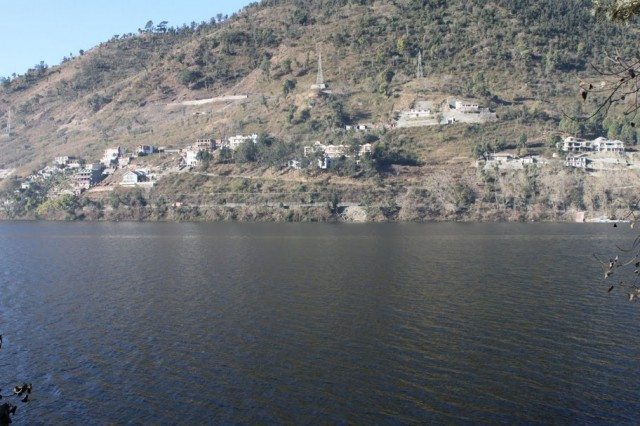 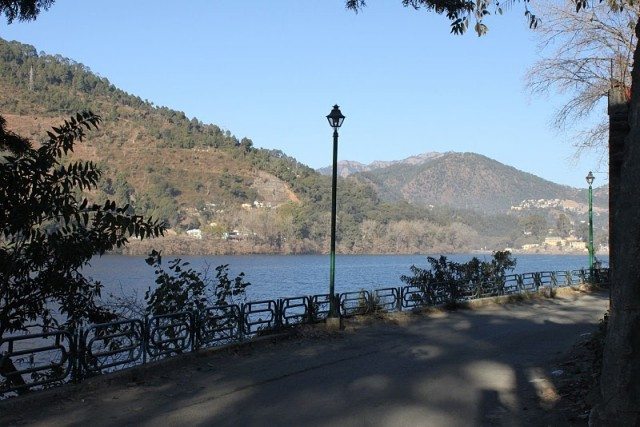 Not much greenery around

Bhimtal wasn’t happening at that time of the year. After a couple of quick photographs, we made an early start for Delhi. The Haldwani-Moradabad road is currently in excellent shape. We made good time till Moradabad and then the Moradabad by-pass made riding even better. Made it back to Delhi comfortably by 5 PM.

Devbhumi Uttarakhand really lives up to its name. Wherever you go it’s absolutely magical. The Tals along with Ranikhet and Kausani are revered destinations in Uttarakhand. But the slightly lesser known centers are more pristine and soothing. Places like Gwaldam or Baijnath will not disappoint the common tourist who is brave enough to go slightly off the beaten track.

Thanks for reading through. Till next time, it’s
Anandarup Nandi signing off.

The legend behind the distance is the annoyance of Durwasaa Rishi, who cursed Rukmini that she would remained separated from her husband as she had not offered the Rishi the water which she took while pulling the Chariot of the Rishi, and hence this temple is said to be located at a distance of 2 kms from Dwarkadheesh’s temple.