Bijli Mahadev, just the name is enough to inspire you to take this journey to one of the holiest shrine of Lord Shiva as it happened with me. I heard about this place from one of my friend (Praveen) who stays in Kullu and as always approached my e-friend (Google) to gather more information about this place, prepared a program and finalized the dates.

I would call this law of attraction that just few days before the trip, I was browsing through the photos of the wedding of one of my friend (Bali) who works in Mandi. I thought it would be good if I could visit him and if he could come along since this was on a weekend. While I was thinking about this, I got a call from one of my friend (Rajesh) who had also attended Bali’s wedding with me at his place (Sujanpur Tira) and I was pleasantly surprised to know the reason for his call.

He actually phoned me to discuss a short outing and a small re-union with old friends as he was going to get married soon (now happily married) and wanted to enjoy his last few days of bachelorhood with his friends. When I told him that I have already planned a short trip to Himachal and to see Bali, he readily agreed to come along. His perfect timing worked well so far.

So following our original plan to cover Bijli Mahadev, Rewalsar Lake, Shikari Devi, Kamru Nag Lake, Karsog, Tattapani, we reached Kullu on the morning of 30 July’11. Since there were regular buses plying on this route, it allowed us some time to freshen up and to have a quick breakfast. Later we took a mini bus till a village nearby the shrine from where it is just 2.8 km soft trek passing through some of the villages amongst the beautiful deodar forest and offering excellent views of the valley and river Beas. 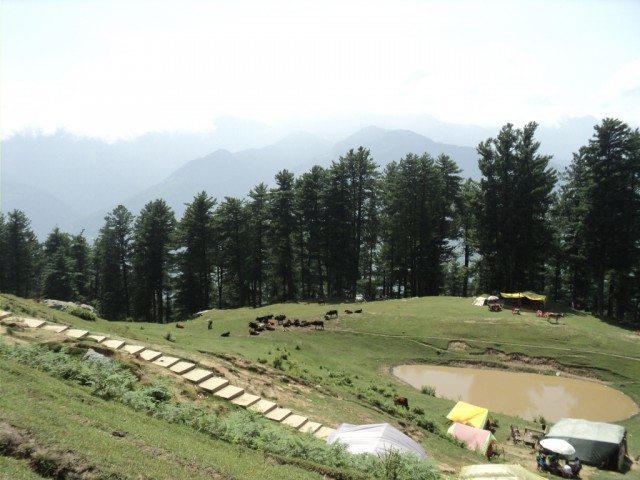 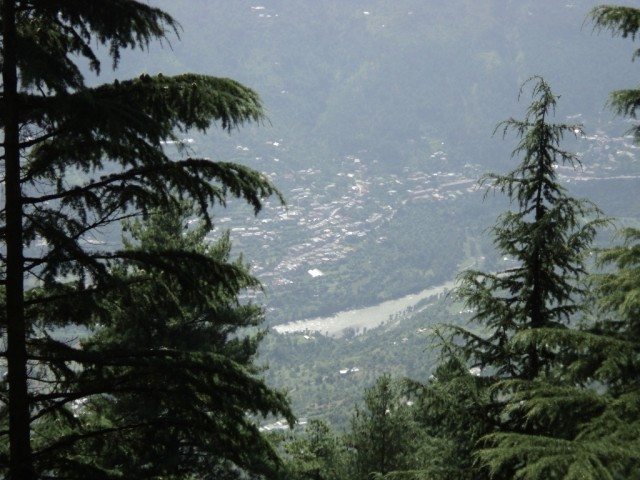 Though it was not a tough climb, but it really turned out to be so as I saw Rajesh panting just after climbing merely 10 – 15 steps. By now, I could understand that it will really be difficult to get on the top. But to my surprise, after walking a few more steps Rajesh uprightly refused to walk any further due to fatigue and breathing problem and asked me to go alone. Since this was our first pilgrimage on this trip, I really wanted him to go up with me and admire the nature’s beauty from the shrine. By Lord’s grace, I could manage to keep him motivated to move ahead and kept encouraging him all the way till the main shrine. 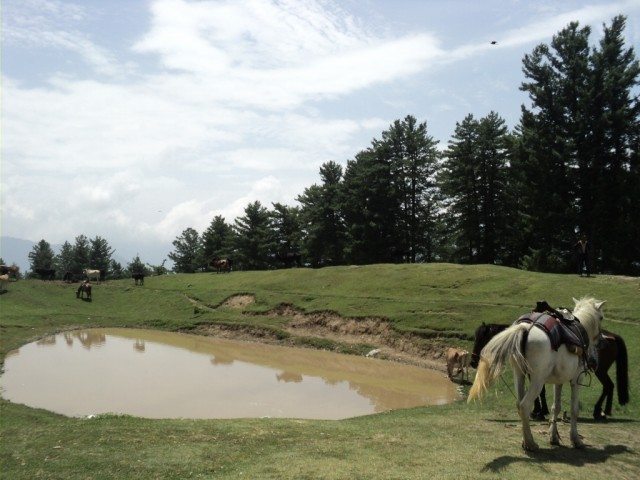 Delighted to find this open area near the temple with some camps (for mealsovernight stay). Some muddy ponds, grazing horses, blue sky with plane like cloud, flying bird, trees 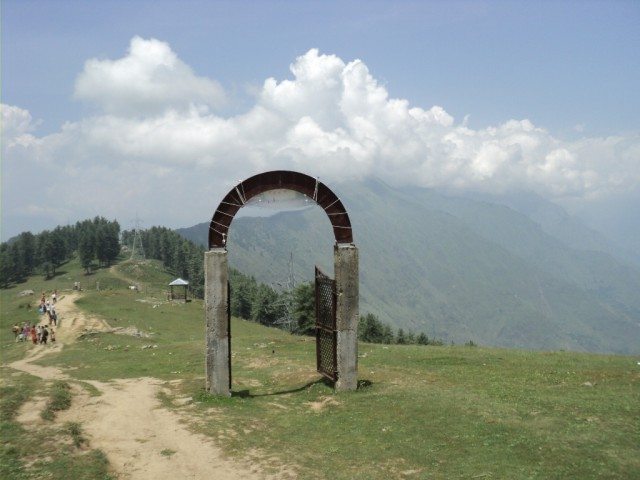 Gateway to the temple 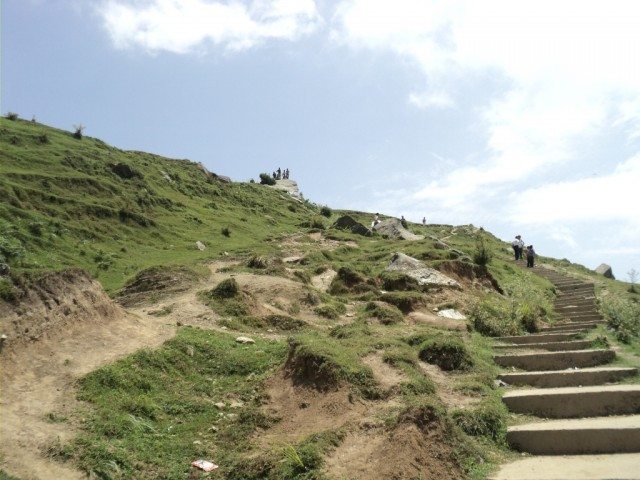 Swargarohini, path leading to the heavenly abode of Lord Shiva

An open area was an indication that we were nearing the temple and I could anticipate a victorious smile on the face of Rajesh. It was as if he had conquered a fort (it was no less than that for him), he was such a delighted soul, completely recharged and happy to breathe under the open sky with enchanting views of the valley. 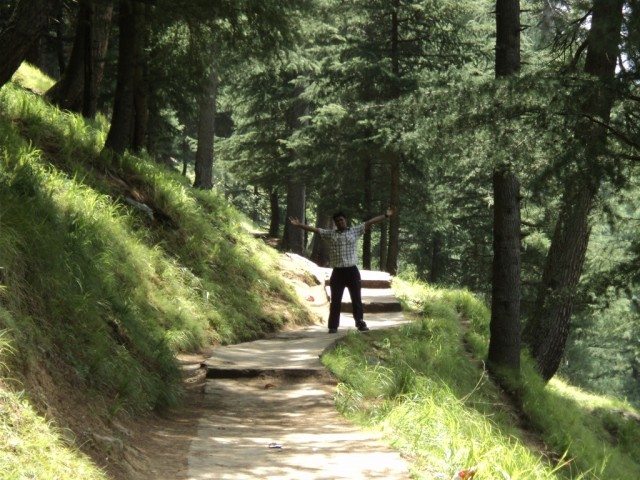 The temple is one of the most sacred in the entire valley and is frequented by the locals as well as other travelers from other parts of the country. As per a popular belief, every year the lightening (Bijli) strikes the shaft near the temple and breaks the lingam into pieces (which symbolises that Lord Shiva absorbs all the sufferings/dangers falling onto the world upon him). 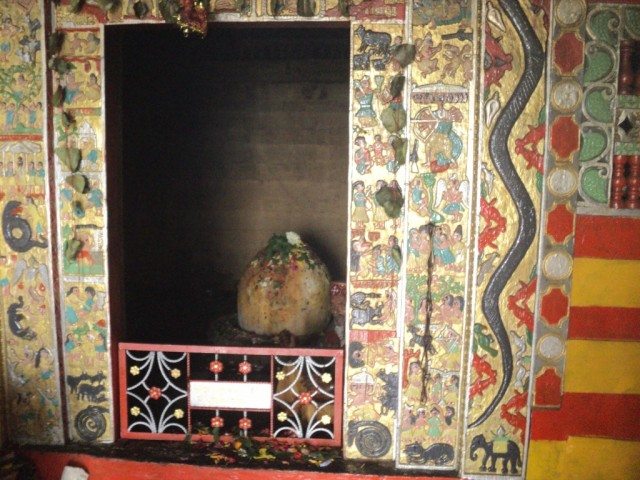 The lingam is later supposedly restored by the temple priest using butter. After paying visit at the holy shrine, we started exploring the surroundings of the temple. The initial gateway to the temple (around 100 meter before the temple) gives a feeling as if one is entering into a heavenly abode.

Just outside the temple are a bunch of idols of the divine bull Nandi, the mount of Lord Shiva with a long pole in between where the lightening supposedly strikes. Sitting on the surrounding slopes and enjoying the mesmerizing views of the valley is an experience one can never forget, a perfect setting for spending peaceful time with nature. The place just below the temple is a perfect spot for picnickers and family gatherings with a few shops offering eatables. 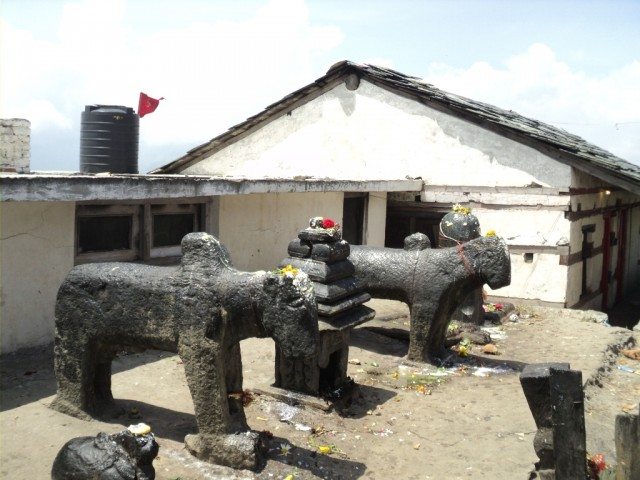 Nandi, the divine bull (mount of Lord Shiva) guarding and facing the temple 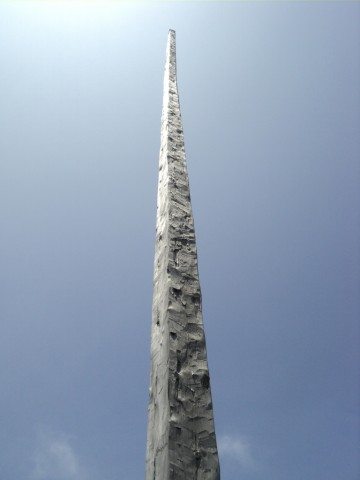 Tall pole facing the temple (the lightening strikes this pole) 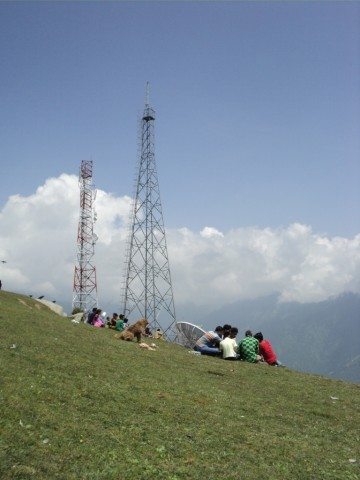 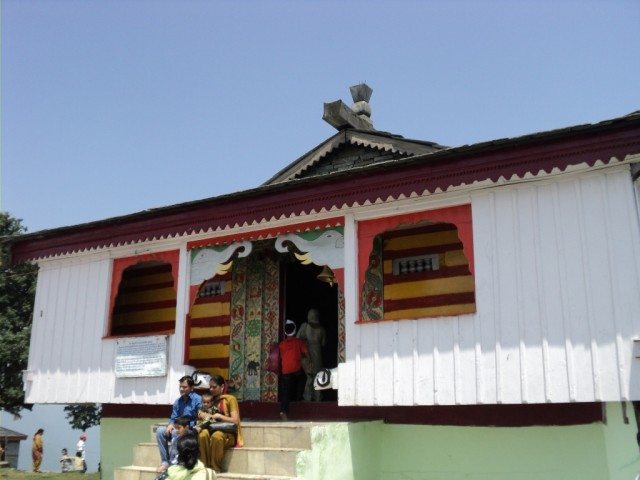 A family at the shrine

Well, after visiting the holy shrine and enjoying the nature’s bounty, it was now time to bid adieu to this heavenly place. The mouth-watering apple orchards on the way whet our appetite, so we had Chole with butter bread in Kullu and moved on to Mandi for overnight stay at Bali’s place.

Apart from the shrine, there were two more interesting things that caught our attention on our way to Kullu. First was Pandoh Dam (19 km from Mandi) which gives you two different flavours at the same time, one very wild and fascinating (if you are lucky enough to witness water flowing out of the dam, especially during monsoons) and other very calm, quiet and serene (on the other side of the dam). 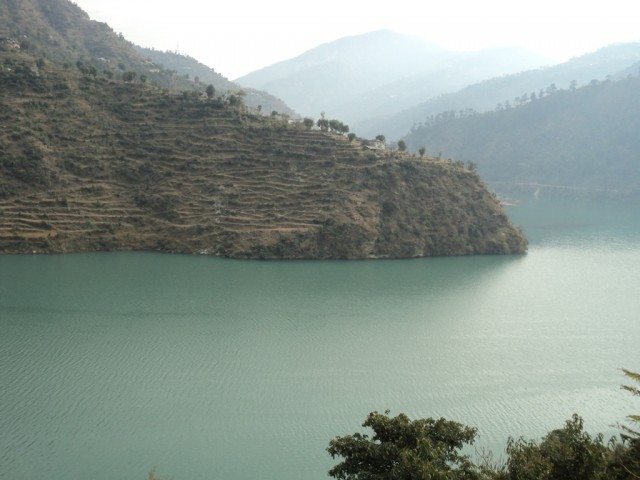 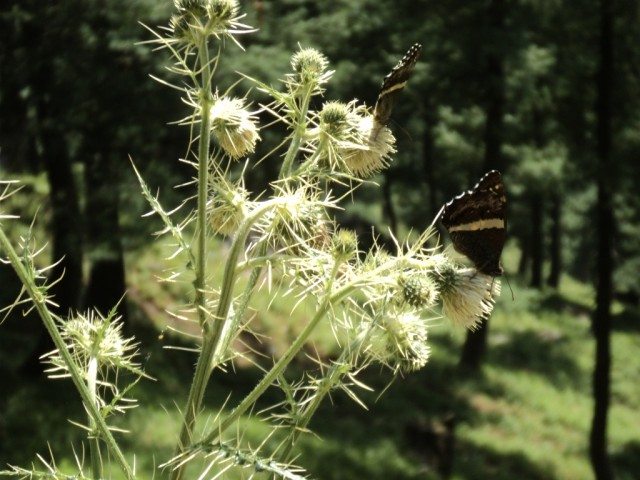 Wild beauties on the way back

The second was 2.8 km long tunnel at Aut as this was the first time I had entered into such a long tunnel, the experience was really amazing. We reached Mandi late evening, had our dinner, discussed the next day’s program and went to sleep. Before sleeping, I had however some doubts about rest of the trip after our experience this morning since some of the places in this trip required a lot of trekking, but we were all positive about it and were looking forward to some more adventure that had just begun!!!

Love jungles, mountains, lakes, rivers, flowers, animals (including social animals). In one word, i'm a 'junglee' and my name approves of this. Wandering in the hills energises and refreshes me, gives me an opportunity to discover and understand myself......