On a cold Friday evening Vishal called me at around 7 PM and told me that he did not want to spend the weekend in Delhi in the same old fashion way and wanted to do something that would rejuvenate us so that we reach fresh to the office on Monday morning. He told me that he had already left from home on his bike with some essentials and his buddy “his camera”. He asked me if I had any ideas what we could do or where we could go as he had not decided before leaving home (nothing new about Vishal).
I asked him to come to my house and pick me up and then we could decide on the way what best we could do. Vishal and I had dinner around 8:30 PM at my place and we decided to hit the road immediately. Like always; my mom and my wife showed resistance but they knew that it was all in vain as it was nothing new for me to leave on a journey on such a short notice. Vishal and I left my home at around 9 PM and we had still not decided where we were going.

Even though we had done it many times together, still we finally both agreed that we will go to Rishikesh, do rafting and come back home by Sunday evening and so we headed towards NH 58. Vishal rode the bike all night and our speed was pretty slow because of the fog that started about when we reached Meerut bypass. We reached Rishikesh at 5:30 AM which was too early to go for rafting and too late to book a room at any hotel; so I asked Vishal if he was comfortable in riding the bike for a few more hours. Vishal as always said that he had no problem in riding and could do that for hours to come. We both decided to ride for about 100 KM further on the hills towards New Tehri to have a look at the Tehri Dam and the huge man made lake it had created. We reached New Tehri at around 8:30 AM. It was a beautiful morning. We spent about an hour at New Tehri and Vishal clicked a few pictures. 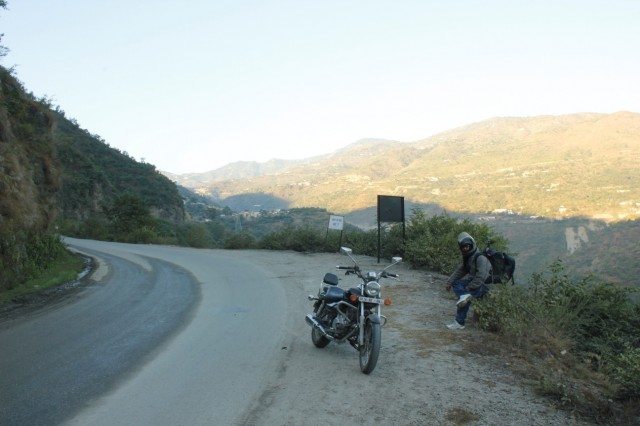 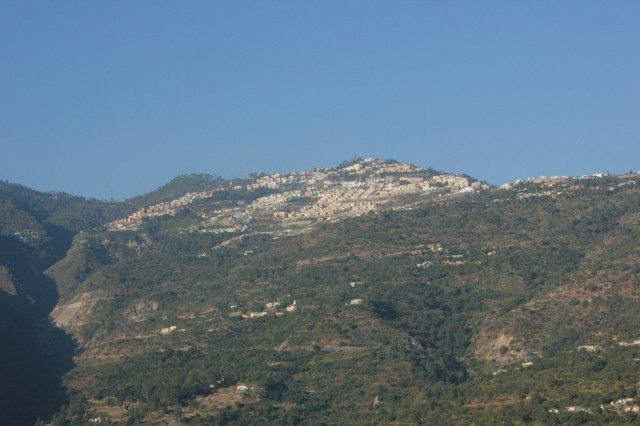 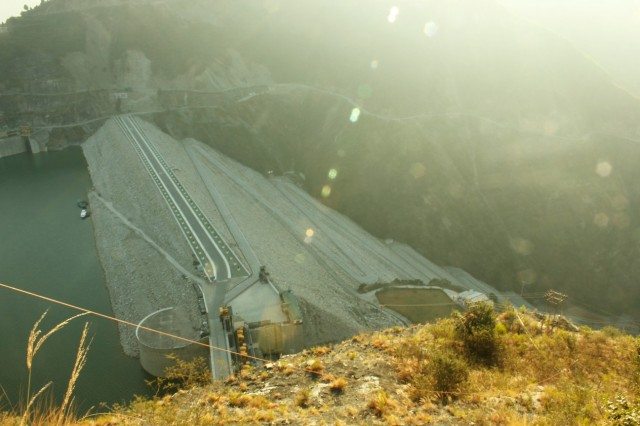 A view of the Tehri dam

And then there was another change in plan. Instead of going back to Rishikesh; we decided to carry on with our journey further towards Chamba and then towards Mussoorie.

We had our morning tea and light highway breakfast at Chamba and rode further towards Dhanolti. A few kilometers before Dhanolti we stopped at a place called Kanataal. There is no actual taal over there but it was an amazing place with a breathtaking view of the snowcapped Himalayas. We spent more than an hour there and Vishal made the optimum use of his camera and took a lot of pictures at that spot.

A view from Chamba 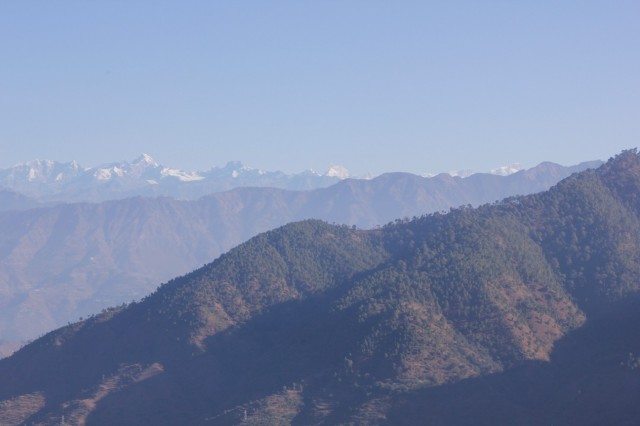 Another view from Chamba 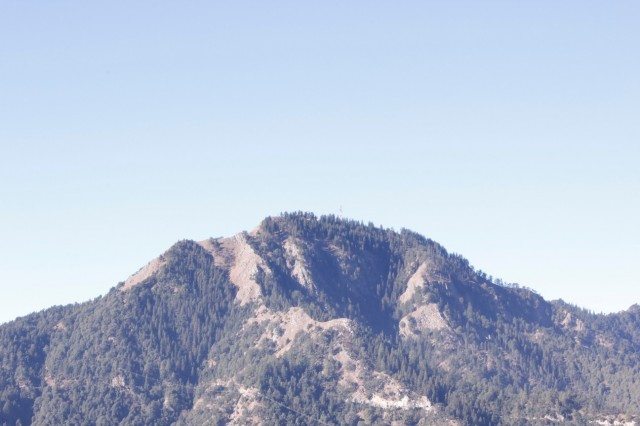 A view from Kanataal Mata Surkanda Devi Temple at the top 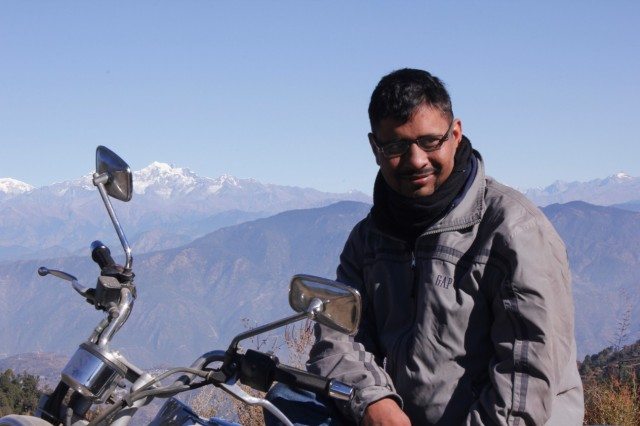 Beautiful snow capped mountaing in the back drop 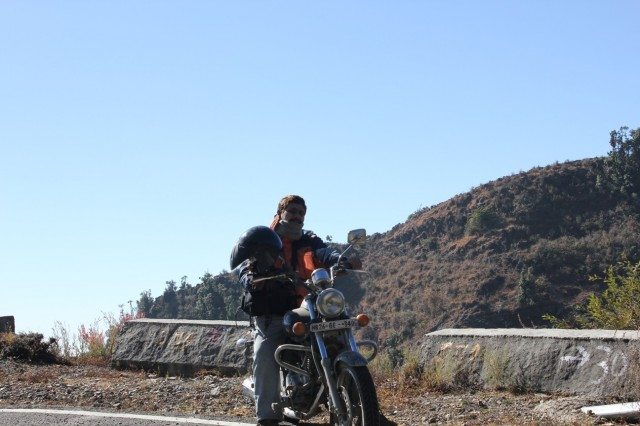 Vishal waiting for me

On the way we met a beautiful newly wed local couple and I could not resist taking the pictures of both. 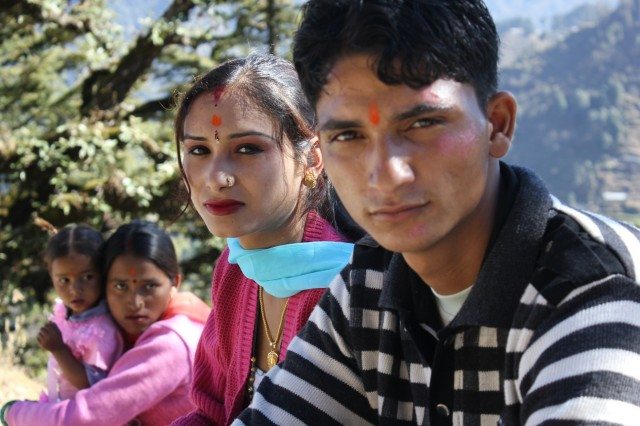 We reached Dhanolti at around 2 PM. It was amazing that nether Vishal nor me were feeling hungry. Probably because we never had time to think about food as we were so mesmerized by the beauty of the Mother Nature. As usual and as always; the moment Vishal used to park the bike, the first thing he used to do was taking his camera out and start shooting indiscriminately like a terrorist with a camera in his hand. 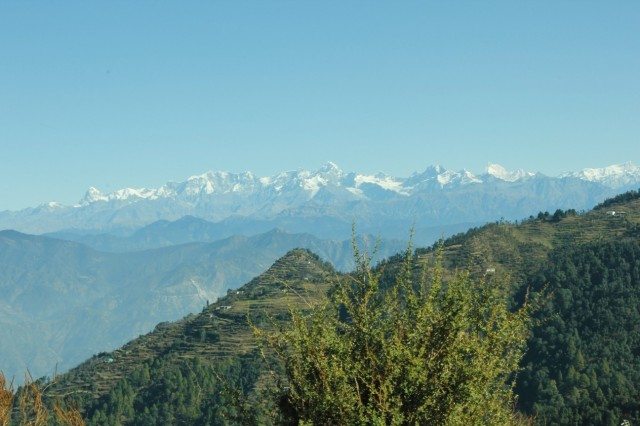 In Dhanolti we saw some kids at a school who were studying under open sky with beautiful sun shining on their tiny heads. It bought the childhood memories back to us. Vishal did not want the studying students to be disturbed but at the same time could not resist taking pictures of the kids, so he picked up a spot from where he could see the kids but the kids could not see him and he took a couple of pictures.

A view of School at Dhanolti

We moved on towards Mussoorie and we were singing songs while riding along the beautiful road and enjoyed every moment of the ride. We reached Mussoorie at around 5 PM. Since it was off season we got a good hotel room at a very reasonable price. Even though Vishal was tired as he had been riding the bike for almost 24 hours now; we still chatted till late in the night recalling our experiences on the various trips that we had done in the past. Vishal also cleaned his camera of the pictures which did not come out well and made room on the memory stick for clicking more pictures the next day.

We decided that we will wake up early in the morning and then head towards Dehradun and then to Delhi. Don’t exactly remember when we fell asleep. The next morning (Sunday morning) we woke up early and I called up my friend Tony who lives in Dehradun and is a big time Ghumakkar just like us. I told him that we were in Mussoorie and are coming to Dehradun and would like to spend some time in Maldevta by the river side. I know that place quite well as I have been there a couple of times on quick weekend getaways.

We reached Dehradun at around 8 AM and while we were waiting for Tony, Vishal was mind boggled to find out that the dhaba where we were waiting had his favorite breakfast BUN MALAI being served. Tony reached us while we both were finishing our BUN MALAI and Chai breakfast. 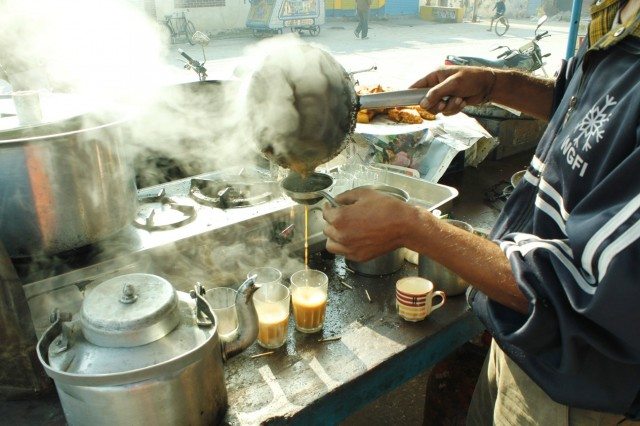 Once we were done; we headed straight towards Maldevta. We picked up a spot and parked our bikes besides the road. We climbed down the hill to reach the water. The water was bone chilling and absolutely crystal clear. We could see the fish in the water and I regretted that I had not bought my fishing hooks and lines and other stuff which I normally carry every time I set out for such trips.

Vishal Tony and me at Maldevta just before the explosions

We were enjoying our time there and Vishal as usual was busy clicking pictures. Just then HELL BROKE. We heard a loud deafening bomb explosion and saw huge boulders size of a car rolling down the mountain towards us. Without thinking what had happened and what was going on; we grabbed our bags and rushed towards safety cover. Luckily there was a small cave sort of a carving in the mountain which could hardly accommodate three people. Just as we were adjusting ourselves in the so called cave; there was another similar explosion which shook us to the core and we had no idea what was going on. The whole scene was covered with dust and it looked like we were suddenly in a war zone.

Huge rocks kept rolling down the mountain and we had no idea what was going on. Once the boulders had stopped coming down we carefully rushed towards our bikes so that we could get away from that place still not knowing what on earth had happened. Just a few hundred meters ahead we met a labor who was working at the road side and we asked him what those explosions were all about. He said that there was road construction going on at the other side of the river and they were blasting the boulders that were obstacles. Well that made sense.

Anyways we decided to move on towards Delhi. We left Dehradun at around noon. After riding for about 20 kilometers we saw a few Gujjar huts besides a dry river. Vishal wanted to take some pictures of the Gujjars and there typical huts so we climbed down to their huts.

The river that we thought was dry actually had a few pools of water. We could not resist investigating those pools. To my elation there were small fish trapped in those shrinking water bodies. I could not stop myself from trying to catch a few. 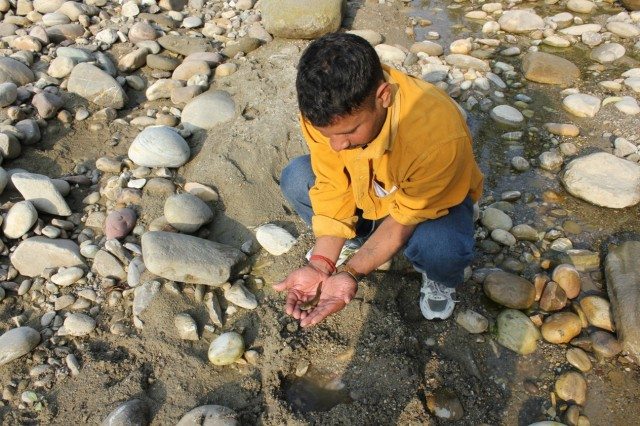 I got one too

I took off my undershirt and used it as net and managed to catch a handful. We collected some firewood and barbecued the fish on the spot. We borrowed some salt from the Gujjars and enjoyed our catch. Even though the fish was small; still it tasted fantastic.

We got so engaged in the activities there that did not realize how fast the time was passing by. We suddenly realized that the sun had started to go down and we had a long way to go so we hit the road once again. We were in no hurry and rode back to Delhi with a reasonable speed and reached Delhi at around 2AM.

What a fantastic weekend it was!!!

I am Harish Bhatt and I was born in Uttarakhand but brought up in Delhi. I love to travel, especially in the Himalayas. I also have a keen interest in bird watching and conservation of wildlife. I love to read wildlife related books and am a wholehearted fan of Jim Corbett…

“A lot of times, people don’t know what they want until you show it to them.” – Steve Jobs We had been going on…