On a bright Saturday morning we left Bhopal for Ujjain in our old trusty Wagon R. Ujjain is around 200 Kms from Bhopal. Roads are very good. Around 100 Kms from Bhopal, MP tourism has opened a food mall at Dodi Ghati. Its very clean and you get all kinds of food like south indian, north indian, chinese, thali, etc. and not to forget Poha & Jalebi the speciality of Madhya Pradesh. After Dodi Ghati, you get view of windmills on the right side of the road. We reached Ujjain by noon. Its around 3 ½ hrs journey from Bhopal. 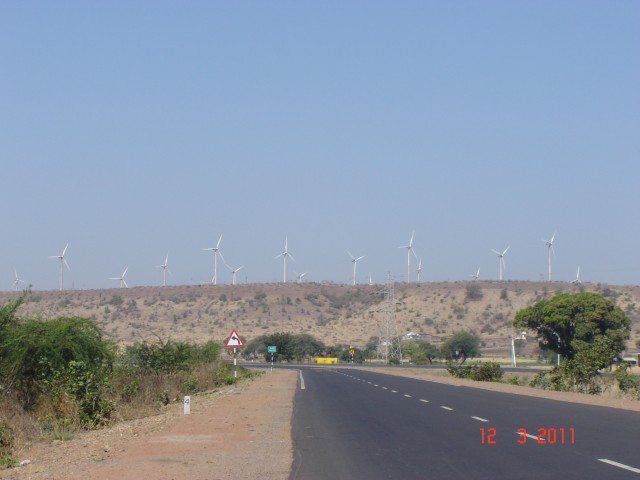 At Ujjain we went to take darshan of Mahakaleshwar. The temple is situated on the banks of Shipra river. Mahakaleshwar is one of the twelve Jyotirlingas of Shiva. The lingam at Mahakala is believed to be swayambhu (born of itself) deriving currents of power from within itself as against the other images and lingams which are ritually established and invested with mantra-shakti. For darshan u can go through general line or pay Rs.151/- per person for VIP entry. Senior citizens and children are not charged for going through this entrance. The temple is three storied and a kunda also exists in the temple complex. Then we left for Indore. Ujjain-Dewas-Indore journey takes around one hour.

In Indore, first we went to Khajrana Ganesh Mandir which is built by Rani Ahilya Bai Holkar. It is believed that praying here fulfils one’s wishes. After this we took an outside view of Rajwada and Chhatris and went to cloth market which has many cloth shops selling saris and dress materials in single locality. You can also see a Jain mandir which is famously known as Kanch mandir / Sheesh mandir situated in cloth market. The decoration on the walls and ceiling is made from the pieces of glasses.

After taking some rest at the hotel Royal Residency which is located near Dawa Bazaar we went to Sarafa Bazaar at night. As the name indicates Sarafa Bazaar is place where most shops are selling gold and other jewellery. But after 9 p.m. when these shops are closed, it is converted in a Khau Galli. You get special food items like bhutta kees, dahi bade, garadu, khopra patties, sabudana khichadi and also other items like sandwich, pav bhaji, etc. In sweets the options are like gulab jamun, mawa bati, malpua, rabdi, etc. Also one drink named Shikanji is available here which is not a normally known lemon drink but a drink made from milk.

Next day after checking out, we went to an area known as 56 Dukan. It is very famous and in any corner of the Indore people will give you direction for this place. One good thing I noticed in Indore was that people are very helpful and ready to give you directions of the place you want to go. 56 Dukan is a cluster of shops selling food items. Madhuram Namkeen / sweet is a good shop where we had our breakfast. Vijay chat house is also famous for food it serves. You can get all items from poha to mawa bati, etc. over here. Unlike Sarafa Bazaar, 56 Dukan is open in normal business hours.
We then proceeded to Lalbagh Palace of Holkars. It is now maintained as a museum. The beautifully built palace gives us glimpses of the way the Royal family used to live. The palace is open from 10 a.m. to 5 p.m. and it is closed on Mondays.

We then proceeded to Omkareshwar. It is around 70 kms from Indore and it takes 2 hrs by road. The road covers two ghats. It will give you a beautiful view if you visit after the rainy season. After crossing Narmada river when you take left turn for Omkareshwar you will see a tall Hanuman statue. 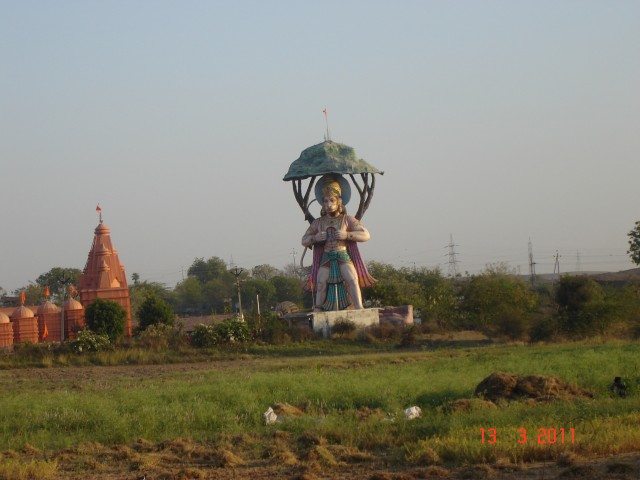 The name Omkareshwar derives from the word Om, which signifies the most sacred Hindu symbol. The Narmada river branches into two and forms an island in the centre on which the temple is situated. The island resembles like the Om. You can take a walk from the bridge or take a boat ride for going to the temple. Doli is also available for around 500 rupees for those who have problems in walking or climbing stairs. There is also one more temple known as Mamleshwar. It is said that Omkareshwar darshan is not complete if you don’t visit this temple too. In Omkareshwar you can find good, simple and homely food at ‘Maharashtrian Bramhin Bhojanalay’ opposite the gate of private paring lot.

The return journey of around 280 kms from Omkareshwar to Bhopal took around 6 hrs including a dinner halt at food mall at Dodi ghati mentioned above.

Name - Samir Athalye. From Mumbai. Worked at Mumbai, Lucknow and now at Bhopal. Like to see places, eat local food.