21.10.2010
The distance between Srisailam and Tirupati is approx 400 KM and it takes around 12 hours by bus. From Srisailam to Tirupati there is a bus run by APRTC and we got our tickets booked for this bus one day in advance. We got up in the morning at around 7:00 AM and spent our time till noon in our guest house only. We boarded the bus and started our journey to Tirupati, the bus leaved Srisailam at approx 3:00 PM. The bus was semi sleeper and it was not so comfortable, so we couldn’t sleep entire night.

Introduction to Tirupati
Tirupati is the city located in the Chittor district of Andhra Pradesh State of India It is located at the foothills of the Eastern Ghats at a distance of Approx. 300 kilometres south of Hyderabad, the capital of the state and 150 kilometres north of Chennai.
Tirupati is famous for the Venkateswara Swamy temple dedicated to Lord Venkateswara, located about 10 kilometres (6.2 mi) north west of Tirupati in the Tirumala hills at an elevation of 853 metres (2,799 ft). One of the most important pilgrimage centers in India, the temple draws millions of pilgrims and is the busiest pilgrimage centre in the world
The temple is situated on Venkatadri, one of the seven hills of Tirumala, and hence is also known as the Temple of Seven Hills (Saptagiri in Sanskrit). The presiding deity of the temple, Lord Venkateswara, is also known by other names – Balaji, Vishnu, Govinda and Srinivasa.

The Tirumala Hill is 3,200 feet (980 m) above sea level, and is about 10.33 square miles (27 km2) in area. It comprises seven peaks, representing the seven hoods of Adisesha, thus earning the name, Seshachalam. The seven peaks are called Seshadri, Neeladri, Garudadri, Anjanadri, Vrushabadri, Narayanadri and Venkatadri. The sacred temple of Sri Venkateswara is located on the seventh peak, Venkatadri (Venkata Hill),
The temple is reportedly the richest and the most visited place of worship in the world. The temple is visited by about 50,000 to 100,000 pilgrims daily (3 to 4 crore people annually on an average), while on special occasions and festivals, like the annual Brahmotsavam, the number of pilgrims shoots up to 500,000, making it the most visited holy place in the world.
According to legend, the temple has a murti (deity) of Lord Venkateswara, believed to have resided there for the entire Kali Yuga.

22.10.2010
Well, our bus reached Tirupati at 04:30 AM; we got out of bus at Tirupati bus station, it was dark as the sun was not rose that time, but the but station was so busy even that time that we could say that Tirupati never sleeps. There are buses continuously ply between Tirupati and Tirumala hills and the distance between two is 11 KM, we boarded on an APRTC bus at 05:00 Am which took us Tirumala at 05:45. There are free buses also ply between Tirupati and Tirumala. So after getting down at Tirumala our first priority was to look for a good stay arrangement. We came to know that in Tirumala there is no any private hotels or guest houses, there are only TTD (Tirumal Tirupati Devsthanam) managed cottages (Guest houses), and the rent for these cottages for 24 hrs. is Rs. 50 only, but the problem is that one has to be in queue to get token for cottage and in the queue it normally takes 2-3 hours to reach the counter. I took a queue to get token at 6:00 AM and got token at 8:30 Am. After getting token we took a bus to reach our guest hour. There are free buses run by TTD in Tirumala to reach from one place to another, they look very special and unique and they are ghat eligible buses. In 10 minutes we reached our guest house. We had decided to stay there for 2 days so we were not in a hurry for darshan. After reaching guest house first we got fresh and took bath as we were very tired after a long journey from Srisailam to Tirupati and then 2-3 hours in queue.
After taking bath we were feeling good and little relived from tiredness, so we decided to go out in search of some breakfast. Again we took that special free bus. 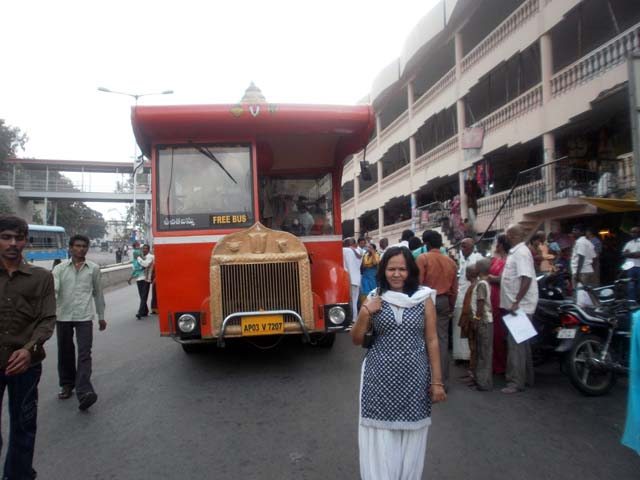 We then went to a restaurant for breakfast, took our breakfast and roam around the temple town (We planned to do darshan next day morning) and went in a complex for some shopping. 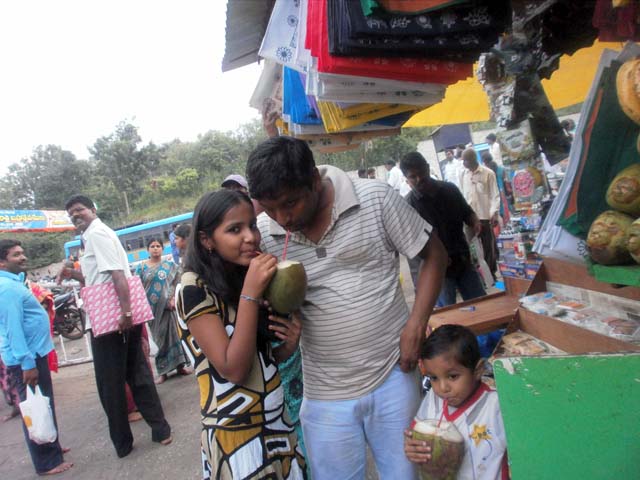 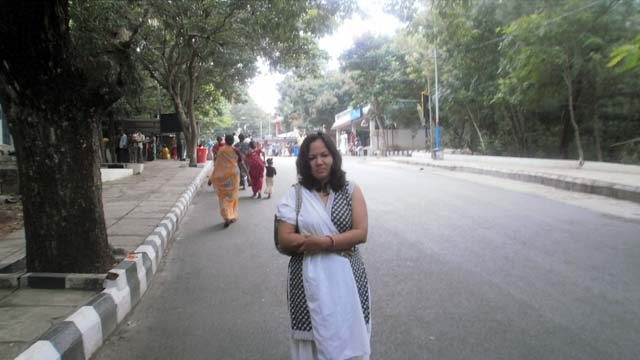 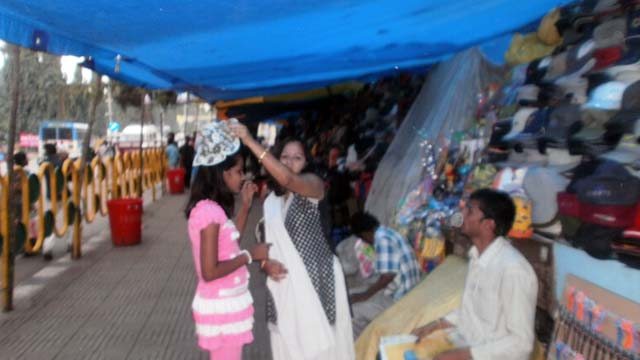 As we were roaming around the market and at around 12:00 noon suddenly the climate started changing its mood and it started getting dark and cloudy and the whole Tirumala covered with fog and within a few minutes it started drizzling and finally started heavy rain.

The main road in Tirumala covered with cloud.

The Cloudy weather in Tirumala 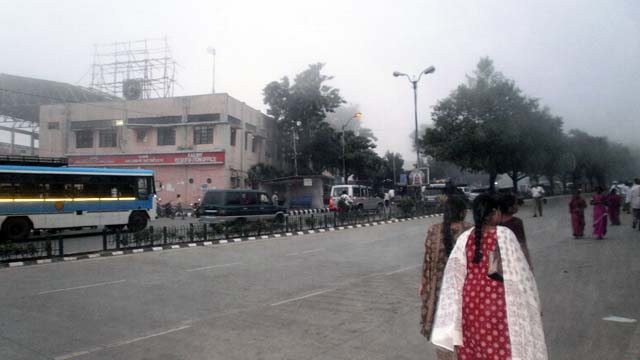 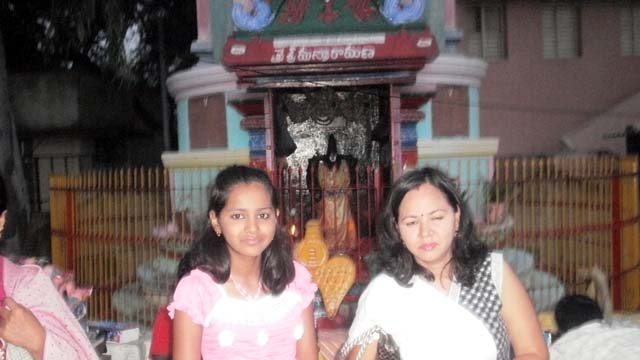 A Small Temple in Tirumala

As it started raining we took a bus and went straight to our cottage, we were soaked with rain water so first we changed our wet cloths and then laid on bed to take some rest.
In the evening at around 6:00 PM we went in the town in search of food. We came to know that there is a TTD managed canteen where food is served to devotees free of cost as Prasad of lord Venkateswara. 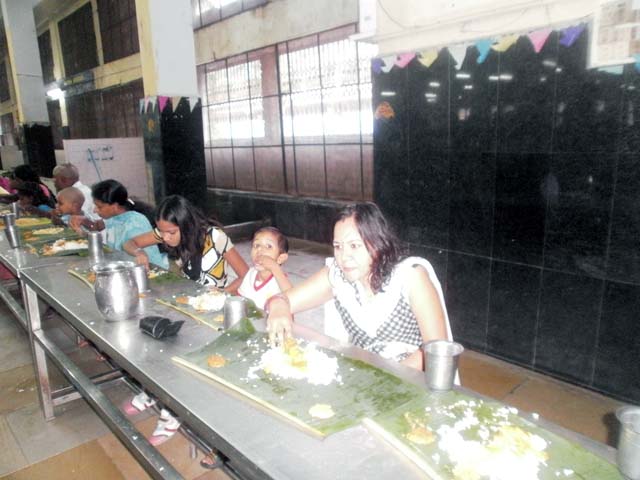 Having dinner (Prasad) in TTD canteen

The food was served on the banana leaves which made it so tasty. After dinner we went to our guest house and gone to bed as in morning we had to wake up early in the morning.
23.10.2010
Next day
Next day we woke up early in the morning at 6:00 Am and got ready for darshan. We decided first to tonsure the heads of mine and my four year old son Vedant to offer them to lord Venkateswara.

Hair tonsuring
Many devotees have their head tonsured and offer them to lord. The daily amount of hair collected is over a ton. The hair thus gathered is sold by the temple organization a few times a year by public auction to international buyers for use as hair extensions and in cosmetics, bringing over $6 million to the temple’s treasury.As per puranas hair given by devotees is to coverup the lost hair(it is a very small portion) of lord venkateshwara swamy. 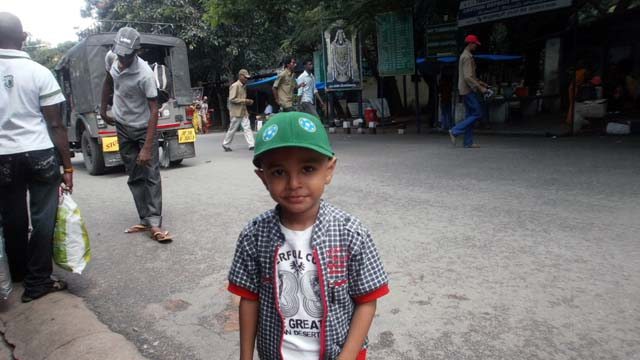 After offering our hairs to lord Venkateswara we bought caps from a shop and then proceeded for darshan of lord Venkateswara.
In order to save our time we purchased Shighra darshan tickets at a charge of Rs. 300 each (Also there are Sudarshan tickets at Rs. 50). Through Shighra darshan tickets one can have darshan in 3-4 hours, and through Rs. 50 ticket it takes approx. 6-7 hrs and in free queue there is no limit, it may take 10-12 hours or more.
So we entered in Vaikuntham Queue complex with our Shighra darshan ticket at 7:00 Am. The entrance is through the vaikuntam queue complex. The complex is a series of interconnected halls that leads to the main temple.
The main temple facing the east is a masterpiece of Dravidian architecture and the Vimana and Dwajasthamba are fully gold plated. This is the third richest pilgrimage centre in the world after the Vatican and Mecca. Lakhs of devotees throng to the temple throughout the year and their belief and faith in this god is stupendous. The annual collections from the votive offerings is ploughed back into various welfare schemes. The specially constituted Devasthanam Board (TTD)oversees the administration including maintenance of roads from Tirumala to Tirupati, guest houses, cottages, etc. 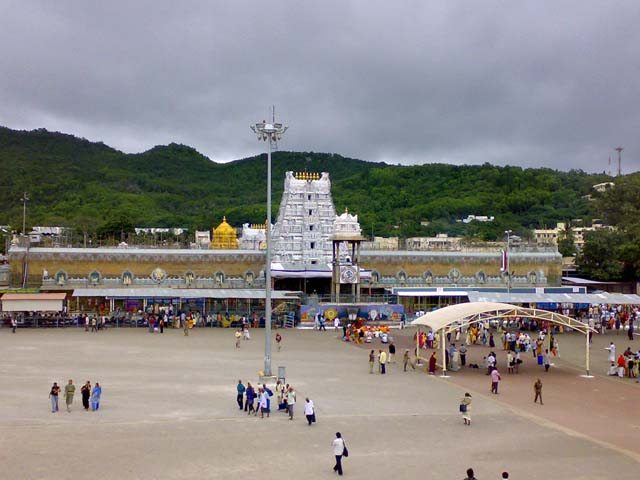 A view of temple complex. 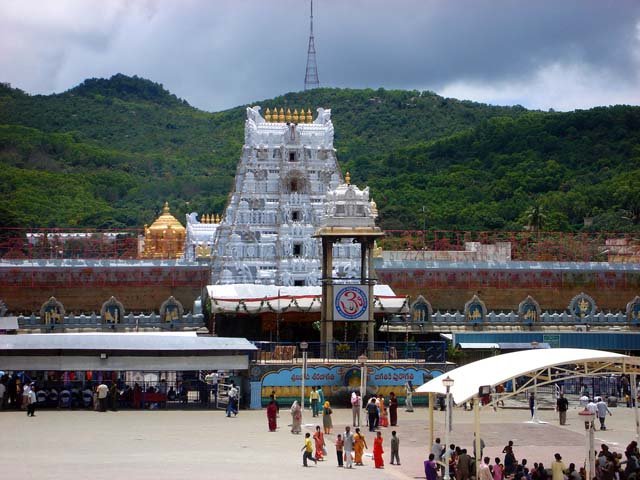 Another View of temple complex 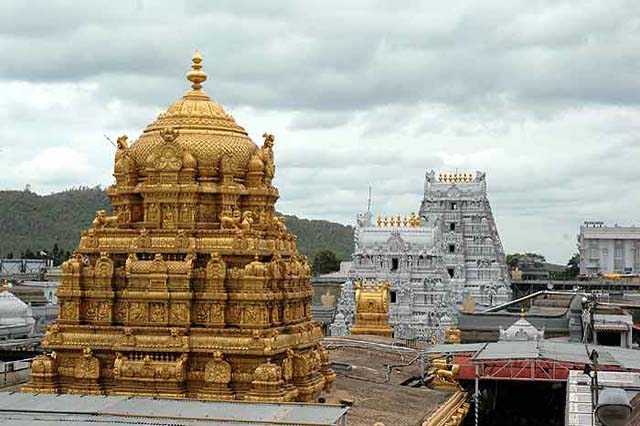 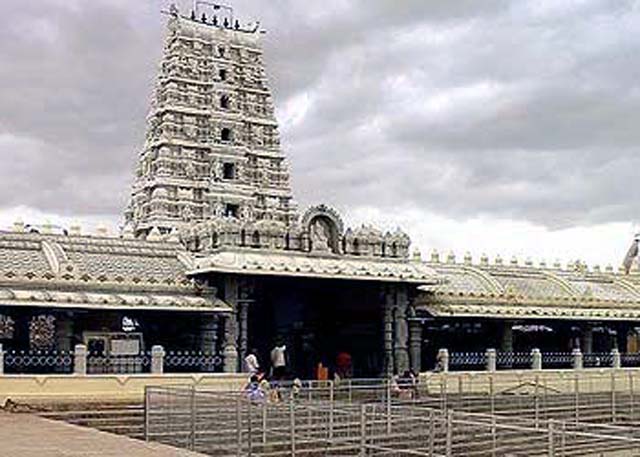 View of entrance to main temple 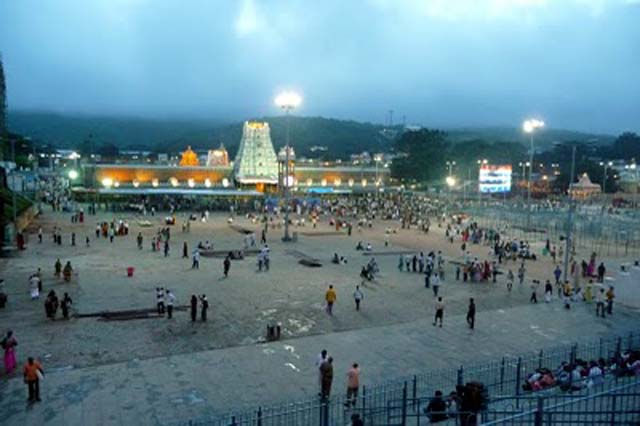 After spending four hours in queue complex we reached to the sanctum sanctorum (Garbh Grih).

Garbha Griha (Sanctum Sanctorum)
In the Garbha Griha, the 7 ft idol of the Lord is made of granite stone standing majestically on a high lotus pedestal. The crown is 20 ft high and the Shanka and Chakra studded with diamonds on both hands dazzle the eye. 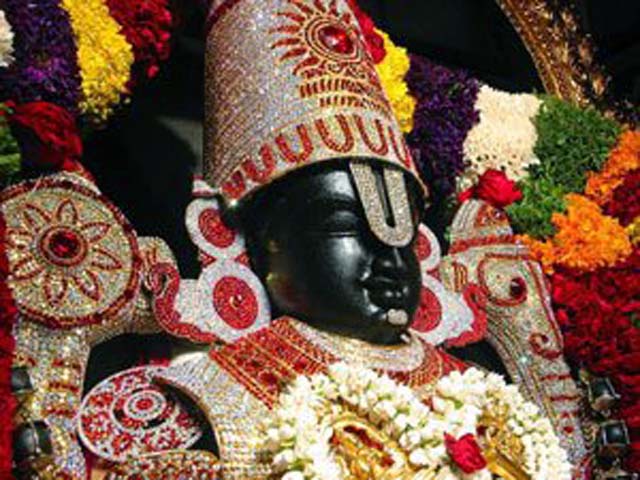 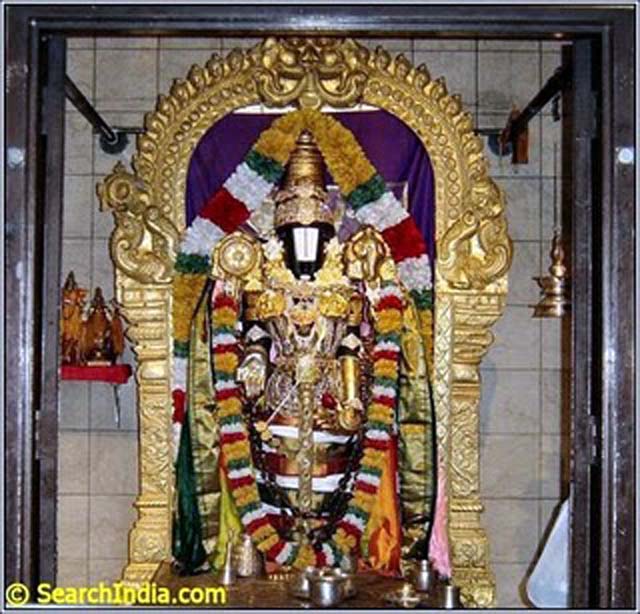 Lord Venkateswara (Balaji)
After great darshan of lord in garbh grih we once again arranged ourselves in a queue for prasad. With each Shighra darshan ticket we can get 2 laddus free, so we got 4 laddus as a prasad.
The laddus (Prasad) of Tirupati temple are made of pure ghee and enriched with dryfruits are famous for their delicious taste and big size.
After taking prasad, we moved towords bust stand to take bus for Chennai as our train was from chennai. Chennai is some 120 Km from Tirupati, after reaching Chennai we took a room in hotel.

25.10.2010
We reached Bhopal in the morning at 10:00 AM, took some breakfast and took a bus for indore and finally reached our home at 7:00 PM, thus ended our cherishing journey to Srisailam and Tirupati.
(Some informations and pictures have been taken with thanks from some websites in courtesy in service of lord Balaji)

I am a Mechanical Engineer & Business Administration Graduate by education and a Quality Manager by profession. I stay near Indore (MP). Traveling, Music, Literature and natural beauty in rains are my passion. I am fond of knowing culture of different places, visiting new places. We (My family) are devotees of Lord Shiva and are extremely interested in visiting abodes of lord shiva (Shivalayas). We took a pledge to visit at least one Jyortirlinga each year and so far we have completed Ten (10). Our recent jyotirling visit was Bhimashankar Jyotirling and next we have planned to visit Rameshwaram Jyotirling. Visit My Blog: http://mukeshbhalse.blogspot.com

When in Doubt, ask again. Ask someone else if you feel that the shmuck you just asked for directions was an inebriated nincompoop. I believe that even now, in the age of GPS and other bond gadgetry, the ultimate GPS is still the roadside paan wallah. Such is the level of accuracy & dependability, that i think they should be hired to proofread the local Google maps data.

You stop by a tapri/ khokha (as referred to in mumbai), light up a smoke, order a sweet paan, strike up a light conversation about how good or bad the weather is, and that’s it. Camaraderie set. The paan wallah will now easily divulge even the most complex info about the routes to take, routes to avoid, probable shortcuts & other awesome places to see in between. Screw you, GMaps !! I got my own local wiki/GPS/navigator/tour-guide.