Fortunately, I got an opportunity to spend two months in Hyderabad. One weekend, I decided to visit Aurangabad to encounter ancient history in the caves of Ajanta and Ellora. It was again an unplanned journey, so I was not able to book any train tickets. I decided to go there by a bus from Hyderabad. I left my hotel at Begumpet around 8 pm in the night and reached to Mahatma Gandhi Bus Terminus at Hyderabad in approx one hour. This is the major bus terminus of Hyderabad for interstate buses. There was no direct bus available for Aurangabad. I searched nearby place to Aurangabad and found Nanded, which is nearly a midpoint between Hyderbad and Aurangabad. But unfortunately the bus was after an hour. The departute and destination places written on the bus were in Telugu only. So, it was really difficult to get a right bus. You have to ask the people again and again. Only few buses had these are in English. I dint want to waste my time, so caught a bus to Nizamabad, that is 4 hrs away from Hyderabad. I thought to catch a bus to Aurangabad from Nizamabad and in worst case to again catch another bus to Nanded.

Around 1 AM, I was at Nizamabad bus stand. But there is no direct bus to Aurangabad. So I took a bus to Nanded and reached to Nanded around 4.45 AM. The bus conductor has informed me that there is a train from Nanded to Aurangabad around 5.30 AM. So, I left the bus at Nanded railway station. Nanded is a famous priligimage center for Sikhs Religion. The train was on time and I reached Aurangabad around 10 am. I took breakfast near bus stand and then caught a straight bus to Ajanta. Ajanta is around 90 kms from Aurangabad and situated en-route Aurangabad-Jalgaon. Bus services are very frequent on this route.

The road to Ajanta is very beautiful. It passes first through the fertile plain for 20-30 kms and then there are hilly terrain all around upto Ajanta. We reached Ajanta in 2.30 hrs.
Caves are situated on the hills and 4 kms away from the main road. MSRTC operates buses on frequent intervals between main entrance and the caves. They charges around Rs. 7 for non-AC buses and Rs. 15 for AC buses. If bus got packed with passengers, you can board in next bus within 10 minutes only, so there is no hurry. Although people seem to be happy in standing mode also, as it is only 4 kms journey and take maximum 15 minutes.

There is lot of shops at the entry point to Ajanta. You can buy souvenir, food, water etc from there. Water is also available in the cave area at frequent intervals.
The admission ticket to Ajanta is Rs.10 for Indian Nationals and Rs. 250 for foreign nationals same as other UNESO Heritage Sites in India. There are free admissions for children of 15 years of age and below. Video camera fee is Rs. 25 and for outside use only. 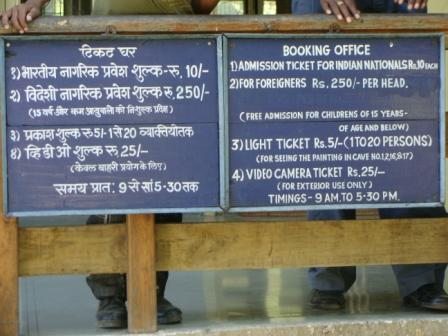 Ajanta caves are very dark inside. For seeing the paintings in Cave 1, 2 , 16 and 17, you have to buy a ticket of Rs. 5 as a lighting fee. One ticket is approved for a group upto 20 persons.
You can use still cameras inside the caves but without flash only. Flashes are not allowed to prevent the degradation of paintings by the reaction of light. 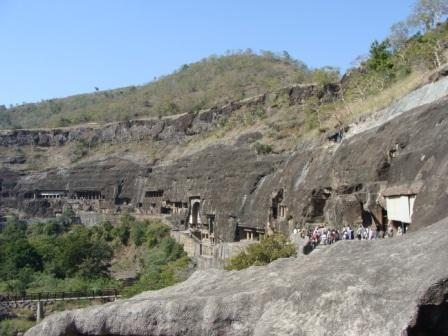 Painting on the roof 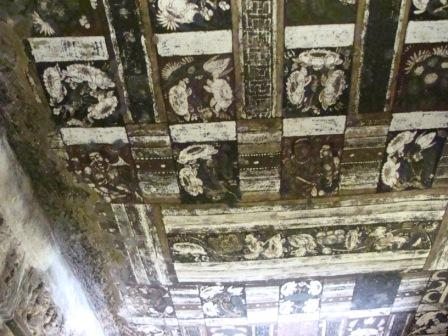 There are 30 caves in Ajanta of which 9, 10, 19, 26 and 29 are chaitya-grihas and the rest are monasteries. These caves were discovered in AD 1819 and were built up in the earlier 2nd century BC-AD. Most of the paintings in Ajanta are right from 2nd century BC-AD and some of them about the fifth century AD and continued for the next two centuries. 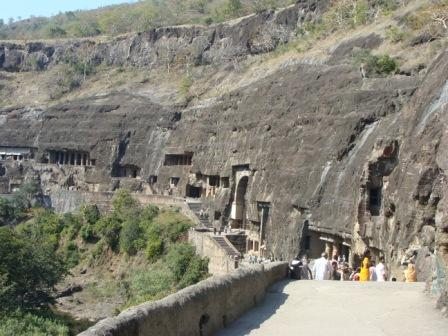 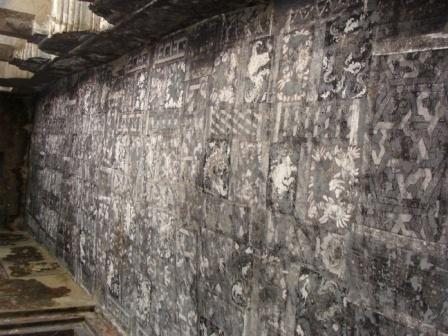 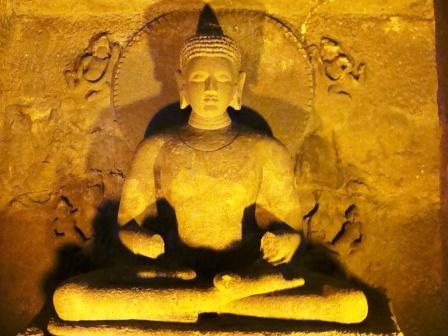 All paintings show heavy religious influence and centre around Buddha, Bodhisattvas, incidents from the life of Buddha and the Jatakas. The paintings are executed on a ground of mud-plaster in the tempera technique. 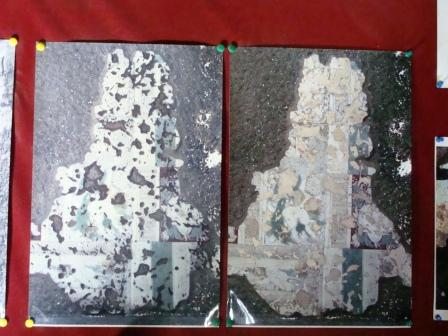 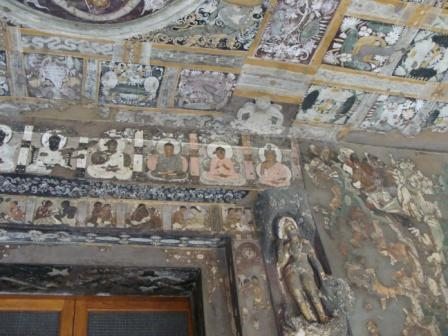 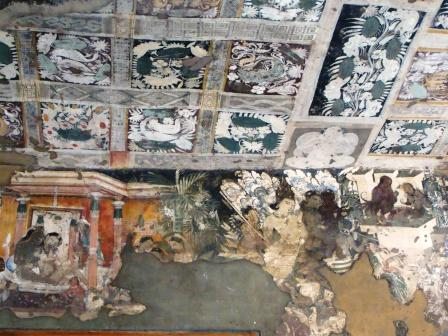 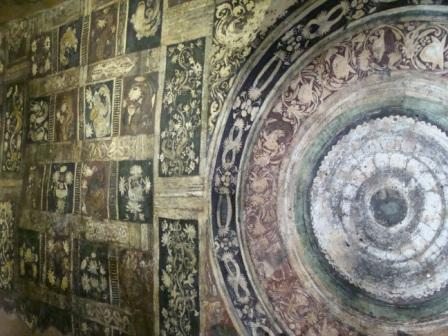 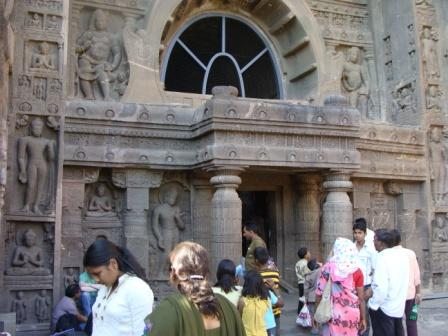 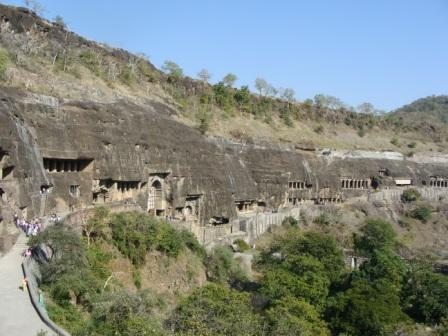 I spend around three hours there. Then I came back to Aurangabad by 8 pm. 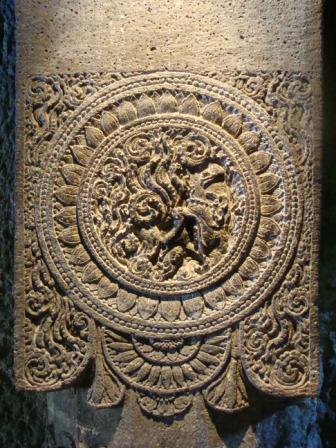 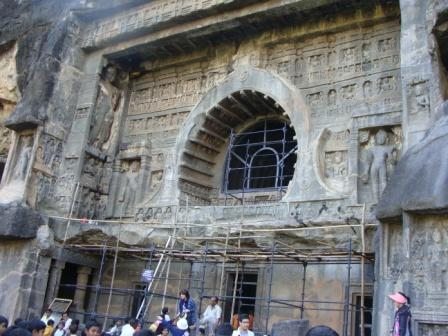 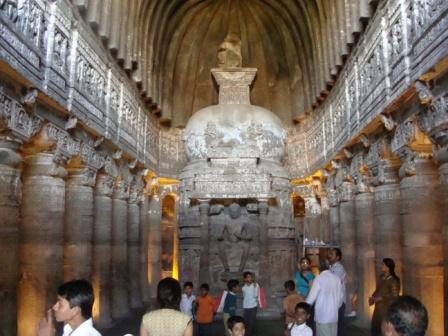 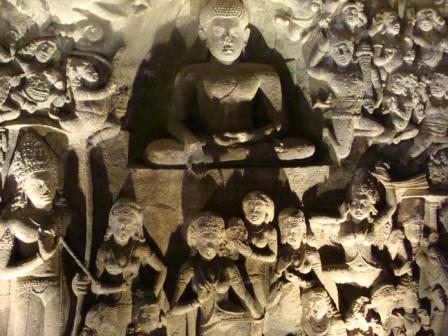 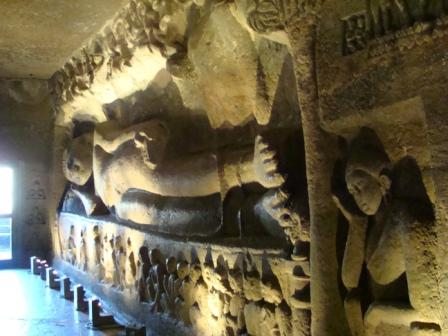 I planned to visit Ellora Caves next day in the morning, but I also wanted to visit Shirdi. So, after taking dinner I took a bus to Shirdi and reached there by 11.45 PM. It is around 130 kms away from Aurangabad. The temple gets closed around 11 PM every day, so I decided to stay there till the morning. I booked a room in a guest house and planned to visit the temple early in the morning by 5 AM, when it opens for the Darshan. There are a large numbers of guest house all around the temple complex. It is only 5 minutes away from my room. I woke up early in the morning by 6 AM and completed Darshan by 7.30 AM after waiting in a long queue.
Then I returned back to Aurangabad by 11 AM to visit the Ellora Caves.

Beauty of the caves of AJANTA was last modified: August 4th, 2022 by Avanish Maurya

All other things were to be arranged locally, except for those at number 1 above. I had kept all my originals in safety of my Home in Lucknow. Fortunately parents were scheduled to visit on 16th December. I immediately cabled them requesting to pre-pone their visit and come charging ASAP. Poor souls were here on 14th . On 15th, I made a sort of record, by getting the big bunch of documents along with the filled up passport form ready, for which my colleagues at HR are to be thanked. I even got my photographs for UK visa (minding the 4.5×3.5 size, light background and locations and proportions) done.