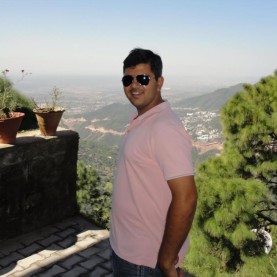 I'm from Srinagar, J&K, currently at Gurgaon for completing my CA course. Driving and exploring new places is my passion. My dream is to do Jammu-Leh-Manali at least once in my life.

There is this railway crossing on the Dinanagar-Gurdaspur stretch of NH-15 which lies miraculously at the centre of a leftward curve. Most of the drivers usually get caught unaware at this crossing. I was familiar with the notoriety of this curve and hence was attentive to its arrival. Just after crossing over the railway line, we stopped near a fruit-seller to fill our empty stomachs and sat on the nearby tube-well to chat. Our jokes and pranks didn’t seem to end anytime soon but we realised that we should pull ahead. Back to the car, we hit the road again and entered Gurdaspur city after 10 kms. There is a bypass which you can take to avoid the traffic and congestion at the Gurdaspur town but since it was a national holiday (2nd Oct), the traffic was sparse and we drove through the city. Looking around for some nice place to have a proper breakfast, all four of us had our necks craned out of the window. However, any place proposed by one was put down by the rest…a big disadvantage of traveling in an all-guys-group i think. Suddenly, I saw a turbanated policeman signalling us to stop. I just wanted to zip ahead as we were on the right side of law in every respect (thats what I believed till then) but Jaspreet insisted that we should stop as the Punjab Police cops chase such cars which dont stop and then harrass you even more…the job they are best at. Stopping a few metres ahead, I asked everyone to relax and not to get out of the car…a mistake that cost us 200 bucks!!! The Sardarji policeman came upto our car…positioned his elbows on the window and asked where we were from. We replied in Punjabi that we are from Jammu and heading towards The Harmandir Sahib. The Sardarji smiled at us and asked us why we had not fastened our seat belts…..HOLY SHIT… We realised that after we started driving from our last stop where we had fruits, we had just forgot to fasten our seat-belts.