When I reached in Ahmadabad on 20th December,2013, I had many doubts about Guajarati, their food, their culture..their language (kemcho, suche) & so many things. Coming from Delhi, famed for its cosmopolitan food platter right from ‘Paratha’ and ‘Butter Naan’ for breakfast to ‘paneer tikka’, ‘Kadhi Chawal’, ‘Rajma Chawal’ and ‘butter chicken’ for lunch; wholesome ‘poha’ for an evening snack to a nice plate of Pulao or Paratha and Mutton or chicken for dinner. Naturally as a first visitor my mind occupied by their food & their gesture.

The purpose
Visited to my friend’s house but in my inner though seemed to more curious about “karnavati” the old name of Ahmadabad. The city was founded by King Karandev 1 in the 11th century and originally called “Karnavati”. The Hindu kingdom of Karnavati retained its importance until 1411 when Sultan Ahmed Shah conquered Gujarat and the city was renamed Ahmadabad after him. The city of Ahmedabad went on expanding in every direction by the addition of new areas on the sides of the river, with well laid out beautiful buildings, lakes, temples and mosques.

The station was neat & clean. All the way to home my mind captured the picture of the place with hungry eyes. The old city & new city is connected by bridge on Sabarmati River. Both the city is very clean & there is not too much traffic as compare to Delhi.

I tried to depict about Ahmadabad with following points :-

Food :- Ahmadabad is a gastronomic paradise. You will find at least one restaurant in every nook and corner, anywhere in Ahmadabad. Gujarati people are fond of eating and the food generally tends to be on the sweeter side. Guajarati’s are mostly vegetarians hence most local fare consists of vegetarian fare.

We had lots of Gujarati specialties include Dhokla, Khandvi, Fapda, Gathia, Bhajiya, PuramPuli,Panipoori… & the taste was amazing, with sweet added in every food. Ahmedabad is a foodie city alright – Gujaratis love their farsaan, dhokla, theplas and thalis. 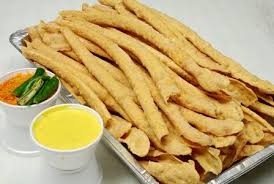 Some of the notable restaurants in the city are:
• Havmor :Famous for its Chola Bhatura a famous north Indian dish. (Not managed time to taste )
• Honest Another well-known fast-food chain in Ahmedabad that started as road-side joint serving Pav-Bhaji and Pulav . We had Pav-Bhaji here & the taste was really so good. As a foodie like me enjoyed the food.
• Janta Ice-Creams & Kulfi They only serve dessert. We tried their famous Malai Kulfi & BPT Kulfi.

Later I knew the meaning of BPT (Badam, Pesta,Keasr)

With the origin of a large number of multi-cuisine food joints, Ahmedabad surprises you with its wide variety of appetizing feasts from around the globe. Italian, Mexican, Thai, Lebanese, Chinese and Continental, Ahmedabad indeed has an impressive list of cuisines to offer to its foodies. In C.G.Road many multi cuisine restaurants that serve a variety of continental. This is a very unique experience in terms of not only taste and quality but also the way the items are served.

Otherwise, its fun to eat at one of the road side stalls, especially at the Khau Galli in Law Garden area.Various stalls start operating in both these places. For western palates, a good way to find new restaurants is to ask a local, especially someone young who would certainly know about such places. International chains such as Pizza Hut, McDonalds, Subway are present throughout the city. 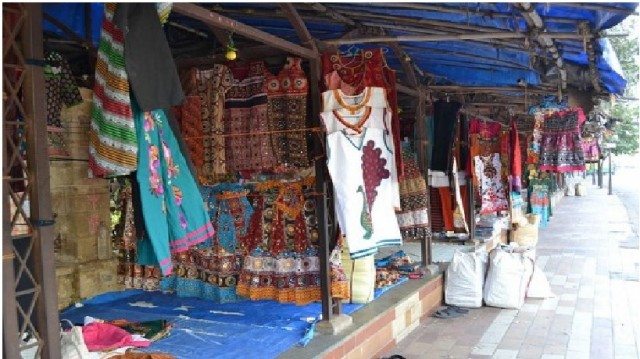 Shopping Place:- Though I am very shopaholic so shopping is my alltime favorite & wherever I go I buy lots of stuff… Shopping in Ahmedabad can charm all tourists . Though you’ll get all the big famous brands here, there’s an old world charm about the market place. Get ready to load your bags with some astonishing bandhej sarees, pottery, handicrafts, silk patola sarees and antique jewelery. If nothing other than the best and the most exclusive is what you are looking for. There is many shopping malls are in Ahmedabad, but few are running good because of the savings mentality of the people.

• Law Garden Night Market:It’s the haven for shopaholics and you’ll have a chance to rub shoulders with tourists and residents alike. It gets going every evening and the seemingly usual road takes a sudden transformation with vendors and shopkeepers bustling on the scene. Sharpen your bargaining skills for the best prices and you walk away with bagsful of exclusive wall hangings, bandhej sarees, chaniyas (long colourful skirts), antique jewelery, Gujrati handicraft Bags and more.

Tourist Spot: We did not have much time to visit all the place.Still within two days we tried to visit as much place as possible.

1. Kankaria Lake :- On 20th December, at night we went This beautiful lake. The temperature was very pleasant to visit lake at night. It is a circular lake constructed in 1451 by Sultan Qutubub-Din. The lake is a popular recreation center, surrounded by parks, ‘Bal Vatika’, an aquarium, a boat club, a natural historical museum and a zoo. It was quite late so we could not visit the zoo. Kankaria Lake is one of the most favorite picnic spots of the people of Ahmedabad. Adjacent to the lake, lies a beautiful garden called Nagina Wadi. For people seeking peace, there can be no better place than Kankaria Lake.

Adalaj,Step-well:On next day morning we went to Step Well. It was located at Adalaj,a village 18km to the north of Ahmedabad. The Vav (step-well) at Adalaj derives its name from the lady patron, Ruda, wife of the Vaghela chief, Virsinh; who built it in the 15th or 16th century A.D. The Vav, laid out in the north-south direction, the well in the north and in the south, have a total length of 75.3 metres. The five-storied, step-well located in the sleepy village of Adlaj is a marvel of architecture. This unique water work is an excellent blend of Hindu and Islamic styles. Built entirely of sandstone, one can enter into this step-well from three sides, which consist of octagonal landings with huge carved colonnades and intricately carved niches. The architecture of this well also shows the influence of the earlier Solanki rulers of Gujarat.

Adalaj Vav is counted amongst the finest architectural structures of Gujarat.The unique feature of Adalaj Vav is that apart from conserving water for drinking purposes, it also serves as a cooling chamber in the hot summer months. The steps of the well were used by the travelers and caravans passing from the area, on the due course of their trade routes. With time, the well has become a memorial of the love of the queen for her husband. One can still see water in the well which is a living example of spirit of the queen.

Vaishnodevi Temple :-On the way we found A popular temple of goddess Vaishno devi located on Sarkhej-Gandhinagar highway. It is modeled based on Vaishno devi temple situated in Jammu & Kashmir. It can be seen crowded everyday, and on weekends devotees from all over the India visits this temple. 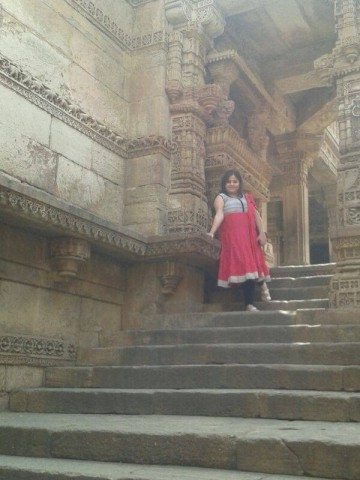 Principle deity being Vaishno Devi the temple is considered to be a true replica of the famous temple in Jammu & Kashmir for what devotees of Goddess Vaishno Devi flocks here round the year. The only difference between the two is that one at Ahmedabad can be visited with in a couple of hours. The Vaishno Devi temple of Ahmedabad also remains flooded with followers during Navaratri and is decorated beautifully when the devotee offers coconut, clothes, fruits, rice etc.

Sabarmati Ashram – Gandhi Ashram, Shubhas Bridge :-
A very peaceful On a quiet stretch of the Sabarmati river is the Gandhi Ashram set up in 1917. During the lifetime of Mahatma Gandhi it was known as Satyagraha Ashram and was the center of India’s freedom movement. It was from here, in 1930, that the Mahatma began his famous “Dandi March” to the sea to protest against the Salt Tax imposed by the British. ‘Hridaya Kunj’, the simple cottage where he lived, is preserved as a National Monument. A Gandhi Memorial Center, a Library and a Sound-and-Light spectacle offer an interesting display of the Mahatma’s life and work.

We bought pens, Stand many things at reasonable price. For people interested in knowing about the freedom struggle of India, this is just the perfect place. Infact, it is a storehouse of useful piece of information.
The life long truth at Sabarmati Ashram

The two days remarkable Ahmadabad trip was awesome…. The culture, food, people, language all are perfectly depict in my mind, my heart & I enjoyed a lot the place. Side by side I will hope to visit all over the world & nourish myself with fragrance of different culture & cultivate my journey….

An awesome trip to Ahmadabad was last modified: December 18th, 2021 by Pamela

It was around 1330 hrs when we completed the places and headed for our hotel, which was not very far. Had a lunch and in the afternoon went to the tomb of “Saadat Ali Khan”.

Just almost opposite the tomb was “Begam Hazrat Mahal Park”, which was build in the honour of a beautiful and courageous woman, dated back in 1962.