21-July-2014: Monday: Visit to the Krishna Temples and Sajjangarh, Udaipur.

After enjoying a rejuvenating four days at Club Mahindra Fort Kumbhalgarh we checked out from our cozy tent at 8.30 am. It took some time to settle our bills, by which time our cabbie Rajkumar arrived and was waiting for us. We wanted to visit the Krishna temples at Kankroli and Nathdwara, then go to Sajjangarh (Monsoon Palace) on a hilltop near Udaipur before checking in to the Club Mahindra Udaipur resort.

Rajkumar took us via Kelwara and Rajsamand to Kankroli. The road was not very good and passed through many typical Rajasthani villages, and a lot of marble mines as we approached closer to Rajsamand.

We reached the Dwarkadheesh Temple at around 10.30 am. This temple is located at Kankroli, on the banks of the Rajsamand Lake in Rajasthan. It is about 15 km north of the Shrinathji temple of Nathdwara on National Highway No.8. 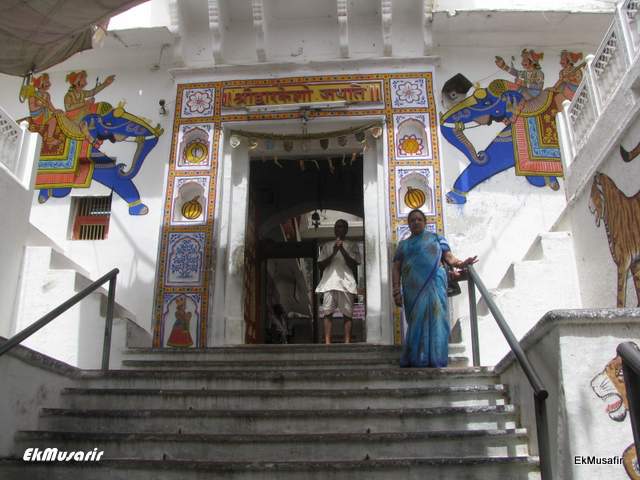 Entrance to the Dwarkadheesh Temple, Kankroli.

The temple opens for darshan at fixed timings. We reached the temple at 11 am and had to wait till 11.30 am to be let in. In the meanwhile we walked to the ghat behind the temple overlooking Rajsamand Lake and fed the fish, of which there were many of various shapes and sizes. They would jump out of the water as soon as we dropped the grain into the lake. 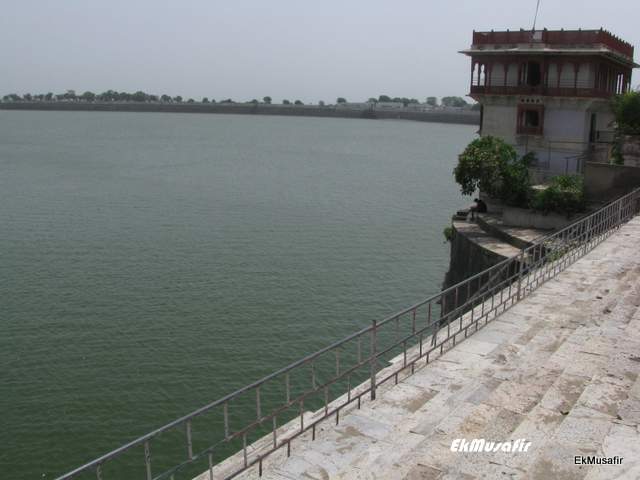 This temple is not as crowded as the more famous Nathdwara temple, and there was no jostling and pushing as happens at Nathdwara. We got a good darshan of Shrinathji (Lord Krishna). We collected the prasad (holy food) and enjoyed the music being played by the temple band.

Around noon we moved ahead towards Nathdwara on National Highway No.8 (NH8) and had reached the temple town by 12.45 pm. There is a vehicle entry tax of Rs.40 as you enter Nathdwara town, and parking charges of Rs.30 in the parking lot next to the main temple. 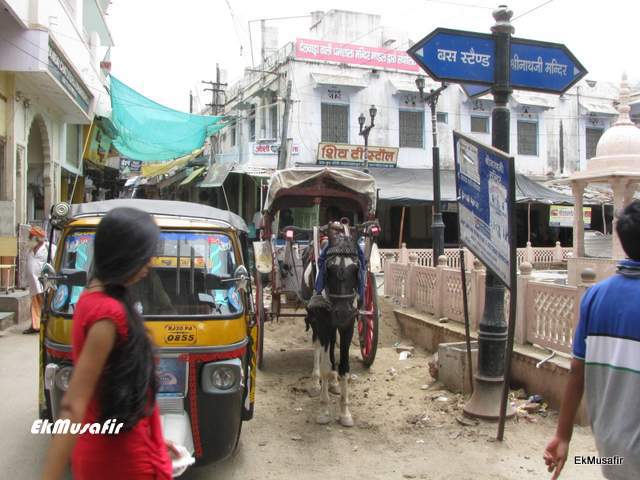 The temple timings vary slightly on a daily basis and are announced publicly and on their website. It generally starts at 5.30 am with the ‘mangala’ darshan, followed by ‘shingar’ at 8.15 am, ‘gwal’ at 9.30 am, ‘rajbhog’ at 10.30 am, ‘uthaapan’ at 3.30 pm, ‘sandhya’ at 5.15 pm, ‘shayan’ at 6.30 pm. ‘Bhog’ is distributed among devotees as ‘prasad’ (holy food). At each darshan the child in Lord Krishna is pampered in a different way, from his awakening, to his feeding, grooming, afternoon siesta, evening outing and dinner, till he is finally tucked in to bed. Devotional music is played during the darshans. The timings change completely on festival days.

This temple visit is not for the people weak in heart and body. Entry is free, but photography inside the sanctum is strictly prohibited. All cameras, mobiles and smart phones are to be left outside for which you will be given a token at the counter. It is preferable to leave them locked in your vehicle, because there is a rush at the counter after darshan, and it can take a while to get your valuables back.

After the temple visit you can do some shopping in the ‘Chaupati Bazar’, in the lane leading to the temple. Pictures and paintings of Srinathji are readily available in every second shop, whereas you can buy local jewellery, vases, handicrafts and decorative items in the other shops. There are some food stalls and sweetmeat shops too. A few shops just outside the temple sell ‘prasad’ in case you want to take some home for your near and dear ones. 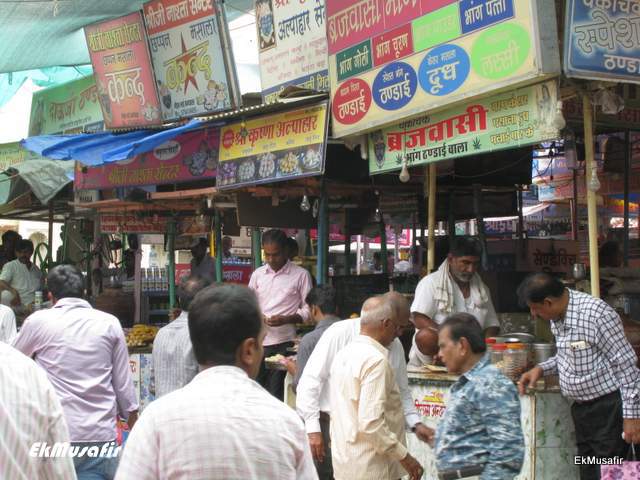 Another good place to visit at Nathdwara is the ‘Lal Bagh’ garden, about 2 km north of the main temple on the highway. This garden houses the museum where you can see the ancient chariots and other items which were used in the ceremonial processions in older times. 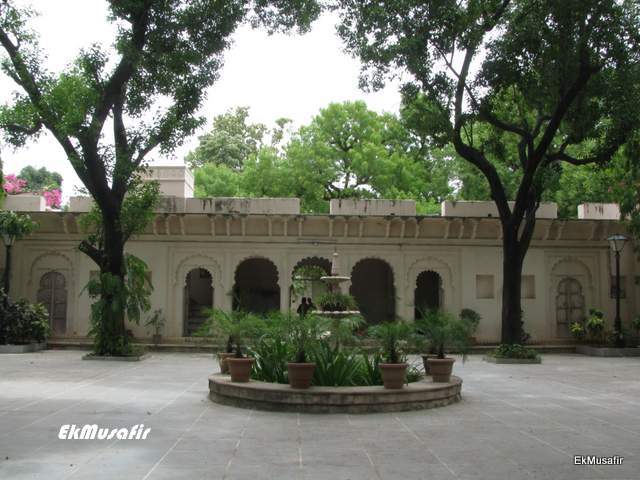 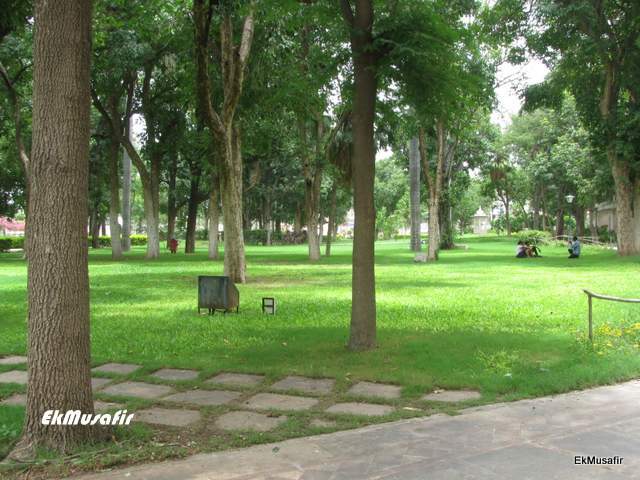 Last but not least, and if you are spending more time at Nathdwara, you can visit the ‘Gaushalas’ or cowsheds of the temple trust, which is about 5 km away from the temple. There are about 1500 cows and around 500 oxen. One cow here is known to be Shrinathji’s cow, and comes from a lineage that has served the deity for long.

We had lunch at one ‘Poonam Restaurant’ in the ‘New Cottage’ Hotel building. They served up a good unlimited Gujarati thali for Rs.160 each. There were two vegetables, two dals, dahi curry, chapati, puran poli, rice, and chaas to drink.

Enroute from Nathdwara to Udaipur one can also visit Haldighati and Eklingji Temples. We had visited the Maharana Pratap museum and Chetak Smarak at Haldighati during an earlier trip, so we skipped it this time.

We left Nathdwara at 2.15 pm and proceeded towards Udaipur on NH8. As we were entering the city we noticed this huge and colourful building on our left called ‘The Celebration Mall’. We asked Rajkumar to stop here so that we could refresh ourselves. There was ample paid parking space in the basement. 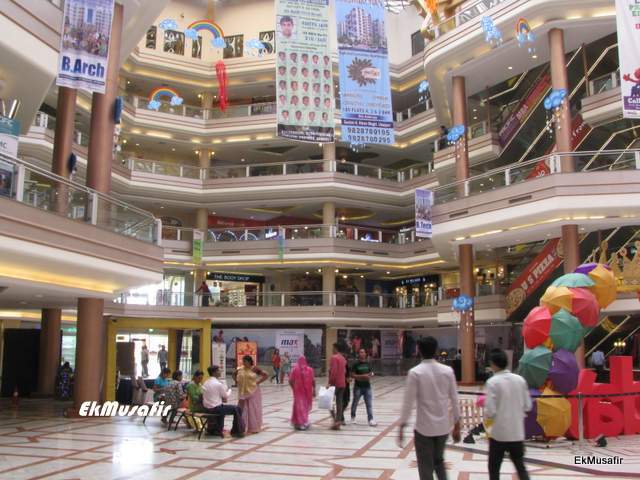 We were pleasantly surprised to see the many brightly decorated shops inside the mall. There were all kinds of shops selling clothes, shoes, jewellery, souvenirs, branded goods, restaurants, food and drink stalls and even a movie theatre (PVR). It was comparable to some of the best malls in our country.

We had a pizza, followed by ‘jamun’ ice-cream. We made good use of the washroom which was in a better condition than many we had encountered on the way, but could be better maintained.

For the local people this mall seems to be a good place to hang out and do some shopping, but for us tourists it was like an oasis in the desert where we could pause for a while, refresh and refuel ourselves, and be on the way again. 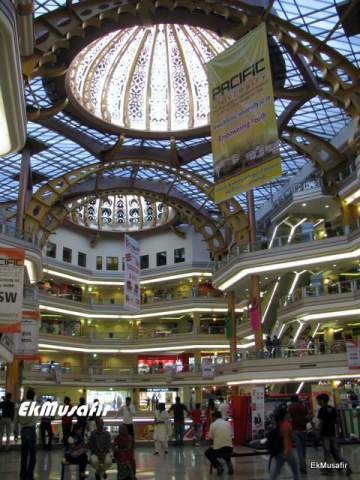 We left from Celebration Mall at 4 pm and reached Sajjan Garh, also known as the Monsoon Palace, in half an hour.

Sajjan Garh is situated on top of the highest hill peak near Udaipur, and is clearly visible from most parts of the city. It is best to visit this place in the evenings to see the city lighting up as dusk approaches. The road to the top is narrow and quite steep and winds up the forested hillsides of the Sajjan Garh Wildlife Sanctuary. There is an entry fee of Rs.130 per vehicle and Rs.20 per person. Entry timings are between 10 am to 6 pm. The gradient is too steep for auto-rickshaws, so you have to use your own transport or hire a cab. 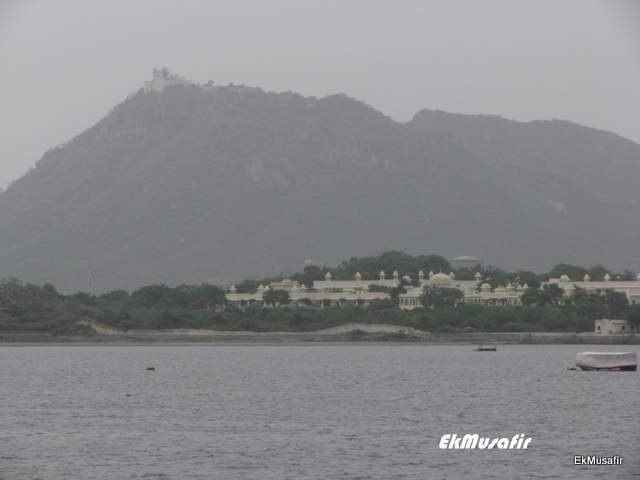 The Monsoon Palace at the top also served as a Hunting Lodge for Maharaja Sajjan Singh, and you can see many exhibits and pictures of the wildlife sanctuary inside the building. The condition of building and the display seems to be in a state of neglect, though. 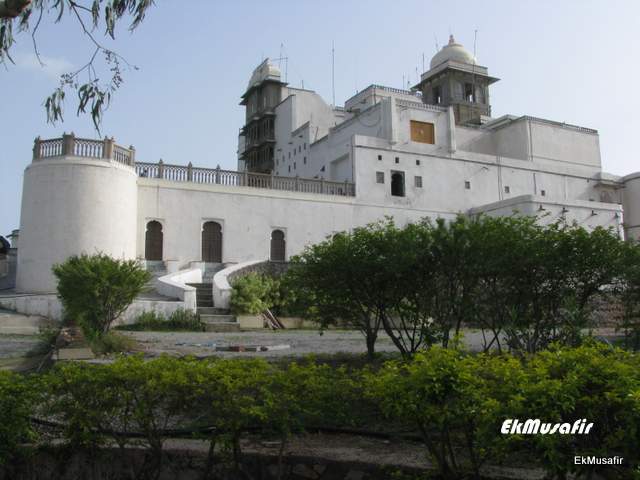 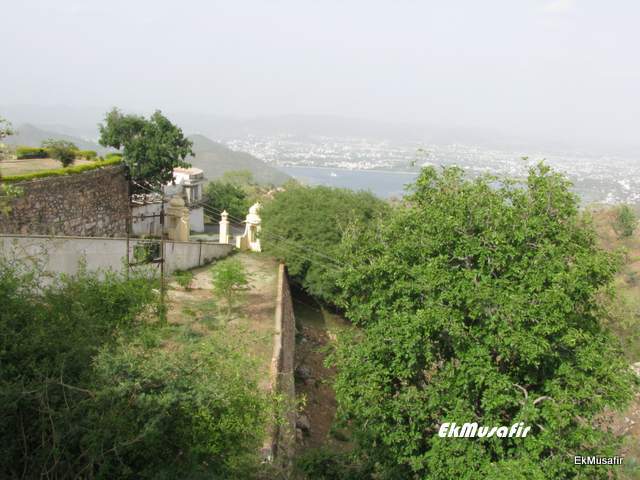 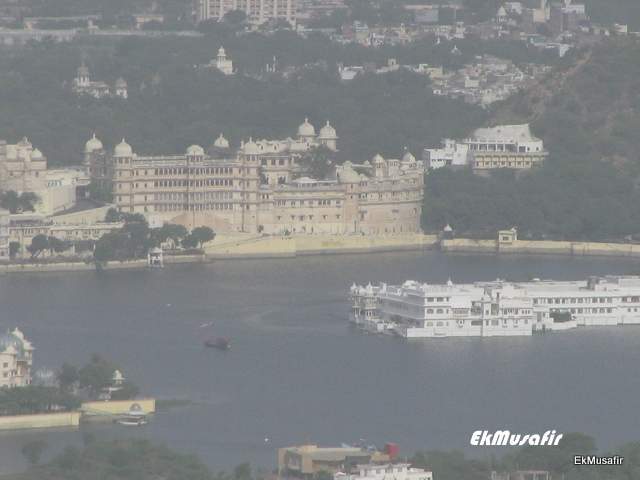 City Palace and Lake Palace as seen from Sajjan Garh.

The place is quite isolated with no restaurants or food stalls around, so carry your own picnic basket. You can spend some time in the garden and open spaces around the Palace, or walk through the clouds if you are there on a rainy day during the monsoons.

After an evening visit to Sajjan Garh we proceeded to our resort, Club Mahindra Udaipur, passing through the narrow lanes near Lake Pichola, and joining back on NH8 going towards Ahmedabad.

Club Mahindra’s resort at Udaipur is a royal retreat, resembling a Haveli, set amidst the Aravalli Hills and the National Highway No.8 (Jaipur-Ahmedabad). It is located about 9 km outside the main city of Udaipur as you drive towards Ahmedabad. It was earlier known as the ‘Paras Hill Resort’. As you enter the gates you are greeted by the soothing sight of beautiful green lawns and fountains.

Check in was quick and easy and we were allotted a room on the 2nd floor with a view of the hills and highway in front and the resort pool behind. The swimming pool is located in a quadrangle in the centre of the resort, so all the rooms have a poolside view! You can sit out in the common balcony enjoying the breeze and watching the trucks trundling by. There is also an open air sit-out on the terrace where you can gaze at the stars after dinner.

There are in house entertainment programs arranged by the resort like magic/puppet shows, Rajasthani dances and cultural activities. Pottery classes as well as spa and indoor games are also available.

All the rooms are hotel units and don’t have kitchenettes, so you have no choice but to use the resort restaurant. They do have a mini fridge and tea maker though, and the rooms are well furnished with central a/c. We enjoyed the food at the restaurant, where they serve both buffet and a la carte. Chef Ranbeer is always on the prowl to make sure that all his customers are enjoying his recipes.

We enjoyed their preparation of ‘Alu Gobi Adraki’ with ‘nan’ and ‘lachha paratha’ at the restaurant.

After a tiring day of travel and sight seeing in Mewar, we hit the sack early to wake up fresh for another day of exploring tomorrow.

Tomorrow we would be visiting the beautiful City of Lakes and Palaces, Udaipur!

It is Canada’s second-largest city, but feels European. The most widely spoken language here is French. Narrow streets meander through some beautiful marvels of…