Our journey to the Ganesh Top began at around 12.30PM from Wahbal Top. It was a steep climb of 1000 feet from there and the distance to cover was only 2 Kms. We saw a group of pilgrims returning and spoke to them. They could not make it to the cave because the much slippery snowy routes came on their way and they got scared trekking over the same. It might also be that they were not sufficiently prepared for trekking on such conditions or to hire pony for rest of the route. But those returning from the Holy Cave were encouraging the pilgrims for going ahead taking the name of Lord Shiva and that the Lord would certainly help each of them to reach the holy cave.

“Keep faith on Bhole Shankar (another name of Lord Shiva), he would take you there”, said a lady pilgrim. She was returning from the cave and somehow balancing on the horseback, but her happiness knew no bounds for she had the Darshan of Ice-Lingam.

We were passing through the snowy mountains and riding the horse on the slippery snowy roads. The riding, though not scary was not safe even. But there was no going back as we had firm faith upon Lord Shiva that he would take us there. 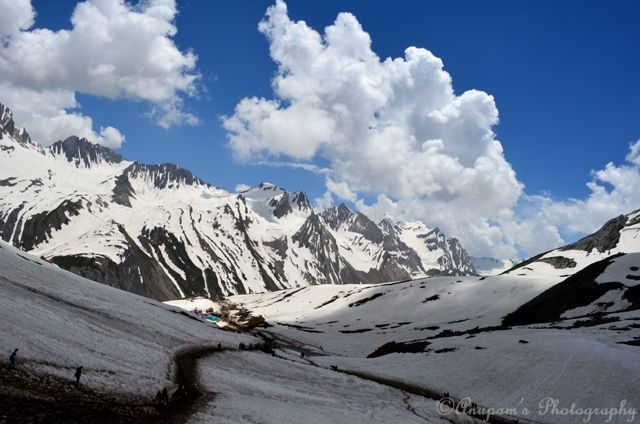 We saw pilgrims tired and exhausted, moving slowly resting after every step or two and painfully looking at the steep ascent of Ganesh Top, thinking might be about the climbing left, some were searching the shortest route and other going slow but steady. The pain was lesser for us except sore back due to long horse riding. Suddenly, we saw a U shape mountain just before the Ganesh Top, standing tall and high, looking at the pilgrims as if it was a gate to heaven. Slowly we climbed up to the highest point of Amarnath Yatra route, the Mahagunus Top or the Ganesh Top at an altitude of 14500 ft above the sea level. The Army had a post there too and was at the services of pilgrims. 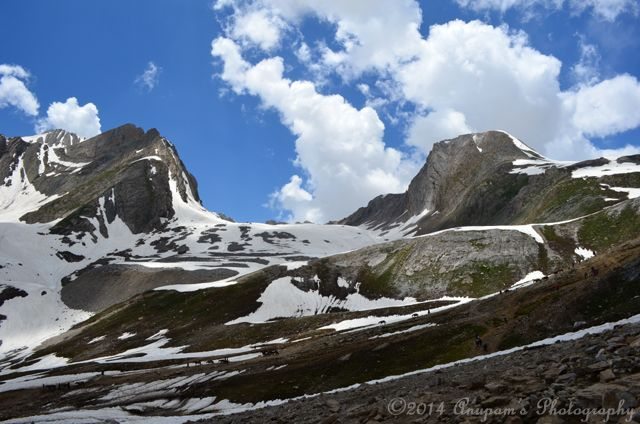 U shape Mountain, Gate to Heaven

It was now a gradual descent to the valley Poshpatri. En-route, it was snow and snow all over! And to whichever direction we looked we saw snow only. I was experiencing the journey through the ice land. It was like a dream that came true and I found myself in that dreamland. The entire place was untouched by civilization and was much a treat for the eyes. All the roads as if were leading to the heaven and holiness of the journey felt again. 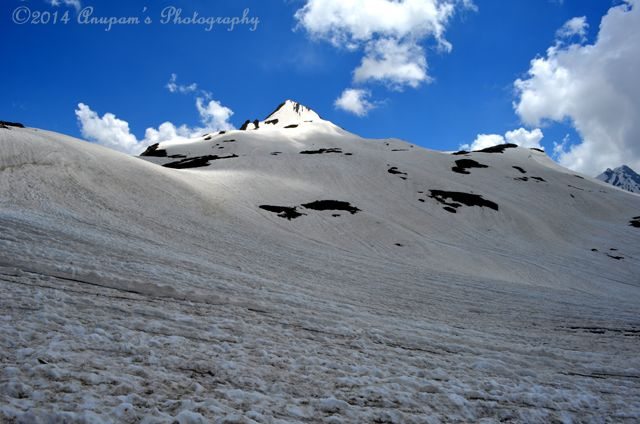 In the Snow Land 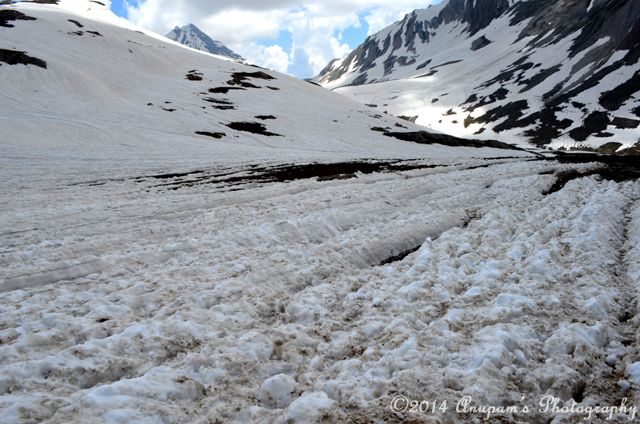 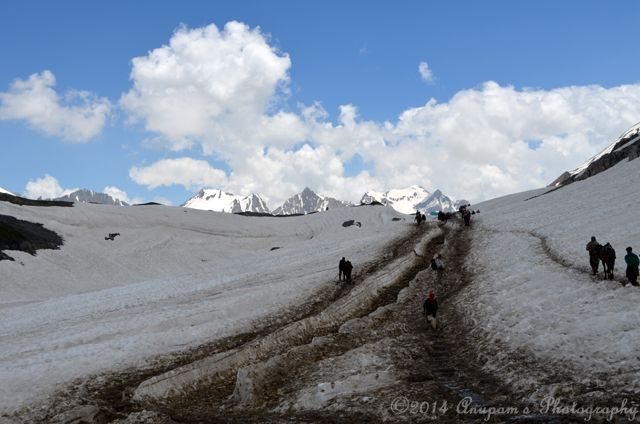 Road to the Heaven

But the toughest road began soon as no specific track was now visible. Our horsemen were guiding the horses cautiously on those snow melted muddy roads. The distance was not much, may be a kilometer or so, but we all wanted it to end soon. However any rush would have doubled the danger and hence the moves were taken judging the track carefully. 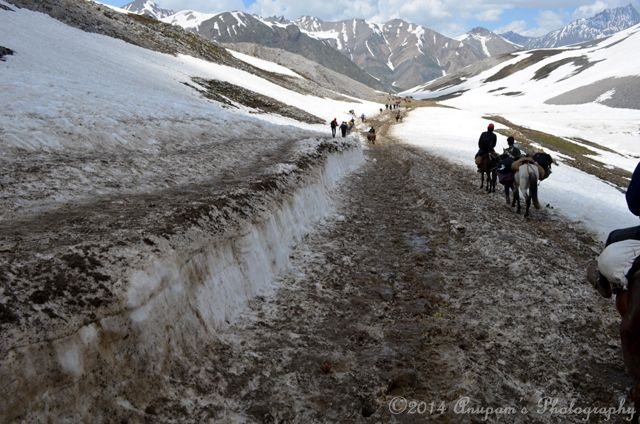 The heavy snows everywhere were making it difficult for the trekkers too. Every now and then they were skidding, standing up again and moving ahead with more confidence and faith on Lord Shiva. Many of them were all drenched in muddy snows which melted on the roads.

Only Road for trekker as well as horse 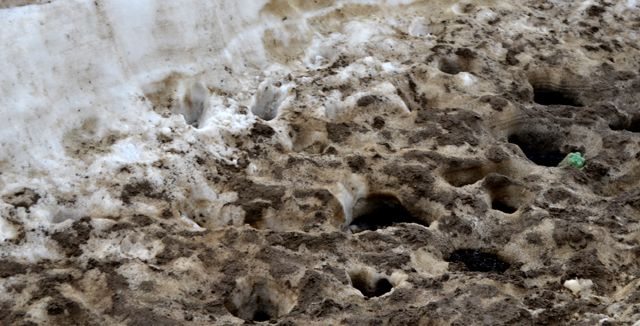 But where road ends there journey begins. It was the journey of faith that every pilgrims were undertaking. The geographical journey with physical endurance and mental stamina was only a symbol of a much meaningful inner journey of faith, the faith to touch the feet of Lord Shiva.

On the way to Poshpatri

O Shiva! O great Lord! Bless your devotees to reach Thy feet. It was the prayer perhaps coming out from everyone’s heart and might have been heard too. Thus we moved unhurt on those horrifying track for an hour or so and at last reached the valley Poshpatri.

We reached Poshpathri and saw the Bhandara of “Shiv Shewak Delhi”, the biggest Bhandara on that route, bustling with people and music elevating the moods of pilgrims. They had the kind of arrangements of foods and sweets that I must say it were a star facility in Himalayas! But we decided to go without food and continued our journey to Panchtarni.

Tents on the Bank of Panchtarni River

The route to Panchtarni from Poshpatri was not much eventful and it was mainly going downhill. En-route, we were stopped before a wooden bridge under which a stream was flowing towards Panchtarni from the glaciers above. That narrow bridge could bear only one ways traffic, so we waited for a while to get clearance and eventually we crossed over. The road was now almost on a plain land that led to Panchtarni and the distance was not more than 2kms. As we reached near Panchtarni we saw flat river bed spread over a vast plain land with streams split in five parts. 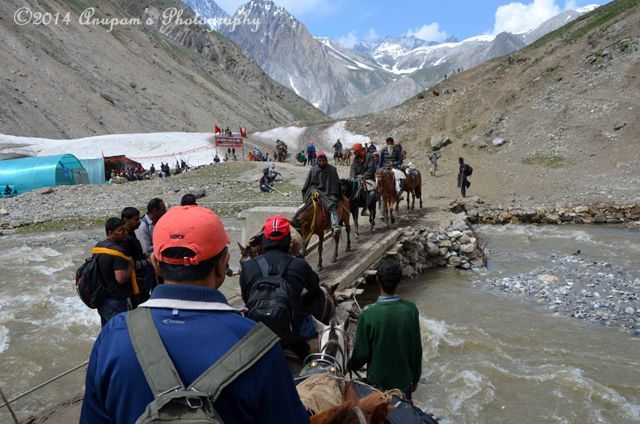 En-route, a single way Traffic over a stream 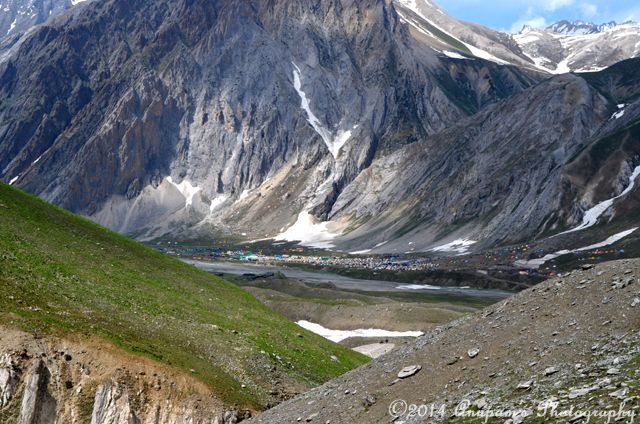 There is a spiritual significance of this land too. It is believed that Lord Shiva left behind five elements namely, earth, water, air, fire and sky at this place, symbolic of sacrificing the world. Belief is also that the five streams of the river originated from Lord Shiva’s matted locks (Jata).

“Welcome to Panchtarni”, we saw the gate welcoming pilgrims and reached there soon. Finally we were taken down from the horseback for the day. The horses were not allowed to enter into the camping area and hence were left free at the place where they would find their companions. 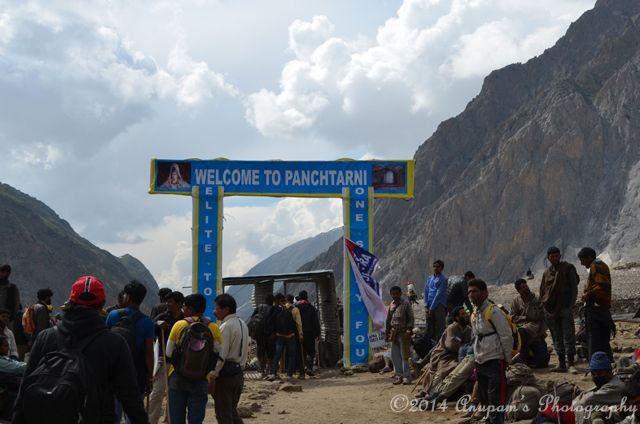 Our horses with their companion! Difficult to find ours

And we moved on foot to find a camp, to have rest for the night, get up early in the morning and set off the journey again.

Journey to the Holy Cave continues……..

When you come to Rewalsar, you cannot be untouched by the spiritual vibrations being reflected in every activity in this sacred land, be it the chirpings of the birds, soulful chantings from the monastery or temple or Gurubani from the Gurudwara, people feeding hungry souls in the lake, pondering monkeys over the trees, Buddhist prayer flags swirling in the air, swimming ducks in the lake, meditating and contemplating holy people on bank of the lake, the green and serene water of the lake, monks running the prayer-wheels, beautiful surrounding hills, finely ornated colourful monasteries with young monks playing around, burning oil lamps, ringing bells, cows and dogs resting near the lake, swaying trees, smiling flowers etc, whatever passes through your eyes gives you a sort of positive vibrations.