So for a re-cap: We reached Holy Cave at around 8:30 AM and after having Darshan, We came down from the cave. We took some breakfast and hot Masala tea from the Bhandara and started return journey.

When we reached at the shop where we have kept our bags and mobile phones we met our rest of group members. They were proceeding towards holy cave. As already fixed, we asked them to reach at Barfani Sewa Mandal Bhandara at Domel, (Baltal) in the evening where we will be waiting for them. It was 9:30 AM and by this time rush had increased at Holy cave because people had started reaching there from Baltal side.  After some rest, we took our bags and moved towards Baltal. 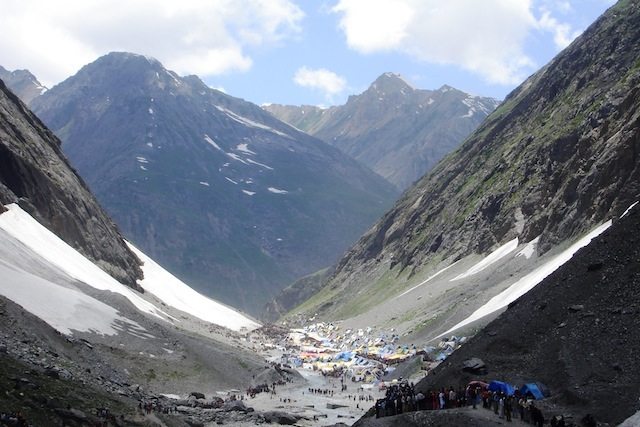 From Holy Cave side

There are two tracks towards Baltal from Holy Cave. One is old, through Sangam Valley. For this you have to reach at the bottom of the mountain, the Sangam Valley, so it has steep descend and ascend The other is new, shortcut but little dangerous. This is made through the mountain which is opposite to Valley .This does not require to climb down, so no steep descend or ascend, but only gradual climb. This track is known as Kali track because at one place statue of Maa kali is naturally formed on one hill.

We opted for new track and slowly and steadily keep walking. Journey till Domel was uneventful and we reached at Domel at around 3 PM. Domel is 2 KM before Main Baltal and from Domel onwards there are endless Bhandaras till Baltal. We went to Barfani Sewa Mandal Bhandara which is at Domel and met the Pardhan Ji. We are member of this Bhandara since 1999. We introduce our self and they gave us one tent for the whole group. We were asked to have lunch first and then rest and we did the same. After some rest we took bath and refreshed ourselves. By the evening rest of group members reached there.

At 7:30 PM dinner was started after the Arti. As we have taken enough rest so we offered some sewa at Langar. When rush decreased we took dinner and went for sleep.

Any information or discussion on Amarnath Yatra is incomplete without mentioning the role of Langars or Bhandara’s. As the democracy has four pillars so has the Amarnath Yatra. These are Shri Amarnath Shrine Board, Security forces, Pilgrims and Langar Organisations. You cannot imagine the Yatra without langars. They Render free food services to the  pilgrims  during  Shri  Amarnath Yatra, Provide  night  shelter  services  to the pilgrims,  distribute   blankets and   first aid  and  primary  medical  service to the  Yatris. They assist Shri Amarnath Shrine Board (SASB) in smooth conduct of Shri Amarnath Yatra every year. They also generate awareness amongst the Yatris regarding registration, dos and don’ts amongst the Yatris in order to avoid any miss-happening during the Yatra.

There are around 150 langars serving the pilgrims. You need not to worry about food after reaching Jammu and further onwards for the whole Yatra. These are scattered at different places on Yatra paths. A summary of number of Langar/ Bhandara at different places is as under:

Out of these 150 Langars, nearly half of them are from Punjab, 30 from Delhi, 20 from Haryana and rest from rest of India.”

Next morning we wake up late as all of us were very tired. We had completed 46 KM of track in last three days and today there was no tracking so no one was in hurry. We escaped bath here as we decided to take bath in Sind River near Kangan city. After taking tea and some snacks we quickly became ready for rest of 2KM walking till Baltal. The track is simple on the planes so we felt no problem. We reached at parking place and searched for our vehicle and soon we found it. We repacked our bags, put it on the rooftop carrier and asked driver to start. From Baltal onwards till Ganderbal, the Sind River flows besides (mainly on the left side) the NH 1D, a National Highway which connects Ladakh and the Kashmir Valley. The milky green water of the Sind River produced many beautiful landscapes in the Sind Valley 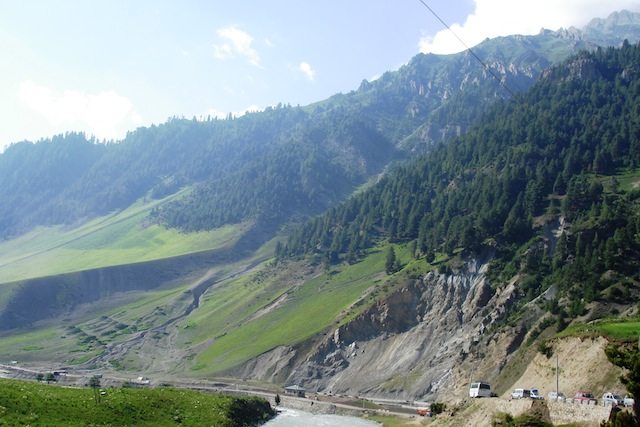 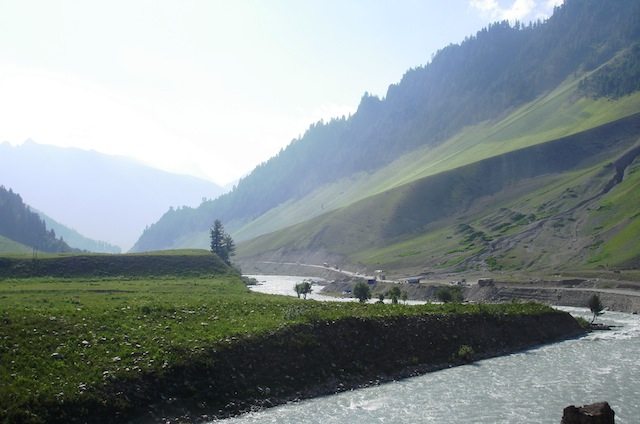 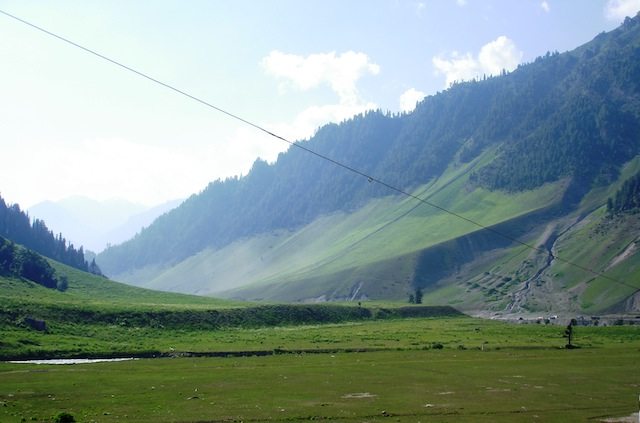 “The Sind River or the Sindh is a river in the Ganderbal district of Jammu and Kashmir state of India. It is a major tributary of the Jhelum River and is 108 kilometers long. The source of the river lies in Machoi Glacier at an elevation of 4800 meters, east of Amarnath temple south of Zojila pass. It flows through Panchtarni (a camping site of Amarnath Yatra) southwards up to Domail where it joins a tributary which doubles its flow from Kolhoi Glacier. It flows mostly westwards along with NH 1D and is fed by many glacial streams on its way to Ganderbal town.” 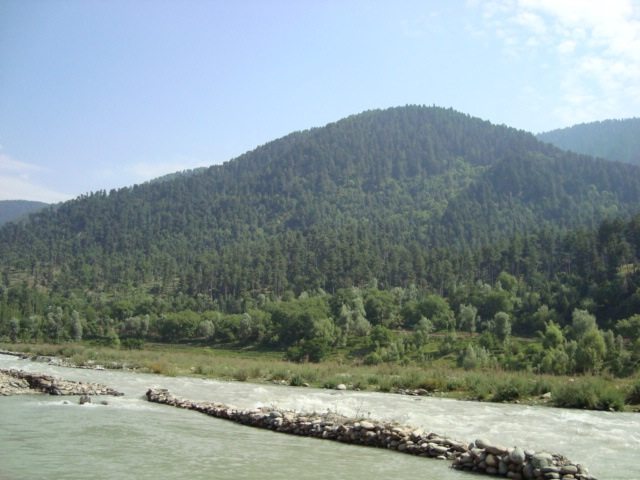 After a short journey of 30 minutes we reached Sonamarg. This world-famous hill station is situated 80 kilometers (50 mi) from Srinagar, 15 KM from Baltal and located on the banks of Sindh River. It lies at an altitude of 2800 meters above sea. The beauty of Sonamarg forces the tourists to stop there. It seems that someone has laid green carpets on mountains. Once a great tourist puller and favorite place for shooting of Bollywood films, Sonamarg is perhaps the best health resort in the country. Sonamarg also hosts the International Championships of Rafting on River Sindh. It presents a glamorous look due to its alpine meadows, snow-clad mountains, and healthy climate. Sonamarg skirts Sindh river and torrential flow of water in this river enriches its awesome beauty. Besides several hotels in private sector have come up here and these hotels provide modern facilities to their guests. A number of treks in this region also begin from Sonamarg. Sonamarg has no permanent settlement and is inaccessible during winter due to heavy snowfall and avalanches.

After spending one good hour at Sonamarg we proceed towards Srinagar. Now all of us were eagerly waiting for a bath in Sind River near Kangan, where the location is perfect for bathing. Many shops and restaurants have come up on the bank of Sind near Kangan. It took us around two hour to reach there. We reached to predestined place and parked the vehicle. Soon we were ready to bath in chilled and high flowing water of Sind. Water was very cold and due to it some were having hesitation to enter it but other pulled them into the water. When we were busy in bathing and masti, driver was busy in clicking our photos. 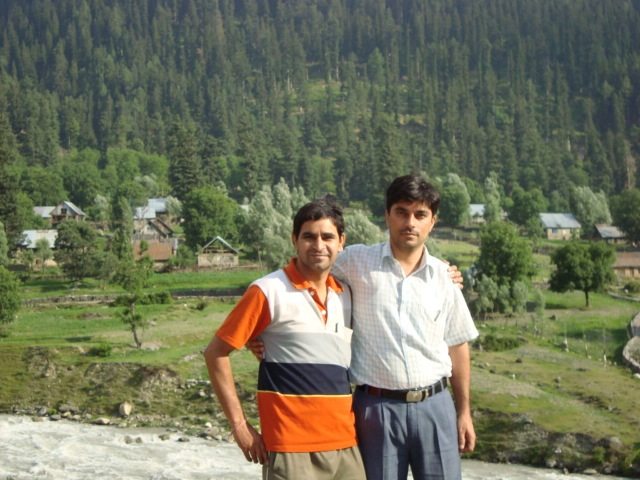 I and Naresh Saroha 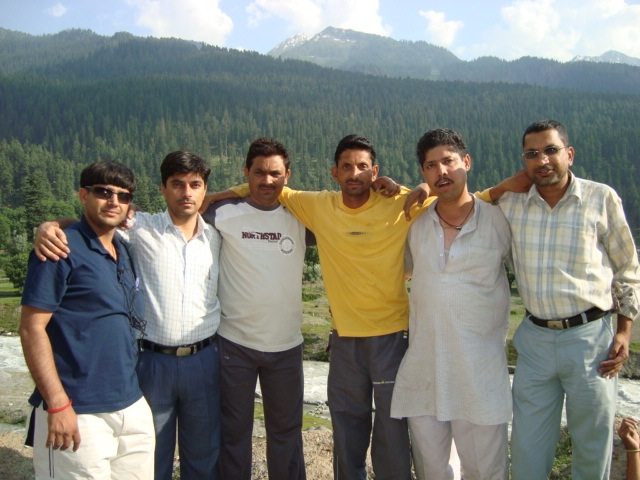 We enjoyed a lot there and after bath we took tea and snacks from a shop and then again moved towards Srinagar. In one hour we reached Srinagar. We went direct to our company rest house near Lal Chowk where two rooms were already booked for us. We kept our belongings there and asked caretaker to make Tea. After taking tea we told caretaker that we are going for outing and will take dinner at rest house only so prepare the Dinner before our return. Although we have seen all important tourist places in Srinagar earlier yet due to 2-3 new members in the group decided to visit Mugal Garden (Nishat Bag) and Dal Lake. We reached Mugal Garden and parked our vehicle opposite the Nishat bag and bought tickets (Rs 10 for adults and Rs 5 for children) for entrance.

“Nishat Bagh, meaning the ‘The garden of joy’ located on the eastern side of the Dal Lake is a marvelous garden designed by Asaf Khan, Nur Jahan’s brother. Laid out in 1633 it is among the largest of the Mughal Gardens. This garden placed on the banks of the beautiful Dal Lake in the backdrop of the amazing the Zabarwan hills, is complete with fountains, flower beds and impressive lawns. Tourists can enjoy magnificent views of the Dal Lake from the garden. (Source: Wikipedia)”

We spend a good time in Nishat Bag. Around 7:30 PM we were asked by the care takers to leave the Garden as it was closing time. We came out of the Garden and moved toward Dal Lake. 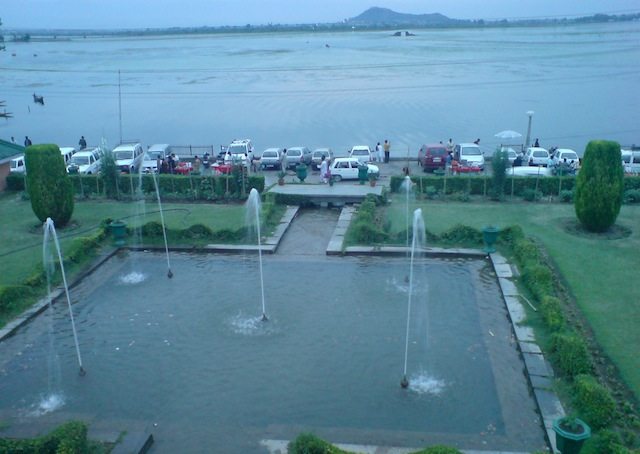 Picture of Dal from Nishat Bag 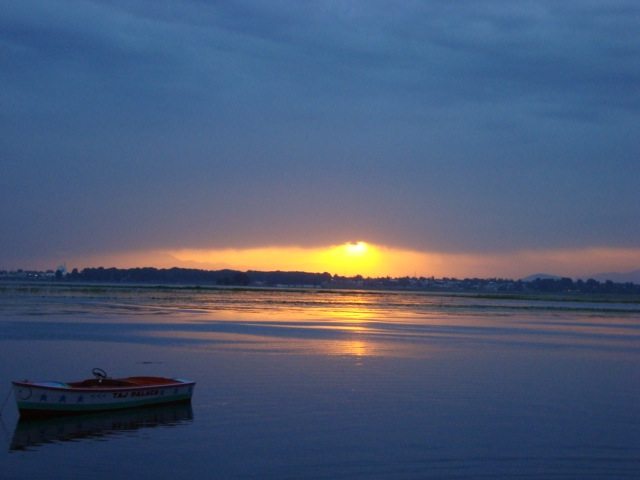 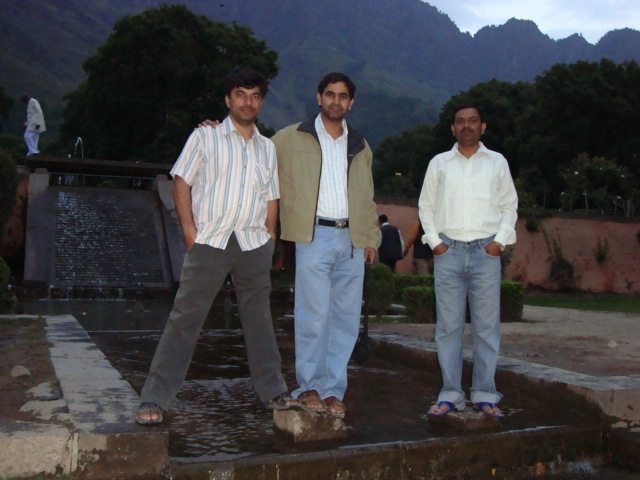 There are 3-4 paid parking areas opposite Dal Lake. We parked our vehicle in one of them and moved towards Lake. Dal Lake was looking very beautiful at night. Reflection of hotels and house boats lights were adding glamour to it. We hired two Shikara for boating @ Rs. 150 for one hour. They started slowly and then moved into inner circle of lake and passed through floating market, floating post office etc. In Dal local people have set shops on boats selling all type of snacks, fruits, baked corns, cold drinks and even Soda !!!. All items of enjoyment at your service. You need not to go to them; they will come to your boat (Shikara) for selling these item. Enjoy of boating in Dal Lake is only after evening when it is filled with tourists enjoying on Shikaras. After boating we moved to rest house, took dinner and felt asleep. 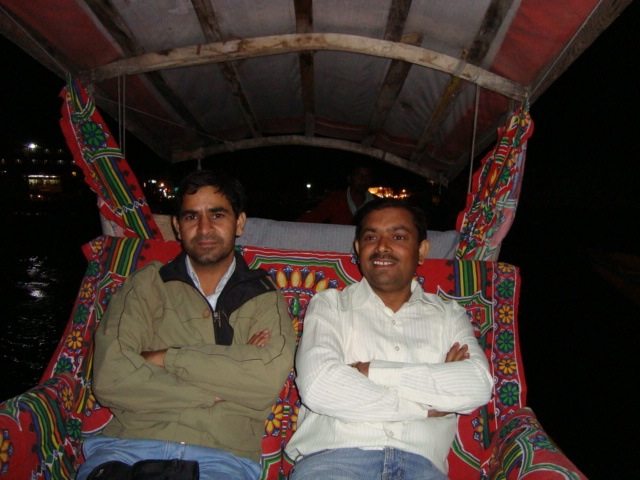 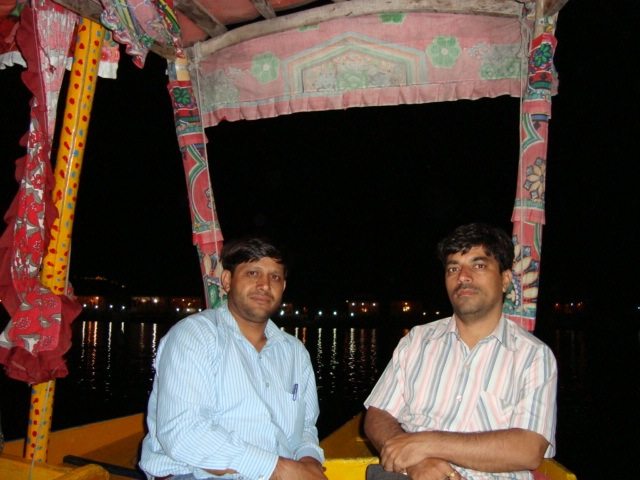 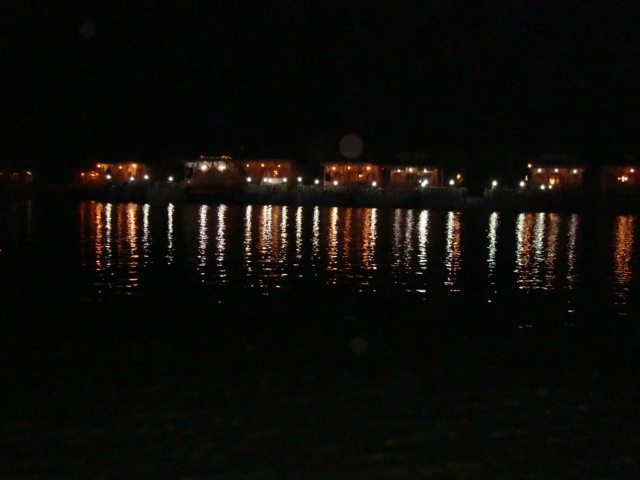 Reflections of Houseboats in Dal 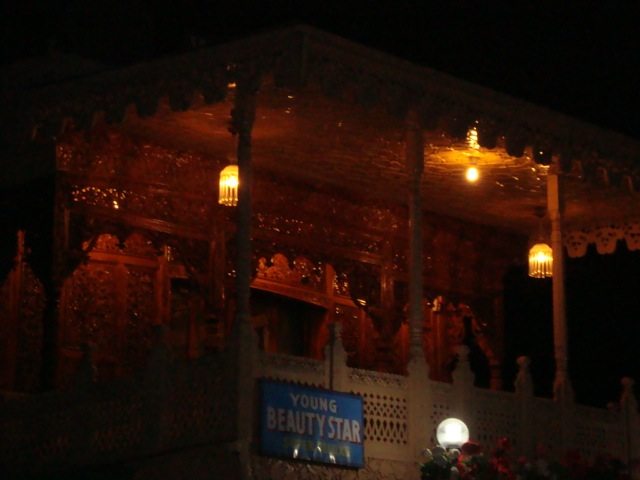 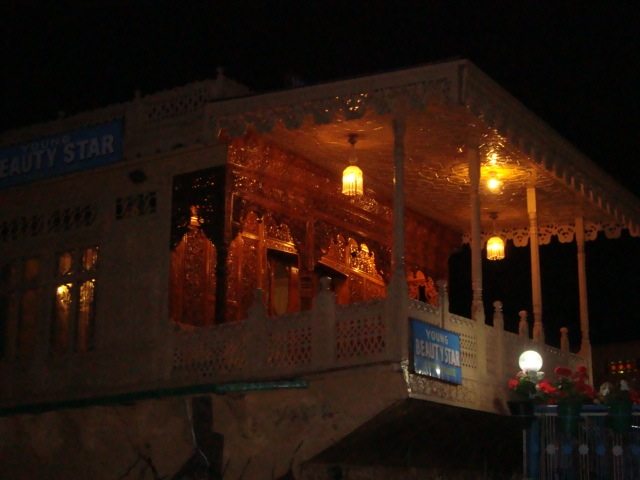 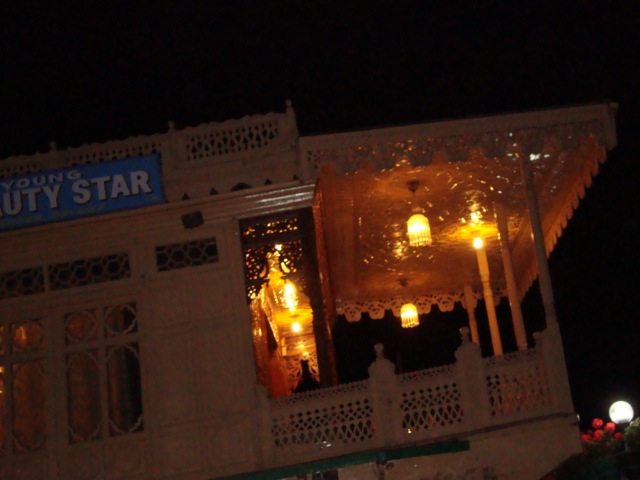 Next morning, after getting ready, taking breakfast and clearing all dues, we leave the Srinagar around 9 o’clock. We stopped at Qazigund for tea break. We also purchased dry fruits and some bats from here. By the evening we reached Udhampur and took Samba road and reached direct to Samba. Around 10 PM we reached Baba Barfani Sewa Mandal at Dayalachak. We were fully tired after a long hilly journey so took some dinner quickly and slept soon. Next morning we left for Ambala and by 3 PM we reached our Home.

One of the major highlights of our visit to San francisco was the Alcatraz Island (1934 to 1963)….yes you guessed it right..the most famous…