In the winter of the early months of 2017, we, two friends, decided to visit Sukharia, the land which boasts of several architectural marvels built by the prestigious members of the Mitra Mustafi family. Early in the morning , we boarded a train (Katwa local) from Howrah Railway station at around 8:30 A.M.

After a peaceful journey of around 2 hours , we got down at Somra Bazar railway station. We finished a sumptuous breakfast in a local eatery near the railway station. We bargained with a local TOTO ( Battery operated autorickshaw ) driver to show us the important places around and thus started our exciting Ghumakkari.

The village of Sukharia is associated with the Mitra Mustafi family…

…whose other settlements were in the villages of Ula Birnagar and Sripur. The Mitra Mustafi family is sometimes called the family of Dewans as most of the family members served in different positions in the revenue departments during the rule of the monarchy.

The earliest root of the Mitra Mustafi family can be assigned to Kalidas Mitra who was one of the five Kayasthas who immigrated from Kanauj to Bengal. Counting from Kalidas Mitra, the 19th generation successor is the famous zamindar from Ula Birnagar, Rameswar Mitra.

Quoting from the District Handbook of Bengal, Volume 12

“Rameswar Mitra visited Delhi at the time of Aurangzeb (1618-1707) and said to have much impressed the 6th Mughal Emperor with his scholarship work in the Accounts Department, in which he so distinguished himself and did such good work, that the Emperor awarded him the title Mustauphi (a royal title) and presented him with a golden palm (panja) (Royal seal, impression of entire palm)”. Thus the surname of Mitra Mustafi originated which should not be confused with the Muslim surname of Mustafa.

The golden palm received from Aurangazeb was used as a family logo for the Mitra Mustafis. Rameshwar Mitra Mustafi’s son Anantaram left Ula Birnagar and settled in Sukharia.

History of the Mitra Mustafi Family 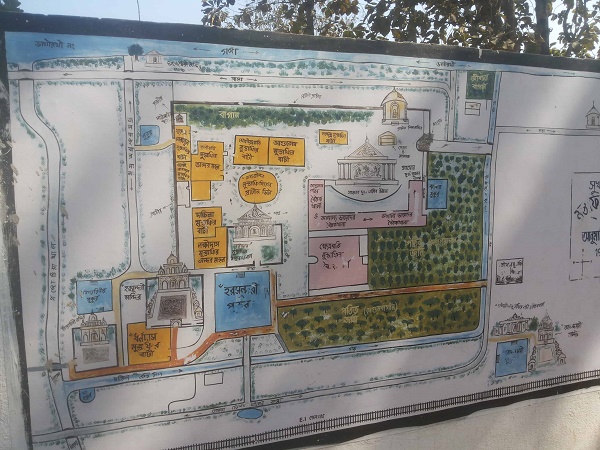 Map of the tourist spots of Sukharia Village

In this temple village, the most magnificent of the lot is the 25 pinnacled Ananda Bhairavi temple . Apart from this temple in Sukharia , there are four more samples of this kind of temple in the whole of Bengal – three in Kalna of Burdwan district and one in Sonamukhi of Bankura district. This temple was built by Bireswar Mustafi. During the massive earthquake of 1897 , the top most five pinnacles were destroyed which were later reconstructed.

Along the main temple , twelve more temples are located in rows – six on each side.  Ten of these temples are of aatchala style and two of them are of pancharatna style.  One of those pancharatna temple is dedicated to Lord Ganesha and the remaining eleven belongs to Lord Shiva. Just beside the temple complex , a huge lake is also present which gives a magnificent mirror image of the entire temple complex. 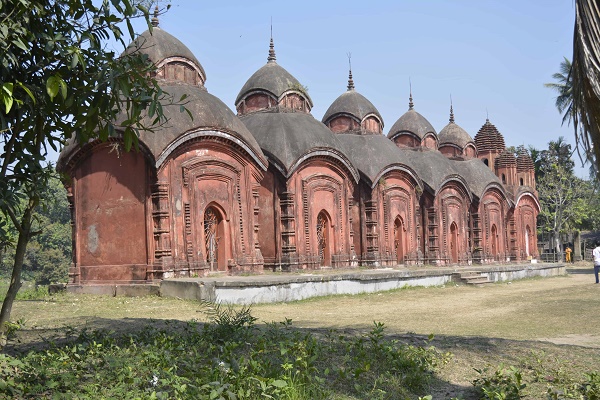 We were lucky enough that the local priest ( who was descendant of the original priest ) was performing the morning rituals during that time. We took part in the puja and chatted with him for quite some time. He showed interest and agreed to guide us through the entire village. The next pit stop was RadhaKunja , a huge mansion which is currently a popular shooting spot. 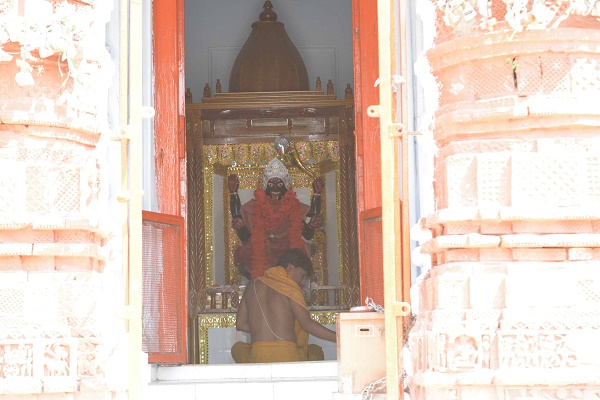 The priest performing the puja

Just next to the Ananda Bhairavi temple , there stands Radhakunja , a palace like mansion built by Ramjiban  , the great grandson of Sambhuram Mitra Mustafi. Currently the mansion is in ruins. Once it was the centre stage of lots of wealth and grandeur as is evident from the huge columns and stucco on its walls. The bengali movie “Akaler Sandhane” directed by Mrinal Sen was shot in the premises of Radhakunja and was graced by quality actors like Dhritiman Chatterjee. The mansion was huge and we were awestruck by its dimension.

The grand mansion in ruins

Walking for a few metres , one come across another temple complex on the banks of another lake. The main temple out here is the Navaratna styled temple of Harasundari Kali along with fourteen other  temples distributed equally in rows on each side. Of them twelve are aatchala styled Shiva temples and two pancharatna styled temples. Dewan Ramnidhi Mustafi constructed these temples in 1813 A.D.

The entire temple complex was renovated in 1968 and another round of renovation is happening currently under the supervision of the descendents of Ramnidhi Mitra Mustafi. Currently the Mitra Mustafis run an orphanage by the side of this temple complex. This complex is well maintained and renovation work was going on during our visit. 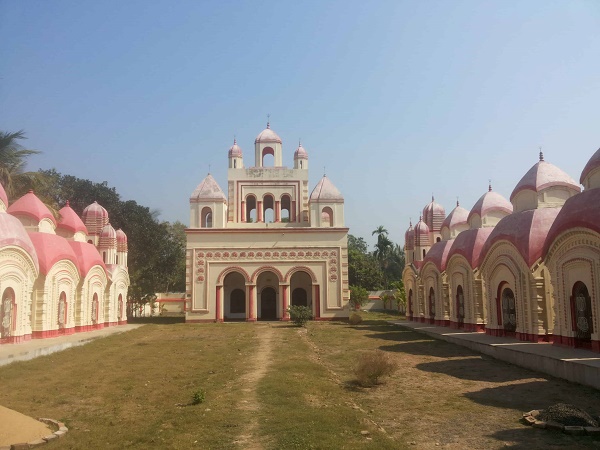 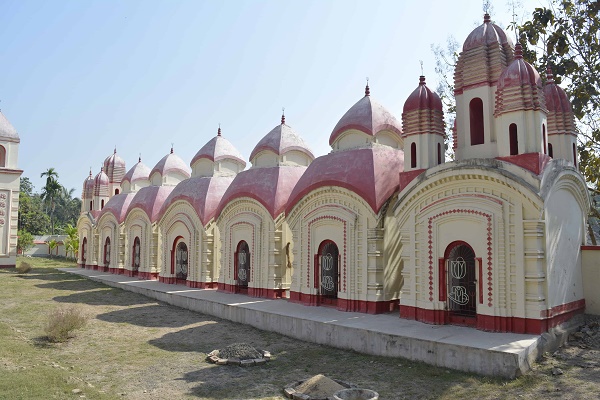 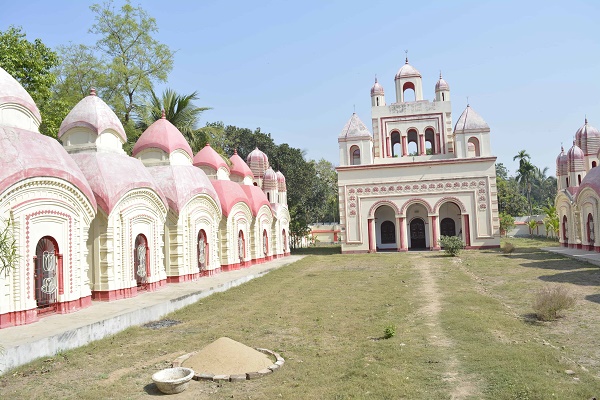 Just few metres walking distance from this temple complex lies the Nistarini Kali temple.It is a huge few feet tall south facing navaratna styled temple constructed by Kashigati Mustafi in 1847 A.D. Currently restoration work is going on which is a good sign. We talked with the caretaker here and took some snaps. 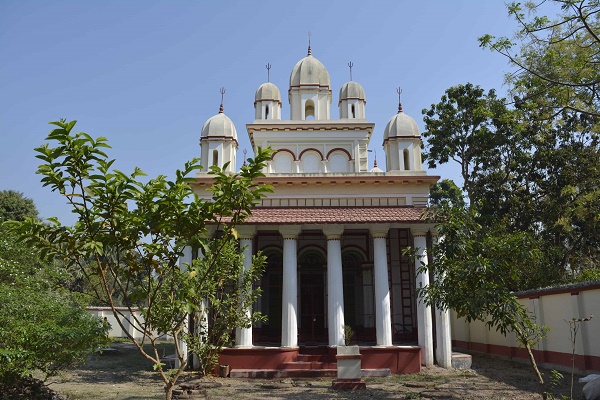 Situated another few metres from Nistarini Kali temple is the oldest temple in Sukharia – the Sidhheswari Kali temple. Once the river Ganges used to flow past the temple , but currently the river has resided its course to a huge extent and what lies next to the temple are lush green field. Although it has a rich past and heritage , nothing is evident from its current condition , the reason being unplanned renovation and its flat roofed structure which is deviating from the tradition temple architecture of Bengal. We relaxed by the huge banyan tree next to the temple

The Puja Dalan of Lakshmidas Mitra Mustafi can also be viewed walking along the banks of the pond adjacent to  the Harasundari temple complex. The huge European styled columns and stucco works awes us still today. The artwork on the columns and walls were just great and we kept on looking at them and studying them. 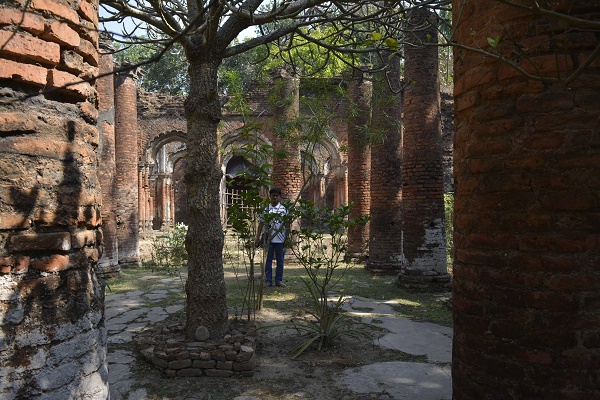 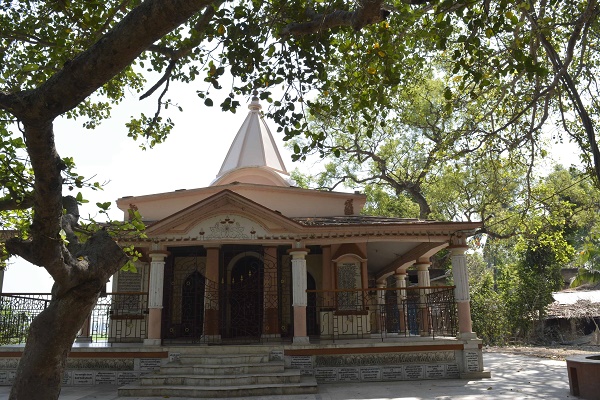 Apart from this several other old Shiva temples, Ras Manchas and Dol Manchas could not withstand the test of time and have been crumbled to dust unfortunately.It was a great day and we enjoyed each and every part of it to the fullest. Now it was time to return. At around 4 pm in the evening, we caught a return Katwa – Howrah local from Somrabazar station and reached Kolkata in the evening hours.

Catch a train from Kolkata towards Katwa ( Howrah- Katwa local or Sealdah – Katwa local ) and get down at Somra Bazar Railway station. The village of Sukharia is adjacent to Somra Bazar and can be reached on foot or cycle rickshaw.

Sukharia – the land of the Mitra Mustafis was last modified: August 22nd, 2022 by tirtha22

It was 4.30 AM and hot tea was waiting for us. By the time we left Pahalgam it was 5.30 AM. Katra is a good 280 KMs away. We stopped around 8.30 AM for breakfast. A warm welcome was given to the hot paranthas. It is a shame that we did not get to taste the popular local “Rajma Chawal” during our trip.