The last day of our Karnataka trip. We vacted our hotel room at Chikmagalur and after one final sumptuous breakfast at Town Canteen, were off to Horanadu Annapoorneshwari temple, 95 kms away. From Chikmagalur there are two routes to Horanadu. One can either take the Chikmagalur-Mangalore road and reach Kottigehara town and turn right from there to reach Horanadu. Or the alternative route is via Balehonnur, from where one can go south to reach Kalasa and Horanadu temples. Both are almost the same distance.

On the suggestion of the people at the lodge, we took the latter route and it turned out to be a rewarding decision. The road to Balehonnur passes through numerous coffee estates, lush paddy fields and spice plantations. Although the road condition at some stretches were horrible, the views more than made up for that.

The first halt as we reached the outskirts of Balehonnur, was this cute little coffee shop. Aptly named Badra Stop Coffee Shop, the thatched roofs and enchanting location of the shop will put the brakes on any passing vehicle. Steaming hot cup of coffee on a nippy winter morning tasted divine at the shop. Tasty Malnad-style breakfast is also provided here 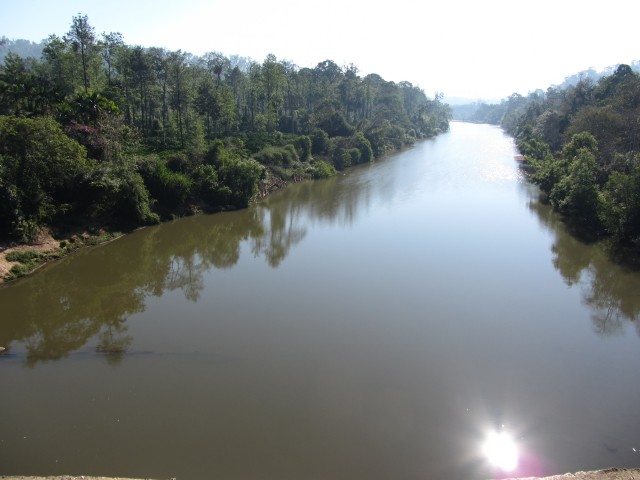 River Bhadra flowing sernely at Balehonnur under the old bridge

Balehonnur is a picturesque little town located on the banks of the Bhadra river and is dominated by coffee estates and spice plantations. It receives copious rainfall during monsoons. It is a major junction on the routes towards Chikmagalur, Sringeri,Shimoga and Kudremukh. From Balehonnur we proceeded towards Horanadu temple passing through more dense vegetation and reached the temple around 11 am.

The first impression which strikes you on reaching Horanadu Annapoorneshwari temple is how green and densely wooded the surroundings are. The temple is encircled on all sides by the green forests and the natural beauty of the majestic Western Ghats. It is as though a clearing has been made in the dense forests and a temple has been built there. It is once again re-enforced my wish to visit these regions at the tail end of the monsoon season braving the horrendous roads, when the scenery will be stunning.

A view of the lush green surroundings from the temple compound

green cover on all sides of the temple 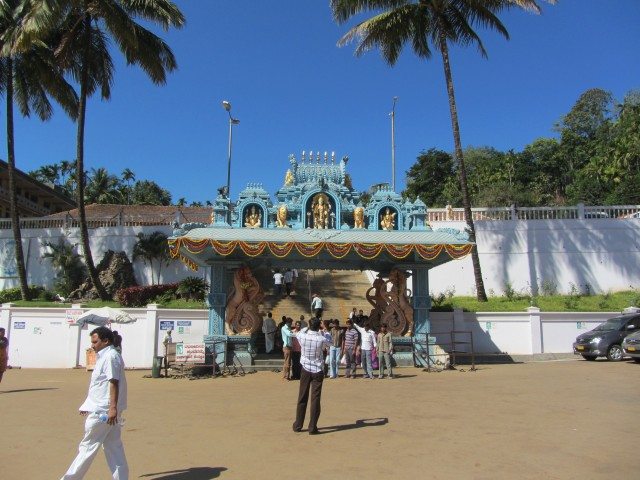 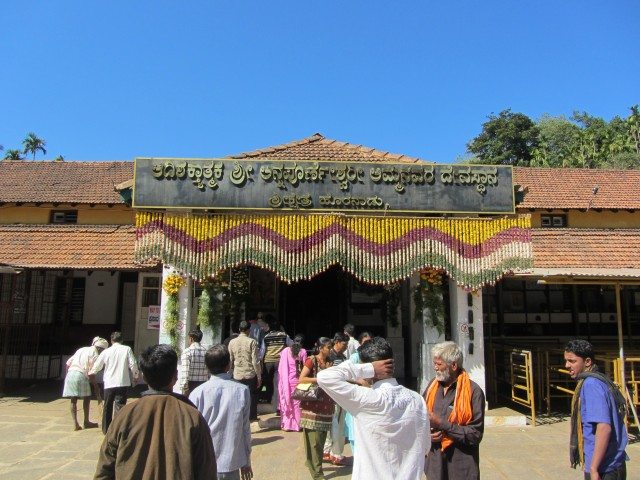 At the entrance to the sanctum of the temple

The main deity of Horanadu temple is Goddess Annapoorneshwari. The image of the Goddess stands on a pedestal with Shanku, Chakra, Sri Chakra and Devi Gayathri in her four hands. The name Annapoorneshwari as one can easily guess means “goddess who feeds one and all”. Every visitor to this temple, irrespective of their language, caste or creed is provided with a three course meal inclusive of a desert. There is a belief in these parts that if a person visits the Annapoorneshwari temple once in his lifetime and has food at the temple, he would never starve for food in his life. Along with the food, free shelter is provided to pilgrims inside the temple premises if they happen to stay overnight.

As there wasn’t a large crowd at the temple, we were able to have a very satisfying darhsan twice. Then me along with my wife, participated in the Seva of donating rice to the Annadana of the temple. There are various other sevas at the temple by which pilgrims can make offerings to Goddess Annapoorneshwari. One distinct feature of this temple is the cleanliness maintained inside the temple premises and we saw many devotees meditating peacefully in solitude inside the temple. Since, there was still time for the free meals provided by the temple(starting around 12.30 pm) we went for some souvenir shopping 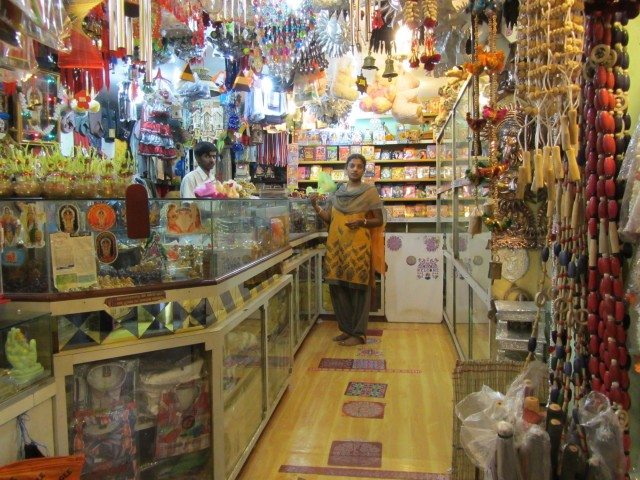 Soon, we joined the queue which had started to build up for the Annadana. And what a feast it turned out to be ! In a spankily clean dining hall, devotees are provided silver plates and served rice with delicious sambhar, rasam and buttermilk. Payasam, a South Indian desert is provided as a finishing touch to the meal. To say it was one of the most divine food I have had in any temple will not be an exaggeration. We thanked Goddess Annapoorneshwari for giving us the privilege of tasting her food once in our lifetime ! The meal more than made up for our disappointment at missing out on the temple food at Dharmasthala

On the way to Annadanam 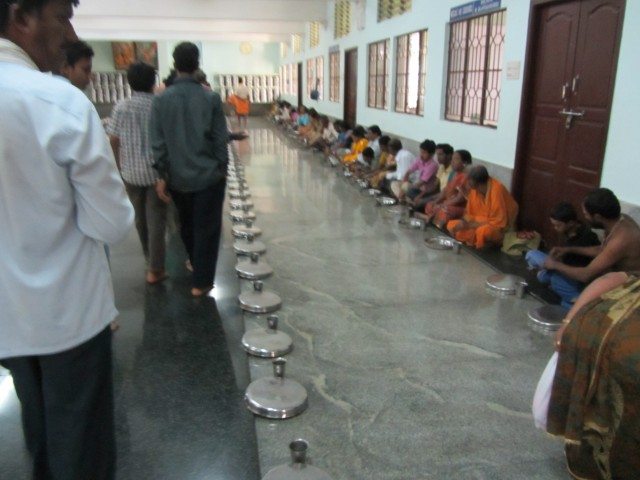 I also learnt about another salient feature of this temple, which was the Maha Mangalarthi performed at noon around 2 pm and again at around 9 pm in the night(please check, if I am inaccurate with the timings). At this time, all the deepas inside the sanctum sanctorum are lit and the doors are closed while the aarti is performed. The aarti which goes on for about 30 minutes is said to be a not-to-be missed visual specatacle, especially the one during the night. Unfortunately, our timings could not accommodate the aarti darshan.

We started out from Horanadu to Kalasa, 8 kms away at 1 pm. Kalasa is the location of the Kalaseshwara temple of Lord Shiva. Kalasa, surrounded by river Bhadra on three sides, is chiefly a temple town and a typical day trip to Sringeri, Horanadu is combined with a visit to Kalasa. Unfortunately when we reached Kalasa, the temple was closed for the mid-day break. But the temple priest was kind enough to let us have a glimpse of the main deity from just outside closed door of the sanctum sanctorum.

After clicking some pictures and more souvenir purchases for the relatives back home, we proceeded towards Kudremukh National Park on our way back to Mangalore, the details of which will be in my final post of this trip. 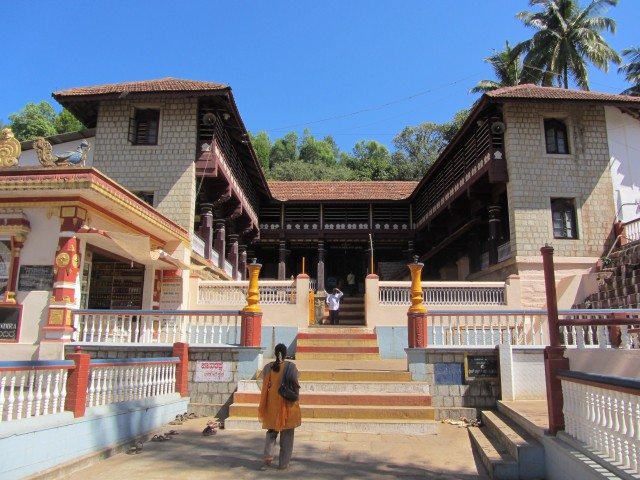 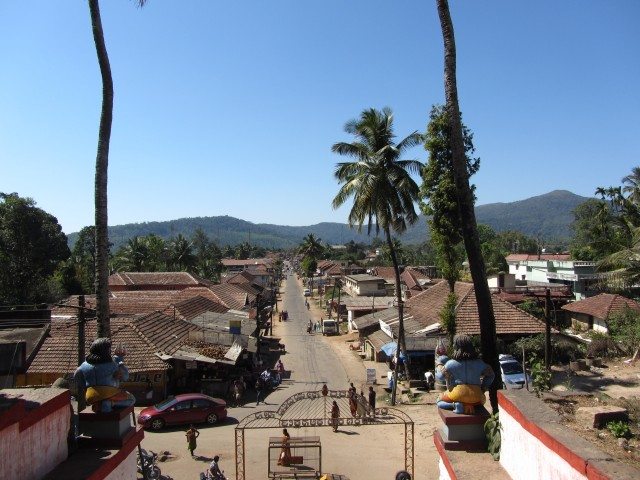 Kalasa town as seen from the temple