So I was on my way to Udaipur after having a nice time at Ranakpur, needless to say now I didn,t have to go through the steep slopes of Kumbhalgarh. Within a few minutes my car was on highway and Udaipur was within our reach. The time was about 2.30 P.M and a thought wandering in my mind was what after reaching Udaipur and at that point exactly I observed a small board to the left side of the highway indicating the distance of HaldiGhati as 17 kms. I  just said HaldiGhati chalen and without bothering for an answer from my family members I was on to the link road which took us through remote villages, mining areas, forest tract and dropped us at Haldi Ghati in about 45 minutes. 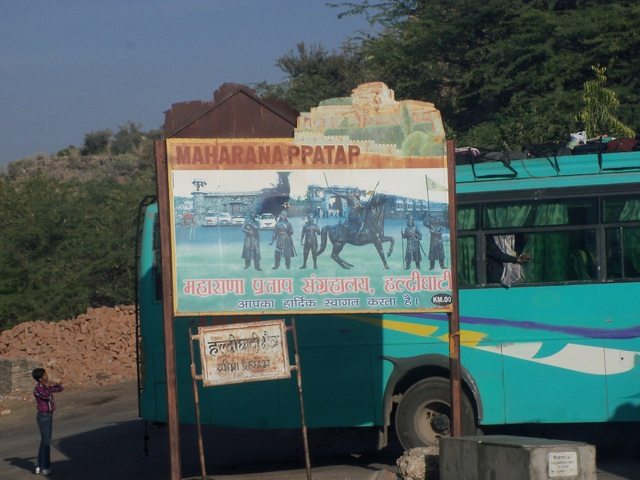 Entrance to the museum at Haldighati

After  reaching the place my family members became  apprehensive whether there would be any place here worth watching so they send me out for a survey . I saw three buses from Haryana Agriculture university Hisar there and it stuck to my mind that the place was worth visiting. After walking some distance I saw some camels with their lords waiting for small kids on their backs so that was enough to lure Pavani, only to lure. Finally I checked at ticket counter and the man satisfied me with his response. Now it was up to my convincing power to pull out my family members from the car.I simply said , BAHUT KUCHH HAI….. and now four of us near the main gate of museum of Haldi Ghati but as per order of high command some fruit time as on this trip we had been ignoring the fruit and loving the traditional Rajasthani fare. So before entering the complex we tasted jejubes.After entering the complex , it was again clicking time and out of those clicks one click has been relocated as my profile photograph for ghumakkar.It was suggestion of Savita to have clicked my photograph clicked beside the awesome statue of Maharana Pratap on Chetak in the capacity of my being a professor of history. 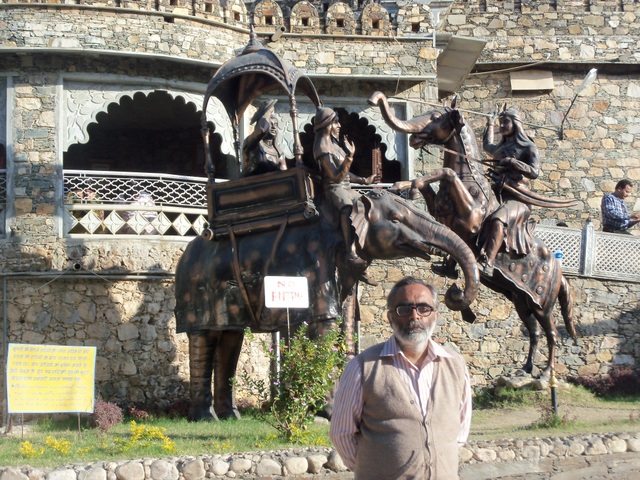 Yours truly being photographed

Frankly even I used to consider Maharana as just one leaf out of regional history of India but History can’t be absolute, I got practically knowledge after coming here where Pratap is a national hero and Akbar a mere usurper of throne.Time will judge……Firstly the guide assigned to us took us to a room having large pictures of all the Ranas of Mewar and explained to us the role of each principle character. 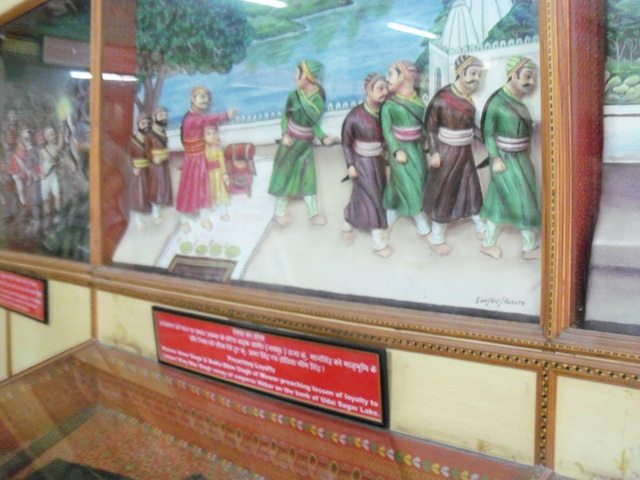 A scene depicting the akhet on Bedach river.

I  had a thorough look in the glass shelves containing some historical gems in form of books.MAN KAR RAHA THA SAB LE JAOON AUR APNI CHHOTI LIBRARY MEIN RAKH DOON……..(MY DREAM). Then he guided us in another room working as a small theatre and enthralled us with a documentary on Maharana Pratap,s life.If you observe the mouth of chetak then shall find that Pratap used to put a mask of elephant,s mouth on the mouth of chetak so as to deceive the army of Mughals who relied more on elephant corps.Isn,t it fallacy of history that Akbar was represented in this battle by Man Singh of Aamer where s Maharana Pratap had an Afghan as his main commander thus reducing this battle as a political one and not a religious one. Then we had a look at mini light and sound show as happens during Krishna Janamashtami , some stationary tableaus representing various scenes from Maharana Pratap,s life. The most poignant one was that of death of Chetak,s scene showing its loyalty towards Pratap. 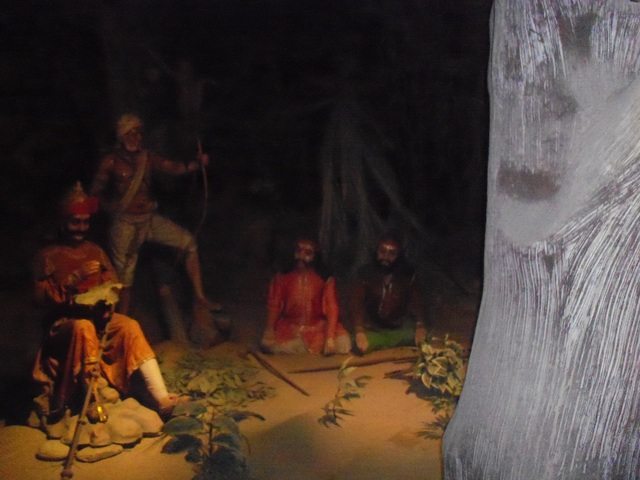 Maharana Pratap residing in the jungles

It is chronicled that after the death of Chetak, Maharana ji slept on grass and ate only jungle products and lived like an ascetic king for 21 years. I was wondering whether this was the place of battlefield in 1574 but the canteen wala there told us that when we move on to Nathdwara side on highway vast tract of about 7 km was the main battlefield area of 16th century. We straight away came from the documentary to an open courtyard, verandah with few shops on the sidelines and what stuck me was the shop selling GULABJAL which was said to be prepared in that area only. 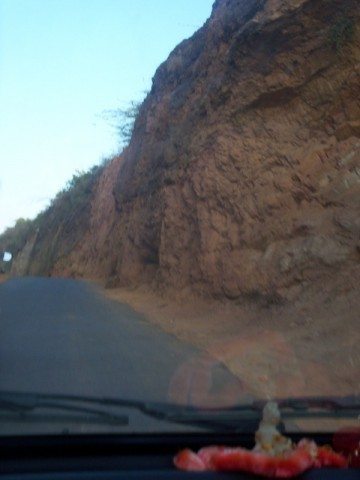 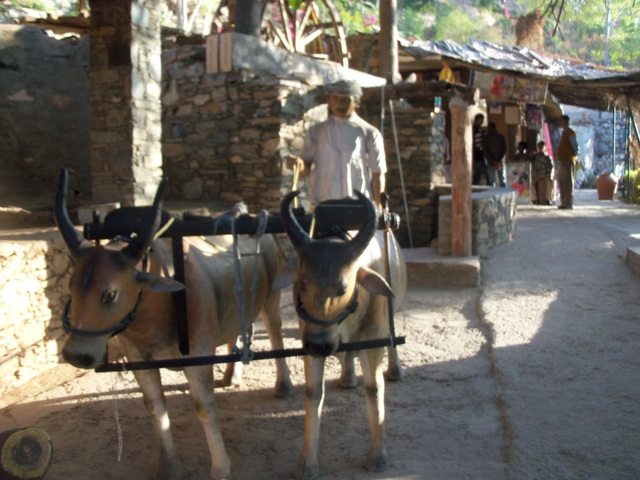 A scene depicting the village life

It was a surprise to me as the area around about was forest tract or full of yellow soil.Pavani got herself clicked on the wooden and plaster of paris structues of cows, camels and elephants and made herself happy.She became more happy after having a cornetto there, Bhakti with samosas and myself along with my wife sipped hot tea there thinking whether to reach Udaipur by going back to highway from where we had come(40 kms) or via Nathdwara (70 kms). Temptation to pay our respect to lord Srinath ji was much more than the shorter distance so it was decided to go through NathDwara. Exit from that place was followed by stopping at Chhetak,s samadhi for 2 minutes which was just 2 km from the museum and on the highway. 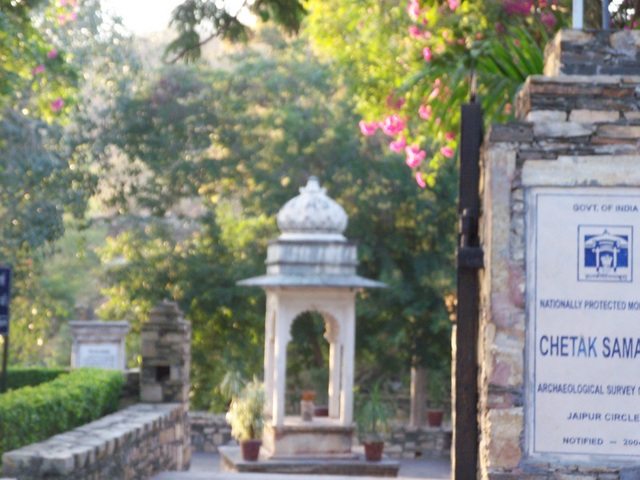 How one could forget  the deep loyalty of Chetak towards its master when in todays time loyalty is missing amongst the human beings. We were also thrilled to find so many peacocks in that area. It was just beautiful. I had never dreamt of visiting the famous Haldi Ghati battlefield site that also along with my closest kith and kin and that also driving my own car. After a few minutes we were on highway and from there Nathdwara town was about 4 km towards left. The beautiful evening was soon on the verge of merging with the queen of night as it was winters though the time was just about 5.20 p.m. Mausam khushgawar tha,door ghar baar tha , main apni car mein sawar tha aur kuchh hi doori par Srinath ji ka dwar tha. And the song playing in my mind at that time was yaara sili sili birha ki raat ka jalna from the movie Lekin. Lekin kyu….. pata nahin. MORE ABOUT NATHDWARA AND EKLING JI IN THE NEXT POST………….

A trip to Mewar – Haldighati was last modified: April 22nd, 2021 by Rakesh

The show began! At the beginning, various movements of the body, face, hands, legs etc were demonstrated to give the audience an idea of how the things are expressed in Kathakali. It was an interesting initial part of the actual play. The main play followed shortly after this.
It was a play from the epic Mahabharata, named Kichakavadam, the killing of Kichaka. The evil character, Kichaka, an-anti hero, was in the make-up of face, half green and half red. He was the commander-in-chief of the Army of the kingdom Matsya ruled by King Virata. Kichaka was the brother-in-law of King Virata. During their one year hide out, Pancha Pandava (five Pandava princes) and their wife Draupadi took shelter in the palace of King Virata. While Draupadi was disguised as Dasi (female servant of the Queen) calling herself Sairandhri……….