Whenever I looked at Google Maps to find places around Jaipur which can be covered in a day, one large blue area was my center of attraction. This large blue area is Sambhar Lake which is around 100 km from Jaipur. Thought of visiting Sambhar Lake was always in my mind but could not materialize in my several visits to Jaipur in last 3 years. Disclaimer – My wife is from Chomu, nearby town of Jaipur. So it’s almost second home to me :) . But during my recent visit to Jaipur in January 2012, I have decided even before going that I will definitely pay a visit this time. Sambhar Lake is India’s largest inland salt lake. More technical information about Sambhar Lake is already available on Ghumakkar via a very good post by none other than Nandan – https://www.ghumakkar.com/2008/04/19/getting-lost-in-sambhar-lake/. In fact the post by Nandan was also a big motivator for me to visit Sambhar Lake. 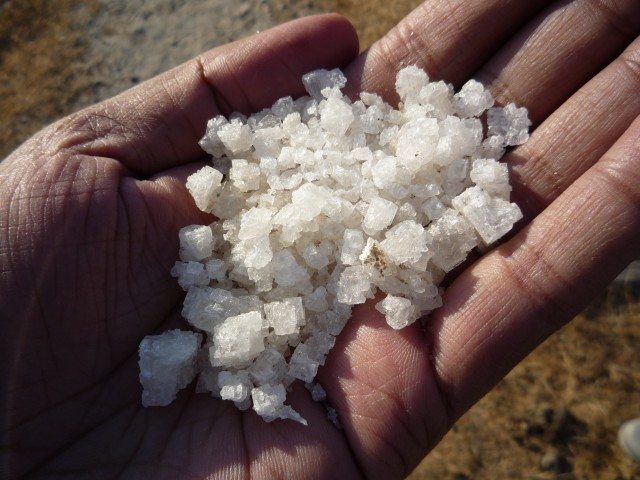 On January 13, the day before Makar Sankranti, we started from Chomu to Sambhar Lake around 2 pm.  Although I had decided to move around 12 in the noon  but as I was at my wife’s home so things were beyond my control. My wife was in no mood to visit a lake which is without water since many years. I was accompanied by my two brother-in-laws. We three were on a single motorcycle as both were equally excited  for the trip. Google Maps in my Android mobile was helpful in planning the route which was Chomu >> Renwal >> Jobner >> Phulera >> Sambhar. Total distance was around 90 km. We were already late so we decided to not stop in the middle anywhere so that we can spent more time at lake itself.  First 40 km from Chomu till Renwal were smooth due to good condition of road but the next 20 km from Renwal to Jobner were torture. 3 persons on a motorcycle on a bad road is never a comfortable ride. We had to stop for 5-10 minutes to give relief to our bodies. After starting again we reached Jobner town. While entering Jobner an old fort was visible atop a hill. I was willing to take a snap but did not want to stop again. Then we thought to check air pressure in tyres and fortunately the shop was near the hill from where I have taken a zoomed shot of fort. 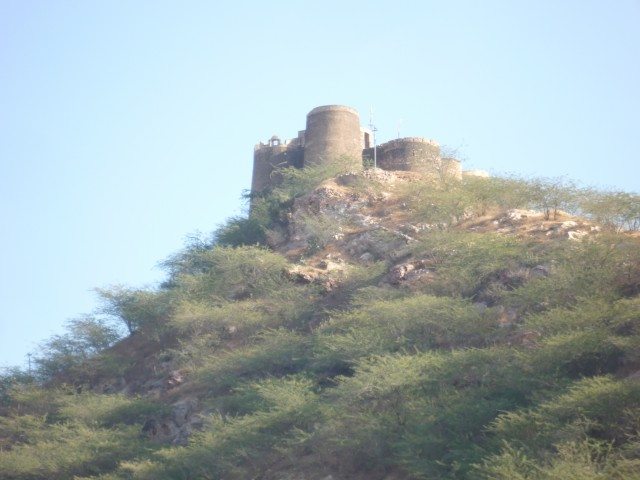 We started again after 5 minutes of stay as it was already 3.45 pm. Road from Jobner to Phulera was in very good condition. On this road at some places there were large number of trees with very few leaves and view was very good to be photo captured but due to running ahead of time we skipped that. We reached Phulera around 4.15 pm. Anyone coming from Jaipur side to Sambhar has to come via Phulera only. Sambhar is around 7 km from there and road condition was very good. Finally we reached Sambhar Lake town. After Nandan’s experience with local people about asking directions for lake, we have not tried that option. I saw a board of Sambhar Salts Ltd. and we took left turn from there via a very narrow and dusty road. With guidance from Google Maps we finally reached at Lake in another 10 minutes. We were expecting the lake to be dry but to our great surprise we could see some water.  It was an amazing feeling to view a large wetland till wherever our eyes could see. 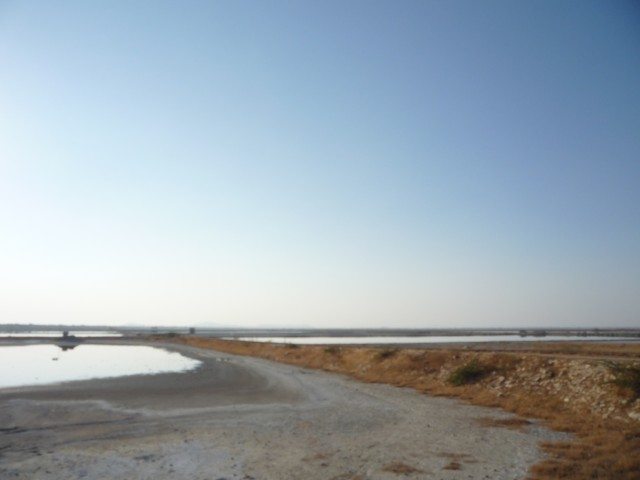 We have parked our bike after crossing a narrow gauge railway line. This narrow gauge line is being used to carry salt from one place to the other within lake. Suddenly we saw that one train was coming to our side from the nearby salt factory. There was one engine and two very small empty wagons. There wagons were made of wood instead of iron to prevent from rusting due to carrying salt. The wagons were detached from engine nearby us and the engine returned to factory. We could see from a distance that salt was being filled up in wagons in an another train by some people. Then we have a brief chat with one local old person who was working in the factory since last 30 years. He told us that nearby factory is government-owned, there are other private large factories which are on other side of lake. We came to know from him that the water which we were seeing was actually ground/boring water drilled by motor. He gave us directions of the nearby dam in lake where it has more water. We also enquired about Shakumbhari temple which was far and should have taken around 30 minutes to reach. We were not having much time so decided to skip temple and preferred to see more of lake.

We started our bike and crossed a dusty path of around 200 meters to reach on a tar road which was like a ring road around the lake. On the way we see a narrow gauge small coach without engine which was carrying passengers. There must be some inbuilt mechanism in the coach so that it could run without an engine. We also saw large dry lake beds with narrow gauge track acting as a line of border.

Wooden wagons behind the Engine 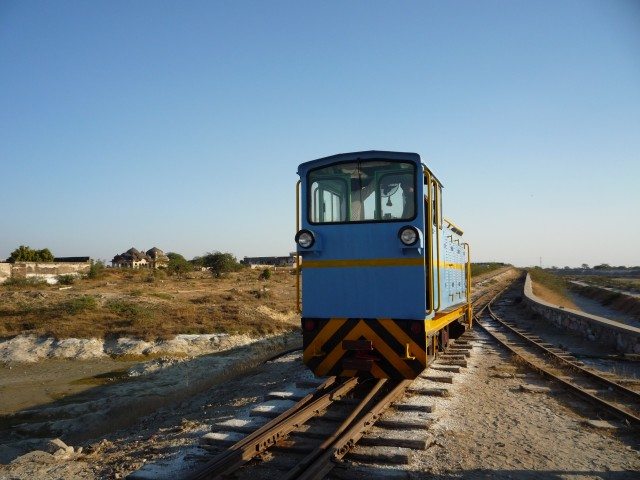 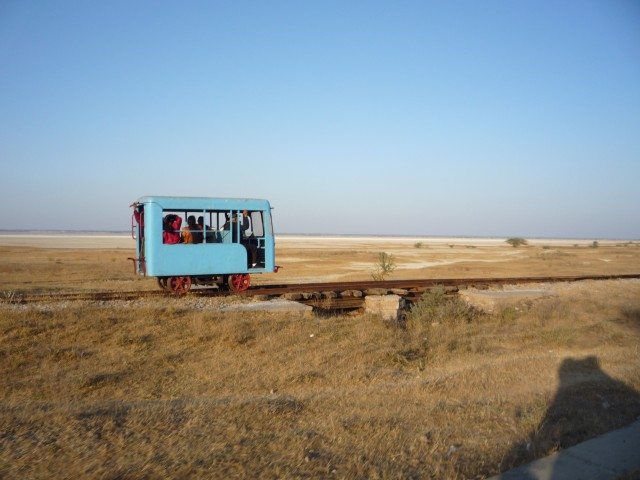 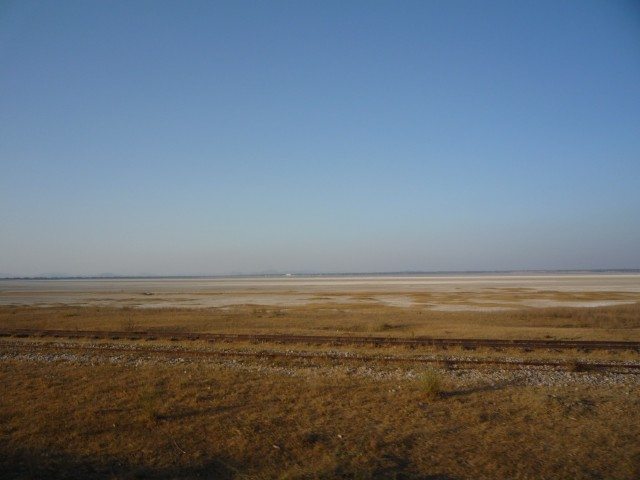 We keep moving on the road but dam was nowhere in picture. It should be around 5 km from the place we started and we have already crossed more than that. Then I check on map that we were moving far from lake and decided to return. We realized that there was no connecting road to dam and there must be an entry point. We found a dusty track which was going towards the lake. It must be used by tractors and other vehicles. Finally we were inside the lake and it was amazing to drive bike in the lake :). We parked our bike and decided to roam around. On one side of the lake was dry beds with muddy patches in between while on the other side there was water. We saw a person coming on bicycle who in fact was the only person apart from us there. He was an employee there and told us about salt formation method and other related things. He also told us that we were still far from the dam and more water was on another side of the dam. It was already 5:30 pm and we had to go back  around 100 km on almost empty roads so we have decided to keep that for future visit. We spent another 30 minutes there to witness various forms of salt, rusty rail tracks, more water and very short but beautiful sunset. There is nothing much to describe so please enjoy pictures below. One more thing to mention is that we had crossed broad gauge (Jaipur-Jodhpur line), meter gauge (Chomu-Loharu line) and narrow gauge (Sambhar Lake) tracks on a single day in our journey.

We started our journey back. It was an uneventful journey on bike in complete dark.  Due to lack of time we could not see all parts of lake but something should be left to come again………… 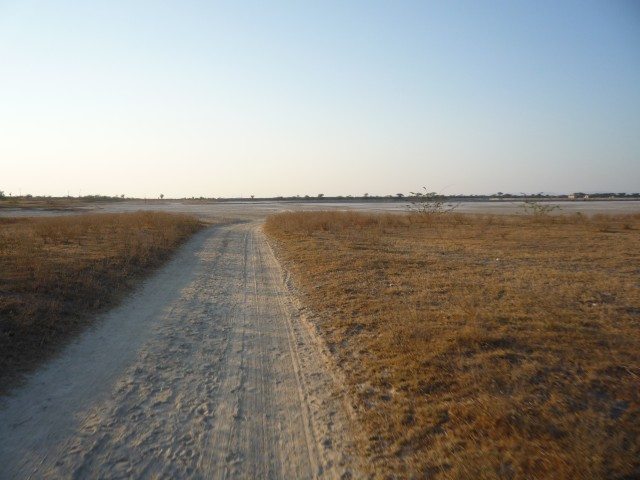 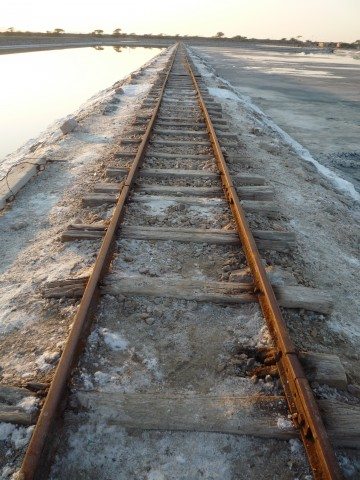 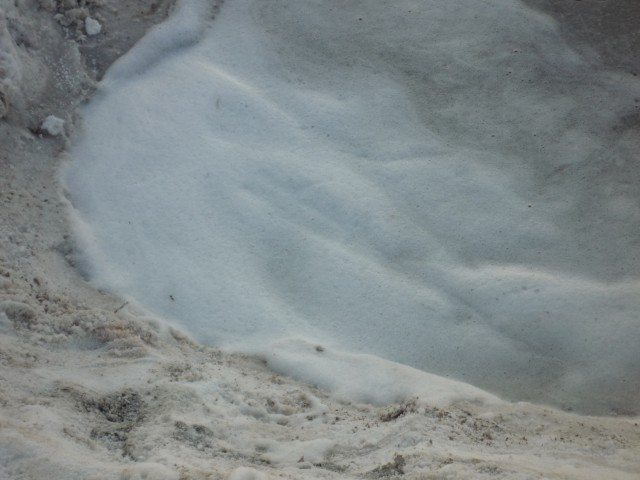 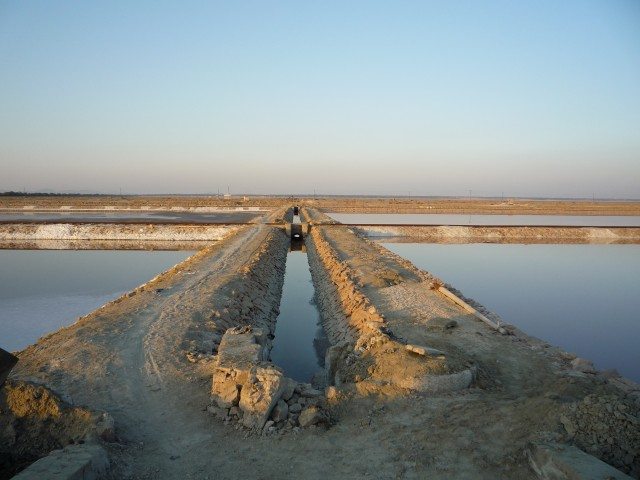 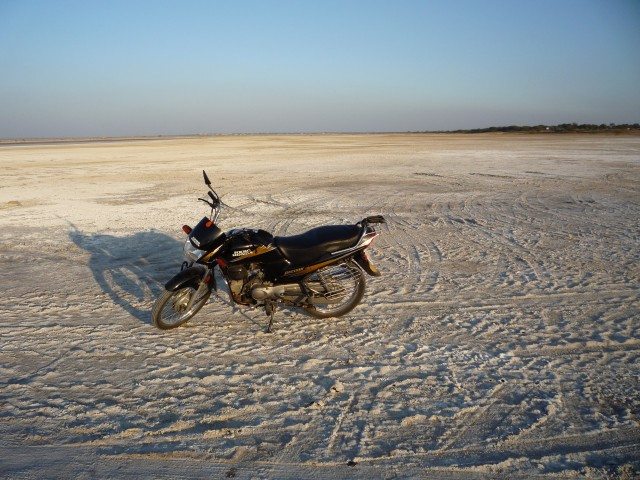 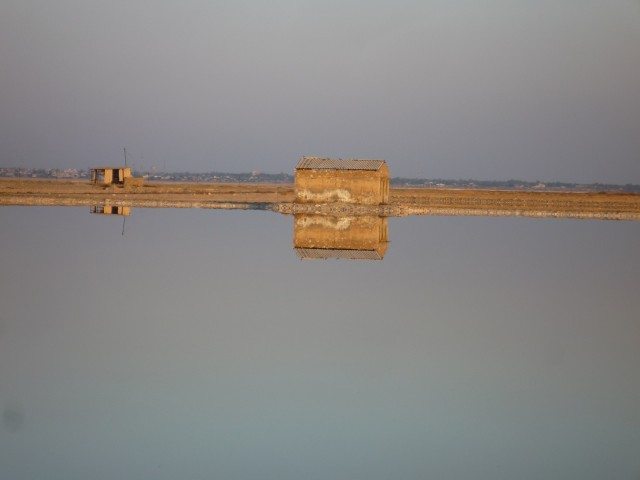 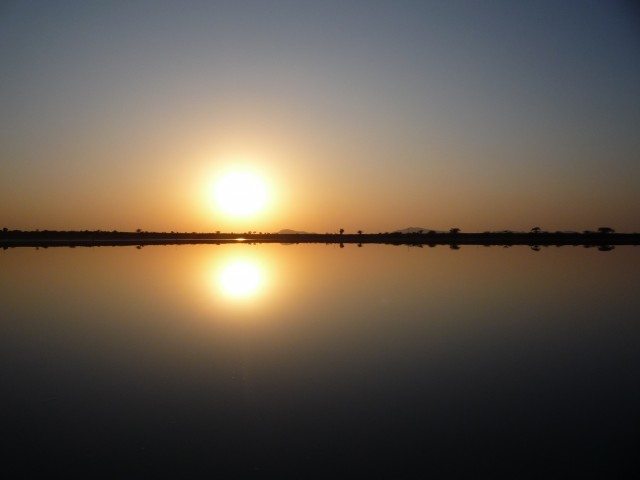