After experiencing a painful night’s sleep I was feeling comfortable next morning, though not completely fit. Major part of this day was scheduled for roaming around. During the planning we had explored many options to utilize the day in the best possible manner. First we thought of visiting Tsongmo (Changu) lake which is a glacial lake around 40 km from Gangtok. But due to high altitude of 12,400 ft and rough terrain road the idea was rejected as we were having many kids with us. But it was a very tough decision indeed. Considering a large group, we preferred to visit various places in Gangtok itself. Our local sightseeing team has already talked with one local tour operator to arrange the taxis. Around 25 taxis were booked, a major part of the fleet were Maruti Omni and a few Alto. Scheduled time slot for the visit was 7 am to 1 pm.

We started a little bit late around 7:45 as everybody took time to be ready for the day and also on the breakfast table. We have already printed some pamphlets with name of organization to be pasted on the taxis so that we could identify our taxis during the day. As each taxi could occupy only four persons, our members formed small groups of four persons on their own and the taxis left one by one. In my taxi we were two couples. Their son was of almost the same age of our son Ojas, so we were a perfect group. We left almost in the last after making sure that nobody is left in the hotel.

The very first place to visit was Tashi View Point. It was around a distance of 7 km from our hotel.  It is an observation point at an altitude of 6000 ft developed be erstwhile king of Sikkim, Tashi Namgyal. On clear days in early morning, this is the best place in Gangtok to view the mighty Mount Kangchenjunga, the third highest mountain in the world. We felt a dip in temperature after reaching there. There were a couple of shops selling woolen items so we purchased one cap for our son to keep his head and ears protected. My wife also purchased a cap for her, not for protection but for fashion :). We climbed few steps to reach Tashi View Point.  One observation deck has been built there along with one souvenir shop. We were there in the month of May and it was the time for pre-monsoon showers. Due to this there were clouds everywhere and we did not have any chance to get any glimpse of Kangchenjunga. But despite this fact the view was very good.  It was a heavenly feeling to view the hills of Gangtok valley covered in clouds. Everybody was enjoying the place and photographs were taken in different angles and poses. 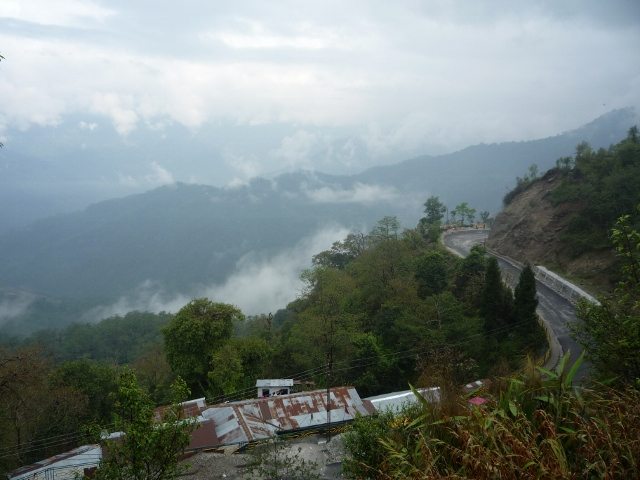 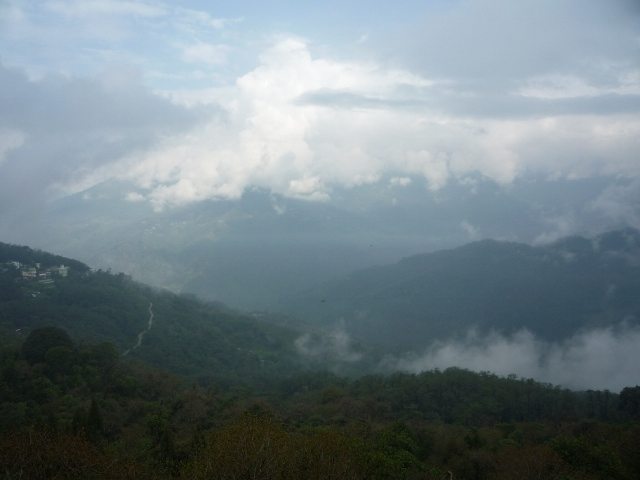 Our next destination was Ganesh Tok. It is also another observation point along with the temple of Lord Ganesh. There is one large open area near the parking suitable for photography. As usual in most of hill stations there were few shops for providing traditional local dresses on rent. Many of our members mostly women were busy in giving poses in different outfits, these dresses were the same which my wife bought yesterday as I have written in part 3. We also took part in photo session but in our original clothes. Then we reached at the observation deck after climbing few stairs. The deck gives amazing views of Gangtok city surrounded by green hills of the valley. White foaming clouds were addition to the beauty which we were witnessing. Local television tower is also visible from Ganesh Tok and it was providing a different aspect to the beauty rather than acting as an obstruction. I clicked different forms of Mother Nature from all corners of the deck. We also paid a visit to small Ganesh temple built very close to the deck. 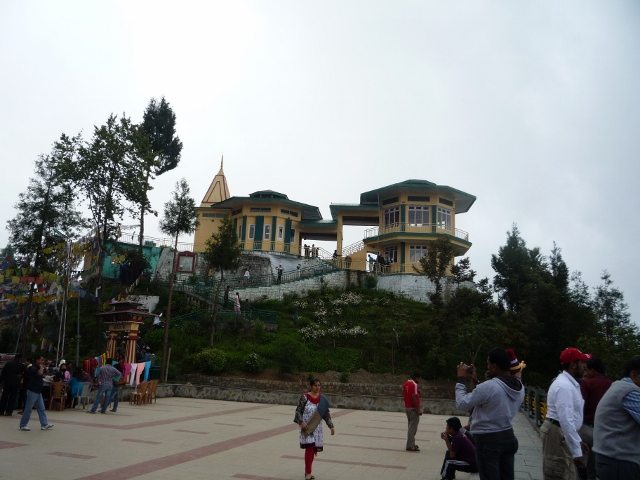 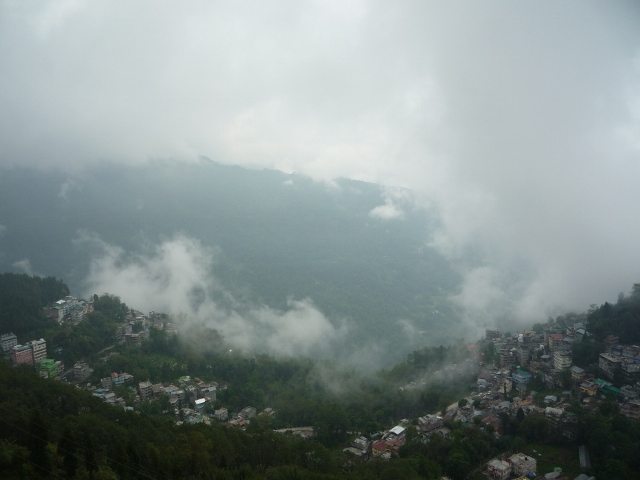 After spending enough time at Ganesh Tok we moved towards our next point Ropeway. The ropeway runs from Deorali to Tashiling, the highest point in the city. There were long queues for tickets when we reached there but persons of our taxi operator were already there with our tickets. It saved a lot of time. One small lift took us to the starting point on first (or may be second floor) of the building after passing through in an another but short queue to enter into the lift. We waited for few minutes for the next ropeway trolley to arrive. We were excited as it was the first time for me and my wife to have a ride in ropeway. The trolley was a closed one with glasses all around having capacity of 20 persons. There were no seats in the trolley, everyone has to stand. After running for few minutes they stop the trolly in the air for 2-3 minutes from where a clear view of Kangchenjunga is possible. But as it was a cloudy day we only enjoyed the view of green hills. We also saw beautiful while color building of Sikkim Assembly from the ropeway. They have a midway station at Nam-Nang where the trolley stops for a minute to again start for its destination. After reaching the second and final stop, it started its journey back and followed the same routine of stopping at the middle station and once again in the air. We were very happy after completing our ride in the ropeway. Gangtok is amazingly green wherever you see and this green color was set in our eyes after the ropeway ride. 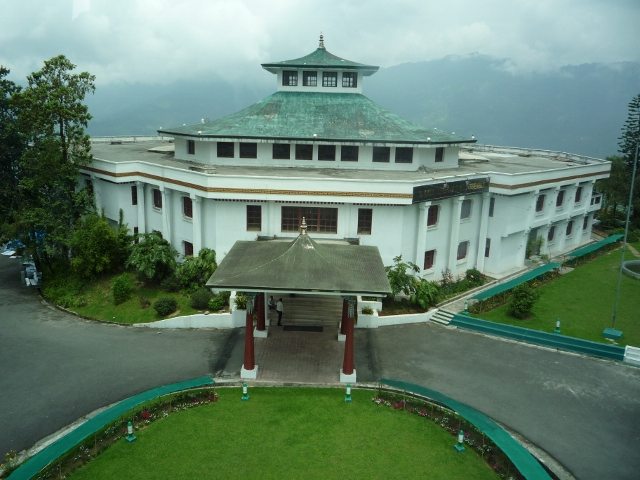 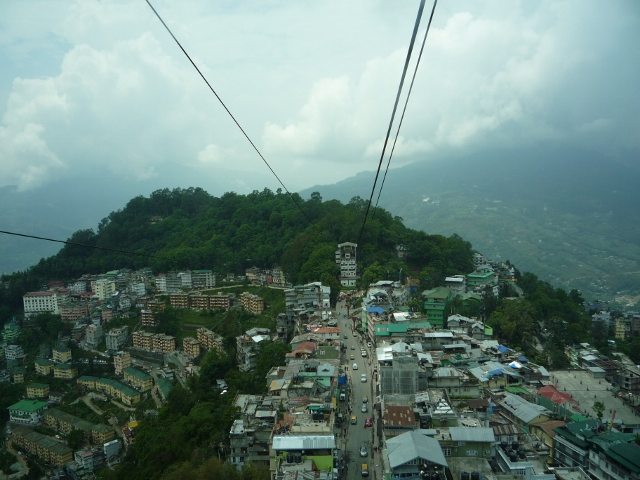 Photo of starting point of Ropeway while coming down

Then our taxi operator has asked us to move further on foot for 250 meters to reach Namgyal Institute of Tibetology and Do-Drul Chorten Monastery , both places are very close to each other. The distance was not much but this was an ascent road. The time was around 11.30 and we were feeling hungry after losing a lot of energy in the three points covered so far. I was also not feeling very good due to the pain last night, so we took the tough decision to skip these two points. We saw a small eatery joint in front of Namgyal Institute and relaxed there by sitting and enjoying delicious Patties, Aloo Bondas and Samosas with juices. We spent around half an hour there and by that time everybody was back after visiting the Institute and Stupa. This eatery joint was hit as almost everyone has ordered something to eat. I could not visit these places but I would recommend both the places specially the monastery as it has the biggest Stupa in Sikkim. 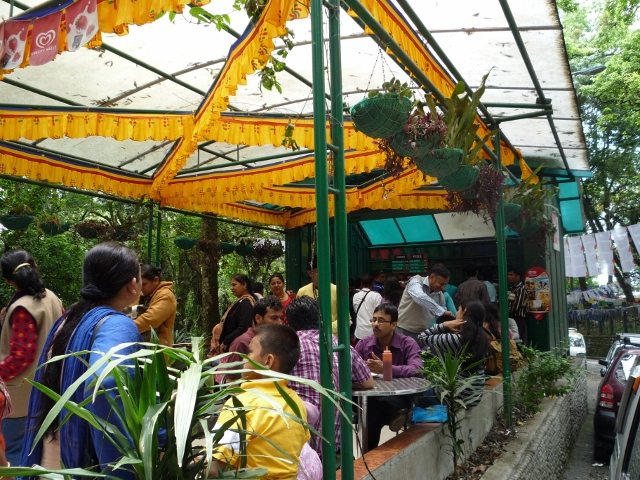 One final destination still remained to visit and it was Ban Jhakhri Falls. It is a theme park surrounded by lush green forest on the outskirts of Gangtok. The word Banjhakri refers to the forest priest (ban means primitive; jhakri meaning shaman/priest) so park has been developed on Shamanistic (magical powers) theme. The park is spread over 2 acres with many ethnic sculptures and figurines of the Jhakri culture. There is also a water pool with a large dragon shape in it. The biggest attraction of the park is around 50 ft waterfall. Many small bridges have been built on the water stream coming from the fall, these bridges are good to click photographs with waterfall in background. Another good thing I read later about this park is that it’s fully operated on solar energy. Our persons were enjoying in full masti at the water fall.  They were posing for the camera in groups below the fall and in water streams. My wife also enjoyed a lot in the water. A lot of small shops are also there selling fancy items with a number of eating joints. 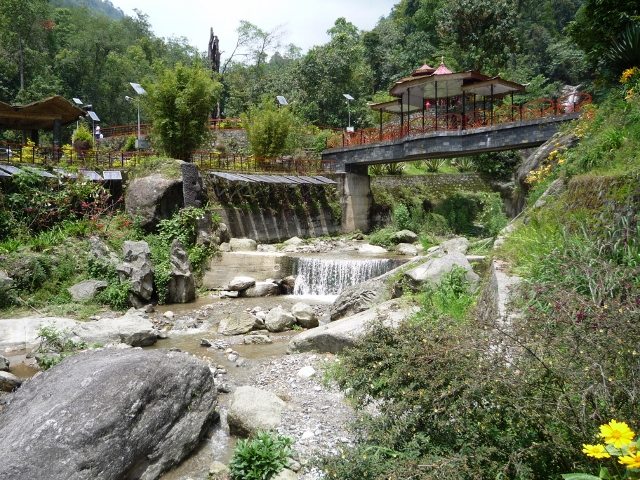 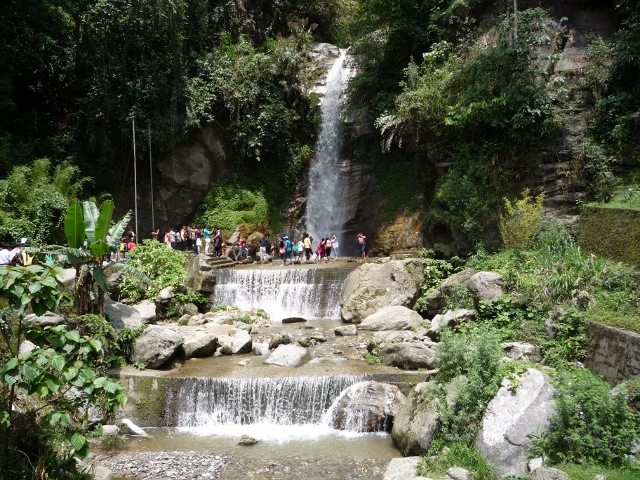 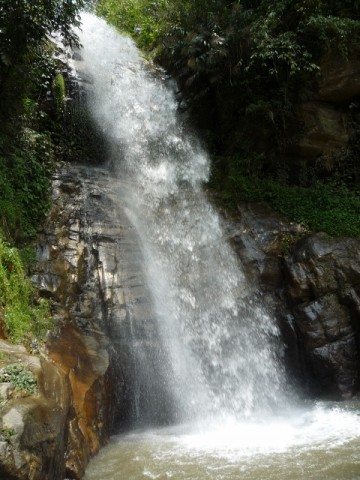 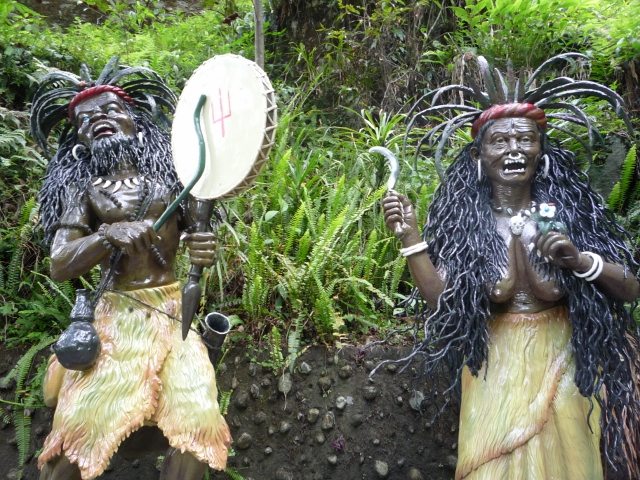 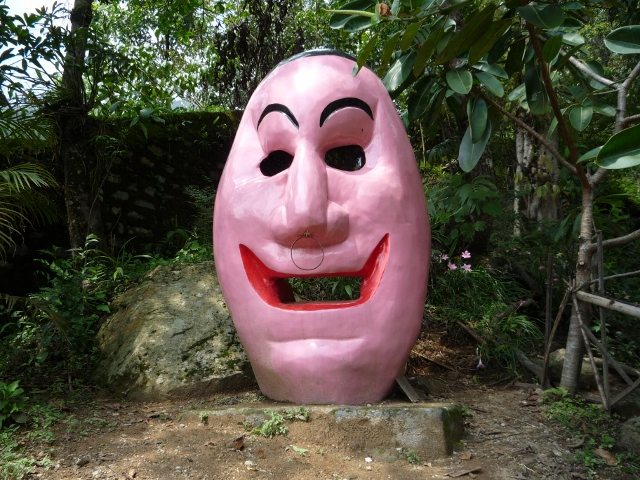 So after visiting these all places we returned to hotel around 2 pm. This was supposed to be end of personal activities for the day. Official sessions were scheduled in the evening from 2 to 8. But on popular demand of everybody we had to cut short the official session at 6 and a 2 hour shopping window has been given to roam once again on MG Marg. This time we took taxi for both side journeys to save time. MG Marg was very eventful in the night with bright neon sign board in the shops. We just roamed on the road and enjoyed delicious veg momos, for which Gangtok is famous. Everybody was already given instructions to return at sharp 8 in the hotel to be part of a surprise item.

More about this surprise item and return journey in next and final part of the series.