Inexplicably, Rajasthan never attracted us in all these years of travel. Even now, it was a must attend wedding in Jaipur that drew us here at the end of October and using the marriage as an excuse, we happily planned a ten day trip from Jodhpur through Jaisalmer, Bikaner and Mandwa before reaching Jaipur.

Well, the best made plans often go awry. The introduction to Rajasthan ended up being just a few days in Jaipur though we made the most of it as best we could.

Driving from the airport along broad boulevards, I was instantly reminded of Mysore and was not surprised to learn later that Mysore’s Diwan Mirza Ismail had a significant role to play in the layout of Jaipur.

The hotel we stayed at was a converted haveli, well maintained with spacious grounds, resident langurs and delightful peacocks! Regrettably the ultra bland food and the covertly racist attitude of the owners left a lot to be desired – which is a story that has already been narrated in a Trip Advisor hotel review. 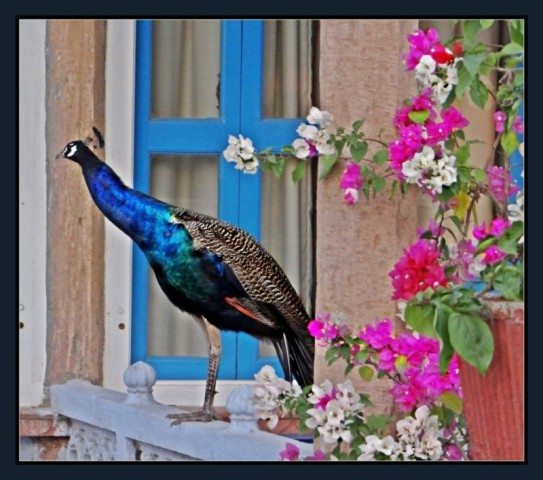 We were within convenient walking distance of the old Pink City, though it was not at all a pleasant walk thanks to the overpowering stench of urine on the pavements. Not that this is unique to Jaipur. 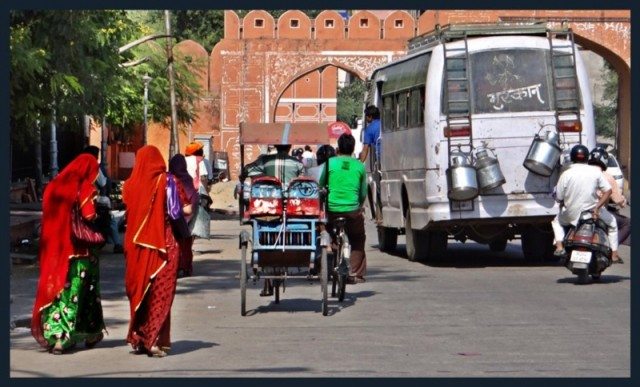 Upon entering the walled city, we were immediately accosted by each and every shopkeeper of each and every shop in the myriad bazaars within. This was annoying enough for us as Indians. It must be downright intimidating for the foreigners.

The shopkeepers aggressive sales pitch were a big put off. Having said that, I could see why Jaipur is called a shoppers paradise. Though most of the wares on offer were touristy tat, there was certainly a huge variety of some rather good tat as well. I succumbed and did not leave without my fair share of purchases though I would have bought a lot more had it not been such a nuisance having to bargain fiercely in every store. Initial prices quoted anywhere were at least 3 to 4 times higher than the final settled amount. The haggling became just too much of an effort and I decided not to buy anything more. The Jaipur traders are geared to sell to the foreign tourist though I doubt that most foreigners would pay such steep prices, they probably drive a much harder bargain than we do. One cannot even walk in peace without being constantly assailed by men beseeching you to enter their shops. 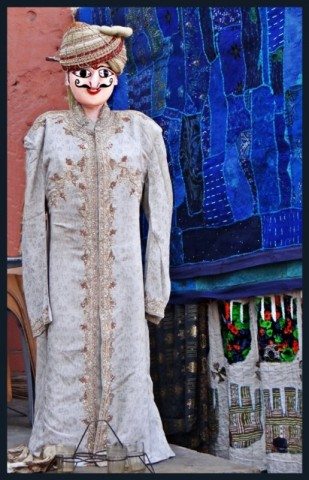 The walled city was charming with the old dilapidated havelis and their delicated carved lattice windows, narrow little bylanes and colourful Rajasthani women in traditional attire. As we passed by LMB or Laxman Misthan Bhandar, we popped in for the famous Pyaz Kachori. It was pathetic and tasteless, made more so by having to eat it standing at a dirty counter. I noted that the locals there were eating Chow Mein and not the Kachori! Incidentally this so called Kachori was more like a glorified Puri Bhaji but with the Bhaji stuffed inside the Puri and then fried. If there was any onion in the stuffing, I could not discern it, the taste was more like potato. What a let down. 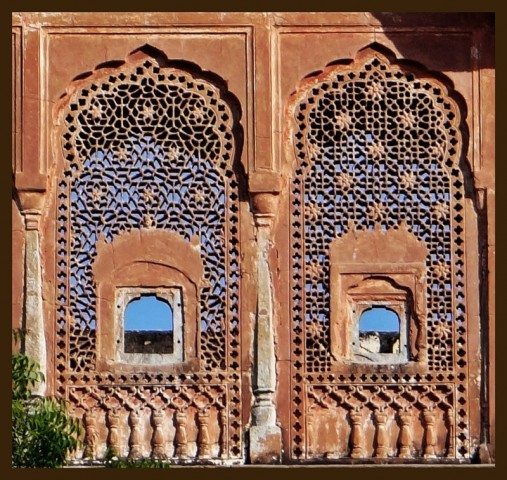 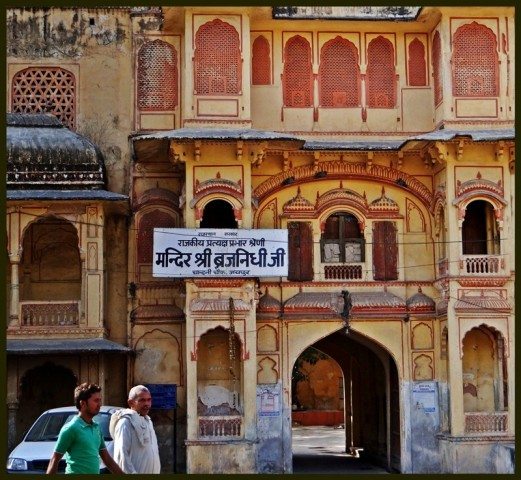 At the Hawa Mahal, a cycle rikshawallah cajoled and implored us to engage him. He said he would take us up to the Jal Mahal and on the way back he promised to show us places that tourists rarely see. For all of Rs 50/hr. His charm worked. It was a different and most enjoyable way to explore the old city by cycle riksha tour. 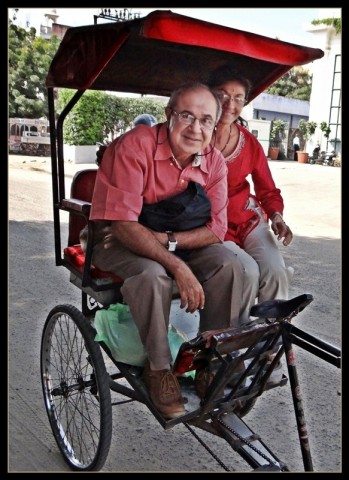 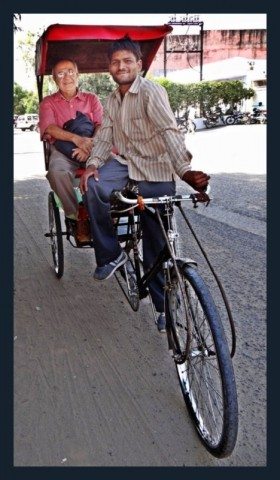 Elephants were casually sauntering on the roads near the Jal Mahal as though they were a mainstream form of transportation! Our rikshawalla said that if we wanted an elephant ride, this was the place to do it @Rs100/head instead of at Amer where he said the charge would be Rs700. Thanks but no thanks. We were perfectly happy with our cycle riksha ride. 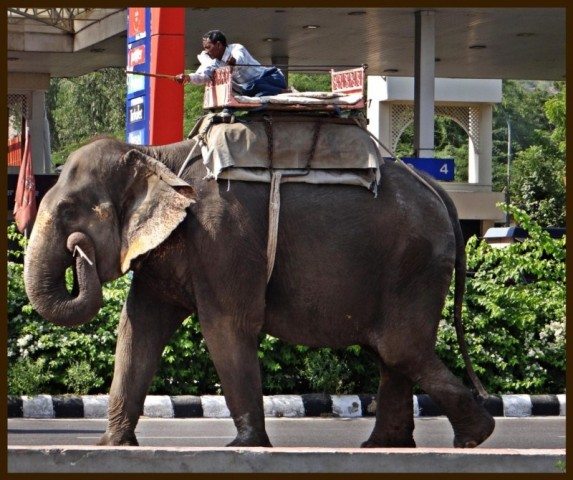 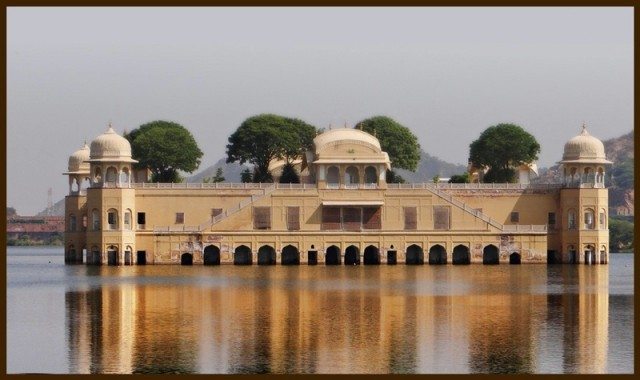 The cycle tour was the highlight of our Jaipur visit, thanks in no small part to the non stop entertaining banter from our self appointed tour guide, a gentle and jolly soul. He certainly took us past some interesting parts of the old city including a visit to a Baby Hawa Mahal as he called it! We mentioned our poor experience with LMB. He commented wryly that the tastiest Kachoris could be had from the street vendors, not the popular tourist joints. We asked where we could get good Kulfi and he took us to Pandits Kulfi House which was quite good. After 3 hours of cycling around, he dropped us back at our hotel. Needless to say, we paid him a lot more than what he asked for, he surely deserved it and he did not even ask for anything extra. 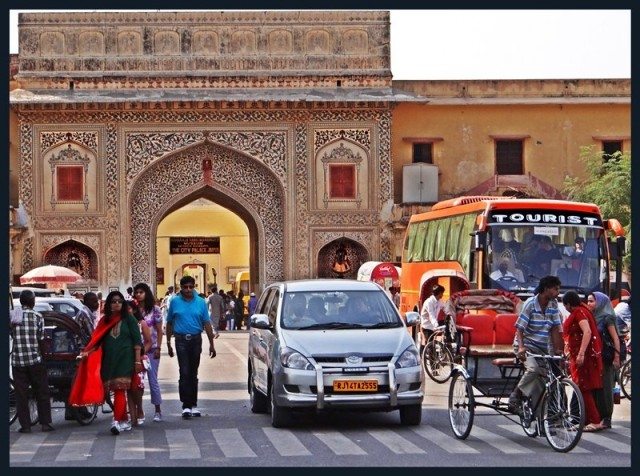 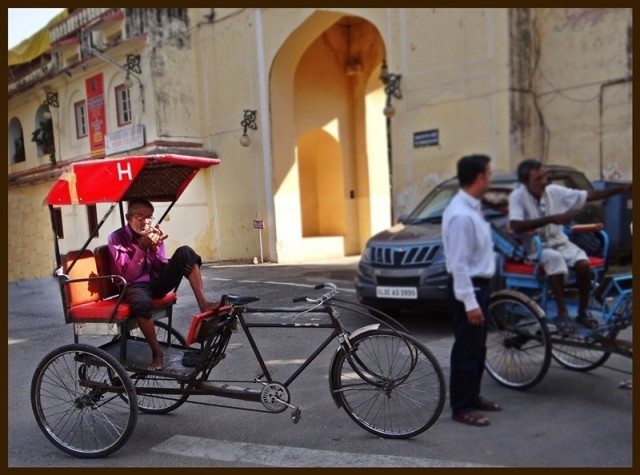 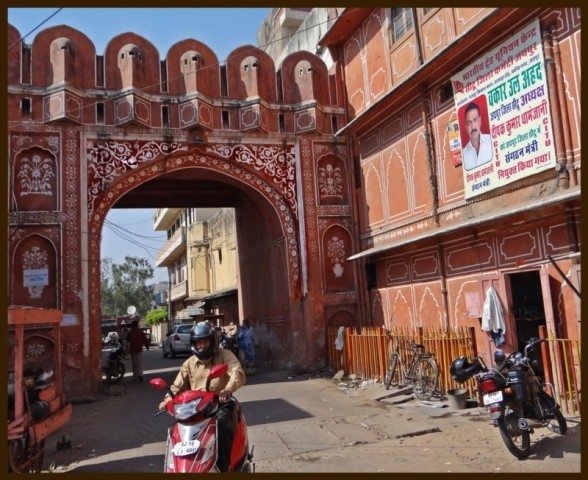 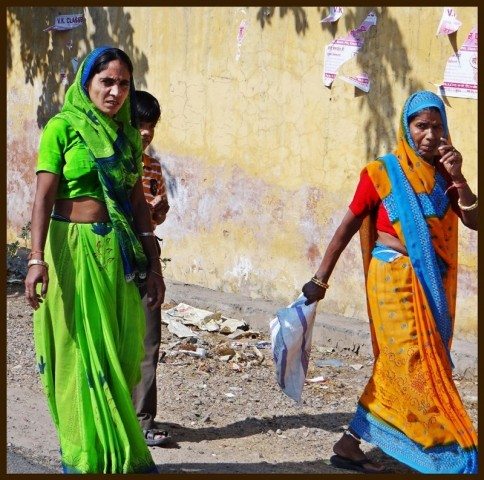 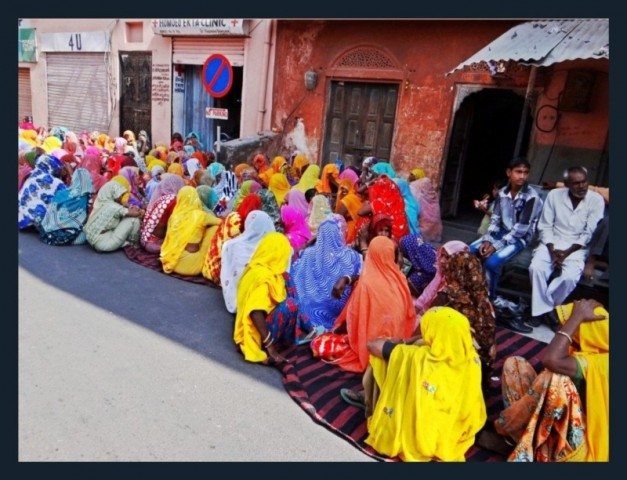 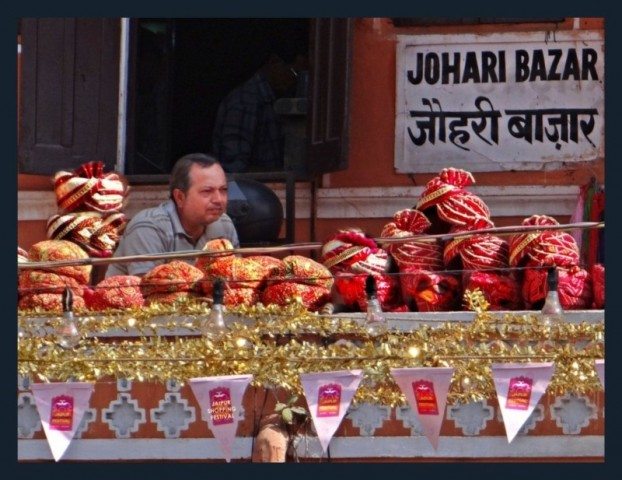 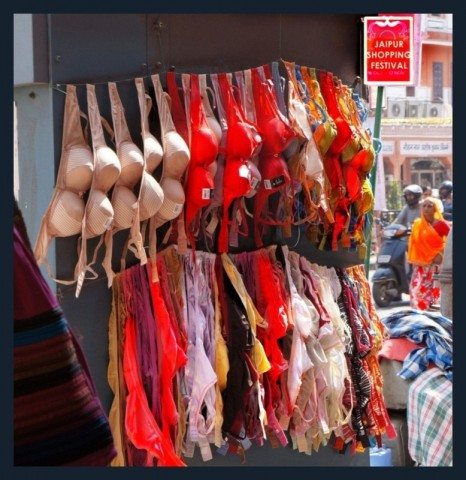 Regrettably our new found friend said he could not take his cycle riksha to the Amber Palace, so the next morning we hired a taxi for the trip to the forts. The historic settlement around Amer looked a lot more interesting that the forts. They should be good to wander through on foot in cooler weather, though again I noticed tourist shops just about everywhere. Our driver said that some of the foreign visitors stay for months in cheaper guest houses here.

We were not that impressed with the Amer Palace, nor with the Jaigarh Fort. By the time we were through with Jaigarh, we were a tad Fort – I – Fied and did not really feel like going to Nahargarh. Our driver suggested we try the Pyaz Kachori at Rawat Misthan Bhandar so he dropped us off there on our way back. What do I have to say about the famed RMB Kachori? Certainly tastier than the Kachori at LMB but nothing extraordinary about it. And the same dirty counters to eat it off. Most street stalls in Delhi do a better job on Kachoris, why even the Kachoriwalla in the bylane of Kalbadevi near my office in Mumbai makes tastier Kachori.

Apart from the one miserable dinner and the equally poor breakfasts at our hotel, we did not get a chance to try any “authentic” Rajasthani food as we had to eat dinner every day at the wedding functions which was the usual hotel wedding buffet fare.

Overall I found the forts, and Jaipur as a whole, far too touristy. Everything seems geared towards making the foreign tourist feel more welcome than the Indians. This is just an initial impression based on a few days stay at the end of October. It might well be better in an off season. 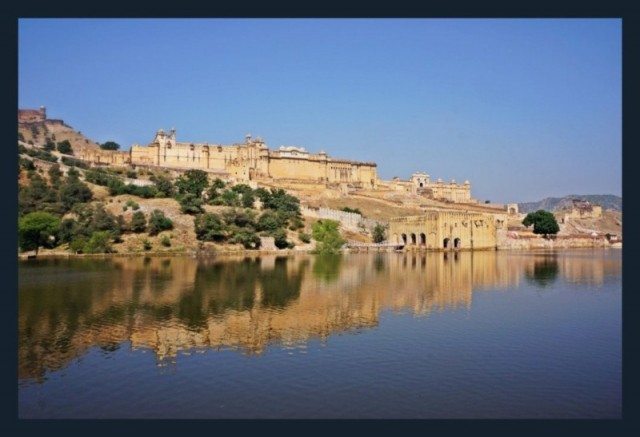 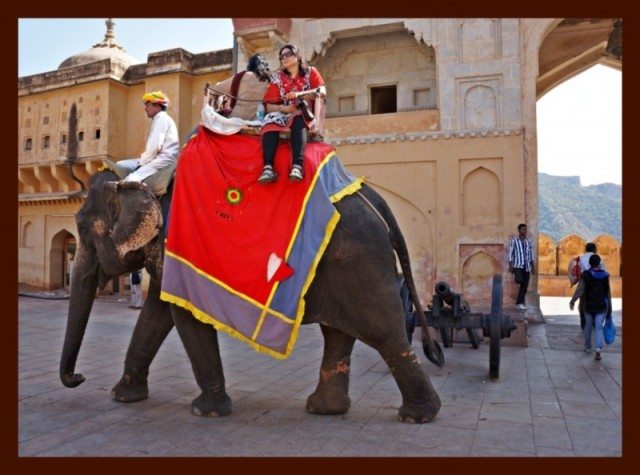 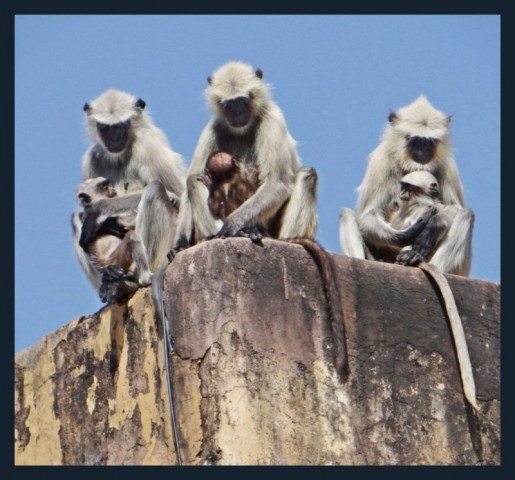 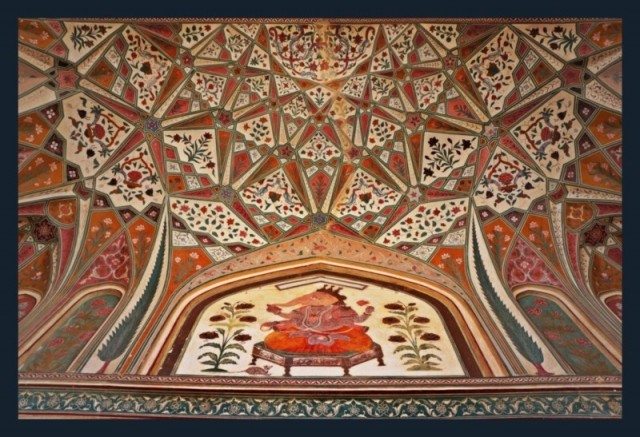 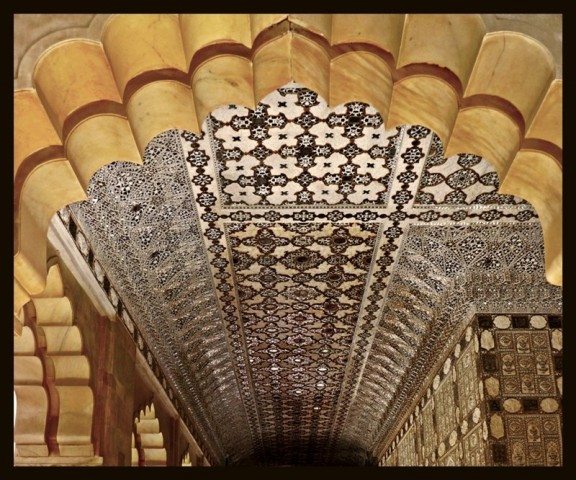 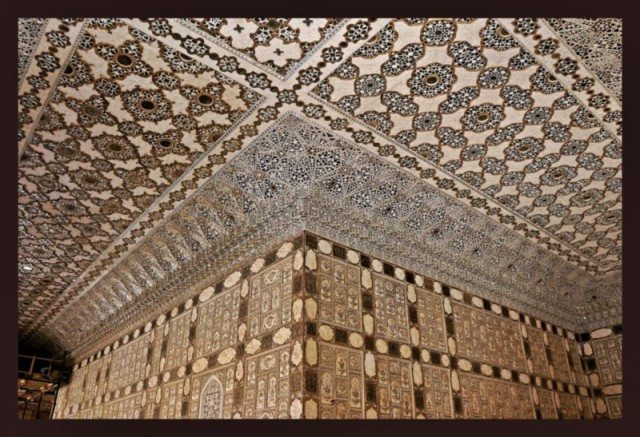 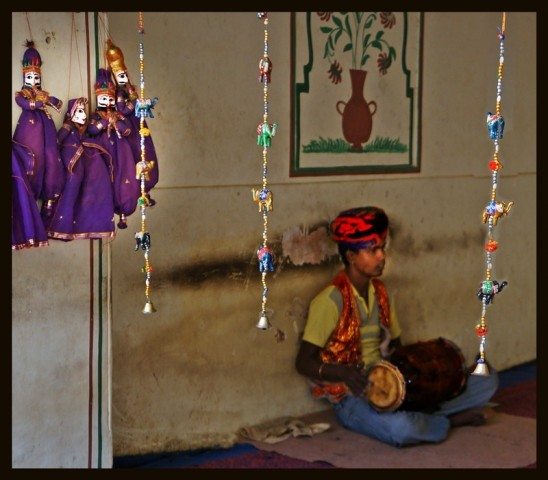 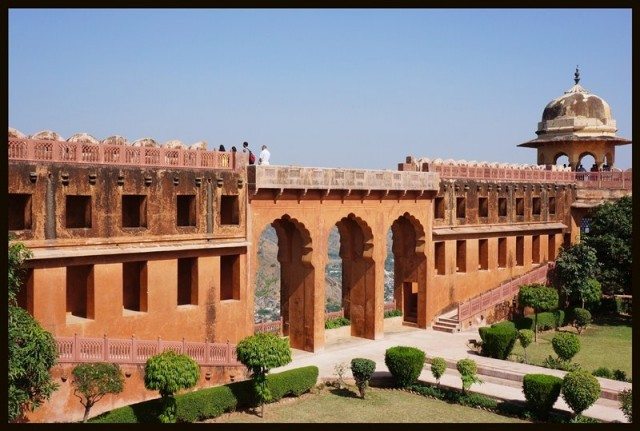 A Glimpse Of Jaipur was last modified: March 5th, 2021 by Gita AM

Image Address: https://www.webworktravel.com/wp-content/uploads/projects.jpg From Diu to Santorini, the world is a big, amazing place just waiting to be explored. So many times, you see…