In HIS own country it was our first visit to a temple.  Made in a typical Kerala style of temples, the temple of Thrikakara Vamana Moorthy is located 25 Km from Fort Kochi. Unlike other tourist places in Fort Kochi, this temple is less visited by the tourists and we were the lone tourists in the temple on that day. It is the main centre of Onam festival when it is visited largely by the people from many places. 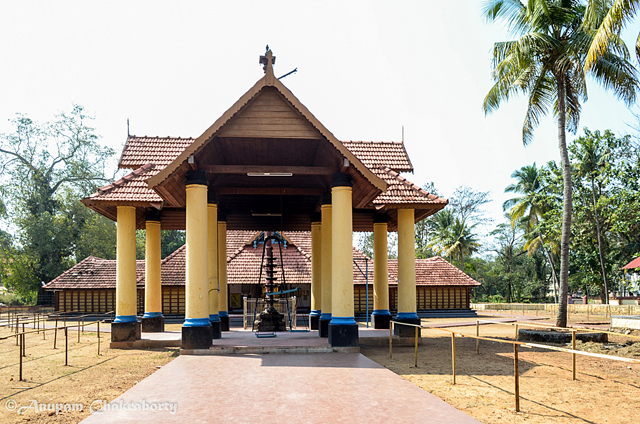 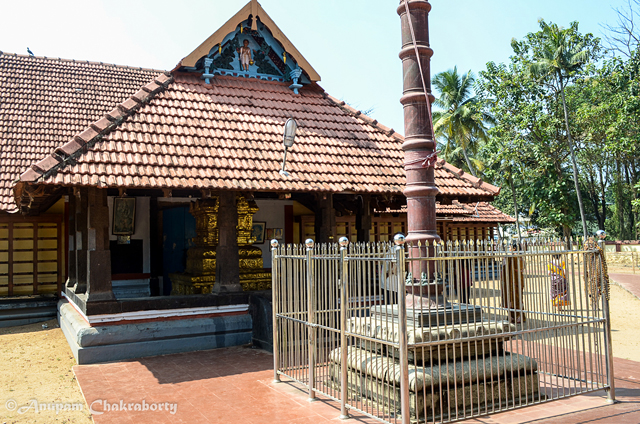 Legend has that Mahabali, the popular Asura King, extended his kingdom to the earth, and the patala (underground) which caused worry to the Gods. Lord Vishnu, in his form as Vamana, asked the Asura King Mahalbali for a piece of land only three steps wide. Generous king Mahabali granted the wish. To occupy three steps wide land, Vamana grew to an immense size and with his one step covered the heaven and the earth with another. There was no space left for the third step. Then the Asura King Mahabali offered his own head for the third step. Before going into Patala, Mahabali made a last prayer to Lord Vamana for granting his wish to visit Kerala once in a year, to see that his people are happy. His wish was granted and it is believed that Mahabali comes during the Onam festival (August-September) to see his people and to visit his land. All these events were happened at the place where this temple is now located. 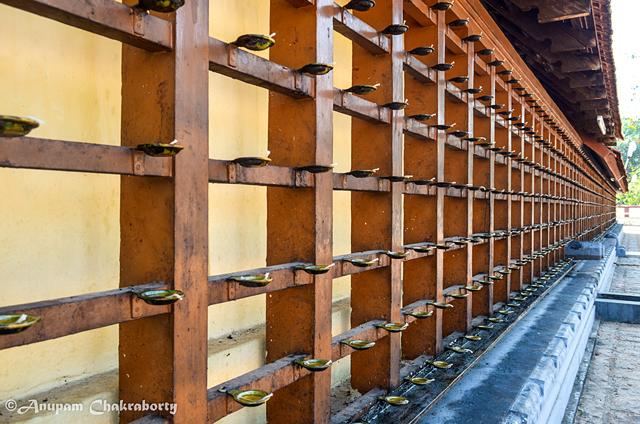 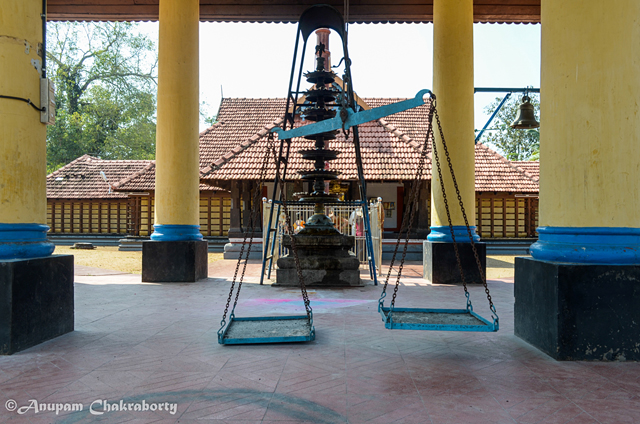 A weighing scale in the temple compound

The temple remains open till 11 in the morning and opens again at 5 in the evening. As we reached the temple during its closed hours, we could not see inside of the temple. However, we could circumambulate the temple from outside. 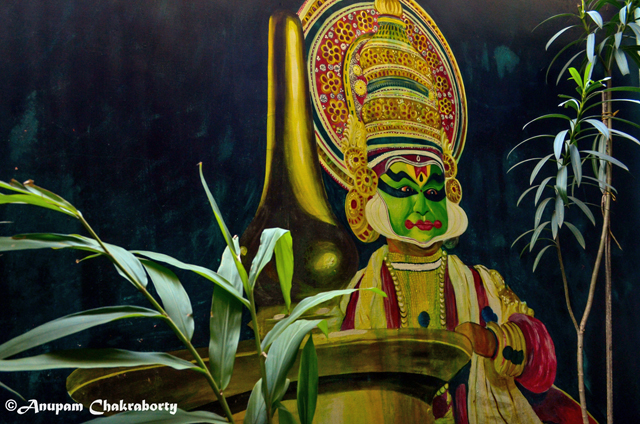 A painting of Kathakali Artist in the Kathakali Theatre

A Big thanks to Mrs. Asha Abraham for suggesting us to experience Kathakali. Mrs. Asha, the owner of Chiramel Residency, a Home Stay in Fort Kochi, suggested us to experience one of the greatest art forms of Kerala, KATHAKALI.

As the name suggests, KATHAKALI means Story (Katha) Play (Kali). In a most colourful fashion, the characters in the play do make-up and wear costumes to perform Kathakali. In Kathakali, the make-up is very important and it takes minimum of an hour to get a character ready for the stage. Nowadays, the theaters in Fort Kochi, offer the opportunity to witness the make-up process which normally starts one hour before the show. 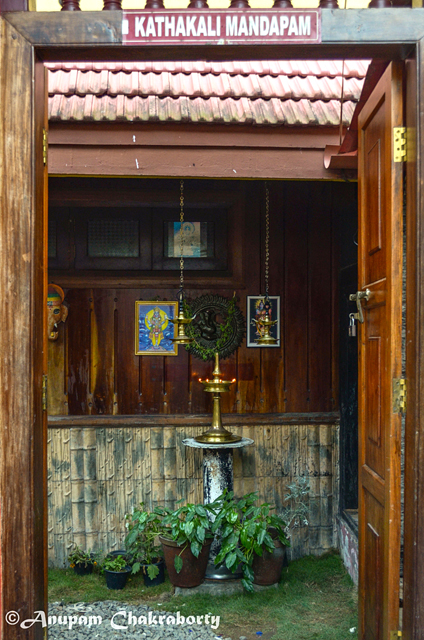 So with the intent not to miss the opportunity to be entertained thoroughly, we set off to the venue well before the schedule time of make-up. Our tickets were booked at Kerala Kathakali Centre, one of the oldest remaining theatres in Fort Kochi. When we arrived at the Kathakali centre, make-up of the artists were about to start. Soon the hall was occupied in full, mostly by the foreign tourists. Domestic tourists were less as compared to their presence in the sea beach. 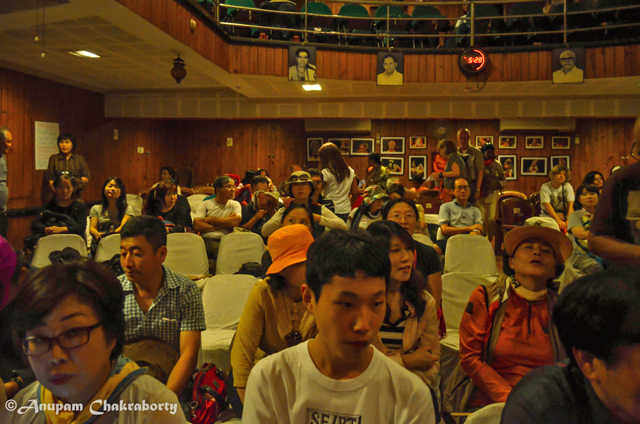 Audience in the Kathakali Centre 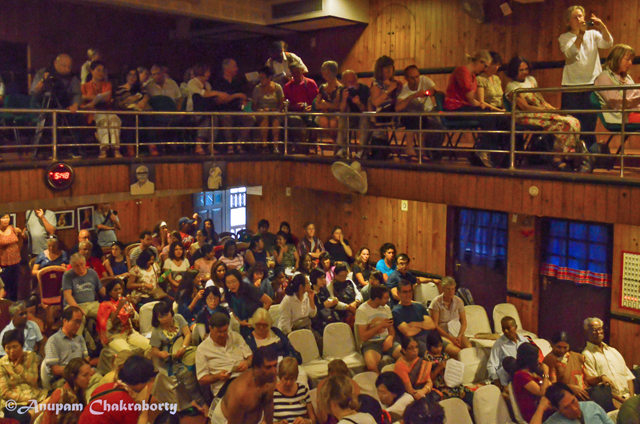 Even the Gallery was also fully occupied!

During the whole one hour of make-up show, everyone present in the hall was busy in taking pictures and I too found my feet in the front to capture some finest moments. The patience of the artists to go through the long process of make-up is really admirable. 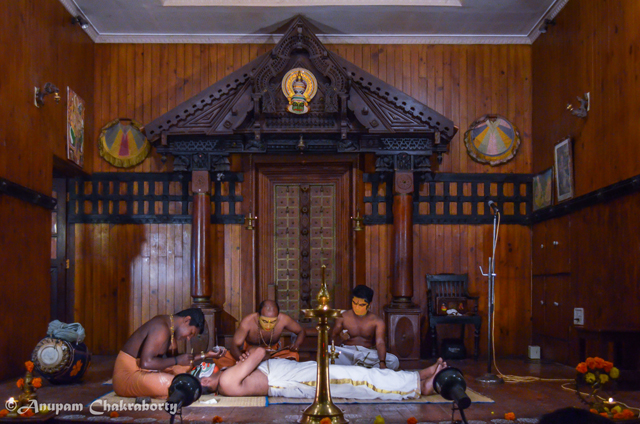 Make-up is done on the stage 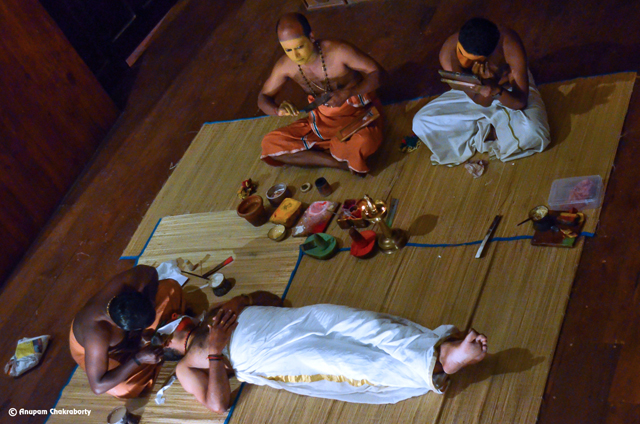 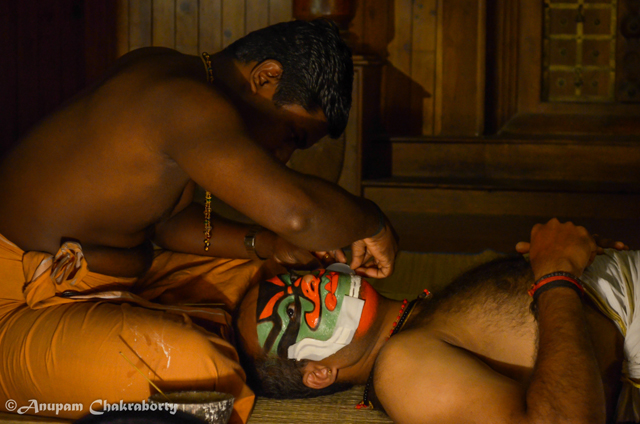 The show began! At the beginning, various movements of the body, face, hands, legs etc were demonstrated to give the audience an idea of how the things are expressed in Kathakali. It was an interesting initial part of the actual play. The main play followed shortly after this. 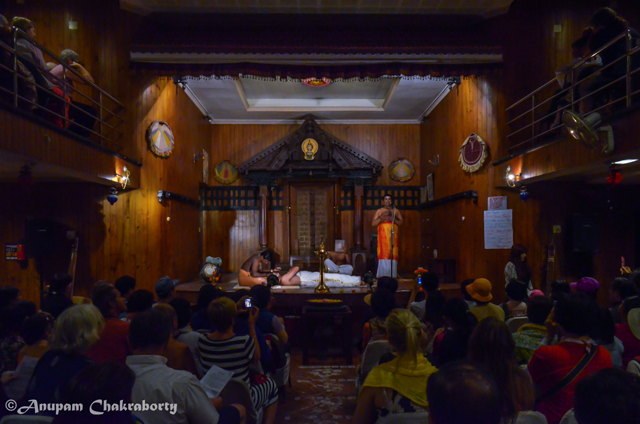 The anchor announcing the beginning of the show 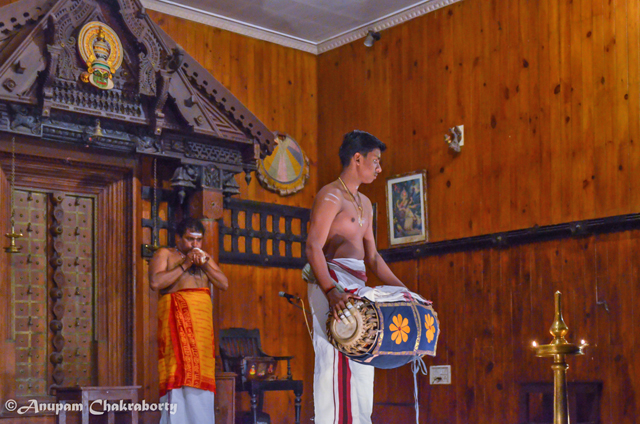 The Show began with the blow of conch 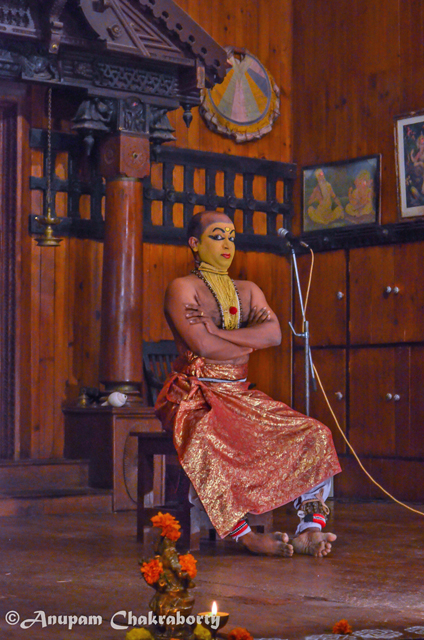 It was a play from the epic Mahabharata, named Kichakavadam, the killing of Kichaka. The evil character, Kichaka, an-anti hero, was in the make-up of face, half green and half red. He was the commander-in-chief of the Army of the kingdom Matsya ruled by King Virata. Kichaka was the brother-in-law of King Virata. During their one year hide out, Pancha Pandava (five Pandava princes) and their wife Draupadi took shelter in the palace of King Virata. While Draupadi was disguised as Dasi (female servant of the Queen) calling herself Sairandhri, Bhima (one of the five Pandava) was as Chef Vallala. Kichaka desired Sairandhri many times but failed. He then insisted the Queen who was his sister, to send Sairandhri in his room to serve wine for him. In that night the lustful Kichaka forced himself on Sairandhri. She ran towards the royal court for justice without any result. When none came forward in her help, Sairandhri approached Vallala. He consoled her and chalked out a plan to kill Kichaka. According to the plan, Sairandhri would entice Kichaka and invite him to come to the Dance hall at midnight. Vallala would disguise himself as a woman in the dance hall and wait for Kichaka. Sairandhri did as planned. At midnight, when Kichaka came in the dance hall, much to his pleasure, he saw Sairandhri (whom he thought to be so, but it was Vallala) was lying covered by a cloth. As he touched the person, the figure revealed himself as Vallala who pounded Kichaka to death. 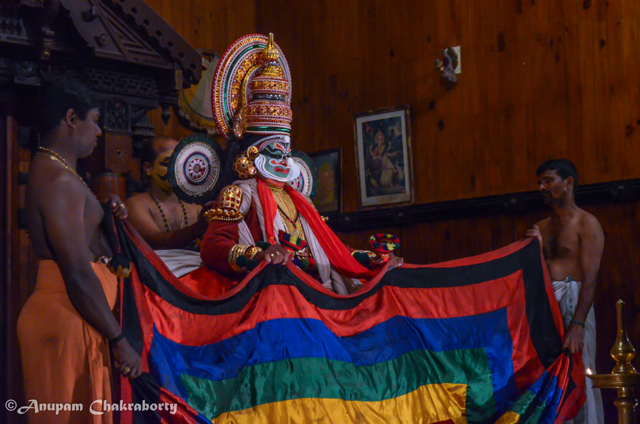 Kichaka’s (anti-hero) appearance in the stage 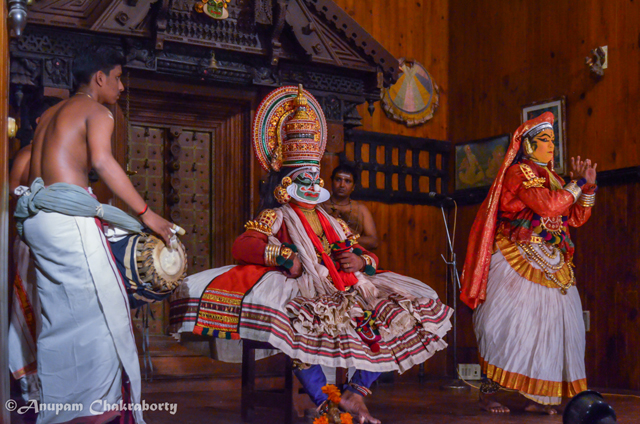 Kichaka desired Draupadi (disguised as Sairandhri) and trying to convince her 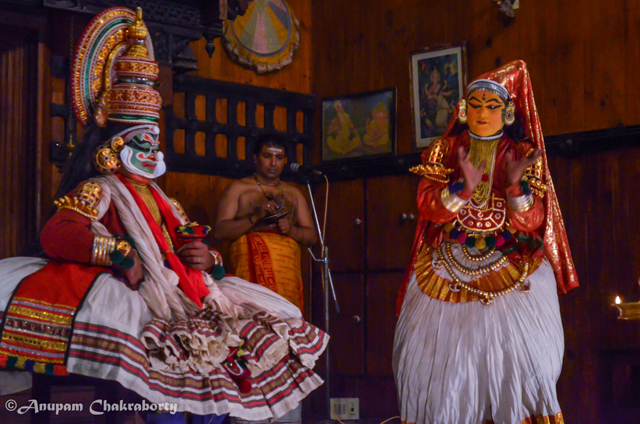 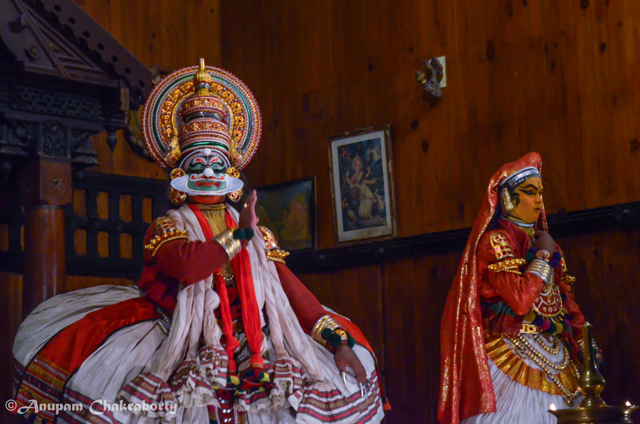 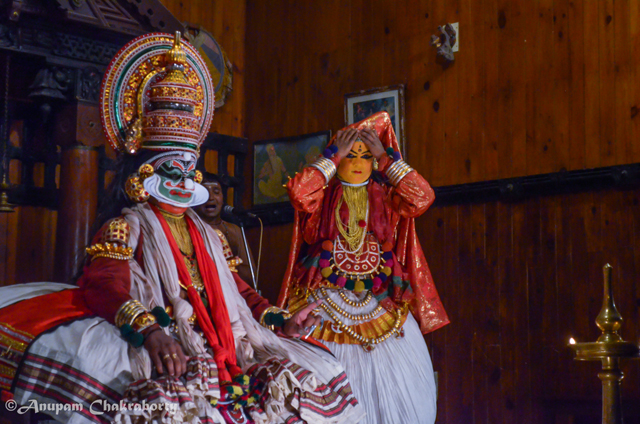 Sairandhri shocked by the indecent proposal 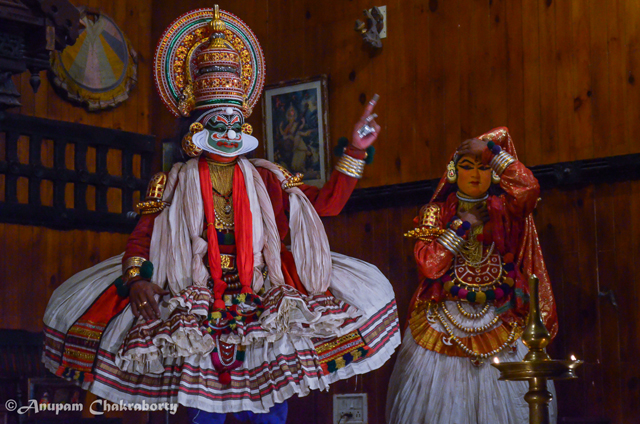 Kichaka threatened Sairandhri to force on her. She ran and escape. 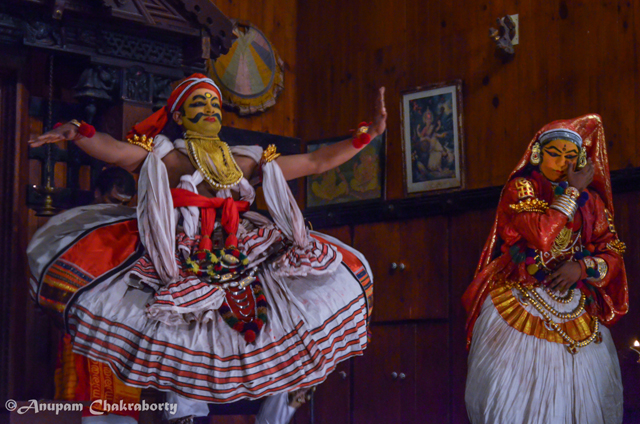 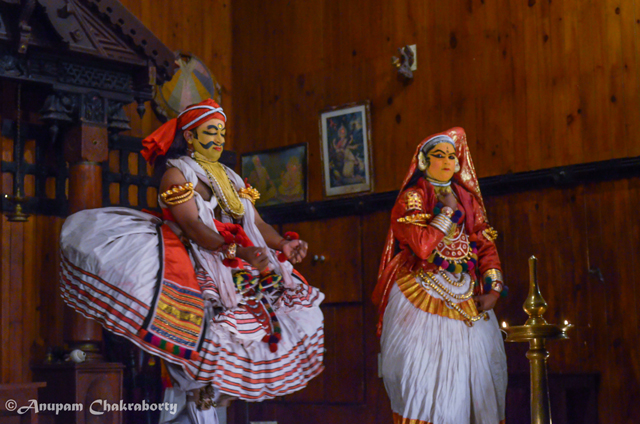 The plan to kill Kichaka now chalked out 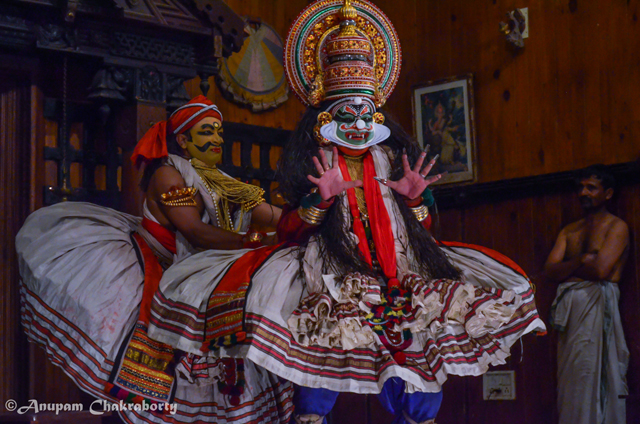 At midnight, in the dark dance hall Vallala was pounding Kichaka 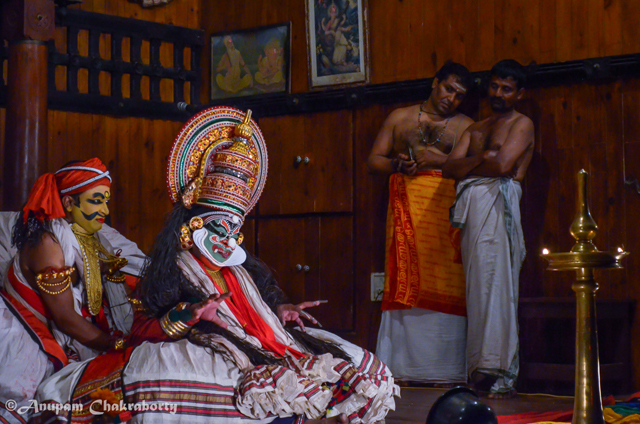 Kichaka died in the hand of Vallala 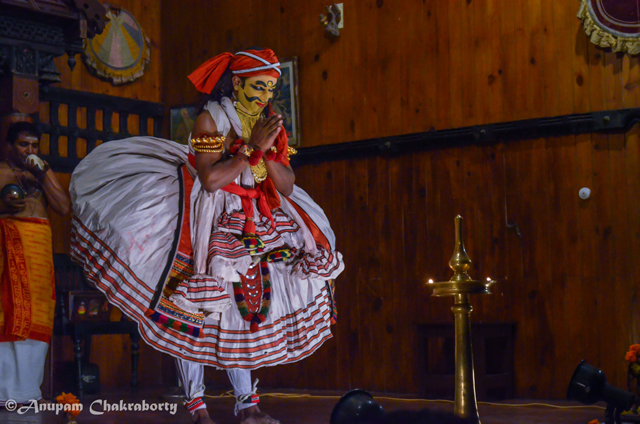 Sairandhri took her revenge through Vallala. With the win of Bhima (Vallala) the show ended.

The story was narrated through songs throughout the play and all the artists performed in classical Kathakali dance form. It was a beautiful theatrical experience with unmatchable ambience which overwhelmed the audience and left spellbound in the end.

A Day of Religious and Cultural Tour in Fort Kochi was last modified: March 5th, 2022 by Anupam Chakraborty