A memorial to Swamy Vivekananda stands on a rock surrounded by sea at Kanyakumari where he was presumably meditated on 25, 26 and 27th December 1892 before leaving for Chicago religious conference. It is the point of convergence of the three seas, the Arabian Sea, Bay of Bengal and the great Indian Ocean.

Swamy Vivekananda, the great disciple of Sri Ramakrishna Paramahamsa (the best known saint of India during 19th century) and the founder of Ramakrishna Mission, on his quest to know the purpose of life, wandered all over India after the death of Sri Paramahamsa Dev. He came to Kanyakumari on 24.12.1892 and later, participated in the World Religious Conference at Chicago on 11th September 1893.

In his letter dated 19th March, 1894, Swamiji wrote from Chicago to Swamy Ramkrishnanda (a disciple of Sri Ramakrishna) mentioned about Kanyakumari (formerly known as Cape Comorin) and his plan. He wrote –

My brother, in view of all this, specially of the poverty and ignorance, I had no sleep. At Cape Comorin sitting in Mother Kumari’s temple, sitting on the last bit of Indian rock — I hit upon a plan: We are so many Sannyasins wandering about, and teaching the people metaphysics — it is all madness. Did not our Gurudeva use to say, “An empty stomach is no good for religion”?

The long and the short of it is — if the mountain does not come to Mohammed, Mohammed must go to the mountain. The poor are too poor to come to schools and Pâthashâlâs, and they will gain nothing by reading poetry and all that sort of thing. We, as a nation, have lost our individuality, and that is the cause of all mischief in India. We have to give back to the nation its lost individuality and raise the masses.

(You can read his full letter here)

A true Sannyasi’s realization was far above the religion and it was nation first. In 1962, people of Kanyakumari formed the Kanyakumari Committee to build a memorial to Swamy Vivekananda on the rock where he meditated. There were many religious agitations and obstacles against the construction of rock memorial. But inspite of all those, Shri Eknath Ranadhe (popularly known as Eknathji. He was a member of Rashtriya Swayamsevak Sangh) succeeded in constructing the Vivekananda Rock Memorial with the donations from public and state Governments and central Government.

The memorial was inaugurated on 2nd September, 1970. 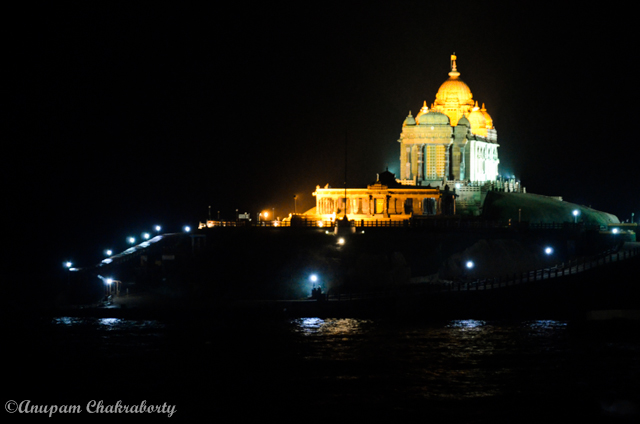 Kanyakumari is well connected with almost all the major cities of Southern India and getting there is quite easy. One can choose any mode of communication, rail, road or air, according to own preferences. Kanyakumari has a railway station and it is only 1.2 Km from the rock memorial ferry service. The nearest airport is in Thiruvananthapuram, capital of Kerala, which is at a distance of 86 km from Kanyakumari. It is also connected with an excellent network of roadways. 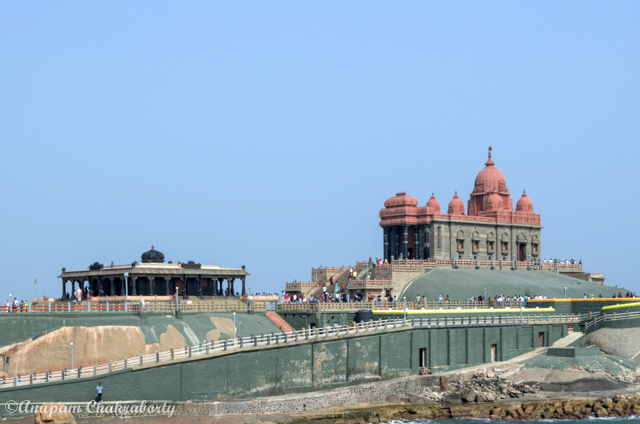 Small square structure on the left is Sri Pada Mandapam and Vivekananda Mandapam is on the right.

Those who have visited Belur Math, the Ramakrishna Paramhamsa temple, in Kolkata will find similarity in the look of Vivekananda Mandapam. The stairs of the Vivekananda Mandapam led us inside the hall, where under the dome we saw the statute of Swamy Vivekananda in ‘Parivrajak’ posture. We then entered into another hall of the same structure called Dhyan Mandapam. It is the hall for meditation. 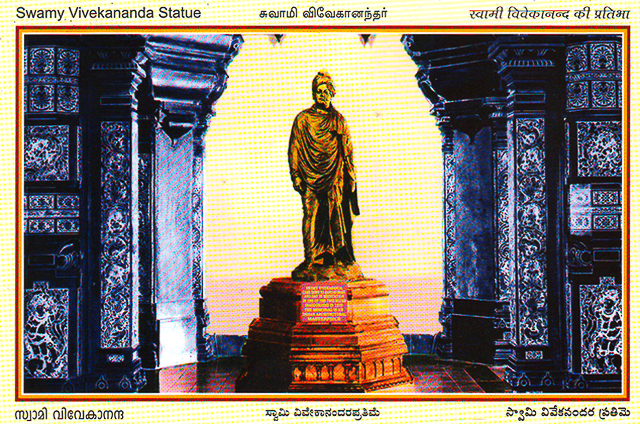 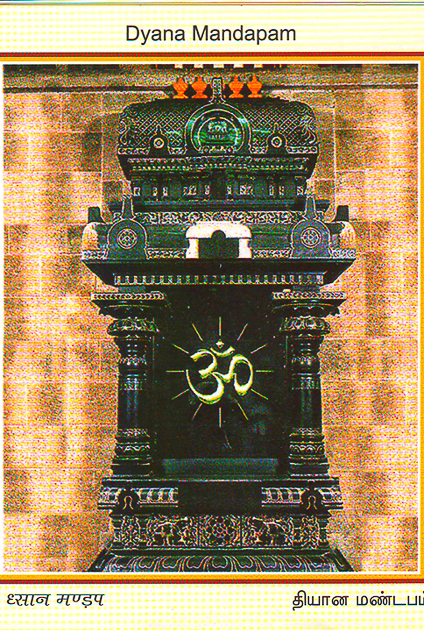 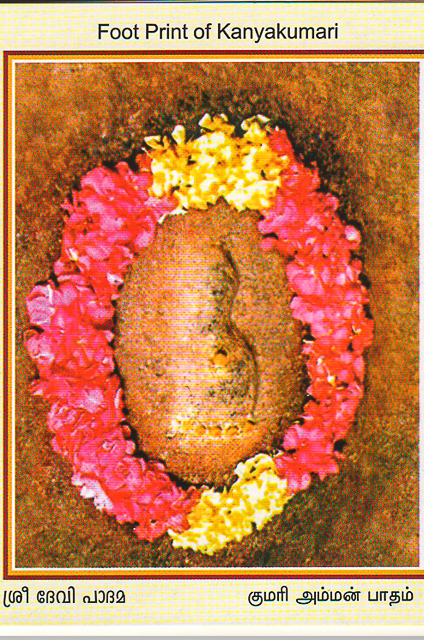 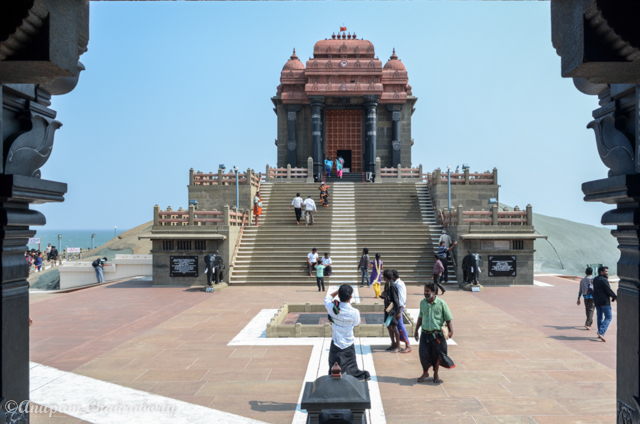 Visitors returning from the Vivekananda Rock Memorial were then taken by ferry to the next rock island where we saw the huge statue of Thiruvalluvar. During my first visit to Kanyakumari in the year 1997, I did not notice this massive statue of saint poet Thiruvalluvar. It was a later addition and inaugurated in the millennium year 2000. 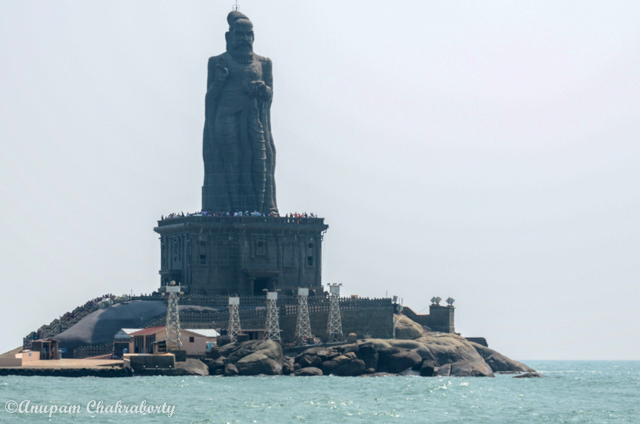 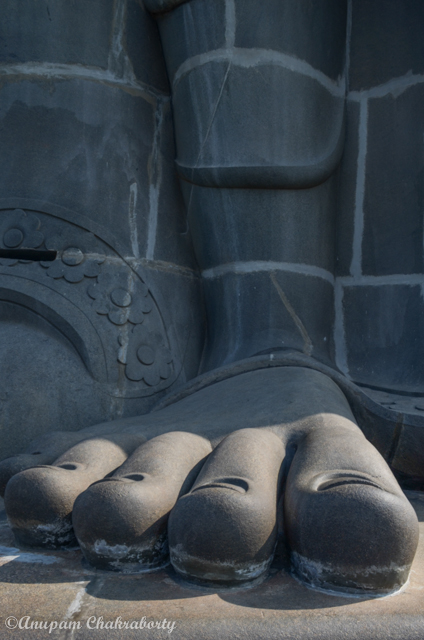 Kanyakumari is also popular for spectacular sunrise and sunset views on Sea. Here one can see sun rising from the sea and also setting into the sea. It was about 5.30 pm, the visitors started assembling near the seashore for seeing the sun setting into the Arabian Sea. Slowly it became a crowded area. All of a sudden there came a pick up in the business of the vendors who were selling coconut, tea and refreshments. It was a happy moment for them and for the visitors, a moment to gaze in the sky to witness the view of sunset. How wonderful it was to find a place for myself on a rock in the sea! I was standing there  with no one around and waiting  for a spectacular sunset view. But you need to have some amount of good luck to see such spectacular sunset and it was not with any of the visitors including me. However, we did see the sun going down into the Arabian Sea. 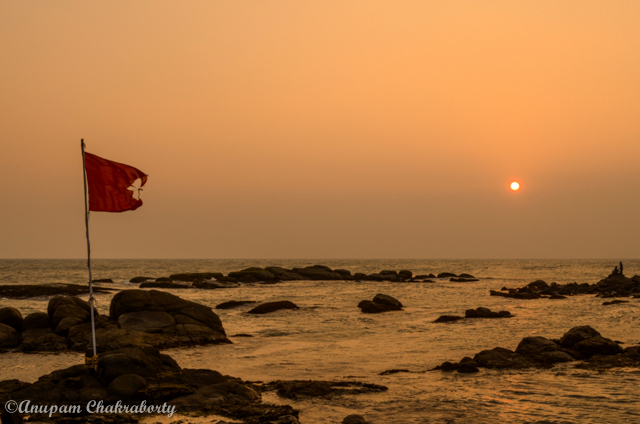 My wife and I came back on the seashore in the evening. It was a dark sea out there. I took my position. My wife, though knows little about DSLR camera handling, was extending all possible help to me. I was trying first time in my life, the night landscape photography. It was then all set to go. The lights glowed first on the Vivekananda Memorial and then on the statute of Thiruvalluvar! The lights remained hardly for few minutes and then went off. It was such a spectacular moment that we will remember for long. 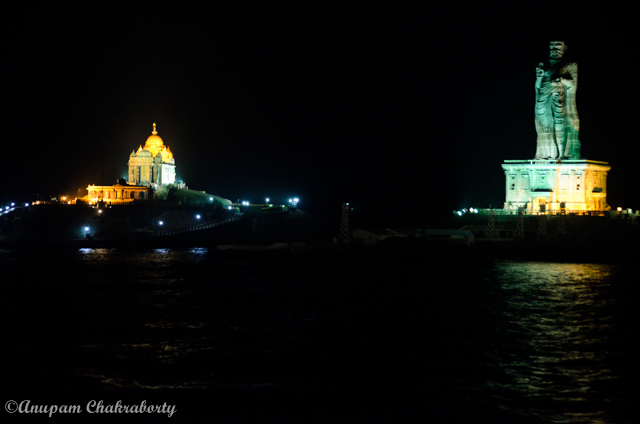 Night View of Vivekananda Rock Memorial with statue of Thiruvalluvar

Early morning at about 6 am on the seashore, I was waiting for the sun to rise behind the Vivekananda Memorial on Bay of Bengal. The sky soon became warm with burning glow but did not last long. The mighty Sun blew up the sky all of a sudden and appeared flat. There was no sunrise view. 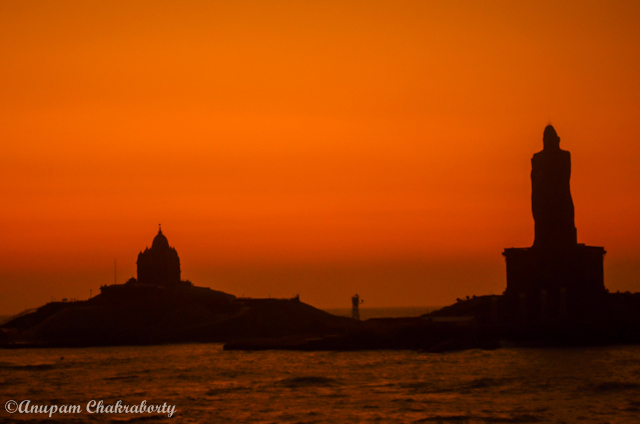 On the seashore locates the temple of Devi Kanyakumari, who is Devi Bhagawati in the form of adolescent girl. Devi Kanyakumari underwent penance on the rock island where Swami Vivekananda meditated. To enter into the temple male visitors need to remove cloths of upper body. 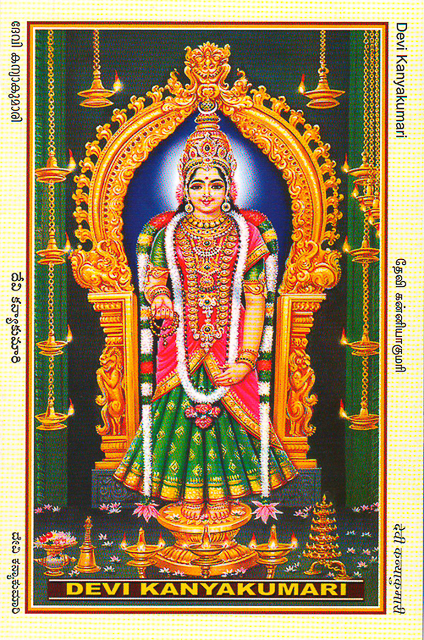 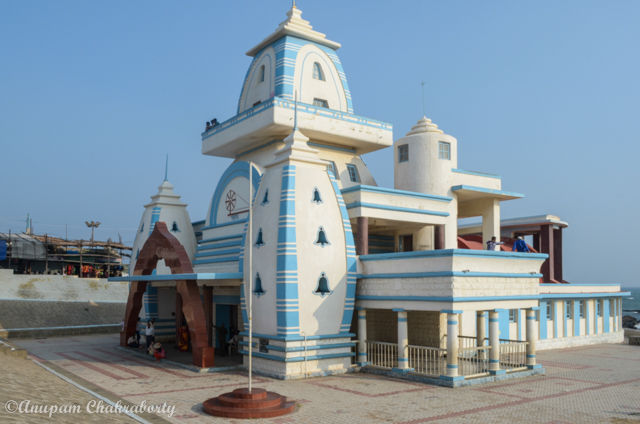 A person voluntarily guided us inside the memorial. He showed us a hole on the roof of the memorial through which sun rays fall on Gandhiji’s birthday, October 2nd, exactly on the place where the urn was kept. He further told us that the memorial’s central shape is 79 feet high which represents the age of Mahatma Gandhi while he died.

Inside the Gandhi Memorial 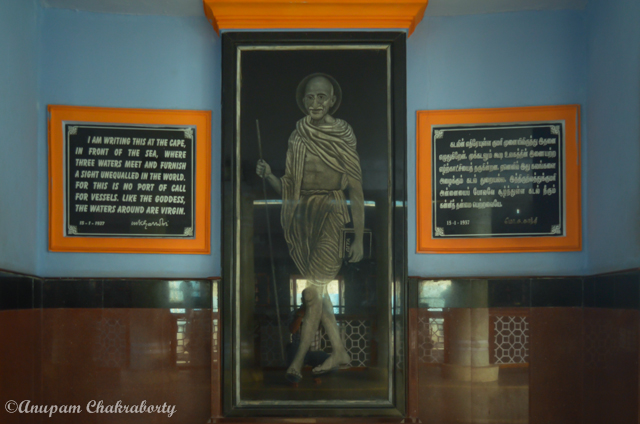 Image of Mahatma Gandhi inside the Memorial

To describe the unmatched beauty of Kanyakumari, Mahatma Gandhi during his visit to the place on 15.01.1937 wrote (you can see this written on a plaque inside the memorial)-

I am writing this at the cape, in front of the sea, where three waters meet and furnish a sight unequalled in the world. For this is no port of call for vessels. Like the Goddess, the waters around are virgin. 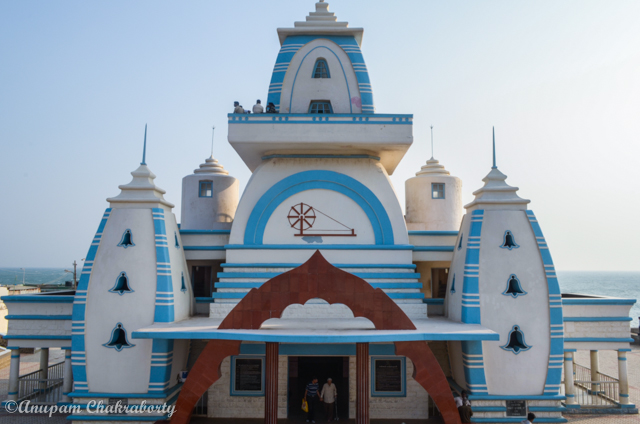 I first heard about Binsar, after my dreadful grilling by Club Mahindra marketing team, when I went to their sales office, to collect a…