To commute between the islands, Lakshadweep administration runs daily HSV (High speed vessels) covering major islands at a nominal price. We reached to the designated jetty and waited for our ship to arrive after buying tickets. It showed up around 10.30 AM, but did not come to the jetty. We were required to reach to the vessel through a small boat. So, boarding the small boat along with rest 20-30 passengers along with respective luggage and de-boarding at the ship all the ways took another 1 hour. It was a 2.5 hours journey to reach Kavaratti. There was full arrangement of entertainment on the board with high volume latest Malayalam movie, but we opted to sleep as it was more of a punishment for us, who do not understand a single word out of it. 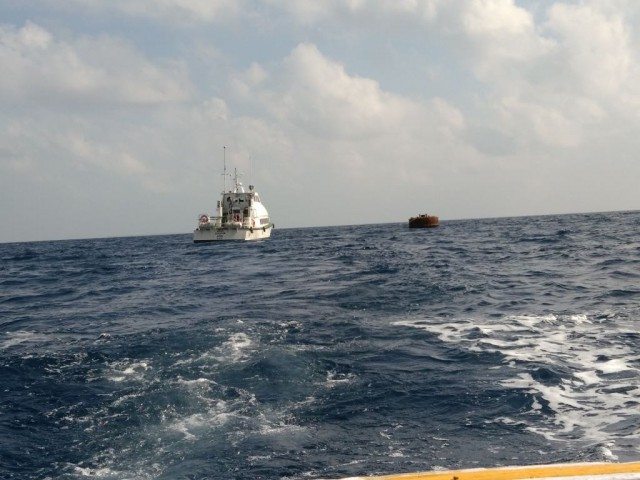 We reached Kavaratti, the Capital of this UT around 2.30 PM. This Island is quite different than serene Agatti, however there were no compromises on the nature’s magnificence. 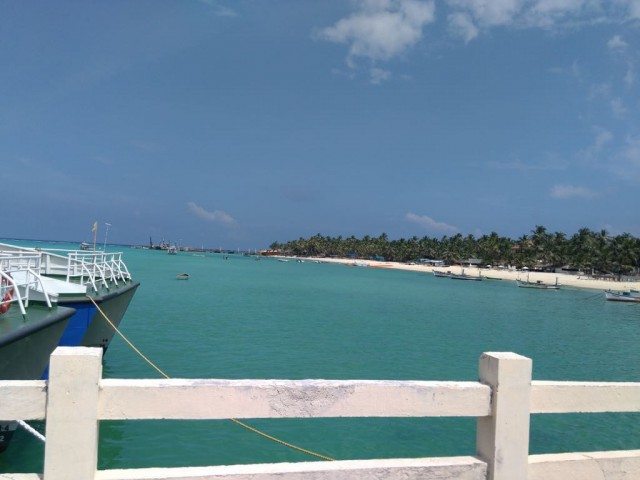 Here, you can find taxis and auto in abundance, offices, petrol pumps, shops, hospitals etc, in short everything a capital should have. We hired two autos and reached to our guest house, had lunch and took some rest after tiresome vessel journey. Rain is very unpredictable in Lakshadweep. When we got up, found, it’s raining outside. We had no options but to wait until rain stopped to undertake any traveling around the island. After 2 hours, it finally stopped and we all rushed outside. Kavaratti is big Island with Lagoon on one side only, and our guest house was situated on the other side of the Island. It was deep sea adjacent to the guest house; we went and sat at a distance for some time before proceeding to other places.

On enquiring about what we can see here, we have been told that Kavaratti is famous for the beauty under water rather than its beaches. Water activities like Scuba and Snorkeling are available here at very reasonable rates due to less tourist footfall and govt. control. Since such under-water exploration activities are best to be undertaken in bright sun, we kept it for the next day afternoon. We went to see the helipad first, which is located at the last point of the Island. Since it was getting dark by then, there was hardly anything we could appreciate due to low visibility. Next was the Beach Road, it is good constructed road along with lagoon side beach area. It was a memorable experience to drive along the sea. There, we found an awesome cafe, ‘Cafe De Sena’ which offers tasty Cold coffee with ice-cream along with marvelous beach view and cool breeze as extras. I had a glass of Coffee and promised myself to have another during day time, so that the beach view of this cafe can be experienced perfectly, before leaving Kavaratti. Next Day, we went for the morning walk to the beach road, which is on the lagoon side of island and captured the natural beauty of Kavaratti. 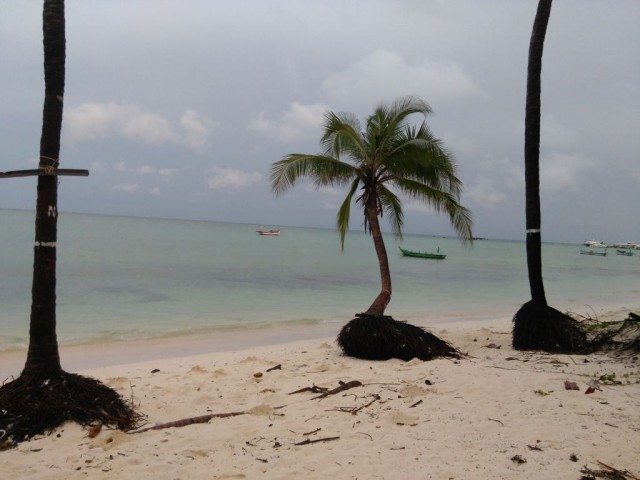 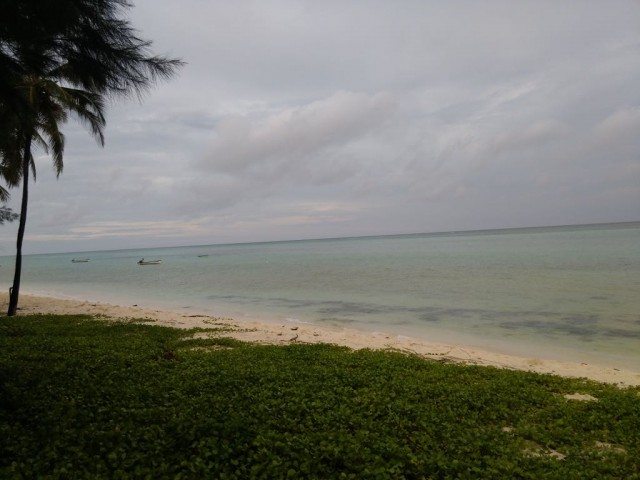 We asked our Taxi wala to cover Marine Aquarium & Museum, Water desalination plant and Light house jetty in the first half, so that during afternoon we can go for snorkeling. Due to power failure that day the Museum was not operational, so we visited Water desalination plant. After this visit, I understood, how fortunate we land people are, where rivers are full of potable water. Island people need to work hard to convert potable water from saline sea water. The input output ratio is 100:1, only 1 litter water can be made potable out of 100 litter of sea water with the cost of arrox. 25 paisa per liter. The big black pipes seen below are used to take water from sea, 300 meters away from shore and 300 meter under sea. The other pipes are used to return processed water back to the sea. It was a state of the art plant, which runs 24*7 and supplies water throughout island. One PWD officer explained the whole process to us in very detailed and also told us that Lakshadweep administration established such plants at every habited island. 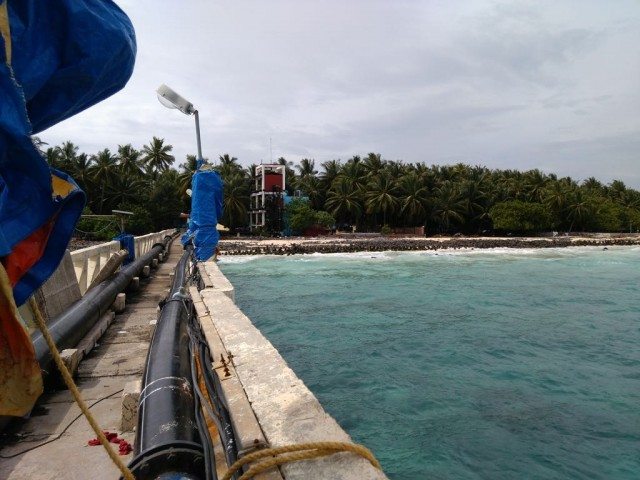 Then we went to the same cafe and had my pending Cold coffee with ice-cream. The jetty near to light house we visited next, and spend excellent time watching variety of fishes in the deep sea. Lots of local people were found busy in catching fishes on this jetty. 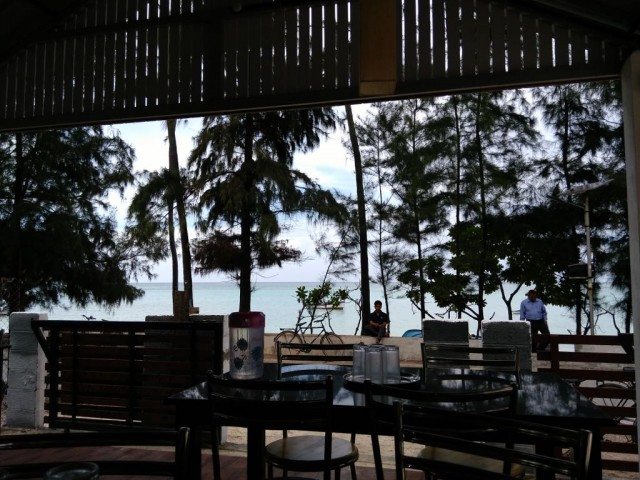 View of beach from the Cafe 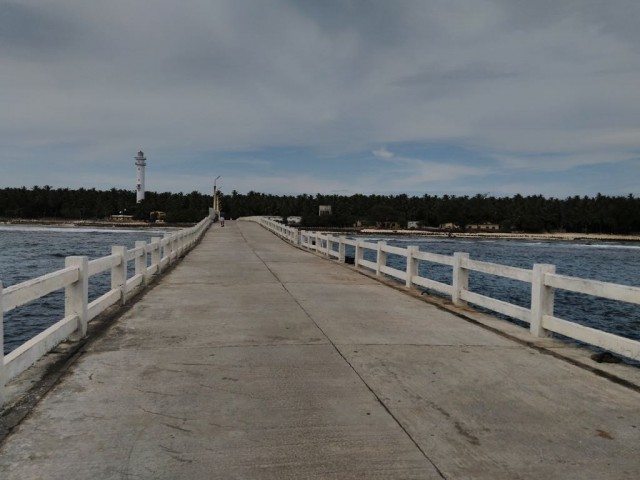 Now it was the snorkeling time, so reached at the SPORTS water sports center at the beach. Small kids are not allowed to do such activities and we had a child with us, so we decided to do it in batches. I and husband got ready first, leaving daughter and parent at the beach. Initially, I was keen to do scuba diving, but when I got to know, the kind of sea creature we could see in both scuba and snorkeling is no different in Lakshadweep due its uniquely rich marine life in shallow water and coral reefs; I decided to do to snorkeling instead of scuba. The only disappointment was non-availability of underwater diver photographer that time, due to which the whole experience under water could not be filmed or clicked. 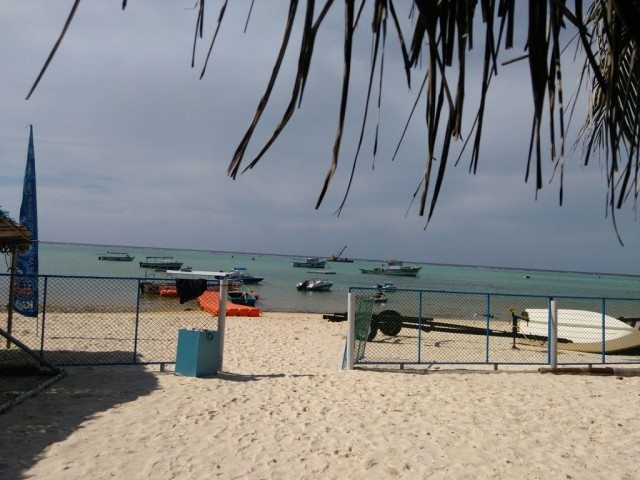 SPORTS has a fleet of showers and changing room besides the centre, where u can change and get ready. We have been given life jackets, and the equipment containing glasses, nose cover and a pipe. Then they briefed us about how it works. The upper part of body where the life jacket is tied up will be floated on the water. Our eyes were covered with glasses, nose was blocked and we needed to breath from mouth. The mouthpiece was attached to a pipe, which was long enough to be above the water level. 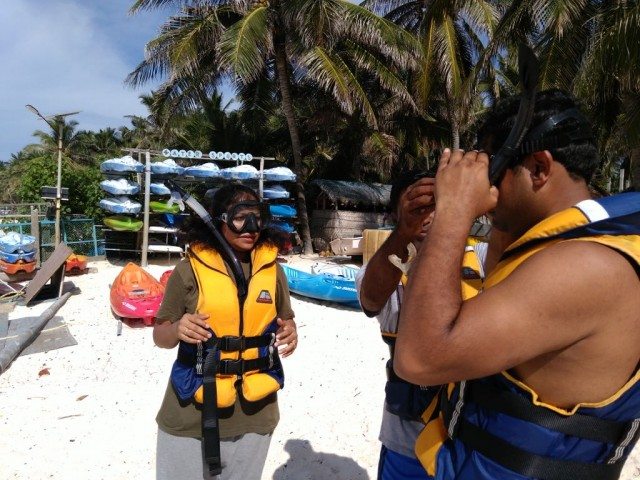 The boat took us in the middle of the sea; we were six people on the boat including four professionals from the crew. The destination was a huge coral atoll, big enough to peep out of the water level of sea. One crew member jumped on it from the boat, and made the anchor arrangement to make the boat steady. We both were accompanied with our respective trainers. After a small trial, we went inside the water. I put my head under the turquoise water and wow….it’s a new world all together. For a couple of seconds I forgot to breathe, as I could not believe what I just saw. There were thousands of fishes, of various colors, sizes and types, swimming all around. I saw numerous sea creatures and touched few of them; they were completely harmless. The colors inside the sea were strikingly gorgeous. We saw huge coral rocks of various colors, where these creatures live. Coral reefs were appeared to be beautiful multistory apartments sort of structure. It felt like, clown fish stays on the first floor, whereas black fish and sea anemone were neighbor and lives on the top floor with balcony on red coral residency. After exploring here and there for about half an hour, my trainer, who was carrying a packet of bread, opened it. It was complete ruckus then; huge numbers of fishes came so close to me to eat food. I seriously do have words to explain what it felt to be at such place. You need to go yourself to feel it. It was an ecstasy; one should experience this at least once in lifetime. Apologies for no pictures here due to the reasons I explained above.

Now the last we were to cover was Kavaratti light house. It is tallest light house in Lakshadweep and open for general public daily 5 PM to 6 PM. We bought tickets and started climbing up the 200 odd stairs. 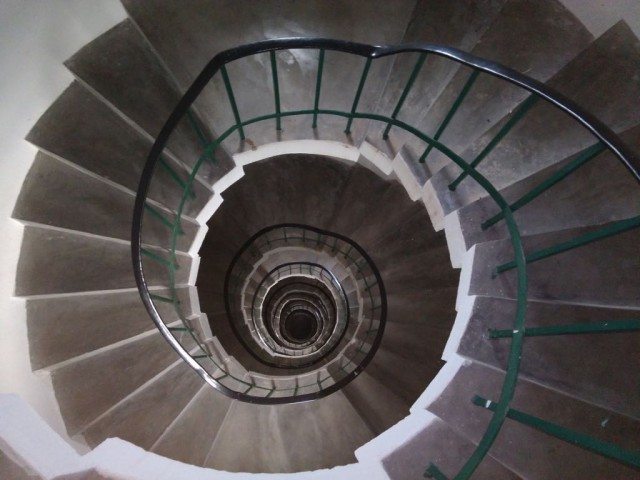 When we reached on the top, all we could see was either vast sea or the coconut tree tops. From down at land, Kavaratti has roads, houses, shops, offices etc, but from the top above, it’s just coconut trees, nothing else. 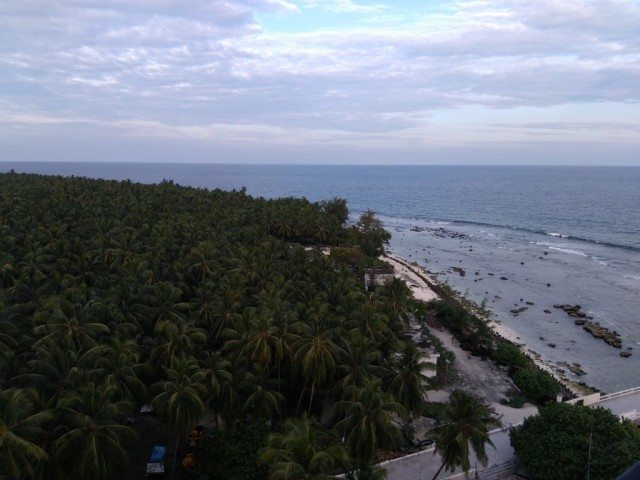 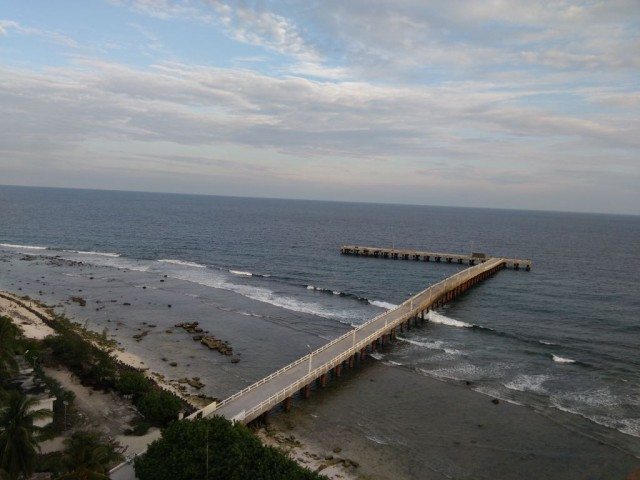 After this fulfilling day, we returned to our guest house and retired to our beds. Next day, we had flight back to Bangalore from Agatti, so we took HSV from Kavaratti to Agatti. This time they showed a Hindi movie on board, so we enjoyed throughout. The frisking and scanning at Agatti airport are very stringent to avoid any corals smuggling, so it took a little longer before we boarded the aircraft.
Lakshadweep is a hidden jewel in the Indian tourist map, whose beauty is at par or more, compared with any other expensive/exotic foreign location. The best part is we Indians can enjoy this without spending in dollars. With heavy heart, we bid final goodbye to Lakshadweep and flew away. 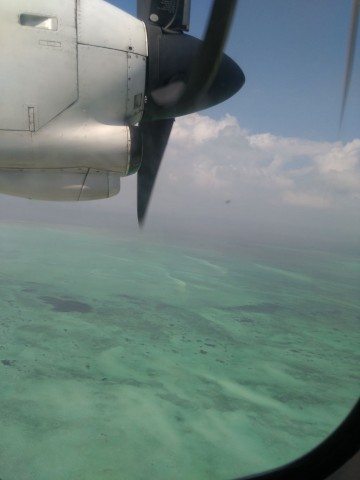 Flight back from Agatti

It was beginning to get a bit dark, so I thought it would be better to get back to Moradabad, and thus, I ask…