Kuala Lumpur – pride of Malaysia, the city of twin towers, a mirror of neoteric urban Asia.

It was yet another business trip. Always try to spare at least one weekend for any new place I visit, not possible in all the cases though (ahem…). This time it was in KL, as Kuala Lumpur is popularly known as.

Had almost two days at hand; after an hour of late night googling, this was my succinct itinerary.

Had a lunch with my clients on Saturday, so my time started from that afternoon only. Because of so restrained time availability burrowing more was not viable.

My accommodation was arranged at Hotel Crystal Crown, Petaling Jaya (http://www.crystalcrown.com.my/petalingjaya/). Decent hotel, good service, reasonable food, comfortable room, sufficing WiFi, ample options in the bar – adequate for a solo traveller like me. However looking at the guests I felt that the hotel is quite popular to the family crowd as well.

After lunch I was thankfully dropped back to my hotel, changed my rig and got out without wasting any more time. I was in that area for 5 days now, so gradually became familiar about the nearby whereabouts.

In KL, you don’t usually travel by taxies – they might ruin your full timing plans, no calculated and assumed duration is secured enough unless you are traveling in very odd hours at night. Needless to mention the extra bucks you spend for exercising the luxury.

My today’s destination is The Twin Towers, and the proximities.

I took MRT train line from my nearest station – Taman Jaya. MRT stands for Mass Rapid Transit, well, forget the name – it is similar to the Metro train we have here in various cities. But of course, much more organized, punctual and well managed. 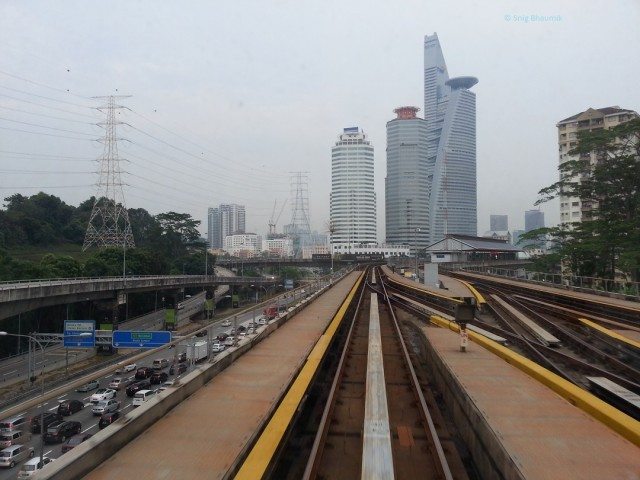 On the way in MRT

I crossed nine stations, and got down at the KLCC station. This is the station where you need to disembark for going to the Twin Towers. KLCC stands for Kuala Lumpur City Centre. Like many other cities, the MRT train also travels sometimes above the ground, sometimes underneath.

KLCC station is, however, under the ground. As soon as you go up from one of those exit stairs, suddenly you feel so tiny. The station is located almost beneath the towers, and when you clamber up, you are welcomed by those colossal structures. 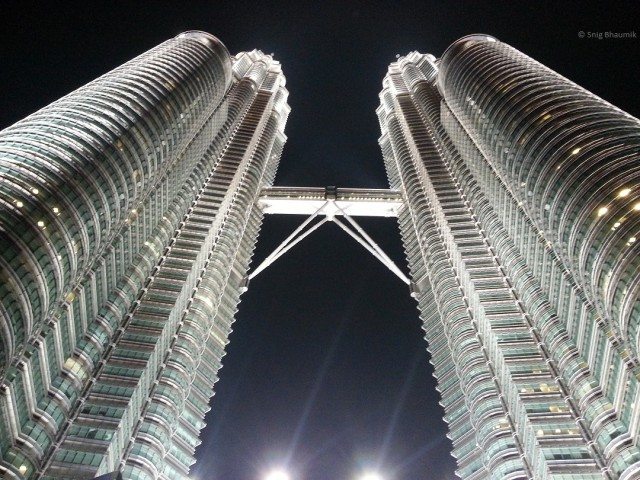 Twin towers – from the bottom-most possible

The construction of the superstructure was started on 1994 and finally was opened for public on 1999. However, most of the construction was finished by 1997. 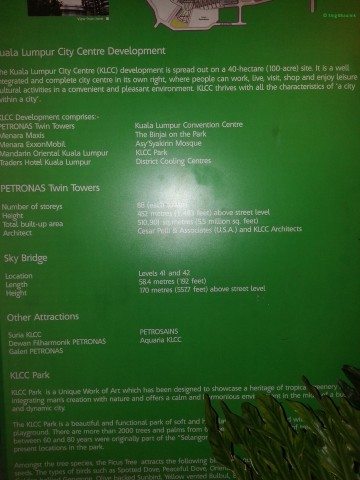 Essentially there is nothing much to do around the twin towers. Apart from of course taking lots of photographs, of the imposing twins and of yourself – around those twins. The whole walk-area and lounge is overflowing with tourists, each of them trying to get the best angle, struggling to pose by standing just in the middle of the twins.

You can of course get into the towers, go upto the skybridge, visit the observation deck – which I had settled to do on Sunday afternoon.

The ground floor and basements of the tower is KLCC – the City Centre with big shopping area – named Surya KLCC. Place with all biggest international brands, enter if you have a pretty heavy pocket to wipe out. 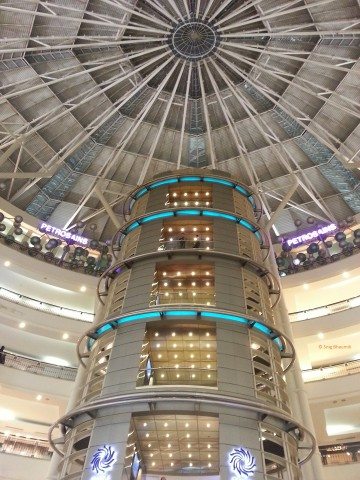 Apart from all standard shops, one outlet particularly interested me, Candylicious.

The place is all about candies, various and numerous types of candies. Unequivocally a shop the kids will fancy the most. 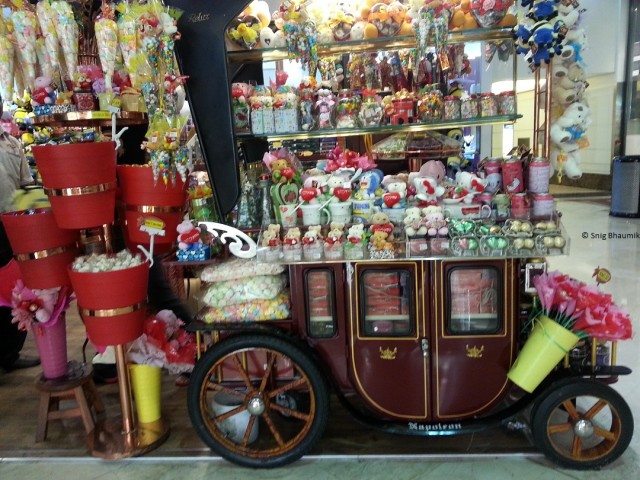 I didn’t however spent much time there. Had to visit the well exalted downtown area of KL. My destination now is Butak Bintang shopping area.

MRT again, intermediate destination is KL Sentral station. This station is essentially the hub of all the train and bus routes. I transferred myself from MRT station area to the adjoining Monorail station – a couple of minutes’ walk. Here the train route map which you would take for traveling to similar courses. 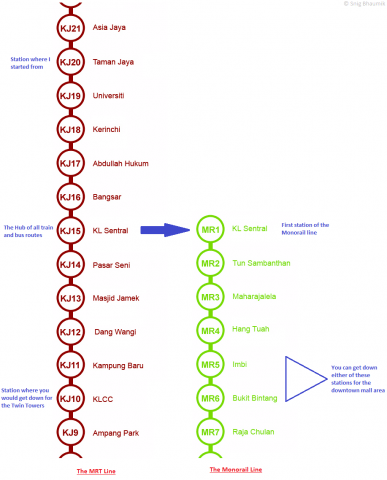 I acquired a return ticket in monorail to Bukit Bintang station from KL Sentral. A quite tiny vehicle the monorail is, having only two compartments; instantly choked with upbeat shop-alcoholic and peppy tourists. It was a Saturday night, but looking at the patrons it didn’t appear that the situation will be otherwise in the weekdays also. Not a single commuter there looked like a local resident.

As soon as you climb down from the monorail station, the stimulating spirit of the hamlet engrosses you. Sparkling lights, brimming people, posh cars, contemporary buildings, really twenty-first century metropolitan ambience. 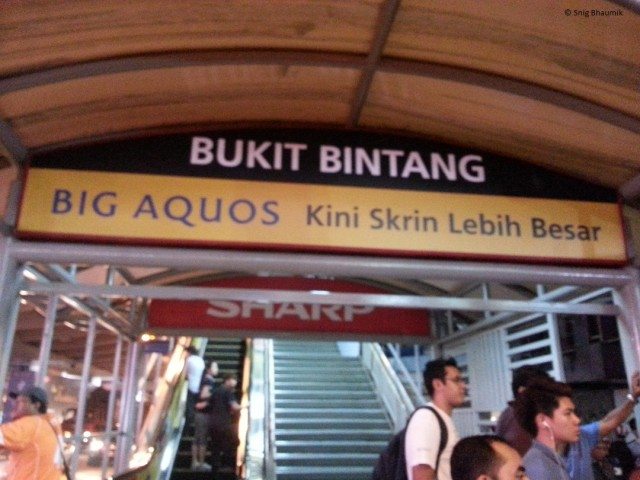 Lots of shopping malls are scattered in the vicinity to satisfy your shopping hunger. I would try to list some of them, and some of their USPs.

Arguably, one of the most popular shopping area in KL. Come here for all types of cloths, computer accessories, traditional Malaysian stuff and what not . Sungei Wang and Bukit Bintang Plaza are essentially two separate establishments, but they are so well integrated one can hardly notice entering and exiting any one of them. 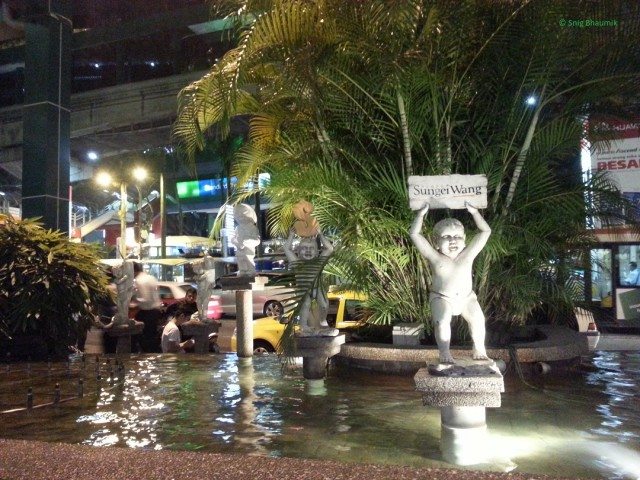 This building houses Asia’s largest indoor park – Cosmo’s World Indoor Theme Park. And if you are worried about the latest Hollywood movie is being missed while you are travelling, you have nine screen Golden Screen cinema here with IMAX 2D and 3D. 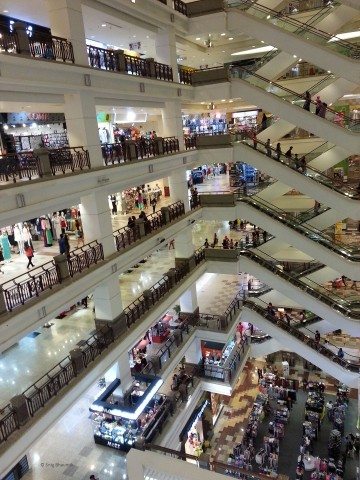 Inside the Times Square

Come on you gadget crazy people, this is your home. This 12-storey building only hosts gadgets, gizmos, electronics and IT products from all over the world; however of course beware of those duplicates. The plaza located just opposite to the Birjaya Times Square.

The Bukit Bintang area has a lot more to offer, lot more to visit for shopping, hanging around and of course for food. Some of the places in this “mallscape” I could not visit are Fahrenheit 88, H&M Lot 10 etc. Come prepared with lots of time at hand if you want to explore all.

I took the ride back to KL Sentral by the monorail, and to the Taman Jaya station from there by the MRT. Keep a few small denominator currencies in your sack, most of the train fares are around 1RM to 2RM (Malaysian Ringgit).

Tomorrow morning will go to the Batu Caves. Will have to wake up early.