Our visit to Horanadu Annapoorneswari and Kalasa temples earlier in the day, successfully completed the round-up of all the temples we had aimed to cover in our tour of Karnataka. The return journey back to Mangalore, 125 kms away, awaited us. We started from Kalasa at around 1.30 pm and proceeded towards Kudremukh National Park, our next destination, 20 kms away.

On our way to Kudremukh, we happened to spot this beautiful little Ganapathi temple amidst lush green tea gardens at a village named Samse, 6 kms from Kalasa. We spent some time admiring the temple and the beautiful tea plantations around it. It seemed a popular halting spot on the route with a lot of tourist vehicles already parked there. There was a shop selling tea packs and one could see the tourists flocking the shop to taste the local produce. 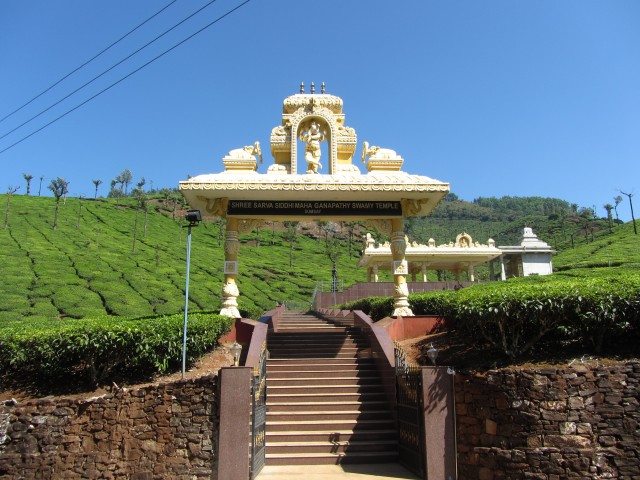 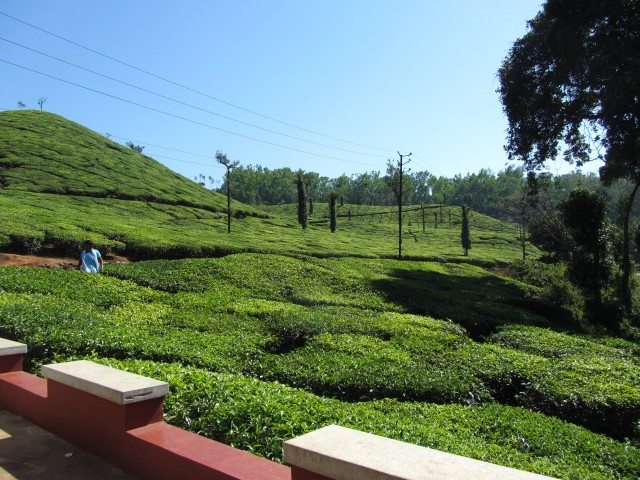 We drove further and a km later, reached Kudremukh National Park Checkpost. On giving the details of our vehicle and its passengers to the officer at the checkpost, we were issued a receipt indicating both our entry time and the time by which we had to exit the park at the western side of the reserve. Cars like our Indica are given 90 minutes to reach the other side of the park, a distance of 40 kms . This exit time is needed to be strictly adhered to by the tourists failing which a penalty is levied. 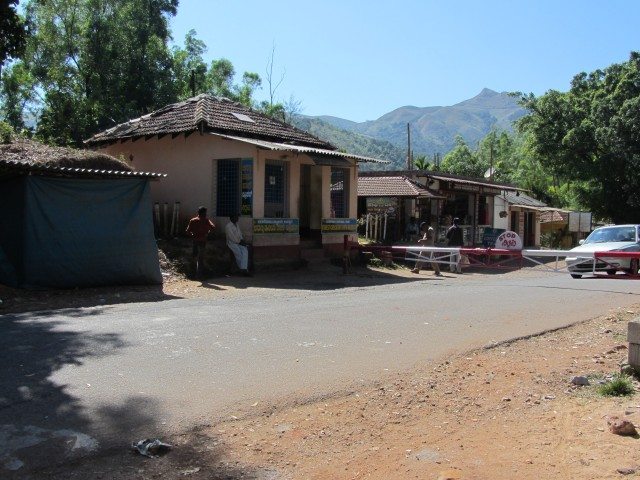 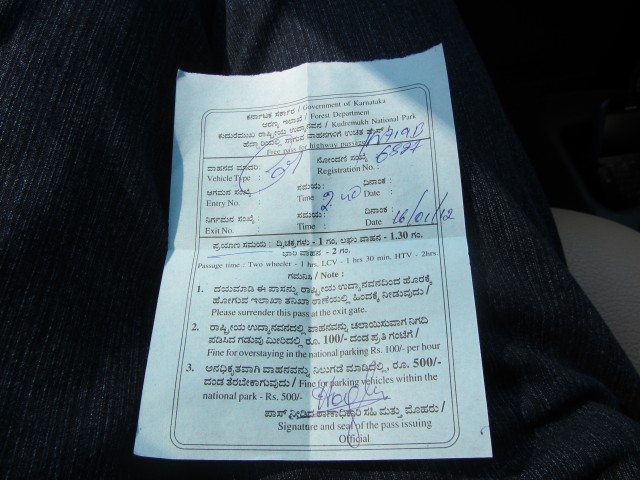 Kudremukh National Park is the second largest protected wildlife area in the Western Ghats(around 600 sq.kms). Recently this park has been declared as a Tiger Reserve by the Environment Ministry of India. “Kudremukh” means “horse-face” and the place got this name because a view of a particular side of the mountain resembles the face of a horse. Three important rivers of Karnataka, the Tunga, Bhadra and Netravathi are said to have their origin in this area. Like many mountain ranges in the Malnad region of Karnataka, Kudremukh National Park is one of the hot beds of trekking activity. There are some 13 trekking routes inside Kudremukh park, with various degree of difficulty.

Ten minutes into the drive inside the park, we found this hanging bridge over a river(Since both river Tunga and Badra flow inside the national park boundaries, I wasn’t sure of the name of the river). There were no souls in the vicinity apart from us and it was a bit eerie to be standing on the bridge with nothing but the sounds of the bird for company. After the mandatory snaps, we moved on towards Kudremukh town. 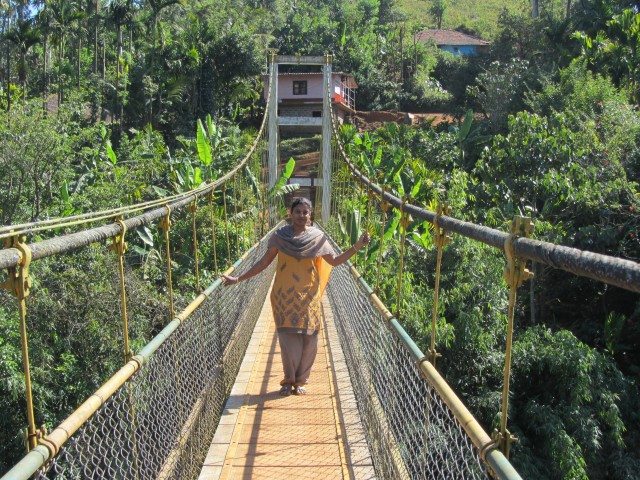 Kudremukh town, at the halfway point of the National park route is primarily an iron ore mining town, where the Kudremukh Iron Ore Company Ltd(KIOCL), a public sector company, operated till the last decade. The iron ore mined in  Kudremukh was transported through pipelines to Mangalore, 100 kms away. Facing the wrath of environmental activists, the factory situated in one of the most sensitive biodiversity hotspots of the country was permanently shut down in 2005. 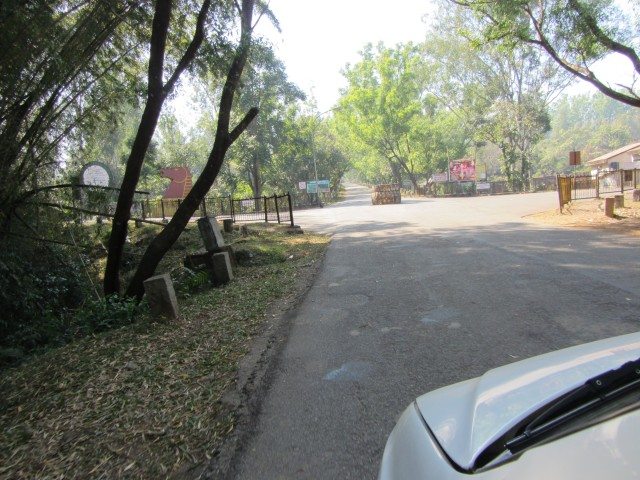 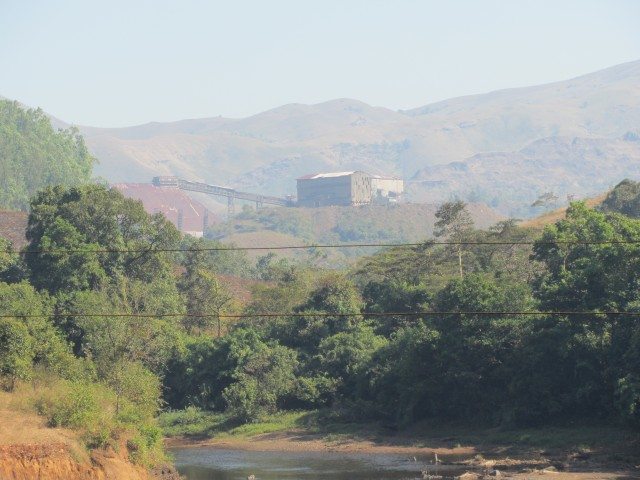 KIOCL factory as seen from a nearby bridge

A beautiful spot just past the factory area

Just after Kudremukh township, there is a deviation to the right from the main road which leads to Lakya Dam. The dam was constructed to collect the sludge ie the waste from the mining operations, so that it did not flow downstream. Acres of beautiful shola forests were destroyed to build this dam. The dam situated in a backdrop of breathtakingly beautiful shola mountains, classically illustrates the tale of human greed over Mother Nature. There was a lone check post at the entrance to the dam and couple of policemen kept watch over people who visited. I heard that the damsite was a much sought-after picnic spot by the workers and their families during the heydays of the factory. We left after managing to sneak some photos of the dam. 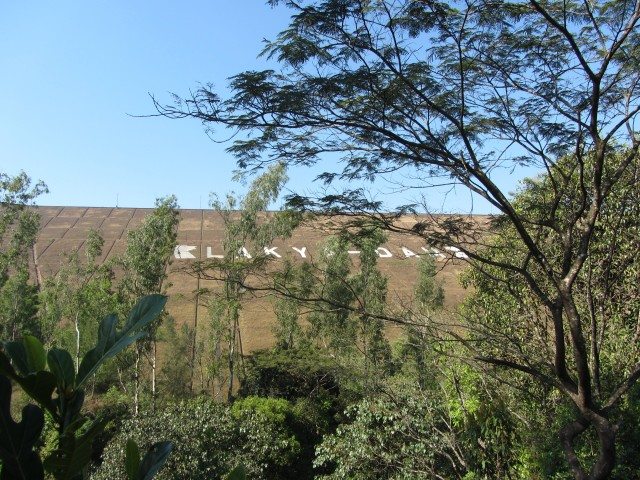 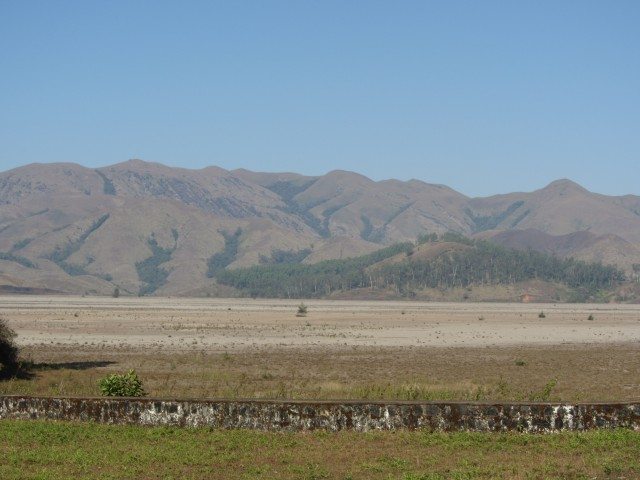 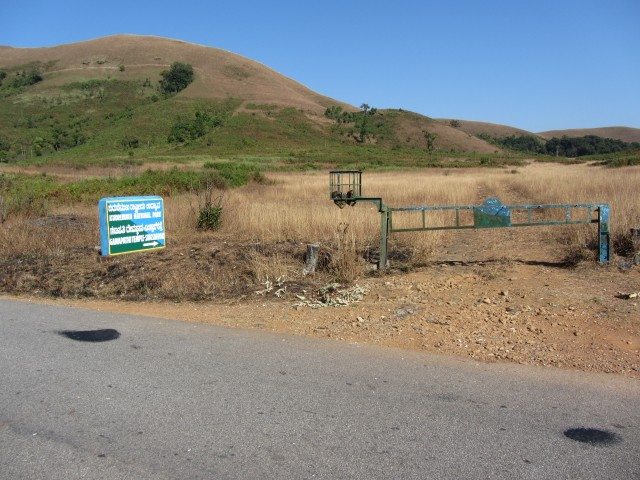 One of the trekking paths inside the park !

Then followed one of the most beautiful stretches of the drive with stunning vistas on both sides. We repeatedly stopped to click pictures. 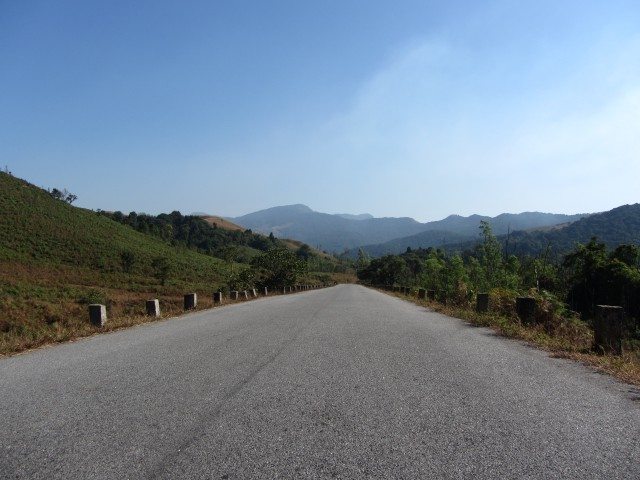 We reached Kadambi falls, which can be viewed from right on the main road. But the water level was almost negligible and we moved on. 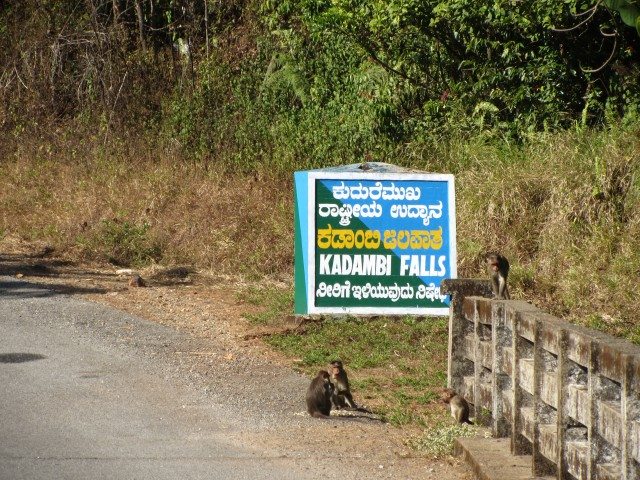 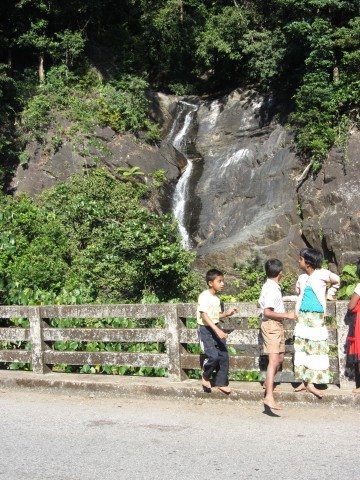 Our next stop was Hanumangundi falls (Also known as Soothanabbi falls) 18 kms from Kudremukh township. This is one of the famous waterfalls of the region. Rs.20 per head is charged as entrance fees to the falls. The falls is beautifully maintained by the Forest department with nice concrete steps constructed from the entrance till the base of the falls. Also, proper railings have been provided at the base of the falls for safety of the tourists. According to the officers at the falls, time of exit from the national park is relaxed by 1 hour, if the receipt for entrance fees paid at the falls is produced at the second checkpost. As expected for this time of the year, the flow was limited in the falls. Still, it is a nice place to have a cool bath and relax if you or on the way to Sringeri or Horanadu temples. 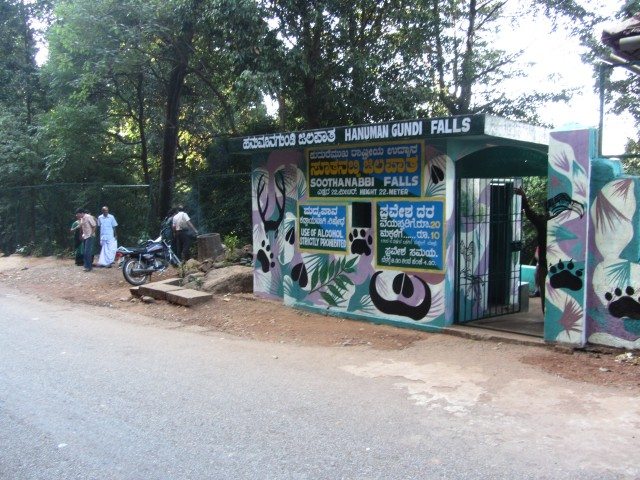 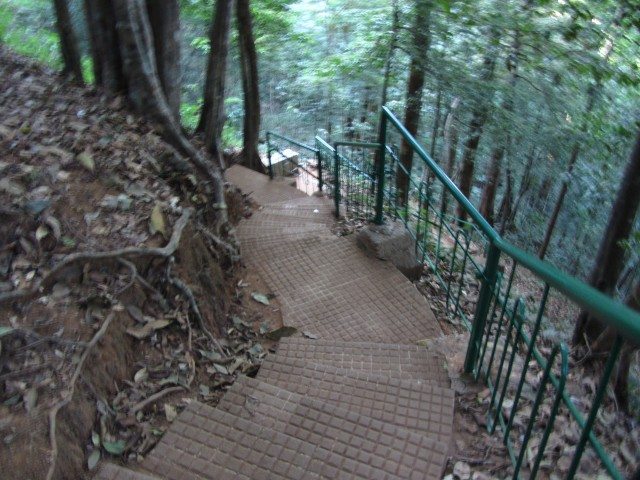 Neatly constructed steps right down to the base of the falls 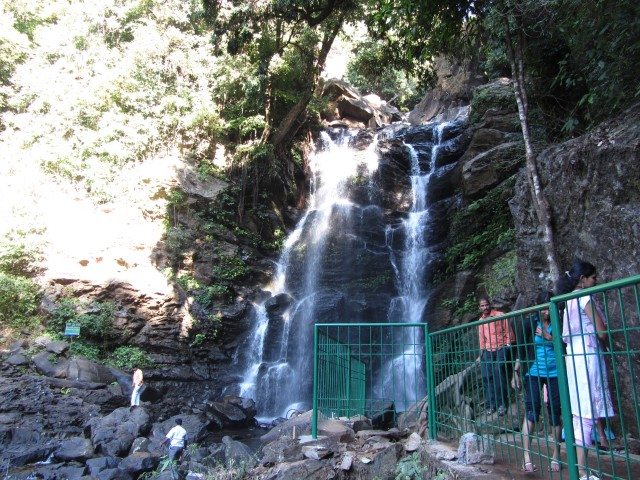 At the end of the steps, the view of the falls

We reached the Checkpost on the other side at 4.30 pm, which meant we had spent around 2 hours inside the park, including the visit to Hanumangundi falls. On the suggestion of our driver, we purchased some delicious locally made biscuits at the checkpost. 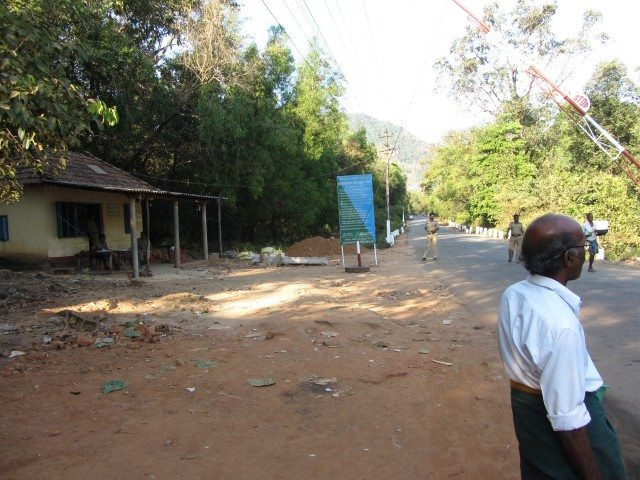 Kudremukh Park Checkpost on Karkala side

From here, my wish was to head straight to some beach near Mangalore to cool off till the sunset. But my wife wanted to visit Durga Parameshwari Temple at a place called Kateel(some of her relatives had apparently visited this temple and raved about it). Though I had enough  darshans in the last 3 days to last a year, I had to give into the wishes of the “high command” and so Kateel it was, we were headed to. To be fair to my wife’s relatives, the Durga Parameshwari Temple at Kateel(30 kms from Mangalore) turned out to be a pleasant surprise. It is situated on an island in the middle of river Nandini, surrounded by wonderful greenery. Though the water level in the river was very low, this temple must be a sight to behold during the monsoons. 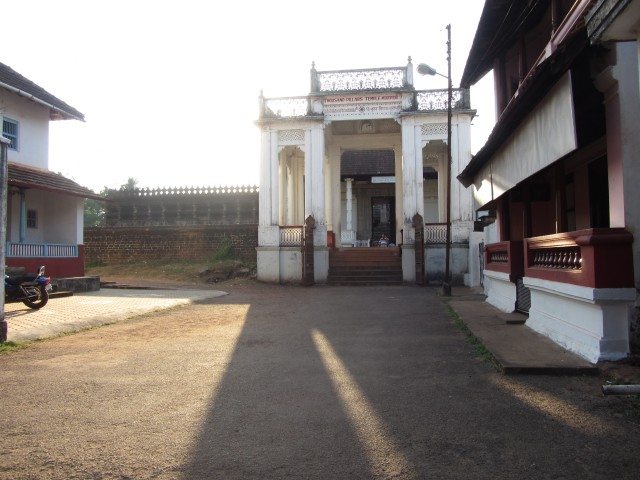 A snap of Thousand Pillar temple, Moodbidri, on the way to Kateel 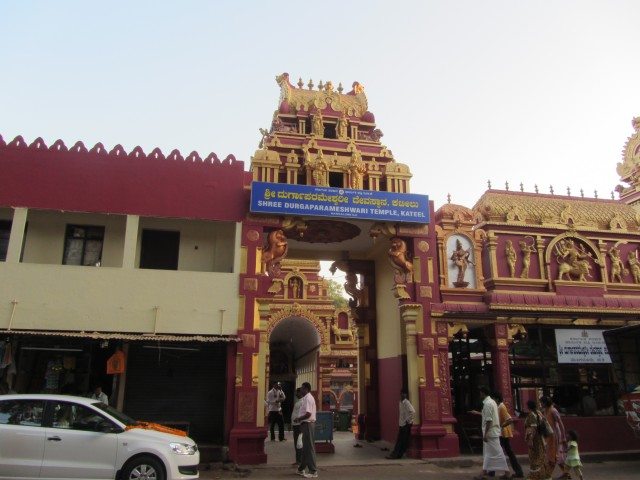 Although it was already 6 pm and Thannirbhavi beach near Suratkal, was still 25 kms away, I insisted on visiting the beach. Heavy traffic and hilly roads meant that we reached the beach at 6.45 pm, well past sunset. It is the most beautiful beach in the vicinity of Mangalore City and we had a relaxing time resting our tired bodies after a long, eventful day. 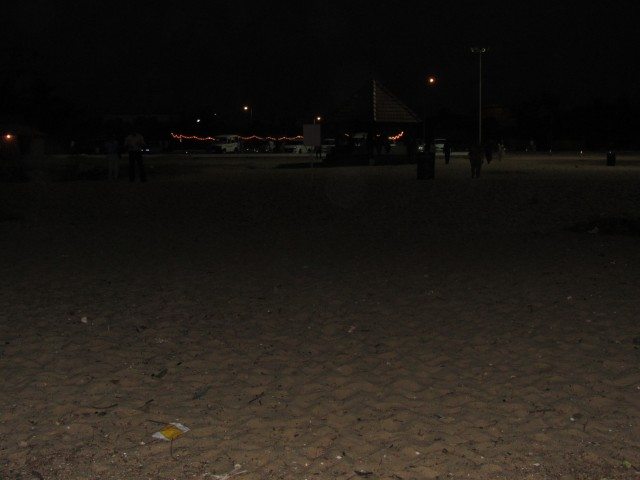 A tad too late for Thannirbhavi Beach, Mangalore

From the beach, we headed straight to Mangalore city, had our only Non-vegetarian dinner of the trip (Kairali Restaurant near Mangalore Railway station provides the best Kerala style non-veg food in the city). We boarded the West Coast Express and reached our hometown, Tiruppur, the next morning.

For those who haven’t had a glance of the previous logs of this Karnataka trip, here is a brief summary:

The plan for the next two days was to visit Pangong Lake. It is situated at a height of about 4250 m (13,900 ft) and is 134 km long. It extends from India to Tibet and two thirds of the length the lake falls in China. The distance from Leh to Pangong is nearly 160 kms, and it takes 6-7 hours to reach. The roads have been well kept, but do get messy in between due to mountain slides and constant water flowing from the hills.

The drive is quite scenic and during the entire trip, not more than 50-60 cars passed us from the other side. A permit is needed for the journey and the same is verified at 7 check posts at various passes. Dorje had it all arranged, all we needed to do was relax in the car and enjoy the journey!

We started at 9 am in the morning and crossed Shey,Thiksey village and left all signs of inhabitation behind us with the beautiful hills and the long road for a company. As we started climbing up the hill, the temperature began to fall. We did see few small villages en route. On getting out of the car at Changla Pass, the third highest pass in the world (5270 m./17,300 ft.), we could actually feel the chill in the air piercing through our skin and lack of oxygen made breathing feel like an exercise. This was the highest point of the trip to Pangong.