So it all started on 1st September 2010. After months of planning and praying to the rain gods My friend Adhiraaj and i boarded metro from Noida to I.S.B.T Kashmere Gate. Took a 9.30 pm semi deluxe bus (Fare Rs. 230/- each) from Delhi to Haridwar. We reached haridwar around 4.00 a.m and went to the Bus Stand to inquire about the bus for Joshimath / Badrinath because we wanted to reach Gobindghat by end of the day (2 Sep 2010). And there we were, no counters, no information, so we inquired from the locals and they directed us to the office of a travel agency G.M.O.U Ltd. We took their bus leaving for badrinath at 5.00 a.m and bought tickets till Gobindghat which comes 23 kms before badrinath. (Fare Rs. 270/- each) If you want to enjoy scenery take the right window seat of the bus and that’s what i got but in the last row and i knew the whole rides gonna be bumpy. The driver hopped in, breathing life in the engine so as to give us breathtaking view all the way. 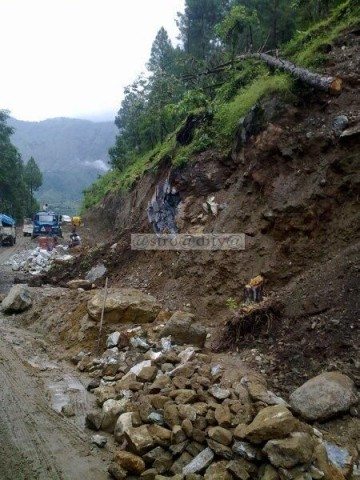 BRO working hard to clear the road after a landslide

After a brief stop of about 15 mins as BRO workers were clearing the road, we started again and our next stop was pipalkoti. We got off of the bus had a quick bite and managed to click some pics. 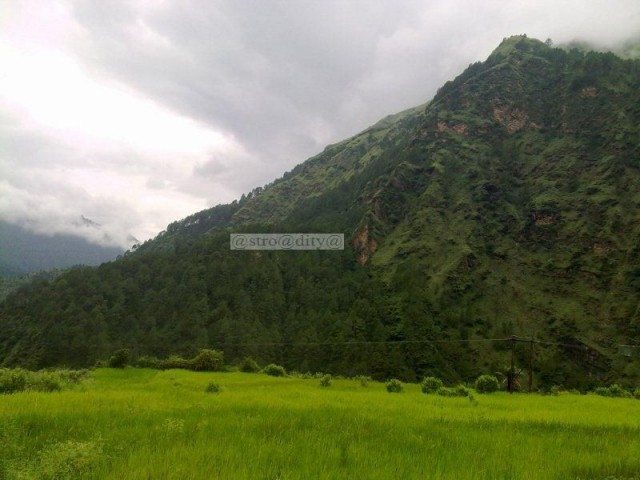 Around 2.30pm after crossing  Rishikesh, Devprayag, Karnaprayag, Nandaprayag, Pipalkoti we reached Joshimath and as expected the gate was closed. And it was a bit frustrating as our destination Gobindghat was just 22 kms away and the gate was scheduled to open at 4pm. So we just got off the bus, had some tea and went to the temple nearby which is home to Lord Badri in the winters as the temple at Badrinath is closed. After some wait, the gate opened and we started again. Finally around 5pm we reached Govindghat. Govindghat – the starting point for trekking to Hemkund Sahib and Valley of Flowers. We had a look at the surroundings, had dinner and slept early in order to start our trek to Ghangharia early in the morning. End of Day 2 – 2 Sep 2010 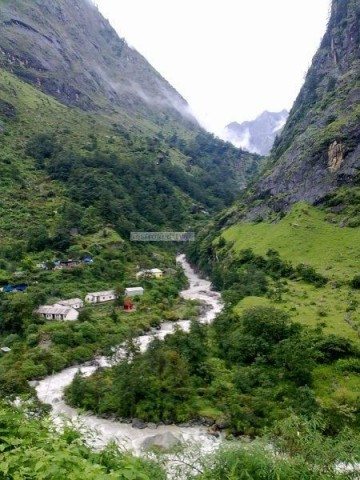 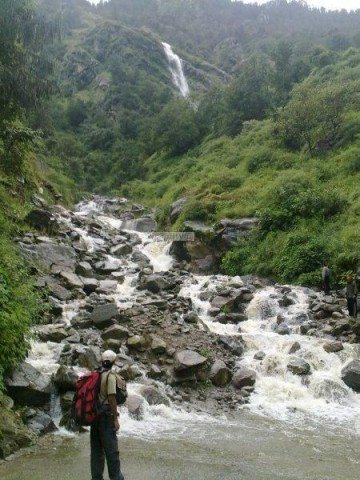 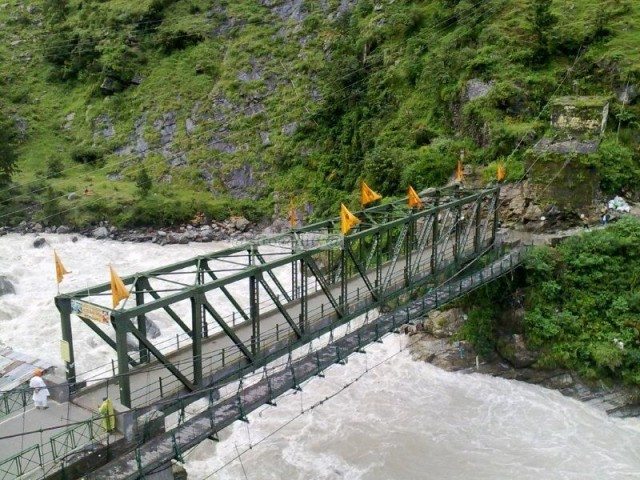 Note – Get all the essentials things here as the price increase as you go up. Also Airtel and Vodafone network won’t work from this point on and the electricity comes here for only a short duration of time.

With the sound of the alarm we woke up at 5 am and it was very chilly. I went to the balcony and it was dark. I stood there for some time listing to the sound of the river flowing by and feeling the cool breeze and i felt something within. Something that can’t be described. So we got dressed and started our 13 km trek around 6 am to Ghangharia – The base point for Hemkund Sahib and Valley of Flowers. It was still dark and with the help of torchlight we moved slowly. And after sometime the light got better and we were treated to the majestic views around us. As someone has filled colors all around us. 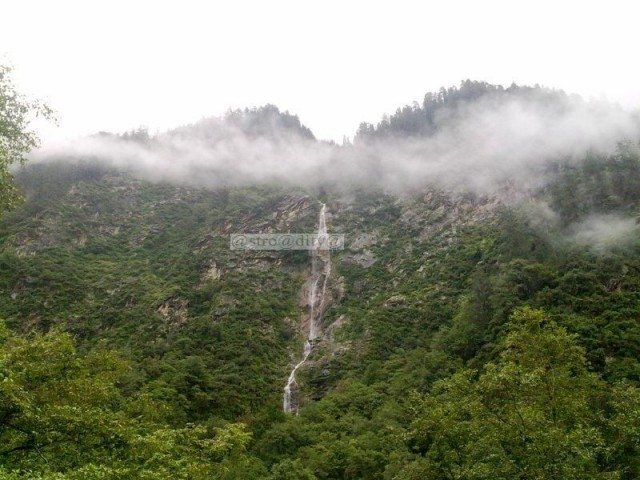 One of many on the way 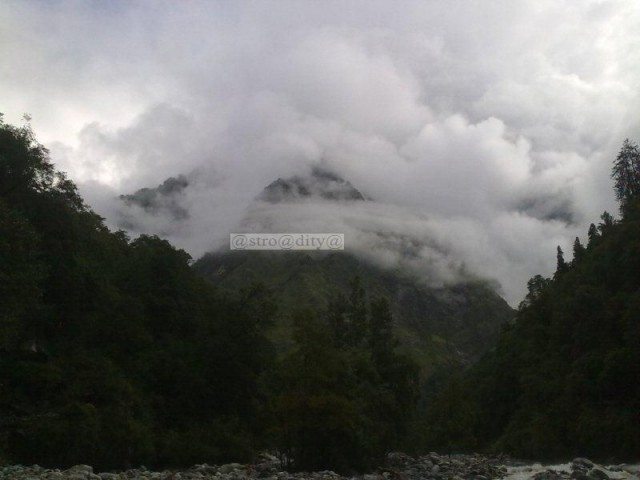 We continued our trek with some short breaks along the rocky path with more people around us. All chanting Satnam Shri Waheguru which made the journey a lot more easy. 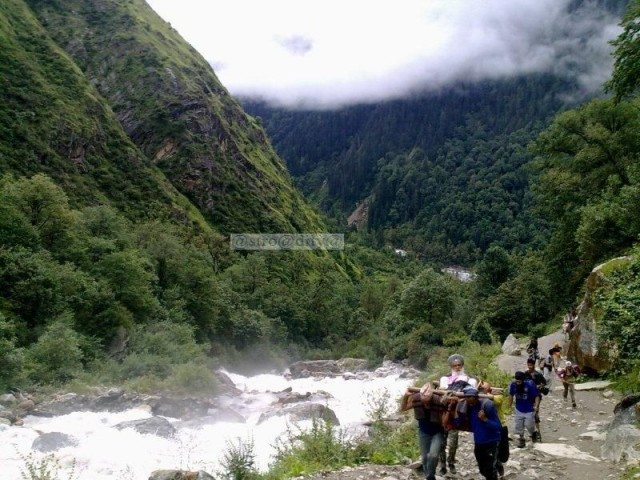 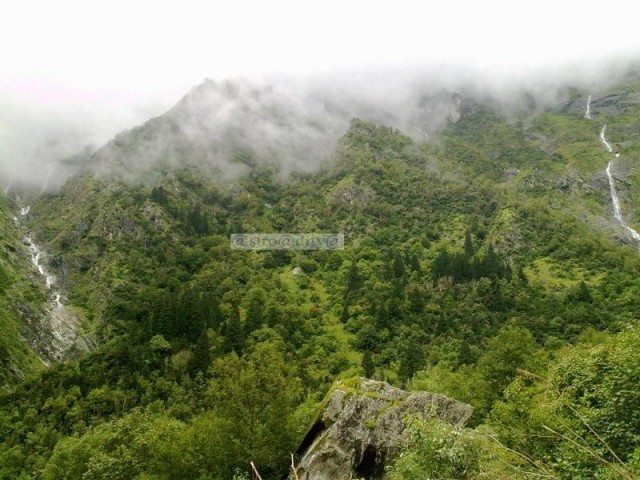 Finally around 4pm, we reached Ghangharia also known as Govindham located at 3049 m. It is the last human habitation area and serve as a base camp for travelers to visit Hemkund Sahib and Valley of flowers. 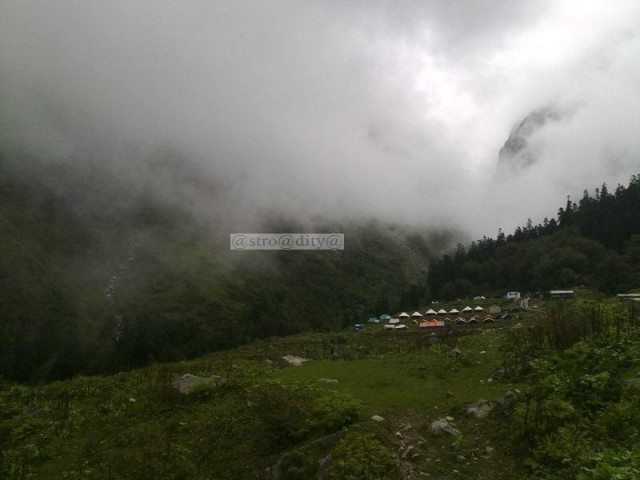 We managed to find ourselves a nice room at a good price because of off season and monsoon. As we were really tired and cramping we ate some food, took pain killers and slept leaving rest to Volini to take care. And it helped getting us acclimatize to the thin air. 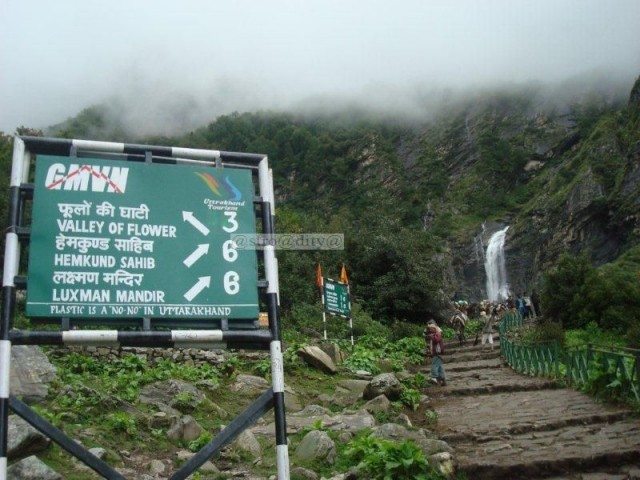 We again had an early start as we had to trek the most difficult 6 km trek to Hemkund Sahib with the altitude going up from 10,000 ft to 15,200 ft. Also their is no place to stay atop and no one is allowed to stay at the Gurudwara as the oxygen level at night falls and it is not possible for the people to survive in these extreme conditions. So in order to return back safely and in light start early. 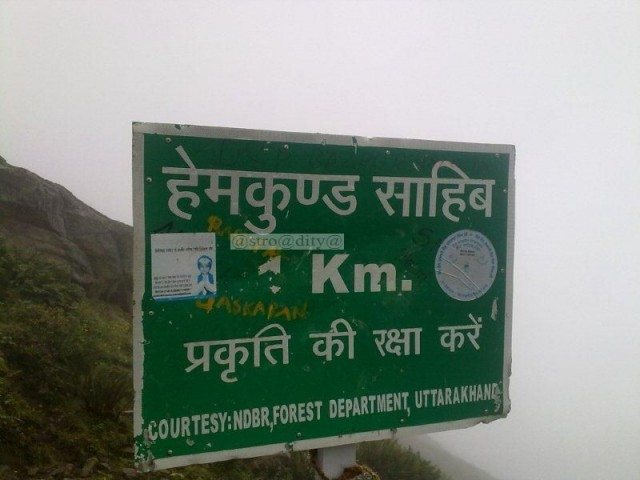 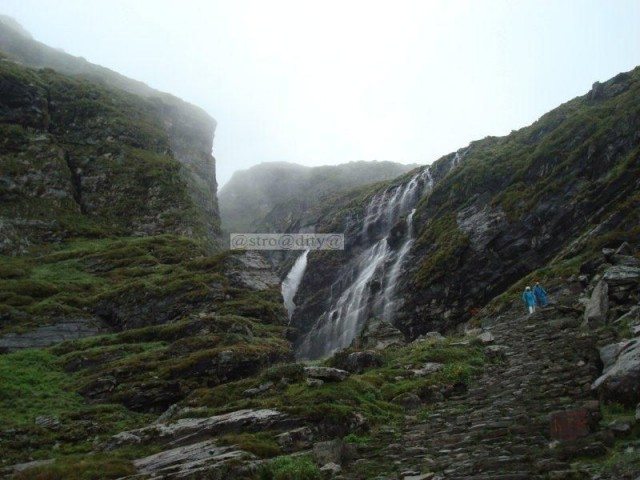 And we managed to reach there by 9.15 am just in time for the ardass which starts at 10.00 am. Now at 15,200 ft – Gurudwara, lake and lakshman temple making a perfect picture and it was magical, so serene.

Adhriraaj took a dip in the holy sarovar and i don’t know how in that nail bitting cold, i just stayed away as my only sweatshirt was not proving to be enough. Finally we entered the Gurudwara and meditated their for a while. 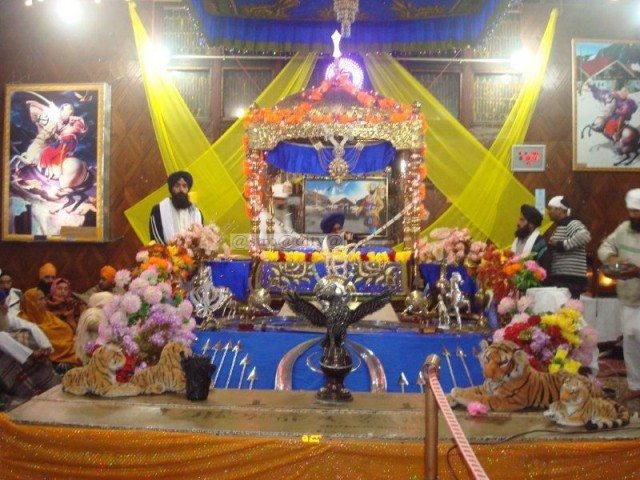 We came out tasted guru ka langar which consists of tea and khichdi and started moving back to Ghangharia.

We got back to Ghangharia around 5pm and were exhausted and drenched because of rain and even ponchos proved to be ineffective. We had an early dinner, took medicine and allowed sleep to take control over us so as to be fresh again for our next day visit to Valley of Flowers…

Trip to the land of Gods – Hemkund Sahib, Valley of Flowers, Badrinath and Mana Village….Part 1 was last modified: March 24th, 2020 by Aditya