This is the tale of voracious trees that have devoured a temple says JAYANTHI SANKARAN.

To anyone interested in seeing and understanding the extent of influence that Hinduism and Buddhism exercised across the seas from India, there is perhaps no better way than to make a visit to the UNESCO-notified World Heritage site in Cambodia: the Angkor Group of Temples.

Ta Prohm, part of the Angkor Complex, in the Siem Reap province of Cambodia, is awesome in its majesty and grandeur. Khmer King Jayavarman VII, so the story goes, built this monolithic laterite structure in 1181 AD in honour of his family. Although, its original name was ‘Rajavihara’ (royal temple), it was subsequently called ‘Ta Prohm’ – ‘Ta’ means ancestors and ‘Prohm’ means ‘Brahma’. So, ‘Ta Prohm’ means’ ancestors of Brahma’ – the Hindu God of creation. The Buddhist King commemorated this temple in 1186 AD.

The main image of the temple symbolizing ‘Pragnya Paramita’, the embodiment of wisdom, was dedicated to his mother. Complementary to the Ta Prohm, is the ‘Preah Khan’ whose central image represents the Bodhisattva of compassion – Lokesvara and is dedicated to his father. This was built in 1191 AD.

Sanskrit records indicate that the temple complex housed more than 12,500 people (including 18 high priests and 615 dancers). Additionally, around 80,000 villagers were said to have worked in and around to provide supplies and services. What is most interesting is that the Temple was very rich and was laden with vast amounts of gold, pearls and silks. 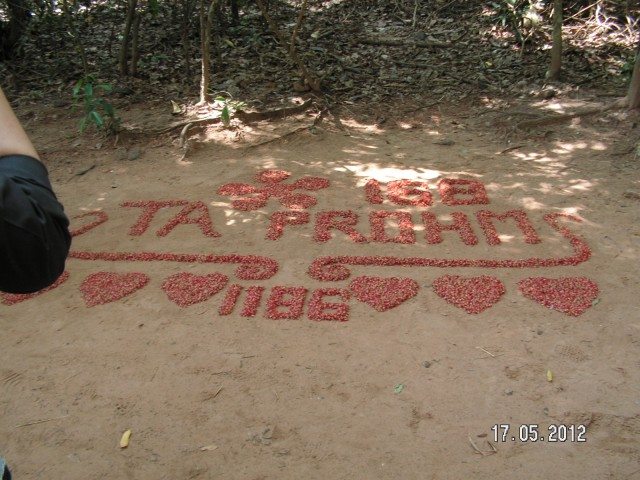 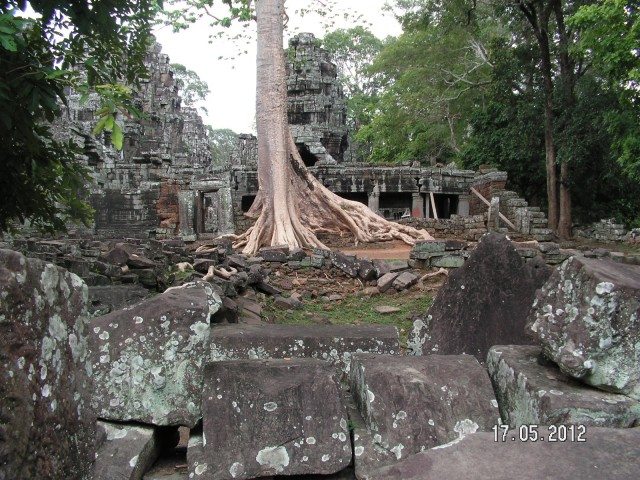 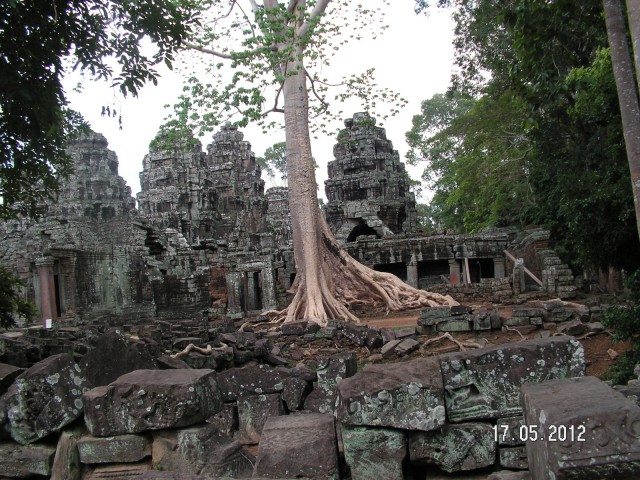 Many bas-reliefs of the Apsaras and Bodhisatvas in the ’Ta Prohm’, originally built as a Buddhist monastery, were subsequently destroyed by King Jayavarman VIII – a Hindu ruler. Further, the shifting of capital from Siem Reap to Angkor caused wars and dissensions leading to an abject neglect of the Angkor complex. 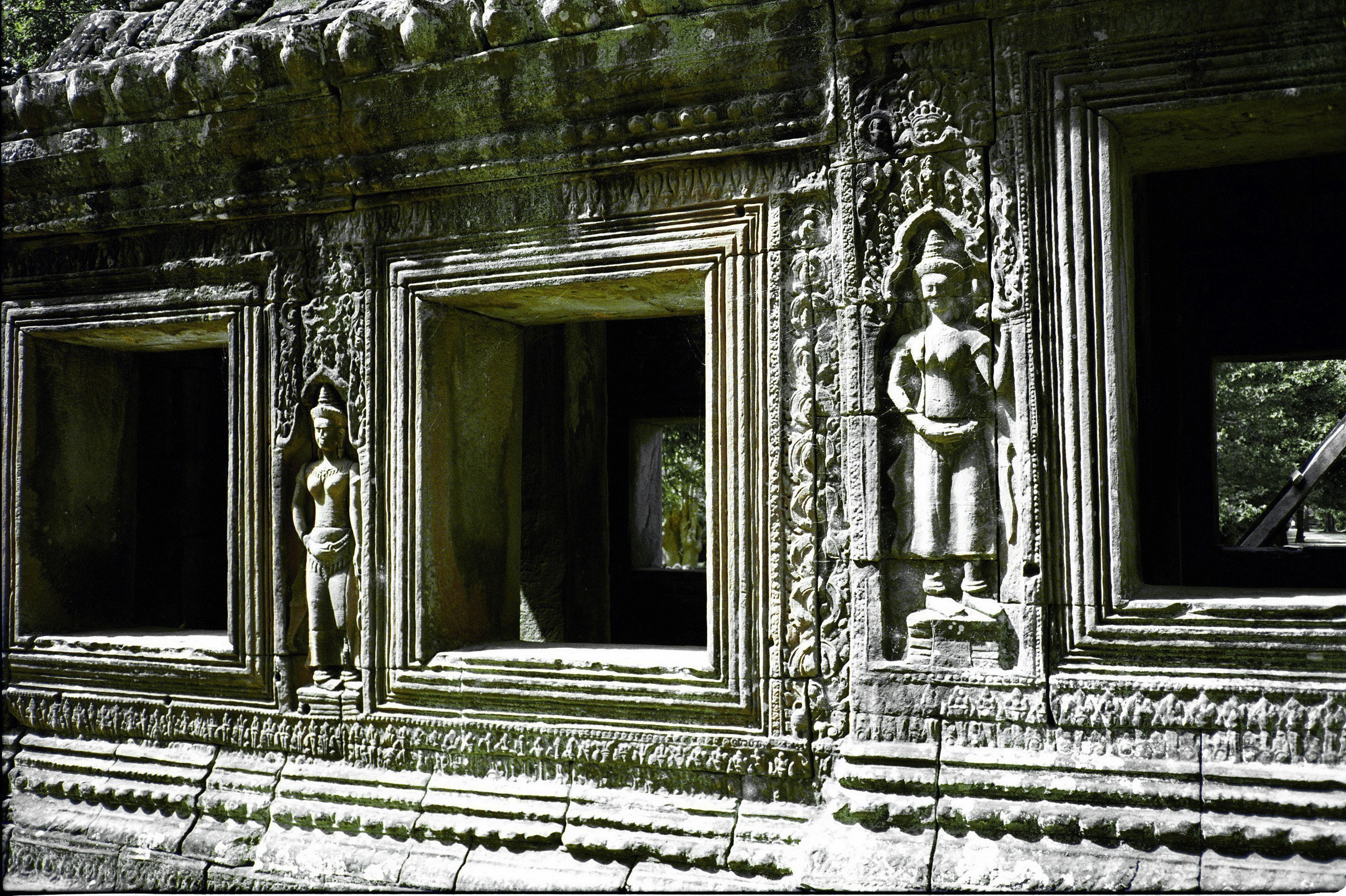 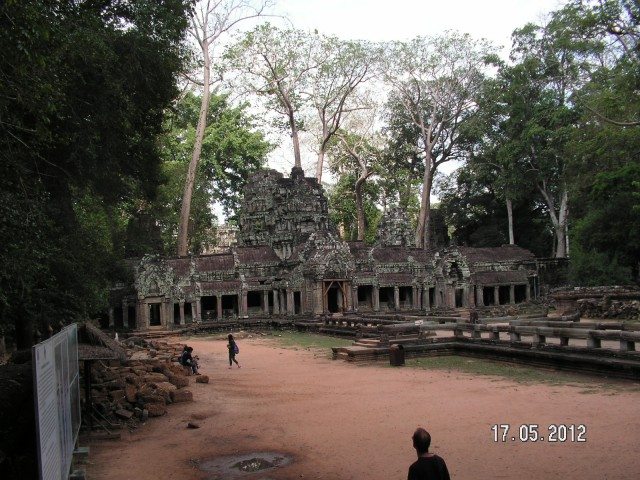 Sections of the Inner enclosure 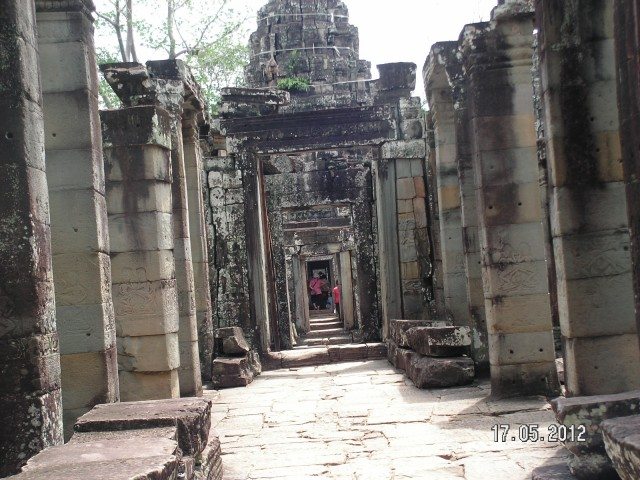 What distinguishes this temple from other Angkor temples is the saddening spectacle of gigantic silk-cotton, banyan and strangler fig trees, some of them more than 40 metres high, swallowing up large sections of the temple. This is the only structure that has been left as it is by the French, – the École française d’Extrême-Orient – who were doing renovation work, to bear testimony to the wrath of nature against man-made objects. 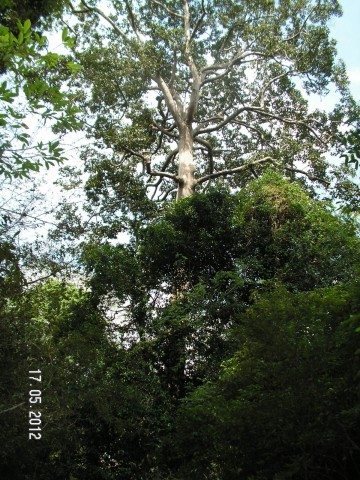 These gigantic trees, piercing into the heavens, have thick roots that bear octopus like configurations. These roots, perched above the earth, have grown, and are still growing, above, and into, the temple walls and have spread, tentacle-like, through the crevices and spaces between the laterite stones. The pressure that builds up in this constant battle between the roots and rocks forces the latter to rupture and come apart. 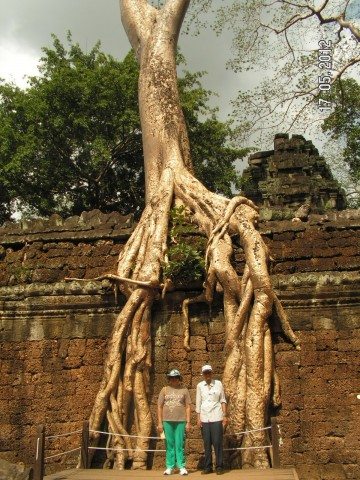 My dad and me surrounded by roots 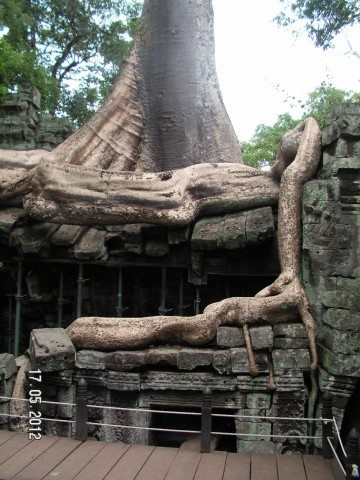 Roots growing at a breathtaking pace

In fact, in many places, including tops of doorways, the broken laterite stones are sitting precariously and are on the brink of tumbling down. Littered all over are stones that have been pulled down to prevent further damage to the temple and to humans. 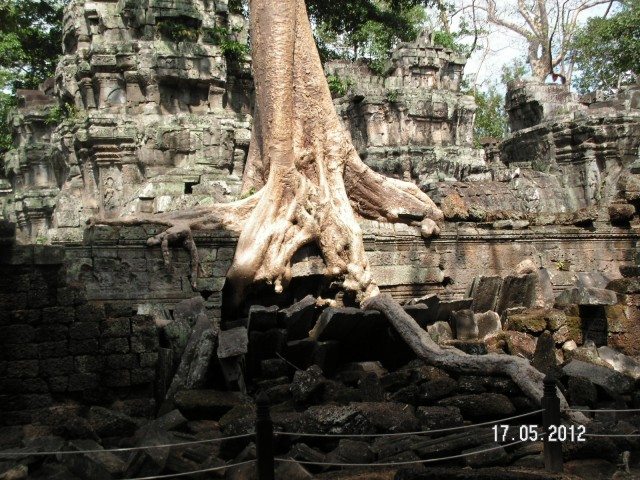 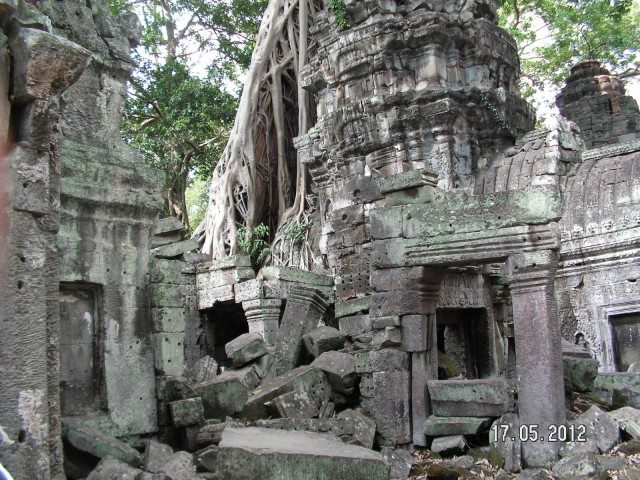 Talking about danger to humans, brings to mind a scene from ‘Lara Croft: Tomb Raider’ starring Hollywood superstar Angelina Jolie, which was shot in Ta Prohm. In that particular shot, she is led by a mysterious small girl who laughingly beckons her to follow, as she plays hide and seek with her. Finally, when she comes face-to-face with the girl, she is instructed to pluck some beautiful white flowers from a plant growing near a monstrous tree. When she plucks it to smell the fragrance and looks back to make eye-contact with the girl – she is gone, and Jolie is sucked into the earth right to the base of the tree. Pretty scary, is’nt it? For those interested, you can watch that particular scene in YouTube. 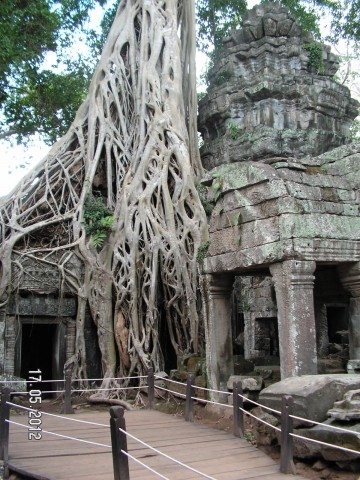 Although, sections of the Ta Prohm are currently being restored by a joint collaboration between the Archaeological Survey of India (ASI) and the APSARA (Authority for the Protection and Management of Angkor and the Region of Siem Reap), the sheer scale of destruction makes the restitution of the structure to its original glory, virtually impossible! 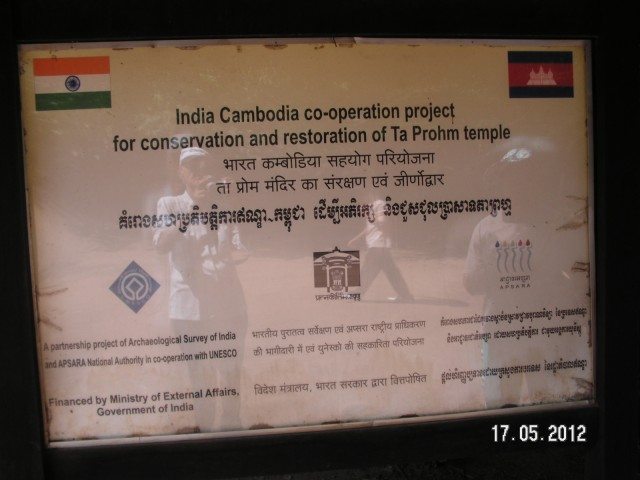 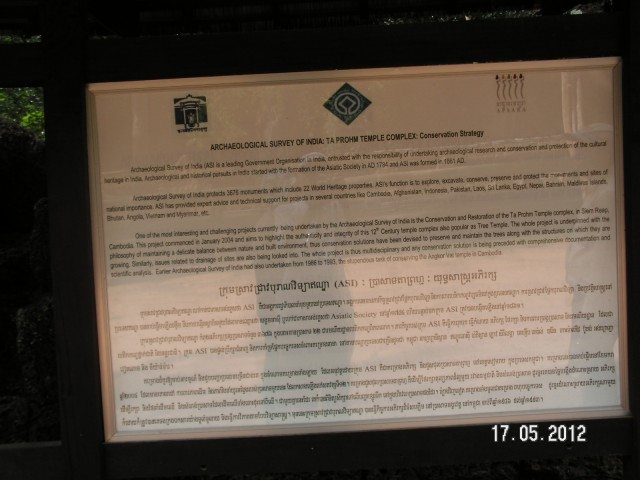 Further, the UNESCO 1992 guidelines which state that no trees can be cut makes this task daunting and formidable. The main aim of the guideline is to showcase the trees and the temple structure living ‘au natural’.

Although, we did see some restoration work in progress, we could surmise that the ASI and APSARA, had a very challenging task ahead.

As we left Ta Prohm, I could not but marvel as to how nature ultimately establishes its superiority over mere mortals.

GETTING THERE: Ta Prohm is 15 km from Siem Reap International Airport. There are many convenient flights from Singapore and other SE Asian cities.

WHERE TO STAY: Somadevi Angkor Hotel (four star). There are a number of other hotels suiting all budgets:  www.siemreapcambodia.org/angkor-temples/ta-prohm/ or www.agoda.co.in.

WHERE TO EAT: For Indians who are worried as to where to eat, – the local Cambodians are primarily carnivorous, and will eat anything that walks, creeps or crawls, except for humans! – a great place providing authentic Indian food is ‘The Indian’ located in the old market area, opposite the provincial hospital, close to Pub street in Siem Reap. The proprietor M. Sajeesh who migrated four years back from Kerala, and set up shop, worked initially as an accountant. He can be reached at 017928471 (local number).

HOW TO TRAVEL: For two people a tuk-tuk is very convenient and cheap. If a personalized tour guide is needed, it is better to hire a van with a driver.

BEST SEASON TO VISIT: The best time to visit Siem Reap is in the winter months between November and January.

BEST SEASON TO AVOID: The summer months between March to May are very hot and humid (33 degree Celsius).

A useful weblink is www.tourismcambodia.org which is the Department of Tourism, Cambodia website. 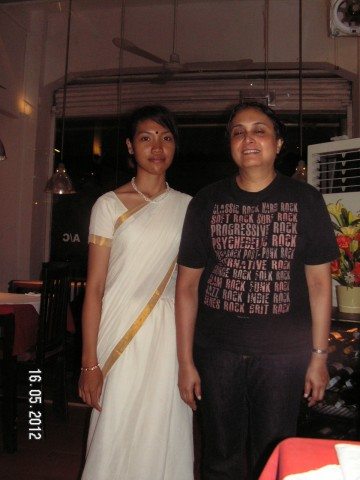 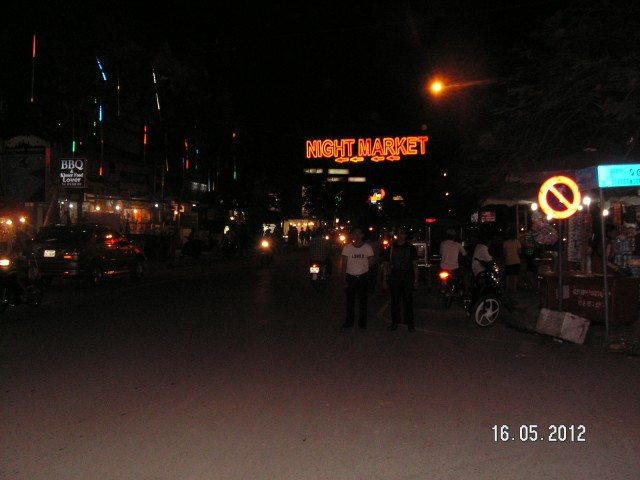 We had just set foot in God’s own country, in search of that elusive stuff called peace. It had rained just then. The sheer…