Villages floating on a lake? Yes! All things are possible for those who dare says

As my father and I, disembarked from our two-and-a-half hour Silk Air flight from Singapore to Siem Reap in Cambodia, we were stunned by the beauty of the ‘Khmer’ architecture of the Siem Reap International Airport. Nowhere in our travels, had we come across an airport which beckoned us to explore the culture, and history of its people by its sheer architectural design.

The term ‘Khmer’ (also, ‘Cambodian’ or Kampuchean’) refers to around 90% – 95% of the total population of Cambodia (14.8 million), with the balance 5% – 10% distributed amongst the Chinese-Khmers, Khmer Islam or Chams, thirty different ethnic hill tribes, and the Vietnamese.

Around 10% of the Cambodian population lives in Phnom Penh, the capital, making it a country of farmers, rural dwellers and artisans.

Villages floating on a lake? Yes! All things are possible for those who dare. The reason we chose to spend an hour on a boat cruise up and down the Tonlé Sap Lake was to witness the indomitable and resilient spirit of these villagers, who have made it their home.

This is the story of a community of Vietnam refugees that has rehabilitated itself in a novel and daring manner.

The ‘Floating Villages of Siem Reap’ were fashioned by the Vietnamese who fled war-torn Vietnam in 1979. The reason as to why these settlers chose to make the Tonlé Sap Lake their home was because of the fact that they had no identity cards, revealing their citizenship status in Cambodia.

Both Cambodia and Vietnam share a long history of innumerable wars, both within, without and between themselves. Amongst all the infiltrators, Cambodians have always viewed the Vietnamese with suspicion, because unlike the Thai or Chinese, they took over Phnom Penh (1979 – 1989), and tried imposing their culture, religion, language, political structure, and education. Even now, they are referred to as ‘yuon’ – a derogatory word in the Khmer language.

Even today, the Vietnamese have no legal rights to citizenship in Cambodia. They cannot hold property nor land rights. As a result, their only option is to live on water.
A whole population of men, women and children live in houses built on stilts on the Tonlé Sap Lake. Births and deaths take place, kids are schooled, and basic health care is available here – all on water! Despite years of slaughter, destitution and political insecurity, they carry a smile and a patient, gentle, and calm demeanour. 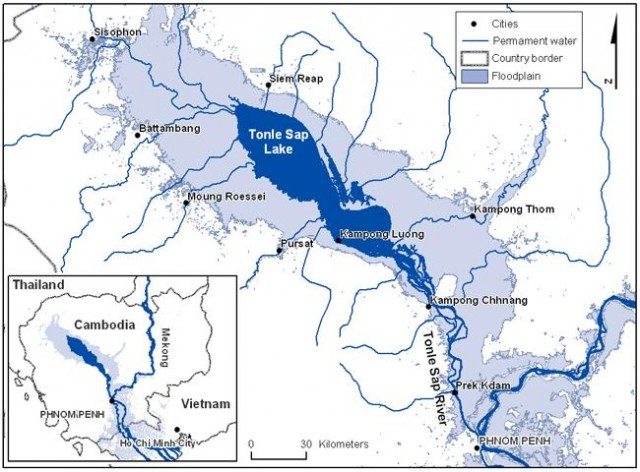 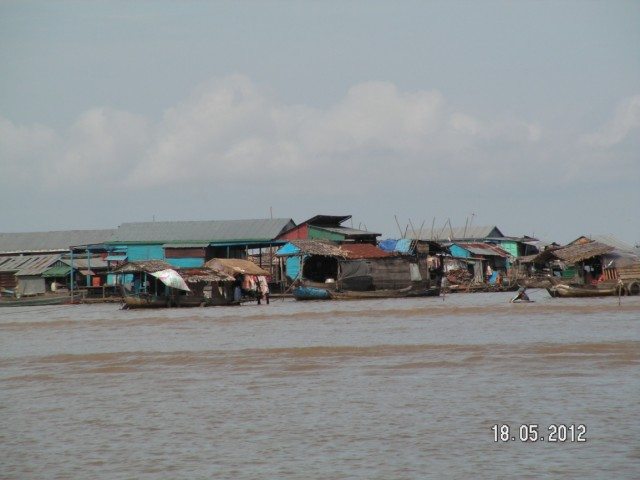 The Tonlé Sap, the largest in South East Asia – is an amazing fresh water lake. The Tonlé Sap River links it to the mighty Mekong River at Phnom Penh. What’s so special about these water systems is the way they are nourished and emptied out by the Mekong.

One of the better households

This seasonal filling and draining of the lake makes it one of the world’s richest sources of fresh water fish (more than 200 varieties – carp, giant barb and Mekong catfish, amongst others). And the Vietnamese have put to good use nature’s rhythms, for in the lake thrives a fishing industry, which supports one million Cambodians.

The eco-system and habitat surrounding the Tonlé Sap Lake also pulsates with its seasonal flooding and draining. A great majority of the trees, plants and shrubs are deciduous. Instead of shedding their leaves during the dry season, they loose them when the lake deepens, when they are inundated. However, there are also several plant species that remain evergreen, despite being waterlogged for six to eight months, each year. They are laden with fruits and seeds, at the time of flooding.

The floating villages are self-contained units. They are electrified using diesel transported by boats. Shops on the lake sell groceries, fish and rear crocodiles for their skin. They even have a floating school, basketball court, hospital and a church. 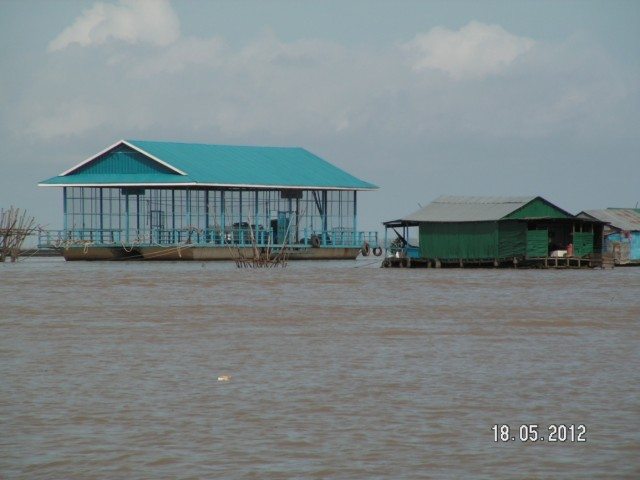 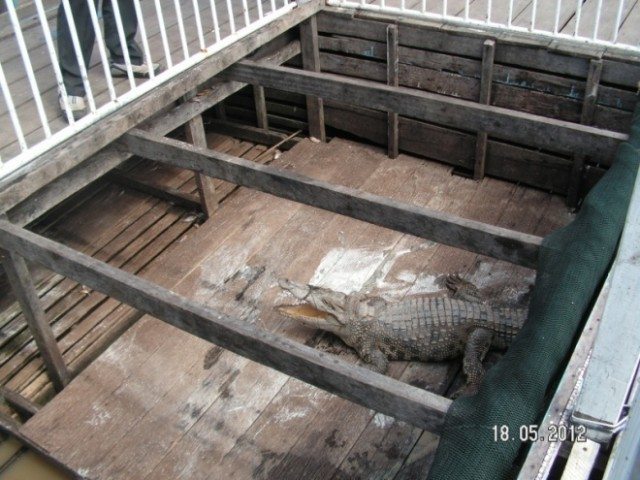 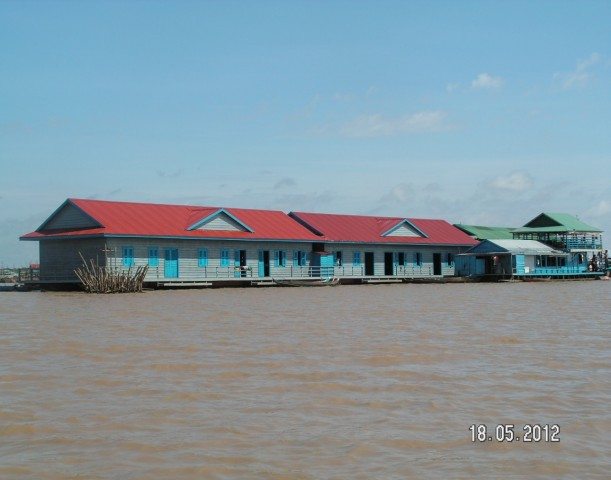 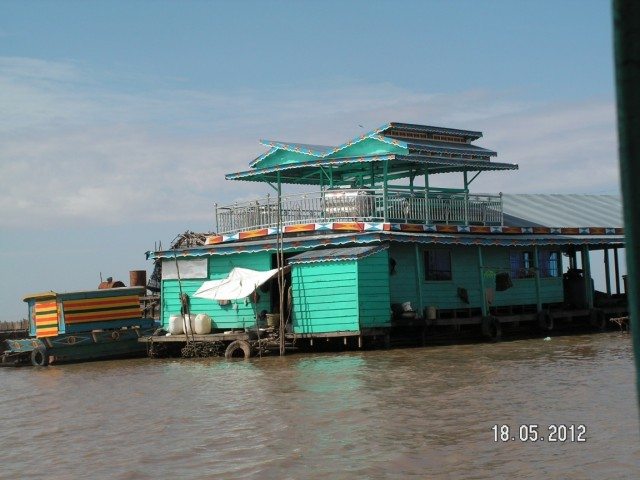 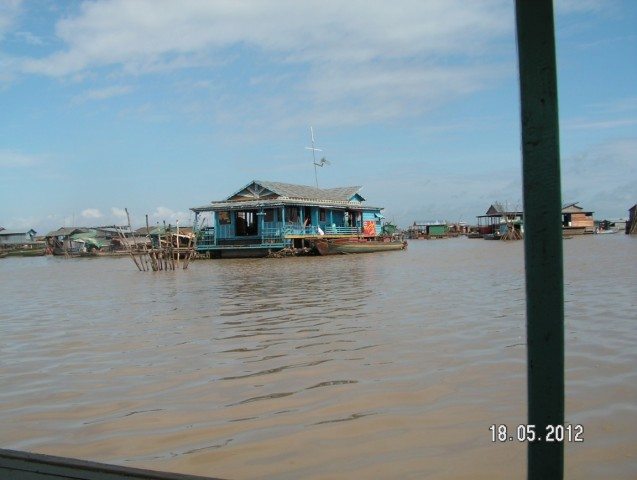 The houses are built on stilts. By an ingenious mechanism, aided by the ebb and flow of the lake, they manage to always remain above water. Although, the Vietnamese lead extremely hard lives to eke out a living, they have managed to make nature work for them.

As we bade adieu to our Vietnamese friends, we were struck by this thought – ‘In today’s world, where man typically harnesses his knowledge to exploit nature to its detriment, here is an inspiring example of how he has used his ingenuity constructively, to work in harmony with nature.’

GETTING THERE:
‘The Floating villages’ are 15km South of Siem Reap International Airport. There are many convenient flights from Singapore and other SE Asian cities.
WHERE TO STAY:
Somadevi Angkor Hotel (four star). There are a number of other hotels suiting all budgets:
www.agoda.co.in.
HOW TO TRAVEL:
For two people a tuk-tuk is very convenient and cheap. If a personalized tour guide is needed, it’s better to hire a van with a driver.
BEST SEASON TO VISIT:
The best time to visit Siem Reap is in the winter months between November and January.
BEST SEASON TO AVOID:
The summer months between March to May are very hot and humid (33 degree Celsius).

A useful web link is www.tourismcambodia.org/ which is the Department of Tourism, Cambodia website.