Imagine all Indians having education in Dutch language, not knowing English! That is exactly what would have happened if Dutch had survived and succeeded at Tranquebar in Tamilnadu. They were there much before the British, to form Dutch East India Company. If the rulers of the Denmark had sent good support to the Dutch East India Company, India would have been the colony of the Dutch, and not England.

My long cherished dream of seeing Tranquebar ( such a romantic name!), got fulfilled when I visited Mayiladuturai for a wedding on 25th April 2012. The train Mayiladurai express connects the town to Bangalore. It left at 7.20 P.M. from Bangalore city station and reaches Mayiladuthurai at 7 A.M. Vendors started supplying food- rice bath, chapatis as soon as the train left Bangalore. There are so many important stations on the way like Salem, Erode, Karus, Trichy etc, that you cannot have peacful sleep with people getting out and getting in every few hours. I got up by 5.30 when the train reached Tanjavur, with vendors shouting Kaapi! Kaapi!

The name Mayiladuthurai in Tamil means- a town where peacocks dance. I was pleasantly surprised to see peacocks in the field early morning as I looked through the window, justifying its name. I got an autorickshaw ( Rs 60/-.) from the station to the Hotel Dayalan, a decent one next to the Town Clock Tower ( Mani Kundu in Tamil). After checking in, had a bath and found that the marriage party will be arriving only by 12 noon. This, I thought is the best chance to visit Tranquebar.I went to bus stop and found that bus are not frequent and it will take more than hour to reach, though the distance was only 30 kms.As I was pondering, an autorickshaw fellow offered to take me there and back for Rs 400/-. I thought the rate was too high and asked a taxi driver. His quote of Rs 600/-. seemed very reasonable and I hopped into it at 9 A.M. The taxi in rural Tamilnadu are the wonderful Ambassador cars, solid, lots of leg room. I travelled like a king, educating the driver, who seemed ignorant of the history on Tranquebar. We reached Tranquebar by 10 A.M. 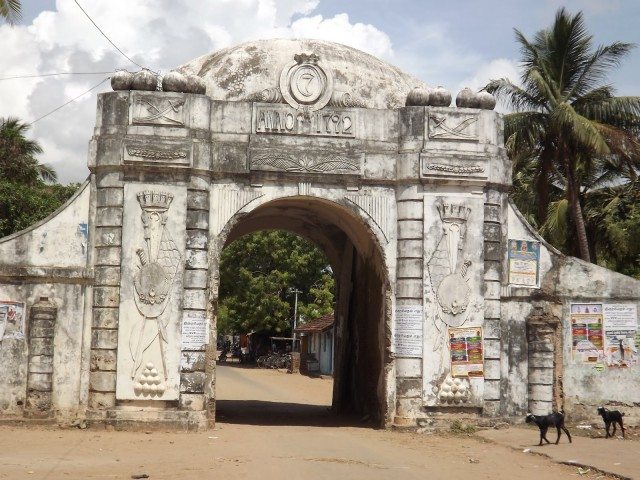 Tharangambadi (or Tranquebar) is a panchayat town in Nagapattinam district in the Indian state of Tamil Nadu, 15 km north of Karaikal, near the mouth of a distributary of the Kaveri River. Tharangambadi is the headquarters of Tharangambadi taluk. Its name means “place of the singing waves”. It was a Danish colony from 1620 to 1845, and in Danish and some other European languages it is known as “Trankebar” or “Tranquebar”.
The earliest reference to Tarangampadi occurs in a 14th century inscription, mentioning the place as Sadanganpade. Tranquebar was founded by the Danish East India Company in 1620, when a factory (commercial settlement) was opened and a fort, known as Fort Dansborg, was built by a Danish captain named Ove Gjedde. This fort was the residence and headquarters of the governor and other officials for about 150 years. It is now a museum hosting a collection of artifacts from the colonial era. 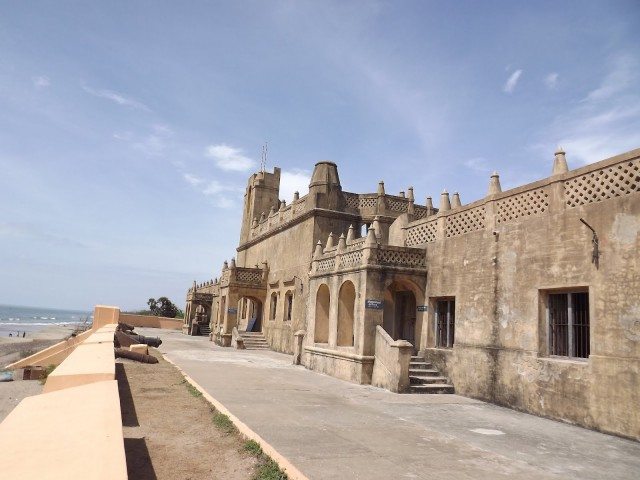 Tranquebar came under the control of the British in February 1808, during the Napoleonic Wars in Europe, but was restored to Denmark following the Treaty of Kiel in 1814. Along with the other Danish settlements in India (Serampore and the Nicobars), it was sold to the British in 1845. Tranquebar was then still a busy port, but it later lost its importance after a railway was opened to Nagapattinam.
Danish Museum– The museum contains porcelain ware, Danish manuscripts, glass objects, Chinese tea jars, steatitle lamps, decorated terracotta objects, figurines, lamps, stones, sculptures, swords, daggers, spears, sudai (stucco) figurines and wooden objects. There is also part of a whale skeleton.

The Fort was first based in 1620 A.D. Danish-Crepe was in charge of Tranquebar1622. He went back to Denmark 1636 leaving it to Dutchman agent Barent Pessart. In 1639 William Leyel came and took over Dansborg Fort. In 1650- Dutch East India Co was dissolved. Zion Church in King street was built in 1702. New Jerusalem Church was built in 1718 by Ziegenbalg. The Governor’s bungalow was built in 1784.Because of the political situation, the British East India Company brought the Danish settlement in India in 1845. So the Danish King sold the town and the territory to the British East India Company. You can reach Tharangambadi (formerly Tranquebar) from Mayavaram in Tamilnadu, which is well connected by railway. ( Mayiladuthurai junction). The best place to stay is Mookambikai Residency, a decent hotel on Thirukadaiyur main road ( 10 kms away). The British bungalow is a five star hotel now, called Bungalow on the Beach.

The Dutch Governor’s residence built in 1784 is being restored by INTACH.When you walk down the 200 year old entrance arch through King’s street, you can feel the Dutch influence on the land, with old houses, convent, Zion Church built in 1702, New Jerusalem Church built in 1718,leading to the Governor’s residence on your left, the Fort at the edge of the sea on your right, and the British Bungalow on your left. At the corner of the road, there is lovely statue built for the Protestant priest Ziegelbalg. 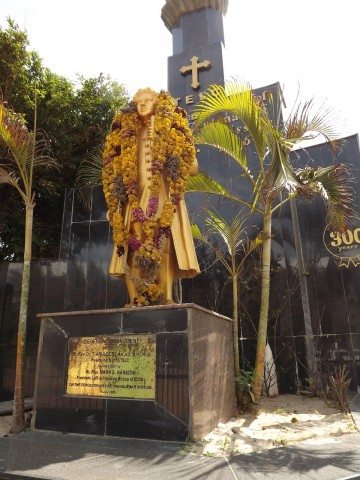 He established Christian movement in the area, sermoned in Tamil, translated Bible into Tamil, printed first tamil books here in 1706.As you climb on the parapet of the fort towards the sea, you can imagine the number of ships which must have landed there (they have listed them in the museum inside), the silent cannons looking towards the sea as if they ready to fire( they reminded me of the movie- Guns of Navrone). Time stands still here and your are transported to those days! 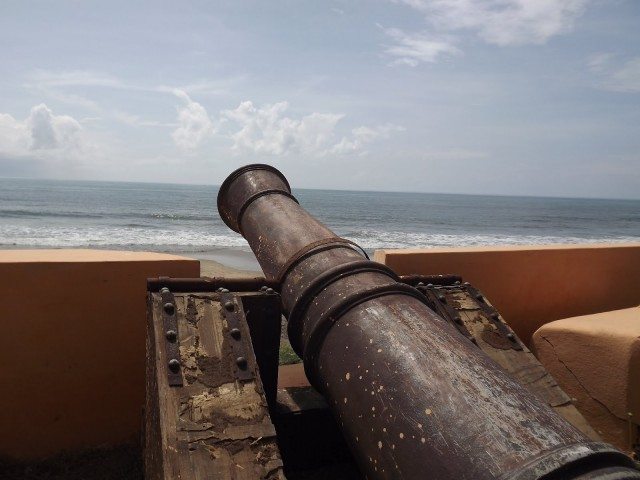 The Silent Guns of Tranquebar

I reached Mayavaram ( Mayiladuthurai) back by 11.15 A.M and I found that the marriage party had arrived in an a/c 15 -seater van from Chennai.The function was in a lovely temple in a small village 17 kms from Mayavaram called Thirumeeyachur.The location, function,temple, divinity, rituals, food in purohit’s house, loud Tamil Rajnikant action movie in the bus video etc are topics for a great experience and a separate story.
Tranquebar was last modified: December 8th, 2020 by jaykakarla