I have always boasted that I love driving. This drive was to prove to myself ( at age 59) that I really do. Yes! I do love driving!

Myself and my daughter, Anu, started on 26th April 2005 in our Alto Vxi at 5.30 A.M. from Bangalore. It is the best time to avoid city traffic. We took the NH4-Tumkur highway and reached at Tumkur ( 63 kms from Blr) at 7.00 A.M. On the highway before the city, you will find New Woodlands Hotel on your right, opp SIT . Good place to have decent idly, vada, dosa etc.Having filled our grumbling stomach, we drove on to Chitradurga (137 kms from Tumkur). The newly laid NH4 is so good that we could make in 2hrs 30 mts, via Sira, Hiriyur, to reach by 9.30 A.M.

Windmills welcome you as you reach Chitradurga. The town is surrounded by mountains on all sides, with windmills on them. A very differently wonderful sight compared to other Karnataka towns. After having a hot cuppa on byepass, we learnt that the best way to reach coastal highway is to take the road to Sirsi from Haveri. We continued on NH4 to Davangere. We entered the town, since Anu wanted to see the famous University town, a center of learning of Kuvempu University, filled with students from different parts of India, something like Oxford of Karnataka. Very impressive. We continued on NH4 to reach Haveri by 12.30 ( 131kms from Chitra). Had a pitstop and nice light lunch at Shanbag Restaurant. From here we took a left turn to leave NH4 to Sirsi. The road is low traffic, decent, lovely country side road where Anu took over the wheel. We reached Sirsi by 2.15 P.M.( 72 kms from Haveri). Marikamba Temple at Sirsi is worth visiting, for the fantastic paintings on the walls. It has a soothing , calm atmosphere,like all coastal Karnataka temples. The drive from Sirsi to Mirjan on NH17, is cool, green, very enjoyable through Devimane ghat, Katgal Forest Checkpost.We reached Mirjan at 4.20 P.M. ( 60 kms from Sirsi). We got onto NH17, where I took over the wheel, since Anu is scared of truck traffic.

We reached Gokarna at 4.40 P.M.( 20 kms from Mirjan). We visited the temple and the beach. On the way to the beach, you must visit Radhakrishna Book Store, the only book shop in Gokarna, run by Krishna Das.( a bearded, leftover flower child ?). The town is full of Bhats, all claiming to be Head –Priest of Gokarna. It seems, it is the center for doing Hindu rites for the departed and these Bhats are making good money on the dead, arranging all rituals by the sea. All including Anu, dissuaded me visiting the famous OM beach of Gokarna. The beach is in the shape of OM, and is famous for its numero uno position in the drug scene map of India. Anu preferred to visit alone on her own later, since she felt that my visit to the beach will result in engaging one of those Bhats for my final rites after the cultural shock.

We drove to Karwar, via Ankola ( don’t miss Kamat on Highway for the last Karnataka coffee).We reached Karwar by 7 P.M.( 65 kms from Gokarna). It seemed a wonderful town by night, with bulk loading terminals on dockside, ships, beachside with full of people enjoying the evening.We entered Goa at Loliem. You can’t believe it is NH17, between Loliem and Chauri. The road is narrow, winding, like village roads, hibiscus peeping over compound walls, deserted without any people( all enjoying their wines, I presume) or traffic. The road complexion changes after Chauri. It is straight, with people and two wheeler traffic increases. We reached Mudgaon, through Gullem, Barsem,Bali,Assolna, Navelim at 9.30 P.M

( 67 kms from Karwar). Stayed at Hotel Fleur, near Bus stand, a decent hotel ( Rs600/-. per night A/c doubleroom). You can hear trains moving in and out of Mudgaon station, since the hotel faces the track. But avoid looking out of the window early morning hours.Good food, reasonable rates.

We had a lovely breakfast at Hotel Fleur at 7 A.M. and left Mudgaon on NH17, via Nuvem, Verna ( we went through Verna by mistake and we enjoyed seeing real Goa and did not regret the mistake), people in immaculate dresses waiting for buses in busstops,Nagao, crossed River Zuari, Goa Velha, crossed Mandovi river,Mapusa, Colvale, Malpem, Naibagha to cross into Maharashtra( 71 kms from Mudgaon) Remember to fill petrol in Goa, since it is much cheaper than Maharashtra or Karnataka.

Maharashtra, here I come! Vegurla, Sawantwadi (most scenic place, with hugh lake by the side of road, and the town on the other side of the lake),Kudal. We took a turn to visit Malvan beach, but decided against it when we learnt that it is 25 kms more from there.Oras, Kankauli, Rajapur, Lanja,Hathkamba. Here you have to take a left turn to visit Ratnagiri.

You just can’t miss Ratnagiri. The most beautiful site is the View from top of hill near Thibaw Palace and the Thibaw Palace itself. This is worth visiting. We reached by 1.30 P.M.( 275 kms from Mudgaon). We spent nearly 2 hrs in Palace, the theme of book Glass Palace by Amitav Ghosh. We could feel the spiritual presence of the Burmese King and his queen. We stealthily entered the Ball Room and the verandah overlooking the sea through creaking stairs. We could imagine the King sitting on the verandah and looking at the sea with nostalgic memories of Burma during his arrest and confinement in this palace. He lived and died here and his grave is in Ratnagiri. This palace is very romantic with great character. Some part of it is renovated and mostly neglected, with broken window glasses and blocked with wire mesh by Govt. We felt that it was worth coming all the way, just to see this palace. 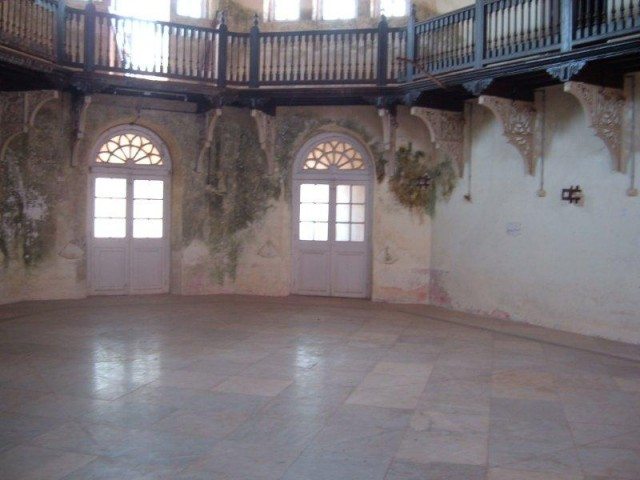 With the palace haunting us, we took our lunch, bought alphonso mangoes( got cheated), drove back to Hathkamba to join NH17. Here, we decided to skip Ganapatipule ( all beach temples are same, after seeing Gokarna)and proceeded to Sangameshwar ( take a right turn here to go to Vishwamitra temple),Chiplun,( the most picturesque part of the road is from Hathkamba till Poladpur),Khed,Poladpur,Mahad,Mangaon,Kolad,Roha, to reach Panvel ( 580 kms from Mudgaon) at 8.45 P.M. The eateries on the way serve only vada/Pav, no other choice.

The problems started after Panvel. The truck traffic was so heavy and it took us two hours to reach Colaba from Panvel ( 642 kms from Mudgaon)at 10.30 P.M. The clock showed 16780. Bangalore to Mumbai- 1257 kms. A great drive !

After spending hectic 5 days at Mumbai, Nirmala, self and Anu, decided to come back to Bangalore through Maharashtra. We started at 5.45 A.M. on 4th May 2005, from Colaba. We could reach Chembur in 20 mts and passed through Navi Mumbai. Nice broad roads, shopping malls, high tower apartment blocks, lots of people jogging by the lake.We could reach Pune Expressway very fast. Expressway is really fantastic by Indian standard, though I felt the toll of Rs 119/-. per car, exorbitant. The pitstop, before the Bhor ghat is ok, food tolerable.( I expected better).Pune development by the side of city bypass is phenomenal. Tower blocks, shopping centers, people rushing to work into the city, We continued on to NH4 towards Satara. After Narasapur, we took a left turn towards Phaltan. This road goes along pictureousque Nira river on the left. Wild roads, but decent, low traffic, real country side. We passed through Phaltan, Dharmpuri, Malsiras to reach Pandarpur by 2.00 P.M. The temple priests tried to fleece us. We took a free Darshan, in half an hour, instead of so called superfast darshan for Rs 1100/-.

The temple is very holy, with good positive vibrations. The idol is fabulous, made of black stone. The surface of idol is not fine grained. It looks like made by hands instead of chisel. They say the idol is swayambhu. The God, Panduranga Vittala’s face is the most peaceful, serene face that I have ever seen on an idol. We did a puja at Goddess Rukmani temple. Nirmala and Anu danced in the temple courtyard as part of tradition there. We spent quite a while at temple savouring the atmosphere, though it was hot.

We skipped lunch, as we did not find any decent hotel in Pandarpur. We hit the road to Mangalwedha, Zalki, to reach NH13. The road between Pandarpur to NH13 is very beautiful scenic wise, though the road surface is not very good. You can enjoy real nature and countryside scenes on this road. We took some unforgettable sun set photography on this section.

There is very good Restaurant next to Petrol station on the highway.You can fill both your tank and stomach. We reached Bijapur at 5.00 P.M.and could not resist the Kamat Restaurant, for our Karnataka Masala dosas. We reached GolGumbaz by 5.45 P.M and found that it closed for visitors by 5.40 P.M. We had a big fight with the security, but they were adamant. He allowed us for a certain distance inside and we took photos against the setting Sun. We took more photos from the bridge, on the way out to NH13.

The section of the road from Bijapur to Almati is good. We reached Almati by 9.P.M.

We got up at 6 A.M., had a refreshing bath, packed our breakfast from Udipi hotel next door and and were on our way to Badami. The shortcut from Almati, is to take Bagalkot road, take a left turn at Sangam cross 10 km before Bagalkot towards Badami. We crossed Mumbai train line at Guledgud, where we had a nice tea.” Safety on road, is Safe tea at home!” At Badami, we got a good guide( Chandru Katigeri- cell 94499-23161) who explained about the caves and carvings. The carvings are breathtakingly beautiful. It has to be seen to be believed. Dance scenes in movie GURU was shot here. We spent nearly 3 hours and saw everything. 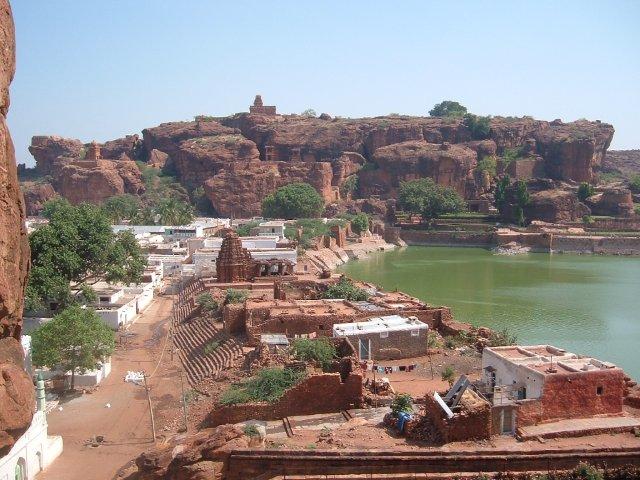 Then we drove to Patadakkal. This is good but in almost destroyed condition. Curd in Mud pots are great here. After Pattadakkal, we crossed Malaprabha river, to reach Hundgund and joined NH13 at Ilkal. It seems the place is famous for sarees. We missed it.We had nice lunch at Ilkal and hit the road to Kushtagi and Hospet. We could see mining business raping the hills around Hospet. We continued to Kudligi to Chitradurga. On byepass, we had nice tiffin and coffee. We passed the windmills of Chitradurga and reached Bangalore via Hiriyur, Sira, Tumkur, Nelamangala cross. The road from Chitrdurga to Bangalore is superb now. We could clock 100 km easily for long stretches, except at Tumkur town.

Bangalore to Mumbai and back was last modified: June 9th, 2020 by jaykakarla

Sindhu was flowing just behind the hotel. So the sound of the full flowing river was continuously available. We saw the setting sun in its full glory. Entire surrounding was magnificent with absolute calmness, except chirping of birds and roar of the