It’s being a long time since I have shared my travel experiences or travelled for a long to discover the hidden world around us.

On 2nd of March one of my friends had planned to visit Gokarna hence I also decided to take off from work and take my family to Gokarna and Goa for a week but on different dates. Some time you need little inspiration or push to decide about even small things in life and this time my friend gave me that little push.

Hence planned to drive via Hubli to Gokarna and made the bookings in Om Beach resort and Royal resorts in Goa (will come later as another story) on 3rd of March. My wife was discussing with our common friends about the trip and they also decided to join us so made another booking on 4th March.

Initial plan was to start from Bangalore to Hubli in my car (my wife and my son) and other family with 2 kids in his Car on 17th Morning but my friend was not so keen on driving and forced to book train Tickets. Bangalore to Hubli (16th March – celebrated my birthday in train) and Goa to Bangalore (23rd March – waitlisted but got confirmed later)

Gokarna is about 453 km from Bangalore and 165 KM from Hubli. We started by train at 7:45 PM and reached Hubli on 17th early morning at 3:45 (though arrival time was 4:30 AM – Trains do reach early in India also). Anyway Taxi (booked in advance) came as per the time given to him and we started at 5:00 AM from Hubli and had a breakfast at Kamath on the way and reach Om Beach resort at 8:45 AM. Normal check –in time was 12:00 however staff made the rooms ready by 10:30 and we checked in to relax.

The main beaches in Gokarna are the Gokarna beach, Kudle Beach, Om Beach, Half moon Beach and Paradise Beach (also known as Full moon). Gokarna is also famous for its beautiful beaches and landscapes. 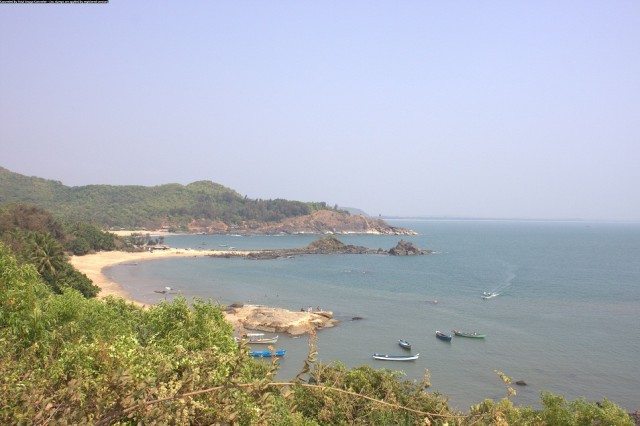 After having lunch in afternoon we went directly to Om Beach (Om beach is named so because it is shaped like the auspicious ॐ [Om] symbol ) which was a star attraction of Gokarna Visit. After spending nearly 3 hours we hired a boat after lot of negotiations to visit Half moon Beach and Paradise Beach (also known as Full moon). These beaches are like your individual private beach with very few people around.

We were very tired by evening and came back to resort for drink, nice dinner and good night sleep. During Dinner we met local people who helped in hiring a local vehicle (Tata- venture) to visit Yana Caves.
Morning was as wonderful as it can be with birds chirping and rooster shouting J. After finishing our breakfast at resorts and kept some snacks and drinks for the journey to Yana caves which were 40-50 KM from our resorts we started at 10:00 AM in morning. 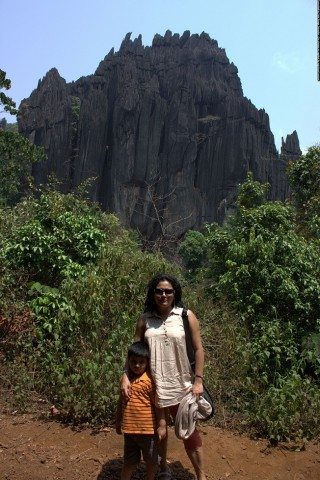 We reached Yana caves parking at nearly 12:30 PM and all the visitors warned us about Honey bees attack and we were little scared as we were with small kids. However we decided to turn back the moment we will see Honey Bees. Caves are nearly 1-1.5 KM walk in Jungle and we were shocked to see that once we reached that spot. It is like a burnt old British castles with lot sof honey bee hives and temple beneath that.
Temple Pradashana is thru the caves and one has to do barefoot and best and dangerous part was to come down from those caves using rope and keeping foot on hot sunny limestone rocks. I think temple authorities should allow one to wear shoes. By this time all were so tired due to great bumpy ride till caves and walk thru the Jungle, heat and walking thru the caves.

Anyway now the toughest part was to go back to parking in such a hot weather with kids. Thanks to all kids they all walked climb up the hill (not much though for us) without crying or making any fuss.
We reached back to resorts at 4:30 in evening and again decided to visit Gokara town beach and Mahabaleshwar Temple – famous Shiva Temple which houses the ‘Atmalinga’. Named so after Ravana referred to the linga’s great strength. Till the government handed over the temple to a public trust, all the public of Gokarna – supposed to be the office bearers of the temple – were managing the temple.

It is situated at the western end of the main street. The main deity here is two-armed, standing and at least 1500 years old. The idol of Lord Ganesha also is ancient. In the sanctuary is a stone linga, encased in brass, placed on a coiled stone serpent. The floor of the hall in front has an intricate engraving of a giant tortoise.
Story of This Temple is like this as per Wikipedia –
Mythological reference to Gokarna describes how Ravana, the demon-king of Lanka, received the atmalinga from Shiva after he had performed a penance at Mount Kailash reciting self-written Shivatandavastotram. Shiva instructed Ravana that the sacred atmalinga should not be placed on the ground as it would establish itself where placed on earth. On his way back to Lanka, Ravana stops for his evening prayers at Gokarna. To prevent Ravana from getting a weapon as powerful as the atmalinga, Ganesha, in the disguise of a Brahmin boy, tells Ravana that he will hold the atmalinga until Ravana finishes his prayers. As soon as he receives the atmalinga, Ganesh promptly puts it down. Ravana tries to extricate, resulting in throwing the coverings of the Linga to Surathkal, Dhareshwar, Gunavanteshwar, Murudeshwar and Shejjeshwar temples.

Gokarna is a town of contrasts, as it is a temple town and also a holiday destination by the sea.

Maha Ganapathi Temple built in honour of the boy Ganapathi, who deceived the demon Ravana.
Other famous place is Murudeshwra 85 KM from Gokarna religious place belong to one more Ravana and Shiva story. 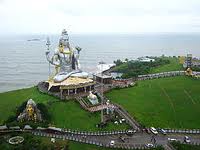 The best part of the trip is to catch a train to Goa from Gokarna Road Station. It was such a personalised affair that Train Master assured us that train will not leave until we all get board station was so clean and very few passengers that you can count them 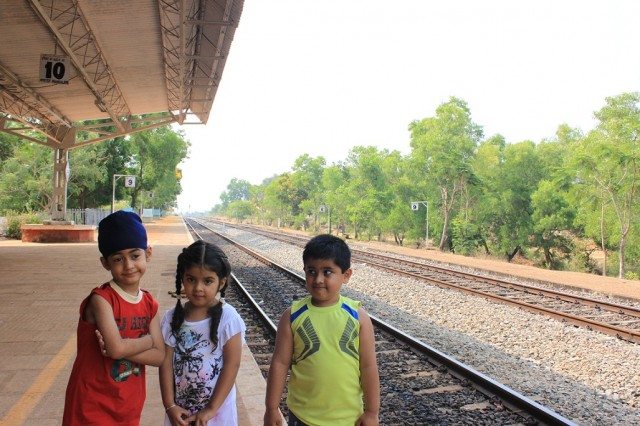 At the Gokarna Station 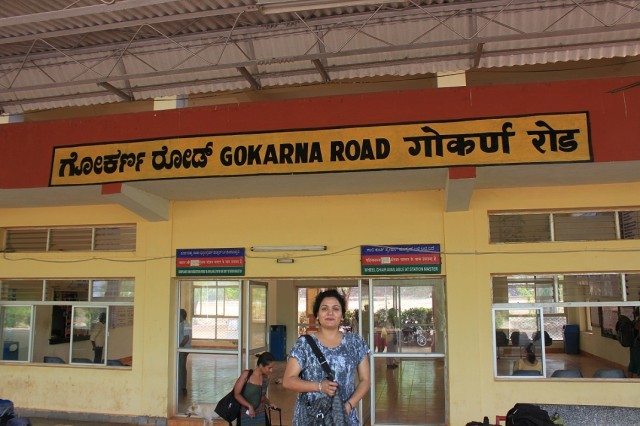 There is not much to do at Lavasa except walking along the waterfront promenade, the prime attraction, which is very well maintained and clean. It was about 10mins walk from our hotel, Mercure. It also offers various options for dining at restaurants serving delicacies from different countries like American, Australian, Lebanese, Singaporean, Chinese along with Pizzas, Ice-creams and Indian street foods like Chats & Tikkas. Some of these are overpriced. It is recommended to have meals at the hotel; however, one can try these restaurants for one meal.

We had our dinner at American Diner, which was obviously a costly affair. The place had on offer, a 5 course dinner for a couple (Valentine’s eve) at a discounted price of Rs. 1000/- (we did not opt for it). The restaurant serves imported drinks. We tried a Vodka brand called Pinky (this is the first time, we heard about this brand). It was ok.