A picture is worth a thousand words but a picture is inadequate in conveying a personal experience and response. Different people are likely to interpret the same picture differently. Words are better than pictures in conveying to another person the original feeling.

The reason I mention this is because I have looked at Gulbarga in still pictures. Life is not a still picture and so is not Gulbarga. The city did not thrill me. When you arrive at Gulbarga you do not feel you are in a holiday destination. Though there is much of fascinating historic interest in Gulbarga, history does not stand in isolation. It mingles with present situation – traffic, pollution, noise, restless crowds and everyday life of common men and women.

Life is full of rare still moments – a moment when time stands still, differences are lost, everything aspires to unity and the scene is permanently etched in memory. It was these still moments that captivated me. It is for these that I will remember this visit to Gulbarga.

Many years ago when on a train journey between Mumbai and Bangalore, the train stopped briefly at Gulbarga. Three women covered in black burquas sat on a bench. Behind them was a bright yellow board painted with the word “GULBARGA” in more than one language. The contrast of the yellow board with black wording and the women in black was striking. I could not see their faces or their smiles. It was only their eyes that briefly met mine. The women were enigmatic and exotic. I knew little of Islam. I had not visited any Indian city with strong Islamic history and heritage. I wondered what would it take for me to know them or for them to know me, because these women were simply a metaphor to the secret stories and treasures of Gulbarga.

Walking through Gulbarga today, I discovered that with so much history, you will understand much but the city will still keep its secrets, making another visit worthwhile.

Dargah is a shrine built over the grave of a Sufi saint. It is a place of pilgrimage. It houses tombs, prayer halls, madrasas and rooms for pilgrims. One of the holiest of such places in South India is the dargah of Khwaja Bande Nawaz, a 14th century saint patronized by the Bahmani kings. In this huge complex, most buildings are white-washed. Although this whitewash hides the historic character of the buildings it keeps a certain neatness of appearance. The general architecture is a harmonious mix of arches, domes, turrets and pointed pinnacles.

Many buildings have multiple tombs neatly covered in cloth and strewn with offerings of flowers. The main shrine of the saint is opulently decorated on the inside with mirrors and mother-of-pearls. The tomb itself is enclosed within a decorated wooden paritition. Ancient coloured lampshades hang above this partition. An adjacent building housing the tomb of another saint has beautiful wall murals that could do with better maintenance.

Unsure of the customs, I did my part as best as I thought fit. As I entered the courtyard, I found pilgrims washing their feet, arms, head and neck around a tank before moving further into the complex. I did the same.

Some patience will allow you to observe the rituals of offering and prayer. Cloths are laid over the tomb. Handfuls of loose flowers are sprinkled over the covered tomb. An interlaced garland of flowers is unwound, spread out and laid on the tomb. There is soft muttering of prayer. There is no priest to intercede. Prayers and offerings are performed directly by those who seek blessings. Some helpers at the dargah assist. A broom of peacock feathers is brushed over one’s head as a blessing. The butt end of the broom is then tapped against the back of shoulders as a final ritual. Pilgrims leave the tomb of Khwaja Bande Nawaz by the same entrance by walking backwards as a mark of respect.

Women are not allowed inside the saint’s shrine, although I found little girls (possibly those who haven’t attained puberty) allowed inside. Women stand as outcasts at the entrance. Although a Hindu, I was allowed inside. I felt that these women, with genuine prayer in their eyes, deserved it more than a curious tourist that I was.

Flower sellers make good business. There is intense competition. The approach of a pilgrim will immediately trigger a cacophony of calls from all the vendors.

All these are minor experiences in comparison to the single image of the dargah that remains powerfully with me. From a closed courtyard, I am looking at a white wall with a little doorway that leads into the complex of the main shrines. Some domes and turrets, all whitewashed, peep from behind the wall. The sky is blue. The afternoon is still. No birds are to be heard. The sound of pilgrims is not heard. The habitual pleas of opportunistic beggars are silent. The scene is pure white against blue with a little touch of green at the doorway. Suddenly your mind is free. You realize that life in this passing moment is quite simple and beautiful.

Nothing impressive remains of the fort itself except the wall and its line of crenellation. This wall houses within it the citadel, the Jamia Masjid, a handful of houses and mostly unused land overgrown with throny shrubs. The citadel is perhaps as you would expect – thick walls, round reinforced corners and a single approach to the top. When you approach the top, you are taken by surprise. Here is an opportunity to see a neat display of crenellation and the perspective it creates. Elements of ancient military architecture are seen bare. A couple of cannons lie quietly. Suddenly you are in touch with history. 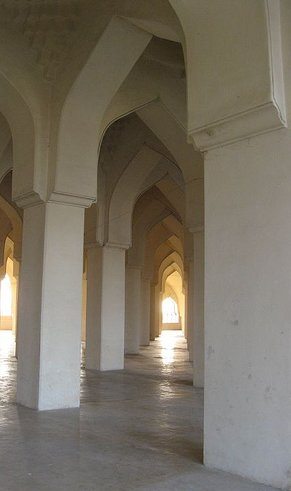 This mosque located inside the fort has a multibay prayer hall. North-South it has 9 bays and East-West it has 13 bays, elegant arches forming each bay. Unlike the mosque at Ibrahim Rauza at Bijapur, these bays are narrow except for the ones on the sides. A common perspective is to see a line of arches aligned and diminishing into the far end. The more stunning perspective is to look diagonally. An arch in one direction alternates with another in a perpendicular direction, creating a zig-zag pattern. Because each next arch is at a farther distance from the viewpoint, each one plays a little hide-and-seek with another. Nearer to the viewpoint, we see the pointed ends of arches but in the middle distance and beyond these points disappear. The effect is that in the far distance, elements from two different arches form an asymmetric arch. It is a 2-D arch created by a flattened perspective.

Snapshot#5 – Chor Gumbad through the smoke 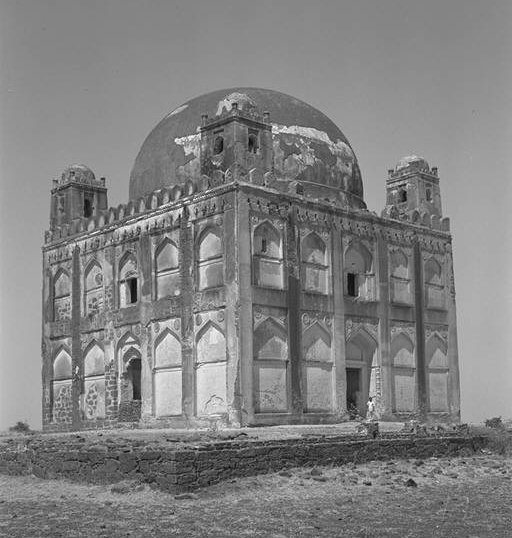 I first saw this from the citadel, an impressive structure situated on a hill. It stood solid through the hazy and bright afternoon sky. I missed a turn to this 15th century tomb ending up walking a much longer route. The final approach to the tomb led me to a large open space, perhaps four football fields, where a number of small fires were burning. It appeared to be the dumping ground for the entire city of Gulbarga. “No proper system of waste disposal,” I thought. Here was open air incineration of all wastes and this ground was also a landfill. A number of scavengers were sifting through smouldering fires to see if there was anything useful they could retrieve. So at least a primitive and ad-hoc recycling was in place.

Very few visit this place. It is a little out of the ordinary tourist trail. Chor Gumbad stood behind the passing clouds of smoke, abandoned almost like the city’s garbage.

On the way to Chor Gumbad, I passed a nondescript monument. The dome of the monument was missing. This made it a beauty because I was able to appreciate the bare elements of architecture. On the outside, it is like a cube with entrances on three sides. One side, to the West facing Mecca, is a solid wall, as is normal in many monuments of this nature. This is called the mihrab. On the inside, it is an octagonal structure from which the dome is supposed to rise up. Thus, on the outside it is rigid and solid, while on the inside it is graceful and unified. The missing dome meant that this afternoon, the usually wide and limitless sky was framed by a circular ring of medieval stones. The clouds came and went in slow moments. The sky stood finite and framed. How can I know how wide is this universe? I can only see what the framed sky shows. 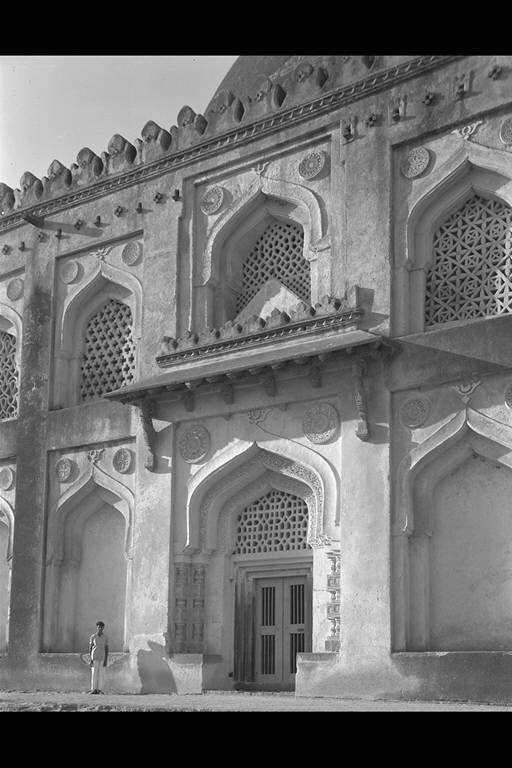 Haft Gumbaz, or more commonly called Saath Gumbaz, is a collection of seven mausolems. When I visited it at lunch hour it was closed and I had to revisit it in the evening just before sunset. Although I enjoyed visiting it, on the whole it was a disappointment because the mausolems were all locked. I could see only the exteriors.

This complex has the tomb of the 3rd Bahmani Sultan, Mujahid Shah (1375-78) and also the Firoz Shah (1397-1422), the last to rule from Gulbarga before the Bahmani capital shifted to Bidar. Firoz Shah mausolem is a unique rectangular structure with two domes, rather than one. The exterior is divided into two tiers with graceful repetitive arches. The lower tier is composed of solid ones while the upper is of open window tracery. Tracery is of varied patterns. Some windows come with low corbelled parapets. One other mausolem in this complex has twin domes but with plain outside walls. Interestingly, some mausolems walls have a slight inclination giving them the energy of upward movement, as if they mean to converge to a point above the dome. Surrounded by these seven mausolems, history comes alive.

Snapshots of Gulbarga was last modified: October 1st, 2019 by Arvind

This is my first post here at Ghumakkar.   It is about our recent visits to Satara.  Satara is a nondescript small town at approx….