No human soul lives around the valley though it is not soulless completely! The valley remained unknown to the world until 1931, when arrived there like Alice in Wonderland, six British Mountaineers, who lost their way while returning from a successful expedition to Mt Kamet. Numerous wild flowers cover the Valley in monsoon and create a magical sight of a wonderland. Frank S. Smythe, one of the six British mountaineers, while mentioning about the Valley wrote, “it was impossible to take a step without crushing a flower”. They named it the Valley of Flowers and thereafter the valley has become a popular place for summer expedition.

Along the Ganges, the road from Rishikesh goes 70km ascending all the way to Devprayag. Prayag is the confluence of rivers. Devprayag is the place where river Bhagirathi and Alakananda meet. From this point of convergence, river Ganga takes its name and flows downward.

A small hamlet about 10-12kms before Devprayag

Originating from Gomukh, river Bhagirathi is flowing down from the left (in the photo below), meets here with river Alakananda which is flowing down from the right (in the photo below) from Satopanth Glacier above the Badrinath valley. Devprayag is one of the Panchaprayags (five confluences). All five prayags fall on the road which goes to Badrinath or Valley of Flowers.

Dhari Devi Temple: On this road ahead, falls the next confluence called Rudraprayag.  We reached a village called Kalyasaur which is located 19 Kms before Rudraprayag. This place is famous for a very pious temple of Goddess Kali also known as Dhari Devi. The entry gate of the temple lies along the highway to Badrinath, and a narrow path down to the river Alakanada took us to the temple.

Entry Gate of Dhari Devi Temple along the Badrinath Highway

Construction of this temple is yet to be finished though visitors are allowed to worship. Photography inside the temple is prohibited. But the image of Goddess Dhari Devi is wonderful to behold. On our way back, we visited a small temple of Bhairo Baba which lies along the same path.

The next prayag to come was Rudraprayag! We set off again and soon reached there. It is the confluence of river Mandakini and Alakananda.

Our Journey to Rudraprayag along the river Alakananda 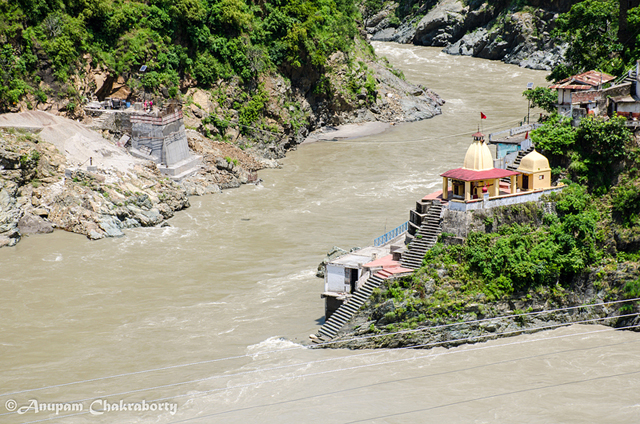 Originating from Kedarnath, river Mandakini is flowing from the top (in the photo above) and meets here with Alakananda which is flowing down from the right.

The prayag next we reached was the Karnaprayag. It is the confulence of river Pinder Ganga and Alakananda. 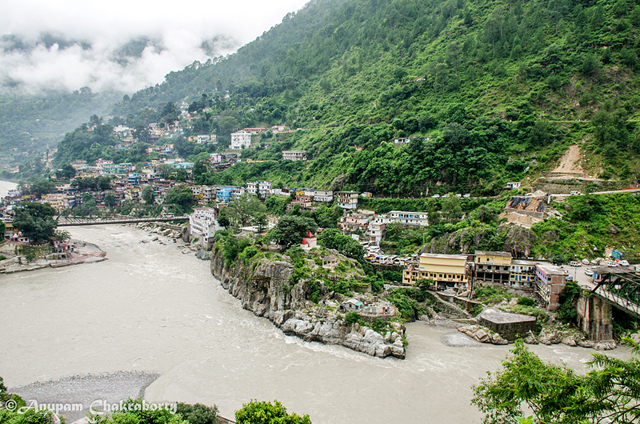 Originating from Pinder Glacier in Bageshwar, river Pinder Ganga is flowing from the top (in the photo above) and meets here with Alakananda which is flowing down from the left. These two rivers meet at a place which does not allow an easy click of the confluence. We climbed to many high points and at last found a place to capture the confluence. 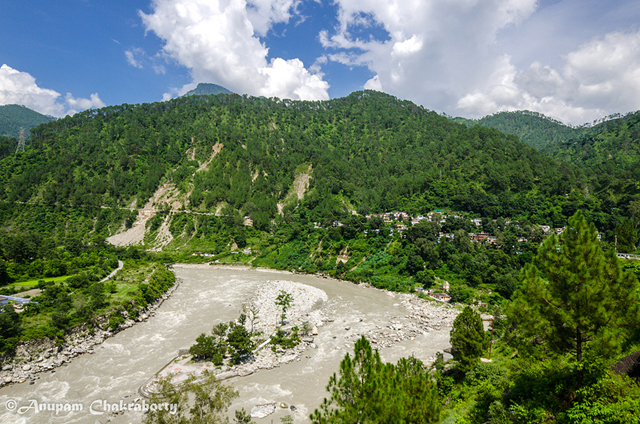 We continued our journey gazing the scenic Himalayan beauties. The beautiful village ‘Gopeswar’ on a mountain top held us for a moment before we proceeded further. The scenic road continued ascending all the way to a beautiful mountain village called Pipalkoti. 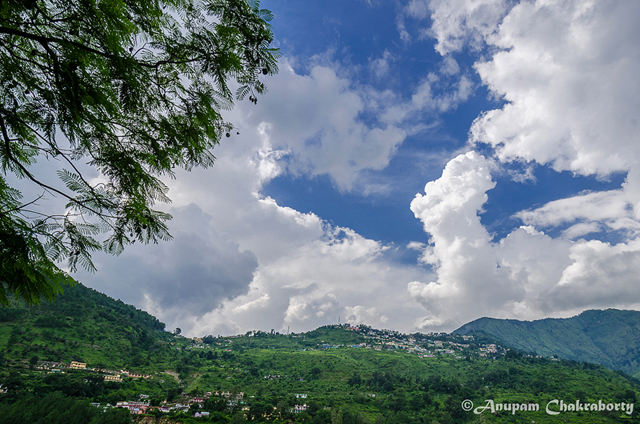 A view of mountain village Gopeswar

When ‘Joshimath’, our destination for the night stay, was only about 14 Kms away, we saw a perfect Z-shape road ascending towards it. Climbing all the way through the Z-shape road and crossing the beautiful waterfalls we reached Joshimath at 06.15pm. We checked in the Hotel Kamet. It is an average hotel with basic amenities and its super deluxe room cost us Rs.1100/-. 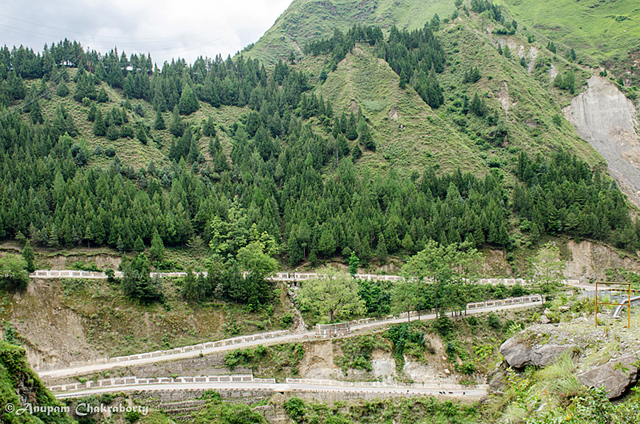 A z-shape road to Joshimath

A beautiful waterfalls along the highway 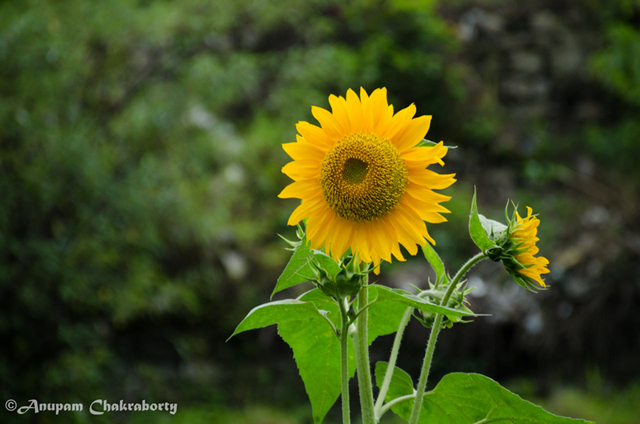 I clicked this sunflower at Joshimath

It was 6.30 in the next morning; we set off our journey to Ghangaria which is the base camp for Valley of Flowers. The nearest motor head to Ghangaria is Govindghat which lies at a distance of 24 Kms from Joshimath and falls on the road to Badrinath.

Yesterday, we saw four prayags. The fifth one was not too far from Joshimath and we arrived soon at the ‘Vishnu Prayag’. It is the confluence of Dhauli Ganga and Alakananda. Dhauli Ganga is flowing from Dhaulagiri Mountains (on the bottom right in the photo below) and meets here with Alakananda (flowing from the top right). 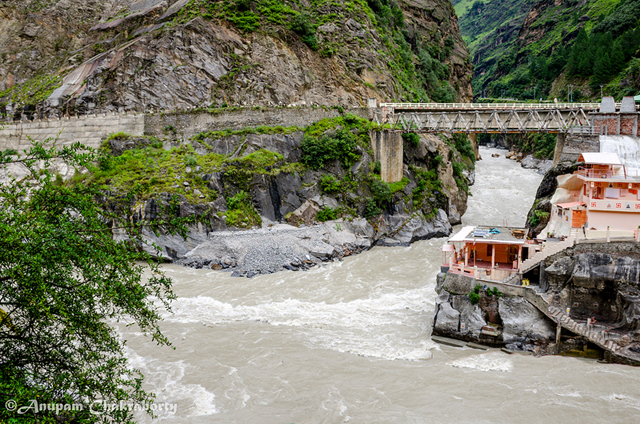 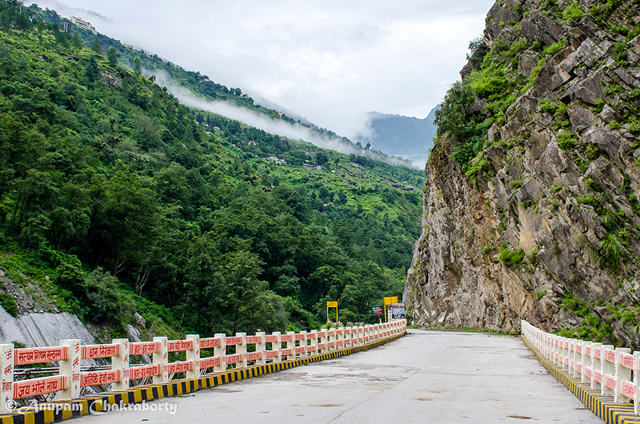 A bridge on the river Alakananda at Vishnu Prayag

Trek to Ghangaria:  We soon reached Govindghat. From here, these days, an off road goes 3Kms to a village called Pulna. We preferred to cover the distance by local Jeep. 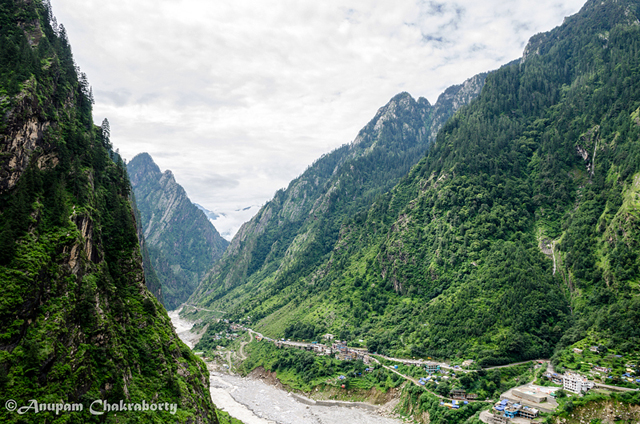 The road bifurcates here. The straight road goes to Badrinath and the one going down to a settlement is Govindghat. 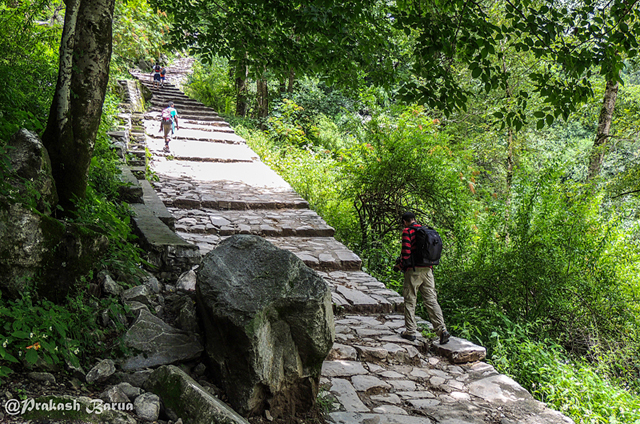 The serene trail to Ghangaria

The hikes on the trek to Ghangaria were five times more than those small descends. But each hike came with an inspiration to enjoy the return journey through a relaxing downhill. With such a great inspiration we were climbing each ascend and were greeted with lesser oxygen due to the gain in altitude. Nevertheless, when your destination is a magical land, the Valley of Flowers, you accept everything whatever comes on the way! So for a little less than five hours we enjoyed (Oh really!) the hike of 14 Kms to Ghangaria and retired early to bed with a hope that the Valley would greet us tomorrow with lots of flowers on its alpine meadow. 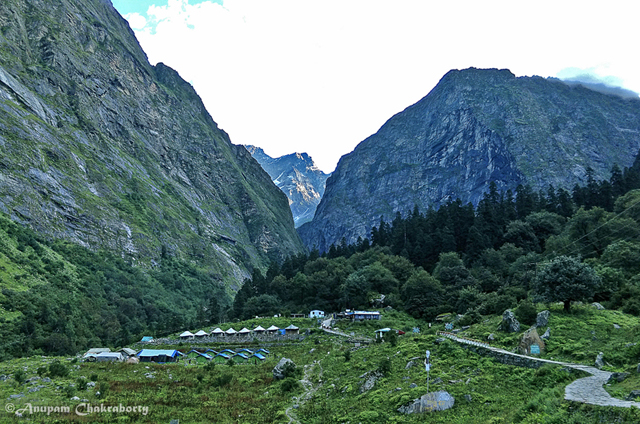 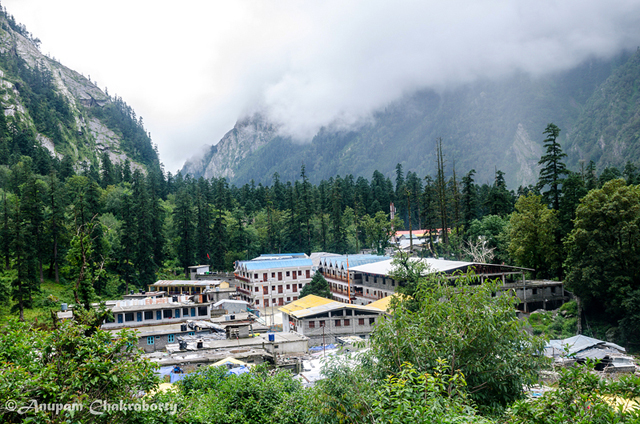 Ghangaria, the beautiful base camp of Valley of Flowers.

The difficulty level of this trek from Pulna to Ghangaria is between easy and moderate.

The Road To Valley of Flowers was last modified: March 8th, 2022 by Anupam Chakraborty

To start with number one in my list is Bade Miyan , situated in the by lanes of Colaba and is behind the famous Taj Hotel. Actually it is not located behind the Taj Hotel but is in front of it , because the main entrance  of the Old Taj is located in the back side of the hotel .  Bade Miyan is mainly famous for the Non- Veg  food , it serves Mughalai cousin , though they have got a section of Veg food also .It is a highly popular food joint in south mumbai but  there is no availability of good seating area , one has to wait for around Twenty minutes standing beside a occupied table , kept on the footpath , sometimes it becomes irritating but after having the delicious food every shortcomings are forgotten.

Now the point where to start the feast and I will recommend Seekh Kawab, the softest Seekh Kawab I ever had in my life. They are grilled on the Charcoal fire and served hot, the shine on the surface due the juices flowing from it reflects the quality served. I bet you cannot stop with one plate of the Seekh Kawab and end up having couple of them.