The last seventeen days seem like a decade. We met everyone, explored some places, did things which were part of my life at some point in life, but not able to carry on due to so many untold reasons. Still, there is a feeling of little unfulfilled, as we skipped many things in our wish list. It is just not possible to do all these things in those few days and finally, we reached at Sealdah station to catch Sealdah Duronto for Delhi on June 24th. We still had a couple of hours in our hand and wanted to utilize the time available, to spend some time in my beloved city, knowing the fact that next trip would not happen before winter this year.

Kolkata represents a city full of life and a city of dreams where India’s true art and culture is alive. The city had several Nobel laureates (Sir Ronald Ross, Rabindranath Tagore, CV Raman, Mother Teressa and Amartya Sen), who were closely associated with Kolkata and Satyajit Ray became the first citizen to win Oscar in India. Once you are in the city, you can feel this cultural vibrancy of this city without trying very hard. With its baggage of history, culture, art, architecture, the city holds a special place to all of us, as well as to it’s visitors.

The City of Joy, Kolkata is also synonymous with the great magician P.C.Sorcar (Sr.) and his son P.C.Sorcar (Jr.), Eden Garden, Moidan and football, Victoria Memorial, the Hooghly river and its’ bridges i.e. iconic Howrah Bridge and Vidyasagar Setu, the rikshaw pullers, the celebration of Sarbojonin Durga Puja. The list can just go on and on. 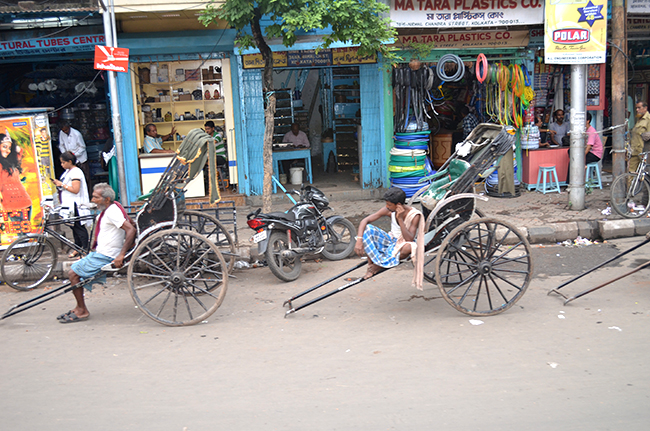 A much needed break!

The city is also synonymous for the iconic tram services. We thought to have a quick ride in the tram for my son, who was pressurizing me for a ride for the last few days. So, in this concluding post, I will take you through a journey to get a taste of the city’s heritage. The tram is the first mode of public transport in Kolkata, which has become a part and parcel of the history and culture of the city. It is the only city in India which has a tram network which gives the city the feel of that old world charm. 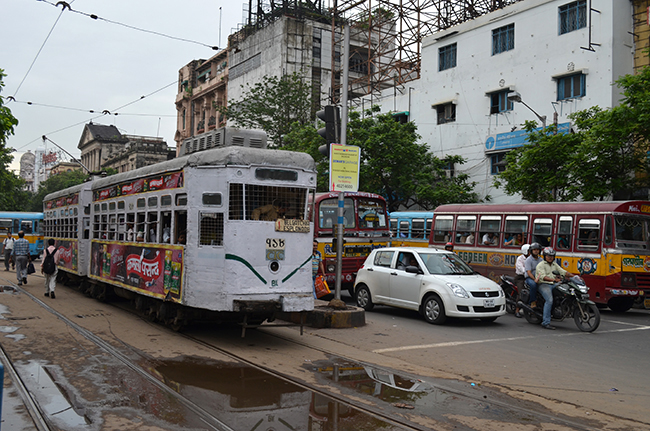 The Kolkata Tram is the oldest operating electric tram in Asia, running since 1902. However, the journey of Kolkata Tram begun in February 1873 when the first tram rolled out on the tracks in the city.

In 1870 the Justices of Peace (in charge of developing the city) proposed laying of tram tracks for transporting vegetables and other goods from the rural suburbs through Sealdah Station to other parts of Calcutta. The report submitted by the Justices proposed that tram tracks may be laid from Sealdah through Bow Bazar to Armenian Ghat, Ahiritollah Ghat till Chitpore Bridge via Sovabazar and beyond BagBazar. However, Bengal Government gave their permission for laying tracks till Armenian Ghat only at an estimated cost of Rs one lakh. Armenian Ghat was chosen as the terminal destination because it housed the ticket counter of East India Railways. In 1873 the first tram tracks were laid at a cost of Rs 2.5 lakh from Sealdah to Armenian Ghat via Circular Road, Bow Bazar Street, Dalhousie Square and Strand Road.

The services were discontinued after 11 months. It was initially conceived for the purpose of transporting goods from Sealdah to Armenian Ghat, the nearest point to Howrah Station across the river.

In 1880, the Calcutta Tramways Co. Ltd was formed and registered in London on 22 December and begun its services with horses hauling tramcars. Metre-gauge horse-drawn tram tracks were laid from Sealdah to Armenian Ghat via Bowbazar Street, Dalhousie Square and Strand Road. The route was inaugurated by the Viceroy, Lord Ripon, on 1 November, 1880, followed by steam tramway lines in 1882.

By the end of the nineteenth century the company owned 166 tram cars, 1000 horses, seven steam locomotives and 19 miles of tram tracks. Electric trams began to ply on the tracks of Kolkata in 1902 and the first electric tramcar in Asia ran from Esplanade to Kidderpore on 27 March, 1902.

Tram was the chief and cheap mode of transport for the people of this city and still popular among the people who want a safe and cheap system of transport without much inconvenience. It is the lifeline of the city that catered to elders, school going children, office goers and to the visitors. However, with the passage of time, shrinking road space, non-viable routes and ongoing construction works around Kolkata, the importance of tram diminished. 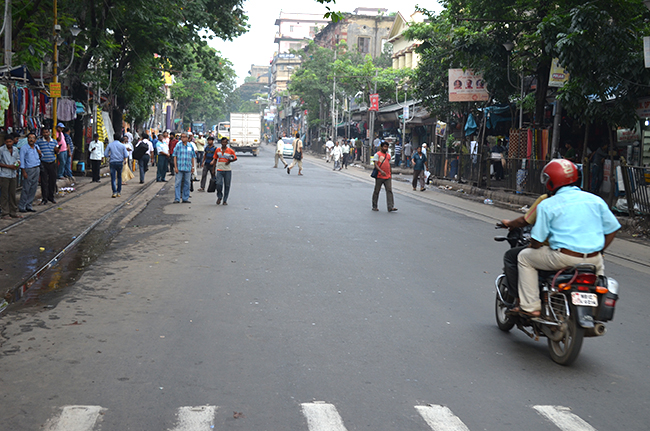 There were several attempts to revive the Kolkata tram and keep the heritage of the city alive over the years. The authorities had started experimenting with its models in view to make it economically sustainable. Modified electric tramcars were introduced that sported a new look a few years back with polycarbonate transparent body, spacious interior and large open windows.

The inside of the tram coaches is almost like a bus. There is a conductor who collects the fare and issues a ticket and pulls the rope to signal the stop. There are huge fans which offer some respite to the passengers from the sweat and heat. Ladies usually occupy the backside of the coach of the tram. Some A/C trams are also pressed into service to make tram journey comfortable.

Inside of a Tram in Kolkata

The Calcutta Tramways Co. Ltd. (CTC) is one of the biggest loss making company in India for several years. Trams are often looked upon as a slow-moving mode of transport, stalling faster movement of traffic and eating away vital road space. However, our hearts don’t want to consider Kolkata tram only into a profit making center, but it’s about heritage of the city. There are efforts to save the rich and unique heritage of Kolkata and it is one of them.

The Recently, West Bengal Tourism Department along with Calcutta Tramways Company (CTC) launched its first single coach air-conditioned mobile cafeteria tram to get a taste of the city’s heritage while seated comfortably in plush interiors. You can enjoy a special joyride in the city in Kolkata’s heritage mode of transport. The new AC tram will feature several modern facilities including LCD screen, where cultural programmes on Tagore songs and drama, folk music will be played, Wi-Fi mobile charger etc.

On the itinerary for the north Kolkata trip are the iconic Jorasanko Thakurbari (Rabindranath Tagore’s ancestral home) and Nakhoda Masjid (city’s principal mosque), while the sprawling Maidan and the famous Victoria Memorial can be seen in the afternoon tours. Starting off in the heart of the city at Esplanade, passengers are provided meal. The tram also makes a brief stop-over at the Maidan.

Whether the new initiative will be successful or not is a different story, but it will be sad if the city tries to do away with trams, which is non-polluting unlike other forms of road transport, when major European and South Asian countries are trying to revive the trams which they had discarded. The West Bengal tourism department will have to play a major role, so as the people in Kolkata and a traveler like you.  The tinkling bells of tram cars will surely bring back the romance and nostalgia of the city’s past, just like old DTC buses in Delhi. 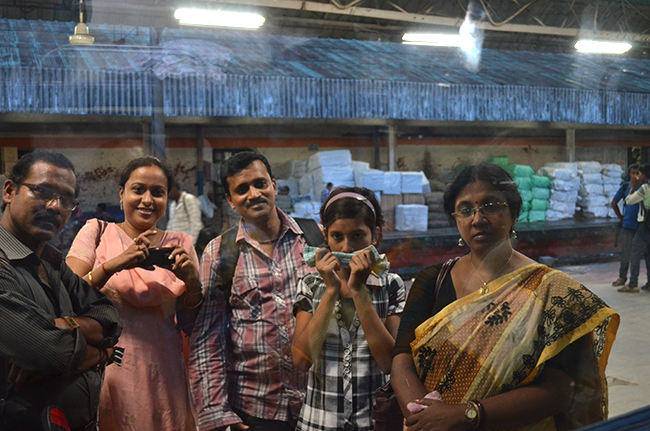 Thank you for such a wonderful time. See you soon.

The train left the station on time, we were also leaving the city, our home and everyone for one more time with a promise to come back soon. “Pujor samay aschis to!” Hope to see you again during Puja. Yeah…will try…and there were few drops…there was a complete silence inside the compartment and all of us knew that it is again running against time and deadlines to meet for the next few months. For me, ‘Kajal’ will no more exists in this part of this world…only ‘Amitava’. As we flip through the numerous pictures taken during our stay at home, we all felt happy. There is no summer camps in this world which can offer and teach some basic lessons in life to our child in such a way.

Thank you all for your continuous encouragement throughout the past one month and sometimes I might have shared some pages from my personal diary with all of you. Hope you like some of these posts, as I did while bringing these to all of you. Do make a plan to visit the city whenever you have time or explore the city whenever you are happen to be in the city. It’s a beautiful place to visit where humanity still exists. I do look forward to hear from your own experiences, as well as eagerly waiting to read your travelogues in various parts of the world.

See you again with some new places.